It’s a tragic instance of deja vu for Alyssa, who lost her first son, Dylan, to the same disease a decade ago.

With Charlie and Kolton, however, Alyssa knew they had the disease by the time she was 21 weeks pregnant. She was armed with knowledge that, if they got it in time, an experimental treatment might save the twins.

And, with five months to go before her due date, it seemed that time was on Alyssa’s side.

But working against her and the medical team that quickly pulled together for Charlie and Kolton were a tangle of regulatory snags, a controversial new law, an impossibly tight timeline and a polar vortex.

Twins Charlie and Kolton Martin suffer from Menkes disease, the same inherited neurodegenerative disease that killed their older brother at just two a decade ago. Through the ‘right-to-try’ law, they have started an experimental treatment, but received it at the very last moment

With the prospect of a new child (or two, or more) comes endless questions about who and how they will be and gleeful anticipation of meeting them – but it’s also harrowing for every expecting mother.

But as soon as Alyssa found out she was having not one, but two boys, she had a unique and grave concern.

Hidden in Alyssa’s genetic code is a defect that has no meaningful effect on her.

But she carries a mutation that causes Menkes disease on one of her X chromosomes.

Since females have two X chromosomes, the second copy of the gene overrides the broken one in Alyssa and her healthy four-year-old daughter, Natalie.

Boys, on the other hand, have just one X chromosome (and one Y), so their chances of having any disease carried on it are far higher.

Neither Alyssa, nor her doctors, knew or had any reason to suspect this when she was pregnant with her first child, Dylan, over a decade ago.

For the first three months of his life, Dylan seemed like a typical newborn boy, with the possible exception of his fair, brittle hair.

But suddenly he started suffering seizures, and soon stopped eating. His bones became even more brittle than his hair.

Doctors ran genetic tests on both Dylan and Alyssa. They discovered the Menkes mutation in Alyssa’s genome.

It’s not clear how many women carry the unexpressed gene, but about one third of them have no family history of the disease, as was the case for Alyssa, she learned after the adopted 36-year-old tracked down her biological family.

In these instances, the mutation is thought to occur spontaneously, according to the National Institutes of Health (NIH).

The condition affects about one in every 100,000 babies born and keeps the body from properly processing and allocating copper from food to the body which, in turn, devastatingly delays neurological development and growth.

There is no treatment approved by the Food and Drug Administration (FDA), but a 2014 study suggested that treating newborns with Menkes by replacing the mineral using copper histidine therapy within the first month of their lives might increase their survival chances. 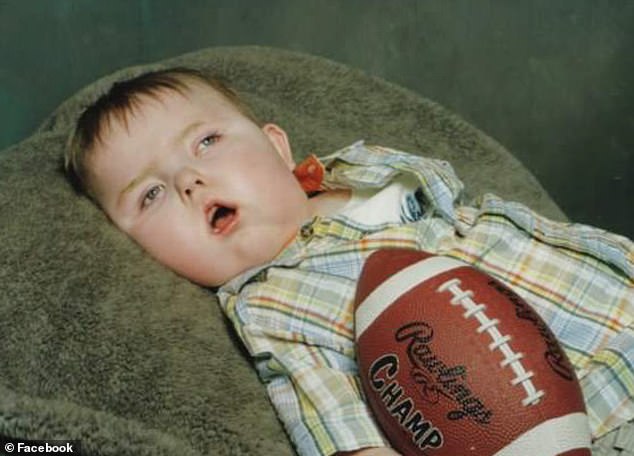 Dylan Martin died a decade ago, just after his second birthday after battling Menkes disease. He was never able to hold his head up on his own, despite receiving treatment at four months

Alyssa and her doctors didn’t realize that Dylan had Menkes until he was already three months old. They started him on the experimental copper histidine as soon as possible, but he was already four months old.

Despite the treatment, Dylan never got strong enough to hold his head up, stopped eating by the time he was five months old, and spent the rest of his short life on a feeding tube.

Eventually, he couldn’t even breathe without a respirator. Dylan hung on until his second birthday, but died shortly thereafter.

When she found out that the twin boys she was carrying had the same disease that took their older brother from her, Alyssa was ‘devastated,’ she told Daily Mail Online.

‘I started crying and [mentally] went straight back to my first one that passed away from it and thought worst case rather than thinking more positively about how the outcome should go.’

But, Alyssa gathered herself, and decided to use the advantage of an earlier warning to make sure that her sons got the best chance they could – even as she was preparing herself for the worst.

That meant scheduling an appointment with a geneticist, Dr Amy Calhoun, and getting her sons copper histidine as soon as possible.

For a 2014 study, NIH researchers started giving 35 babies born with Menkes injections of copper histidine within their first month of life, and compared how they progressed to a group of babies who didn’t start the treatment until after their symptoms began.

They followed the children through age three. The ones that got the treatment before their symptoms appeared fared better: 71 percent survived those three years, their heads grew more and their cognitive development was measurably better.

Only 50 percent of the control group survived those first three years.

Copper histidine certainly wasn’t a sure-fire cure, but certainly offered some hope, especially if babies got it early.

There was no way of knowing if Dylan got the experimental treatment too late, or if it simply didn’t work.

So Alyssa and Dr Calhoun quickly got to work figuring out how to get Charlie and Kolton the treatment as soon as possible.

The FDA has not yet approved copper histidine – nor anything else – as a Menkes treatment. And there weren’t any ongoing clinical trials to enroll the boys in. 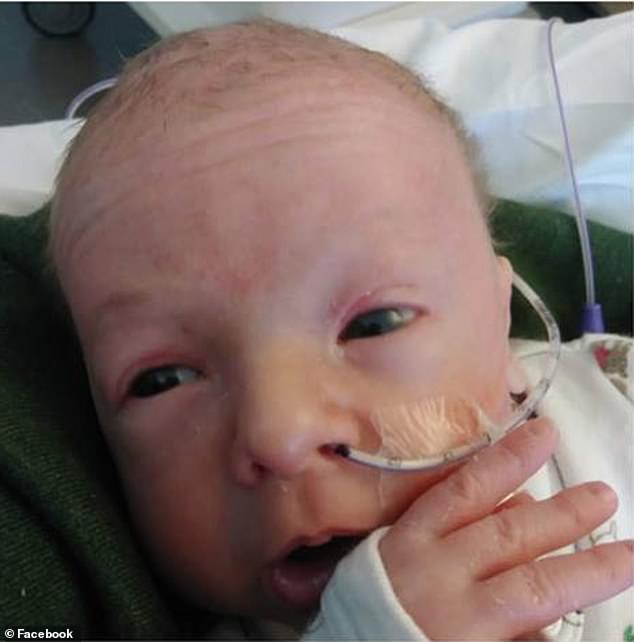 Menkes strikes boys almost exclusively, and they are often born premature, with very fair, brittle hair like Kolton and Charlie have

In January of last year, the so-called ‘right-to-try’ law was passed, creating a pathway for terminally-ill patients to try experimental treatments before the FDA has approved them.

It was touted by President Trump, has been seen with skepticism by doctors and patient advocates worried it will just be a boon for selling bad science to vulnerable patients, and met with gratitude – and then frustration – by patients who desperately wanted the right to try any treatment, then still struggled to actually get any.

For the Martin family, it was the only hope.

Even then, the timing was bad. Charlie and Kolton were born seven weeks early on December 17 – just before the holidays and (unexpectedly) the government shutdown.

Because the boys had been born premature, doctors decided they should wait a little while to star the intensive therapy, but, still, the clock was ticking, and Dr Calhoun scrambled to complete an application on the Martin twins’ behalf, Stat News reported.

In the end, it wasn’t even holidays or the government shutdown that delayed the approval and delivery of the treatment. It was more bad timing, according to Stat.

Dr Calhoun and Alyssa’s application happened to coincide with a sort of changing of the guard. The  NIH was handing the oversight and study of copper histidine over to a private company, causing a bit of a paperwork storm.

Meanwhile, another storm was brewing, and temperatures across the US, including in the Martins’s home state of Iowa, were dropping far below zero, meaning the courier meant to deliver the treatment was called off the job the day it was finally set to arrive.

In the meantime, Dr Calhoun made a snap decision to start the twins on copper chloride, which could – and did – cause painful welts at the injection sites, in order to start getting their copper levels up. 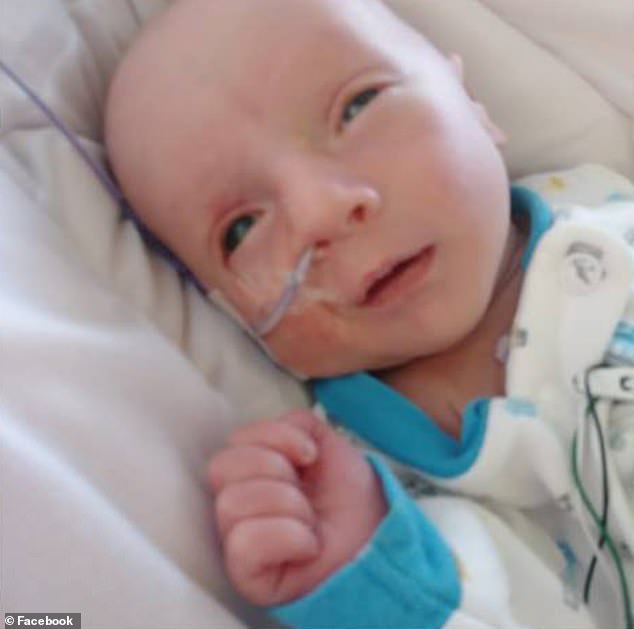 Alyssa and the boys’ doctors won’t know if treatment is working for another couple months, but she says that they have had promising gains in their copper levels

‘It was kind of torture,’ Alyssa said.

‘They have to have [copper histidine] in the first 22 days or so for it to be most effective, and we kept bumping the day [to start histidine treatment] back, and they were so little we thought it’d be okay to just get their levels up, but as we got to those numbers like 28 days, it was real close.’

So far, Charlie and Kolton seem to be doing remarkably well. Their copper levels have shot up to where the doctors hoped to see them. They cry for bottles and gulp down milk, and neither has had any seizures, a common first sign.

Alyssa is hopeful, but always watchful and wary.

‘They’re still kind of young, so we haven’t seen any changes yet,’ she says.

‘It usually takes about three months when [changes] start showing up. I’m hoping for the best, but still watching to see if they have any seizures.’

Most likely, the boys will have to remain on the copper treatment for the rest of their lives, if it works.

Alyssa hopes they might a have a shot at a normal life, but for the moment, she’ll settle for simpler goals.

‘My son [Dylan] could even hold his head up, and I want that [ability] for these ones,’ she says.