Twitter worked with the Pentagon to promote fake accounts in the Middle East which praised U.S. policy, it has emerged – despite the social media company insisting that it made ‘concerted efforts’ to ‘detect and thwart government-backed platform manipulation’.

The collusion spanned at least four years, from 2017 to 2020, and saw top Twitter executives liaise with military intelligence on ‘a covert online PsyOp campaign’ – promoting accounts including one that claimed the U.S. drone bombings in Yemen killed only terrorists.

The revelations were made by Lee Fang, who on Tuesday published the eighth installment of what is termed the Twitter Files. 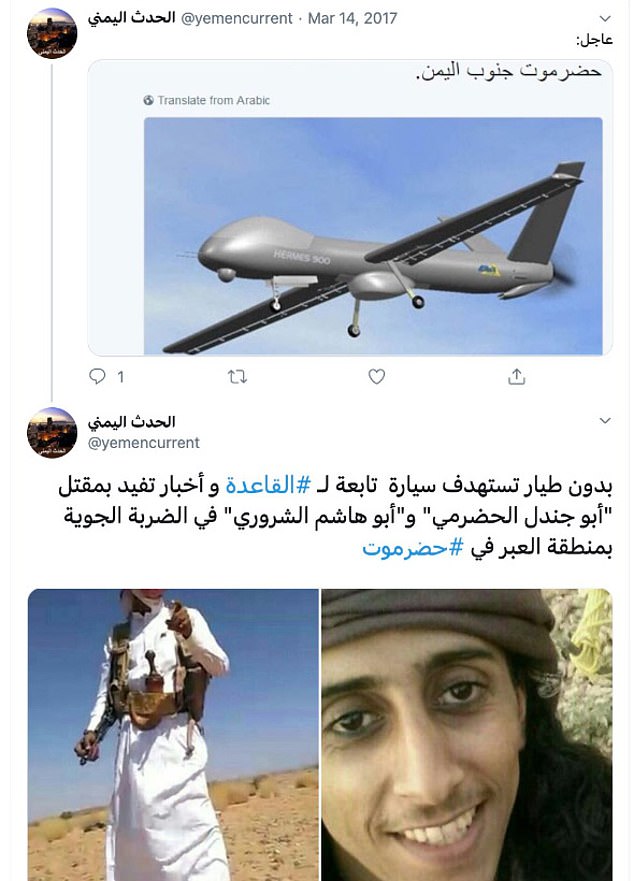 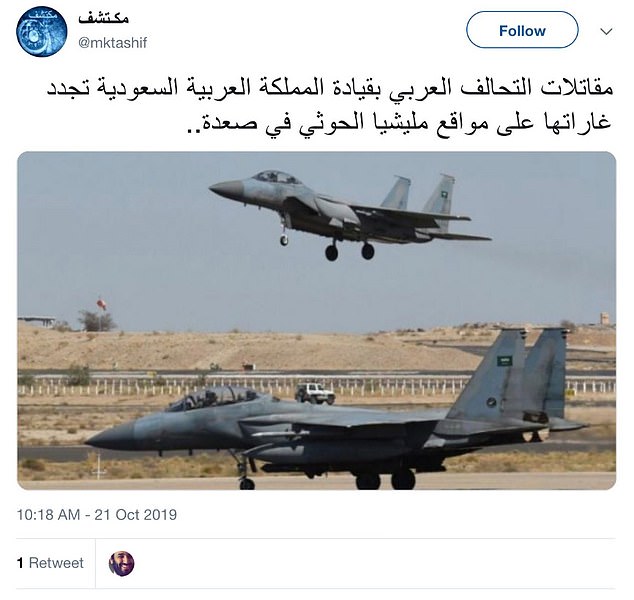 Twitter accounts promoting U.S. policy in the Middle East were controlled by the Pentagon, and boosted by the social media company on the Pentagon’s request

Fang, a San Francisco-based journalist who writes for The Intercept, is following on from stories published by reporters Matt Taibbi and Bari Weiss since the beginning of the month.

‘Despite knowledge that Pentagon propaganda accounts used covert identities, Twitter did not suspend many for around 2 years or more. Some remain active.’

Fang pointed to emails showing that the cooperation with the Pentagon began at least five years ago.

An official from U.S. Central Command, CENTCOM, wrote to Twitter executives on July 26, 2017. 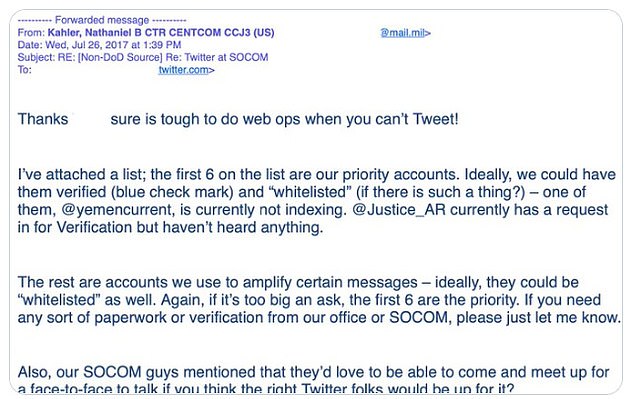 Fang included screenshots of an email from a CENTCOM official, asking for special attention for accounts they managed in their ‘psy ops’ work

Nathaniel Kahler asked the executive, on the public policy team, to approve the verification of one account and ‘whitelist’ a list of Arab-language accounts ‘we use to amplify certain messages.’

Kahler wrote: ‘We’ve got some accounts that are not indexing on hashtags — perhaps they were flagged as bots.

‘A few of these had built a real following and we hope to salvage.’

Kahler added that he was happy to provide more paperwork from his office or SOCOM, the acronym for the U.S. Special Operations Command.

At the time, according to sources who spoke to The Intercept, Twitter was working to flag as spam any accounts that engaged with extremists, in particular those affiliated with the Islamic State.

Kahler sent a spreadsheet to the Twitter team with 52 accounts, and asked for ‘priority service’.

Among the accounts singled out for preferential treatment was the since-deleted @yemencurrent, which claimed that U.S. drone strikes were ‘accurate’ and killed terrorists, not civilians.

The account also praised the U.S. and Saudi-backed assault on Houthi rebels in that country.

On the same day that Kahler sent his request, Twitter engineers discussed setting up a separate tag for the accounts – a move Twitter insiders told Fang was highly unusual.

Kahler told Twitter the accounts would all be ‘USG-attributed, Arabic-language accounts tweeting on relevant security issues’ – but many of the accounts did not in fact mention that they were being run by the U.S. government.

At least one of the accounts, @mktashif, now deleted, was a ‘deep fake’, with a computer-generated profile picture and AI-manufactured content. 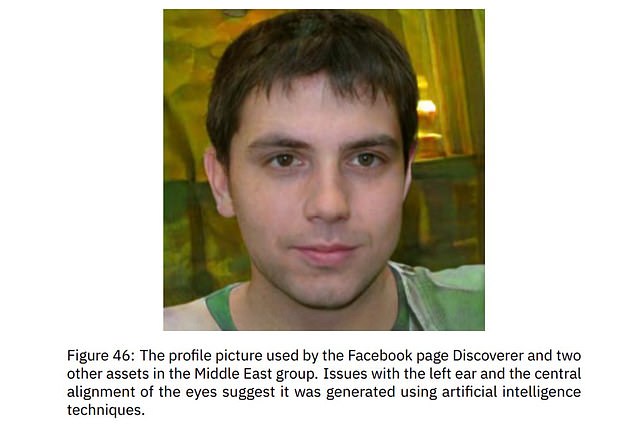 The profile picture for the account @mktashif, now deleted, was a ‘deep fake’, with a computer-generated image

The account initially declared its CENTCOM link, but then switched to an Arabic phrase meaning ‘Euphrates pulse.’

The former Twitter employee told The Intercept that they were surprised to learn of the Defense Department’s shifting tactics.

‘It sounds like DOD was doing something shady and definitely not in line with what they had presented to us at the time,’ they said.

As the 2020 election drew closer, Pentagon officials requested meetings with Twitter and Facebook executives in a secretive, secure meeting room.

The gathering would be held in a sensitive compartmented information facility, also known as a SCIF.

‘Facebook have had a series of 1:1 conversations between their senior legal leadership and DOD’s [general counsel] re: inauthentic activity,’ wrote Yoel Roth, then the head of trust and safety at Twitter. 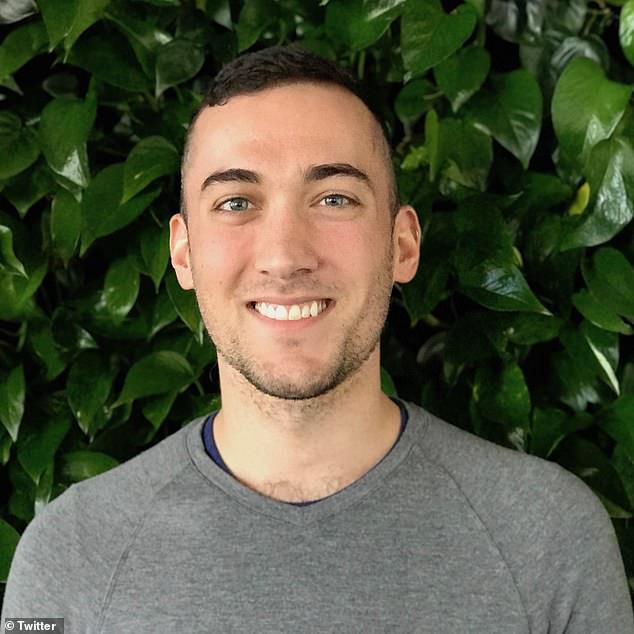 Yoel Roth, head of trust and safety at Twitter, was highly involved in the liaison between the Pentagon and Twitter’s teams

‘Per FB, DOD have indicated a strong desire to work with us to remove the activity — but are now refusing to discuss additional details or steps outside of a classified conversation.’

Stacia Cardille, then an attorney with Twitter, noted in an email to her colleagues that the Pentagon may want to retroactively classify its social media activities ‘to obfuscate their activity in this space, and that this may represent an overclassification to avoid embarrassment.’

Jim Baker, then the deputy general counsel of Twitter, also fired by Musk, commented that the Pentagon appeared to have used ‘poor tradecraft’ in setting up various Twitter accounts and needed to hide their involvement.

Baker, apparently keen to assist the Pentagon, speculated that in the meeting the ‘DoD might want to give us a timetable for shutting them down in a more prolonged way that will not compromise any ongoing operations or reveal their connections to DoD.’

In September this year, The Washington Post published a report into the Pentagon’s activities, but failed to uncover Twitter’s role helping the Defense Department.

‘When the WashPost reported on the scandal, Twitter officials congratulated each other because the story didn’t mention any Twitter employees & focused largely on the Pentagon.’

Fang concluded: ‘The conduct with the U.S. military’s covert network stands in stark contrast with how Twitter has boasted about rapidly identifying and taking down covert accounts tied to state-backed influence operations, including Thailand, Russia, Venezuela, and others since 2016.’