‘Someone show Meghan how to use a baby carrier before Archie drops out!’ Twitter encourages Duchess of Sussex to get advice from the nanny after she goes hiking with baby son and her dogs

Social media users have urged Meghan Markle to get advice from the nanny on how to use a baby carrier after pictures showed her awkwardly handling Archie while hiking with her two dogs.

The Duchess of Sussex looked in good spirits as she walked through the woods just a couple of miles from the oceanfront home where she has spent most of the past two months on Canada’s Vancouver Island.

Holding her two dogs, there was no sign of the drama of Megxit on her smiling face, as she awaited husband Harry who was flying from the UK overnight, so they could start their new life together in North America.

But eagle-eyed Twitter users were less than impressed with how she held her eight-month-old son on her chest in the baby carrier. 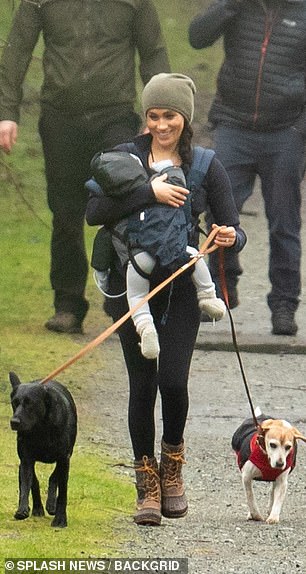 One user said: ‘Archie looks uncomfortable – maybe one of Meghan’s armed guards could give her a hand with the pup…just say’in.

And another said: ‘Not carrying that baby well though.’

And another user said: ‘What a surprise that she’s appeared on the same night the Cambridge’s hold an event at BP!

‘And wtf is going on with the baby carrier?! Poor baby!’

The Duke of Sussex was understood to be jetting overnight to Vancouver to be with his wife and child, after making an appearance at the UK-Africa Investment Summit on Monday. 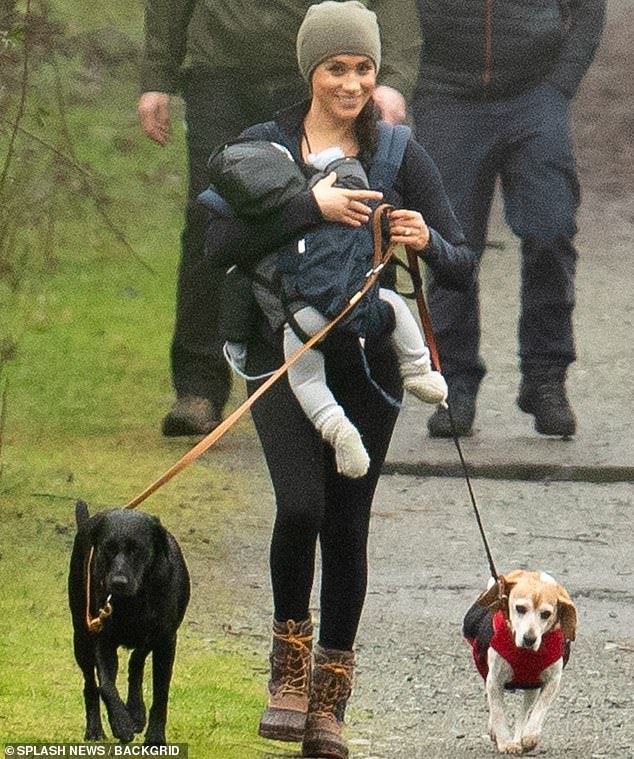 Meghan Markle took son Archie for a walk in the woods Monday morning in Vancouver, Canada

But he missed his brother William’s first solo reception at Buckingham Palace last night where he ushered in a new era for the royals.

It was a stepping stone for William in the long preparation for him becoming king and showcased the royal family’s new order post-Harry, who was on his way to Vancouver to start his new life with his wife and son on Monday.

At the summit reception the Duke of Cambridge was supported by his wife Kate, Prince Edward, his wife Sophie, Countess of Wessex, and Princess Anne as they welcomed 21 African delegations to the Queen’s London home. The Queen and Prince Charles were not in attendance at the reception to mark the UK-Africa Investment Summit.

Despite the drama of the past fortnight, William and Kate were all smiles as they received a line of visiting Heads of State and their partners in the Music Room.

The Duchess of Cambridge put on a dazzling display as she joined her husband at the event on Monday evening, looking resplendent in a glittering £410 red gown from high end high-street store Needle & Thread for the evening reception – a brand also loved by Princess Beatrice.

The Countess of Wessex, who is celebrating her 55th birthday today, looked elegant in a red as she joined her husband Prince Edward, 55, at the summit reception.