Actress Alyssa Milano, who came forward as a sex assault victim last week and sat behind Dr Ford as she testified to the Senate, led a wave of outrage as users queued up to denounce the remarks.

But Trump’s supporters also stepped forward to defend the President, saying that he was merely ‘pointing out inconsistencies’ in her account.

Alyssa Milano, who came forward as the victim of a sex assault last week and sat behind Christine Blasey Ford as she testified to the Senate, hit out at Trump on Twitter

Michael Bromwich, one of the lawyers who sat alongside Dr Ford as she testified, also disparaged Trump’s speech as ‘a vicious, vile and soulless attack’

Writing to Donald Trump Jr, Milano said: ‘Your father is an a**hole. This is the most misogynist display of barbaric insensitivity that I’ve ever seen.

‘This is why I didn’t report. This right here. Women are watching. And we vote.’

Also venting his anger online was Michael Bromwich, one of the lawyers who sat alongside Ford during her testimony.

He wrote: ‘A vicious, vile and soulless attack on Dr Christine Blasey Ford. Is it any wonder that she was terrified to come forward, and that other sexual assault survivors are as well?

However, Ari Fleischer, a Fox News contributor and former White House press secretary, was among those backing Trump.

He wrote: ‘He didn’t mock Professor Ford. He pointed out many of the inconsistencies in her account – something the MSM won’t do, because they’re too invested in attacking Brett Kavanaugh.

‘If the press were balanced, they would have raised the same issues Pres. raised here.’

Star Trek actor Geroge Takei also weighed in, saying that America should be ‘ashamed’ of the President, while fellow star Billy Baldwin called his comments ‘the death of shame.’ 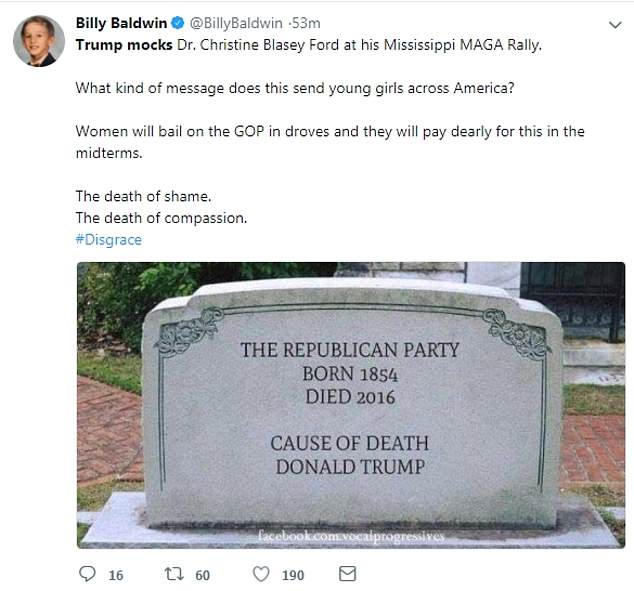 Bill Baldwin also attacked Trump, calling his comments the ‘death of shame [and] compassion’ while predicting that Republican women will desert the party

David Simon, former journalist and creator of The Wire, had some choice words for Trump and his supporters, calling them ‘pigs in s***’

Fred Guttenberg, whose daughter was killed in the Marjory Stoneman Douglas school shooting, also shared his frustration with Trump

David Simon, a former journalist for the Baltimore Sun turned television writer who created The Wire, was also among those criticizing Trump.

Describing Trump as a ‘pig’, he also ripped into those laughing along and applauding in the background as Trump addressed the rally.

‘The trolls who are about to reply to this message by smearing her further? Pigs,’ he added. ‘None are worth the good profanity. Just pigs in s****’.

Fred Guttenberg, the father of Jamie Guttenberg who was killed during the shooting at Marjory Stoneman Douglas high school in Florida, also shared his thoughts.

‘Trump mocks this great country and the Republican party continues to let it happen,’ he wrote while retweeting a post about Dr Ford.

‘This election must result in the return of divided and accountable government.’

Trump was speaking at the ‘Make America Great Again’ rally in support of Mississippi’s two incumbent US senators, Cindy Hyde-Smith and Roger Wicker, both Republicans. 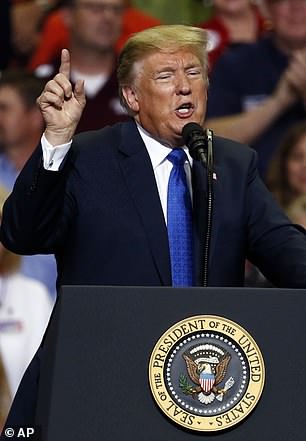 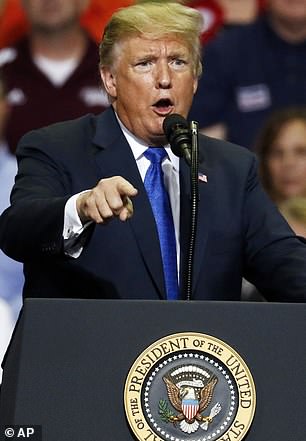 Trump mocked Dr Ford for being able to remember specific details about the night she claims Kavanaugh attacked her, but forgetting broader details such as where or when it was 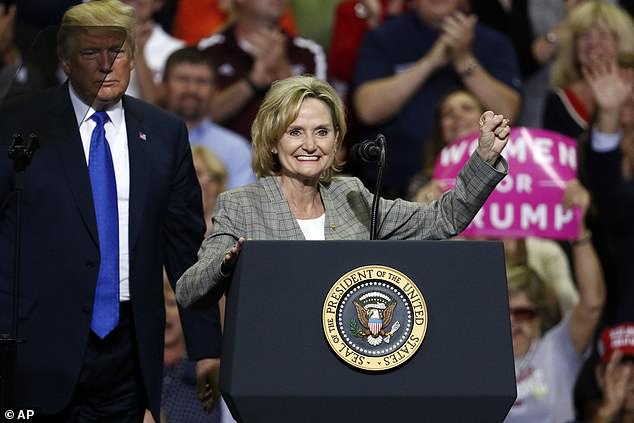 Trump was speaking in support of Cindy Hyde-Smith (pictured) and Roger Wicker, the incumbent state senators, both of whom will be up for reelection in November 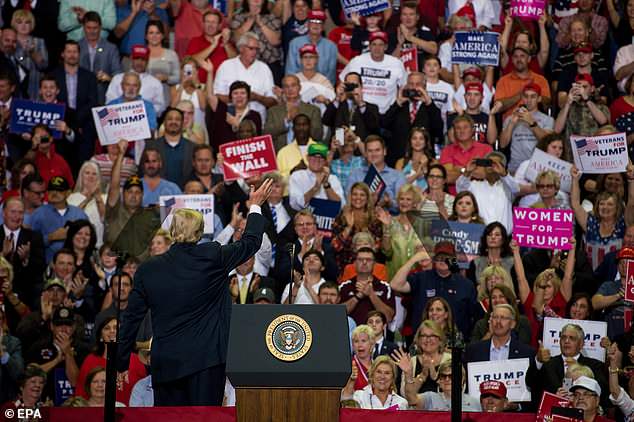 Trump waves to supporters at a Make America Great Again rally at the Landers Center in Southaven, Mississippi

Due to a special election to fill the seat that Hyde-Smith was appointed to earlier this year, both Senate seats in Mississippi are up for re-election in the November 6 midterm election.

Hyde-Smith joined Trump on the stage at the really, where he called her a ‘true Mississippi patriot.’

She lauded Trump and said to the crowd: ‘Is he not the best president we have ever had?’

Hyde-Smith was appointed this year to fill the seat of Republican Thad Cochran. She faces Republican Chris McDaniel and Democrats Mike Espy and Tobey Bernard Bartee in next month’s special election for the remainder of the two-year term.

Trump said a vote for Espy is a vote for the Democrat agenda for ‘open borders and radical socialism.’

He urged citizens to vote Republican in the midterms and said that Democrats would ‘plunge our country into gridlock and chaos like we’ve never seen before.’