The Bodyguard finale may have left viewers teetering on the edge of their seats – but a hilarious comedy side-show was also being cooked up on Twitter at the same time.

The last 15 minutes of the hit political thriller, written by Jed Mercurio, revealed that Chief Superintendent Lorraine Craddock (Pippa Haywood) had been passing over information to organised crime boss Luke Atkins – which directly led to the death of the Home Secretary Julia Montague (Keeley Hawes).

However, as Craddock’s dramatic downfall was revealed, viewers couldn’t quite get a previous character played by the same actress out of their heads.

‘Mrs Brittas did it!’ Viewers tuning into the finale of BBC political thriller Bodyguard joked on Twitter after the identity of the ‘inside man’ was revealed to be Chief Superintendent Lorraine Craddock, played by Pippa Haydock, who once played Helen Brittas in 90s comedy The Brittas Empire – a fact some viewers couldn’t forget 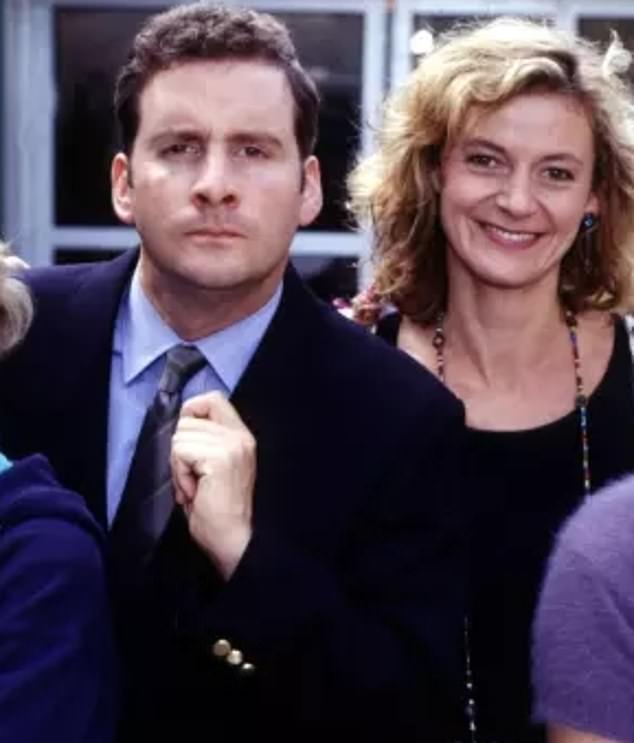 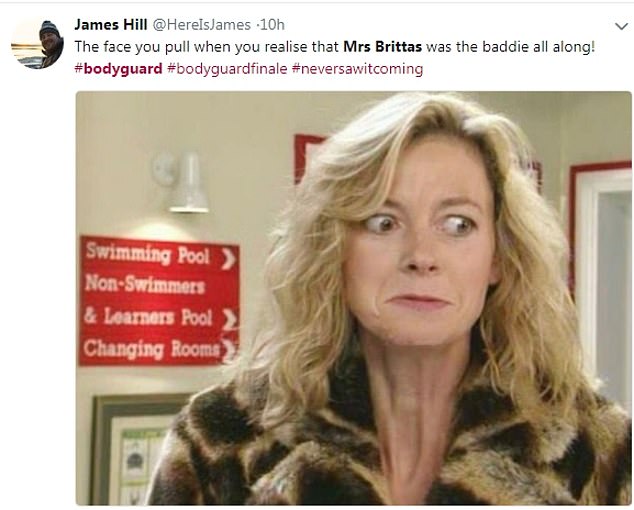 Tension: Chief Superintendent Craddock still appeared to be an ally for policeman David Budd until the final quarter of the show revealed her links to gangland boss Luke Atkins 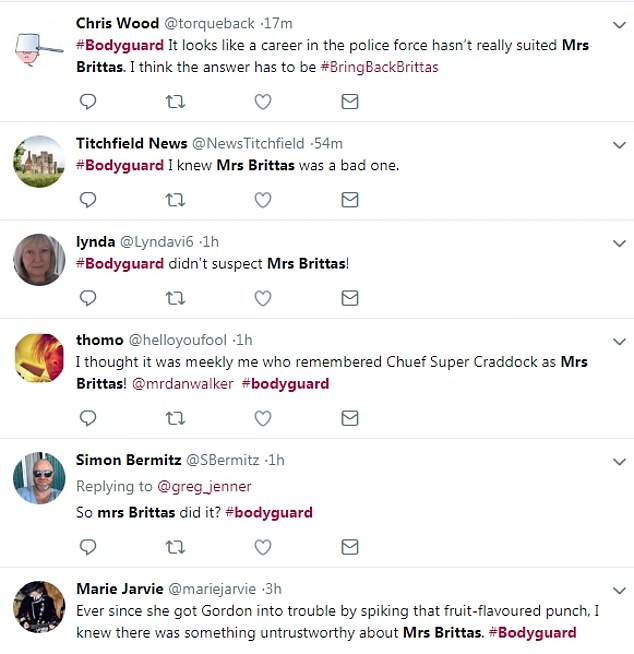 Despite her very credible acting – and 20 years passing – for some, Haywood will always be Mrs Brittas.

As the onscreen action reached a crescendo last night and the corrupt cop’s identity was finally revealed, there were cries aplenty on social media of ‘Mrs Brittas did it!’.

The hugely popular show ran for 53 episodes over six series’ from 1991 before ending in February 1997.

By the time David Budd (Richard Madden) had driven off into the sunset with his ex wife and their children, social media was awash with tweets about how Mrs Brittas had gone off the rails since the council-run leisure centre in Whitbury had closed.

@GuyCLJohnston screamed: ‘#bodyguard Mrs Brittas, how could you!!’

@mariejarvie joked: ‘Ever since she got Gordon into trouble by spiking that fruit-flavoured punch, I knew there was something untrustworthy about Mrs Brittas.’ 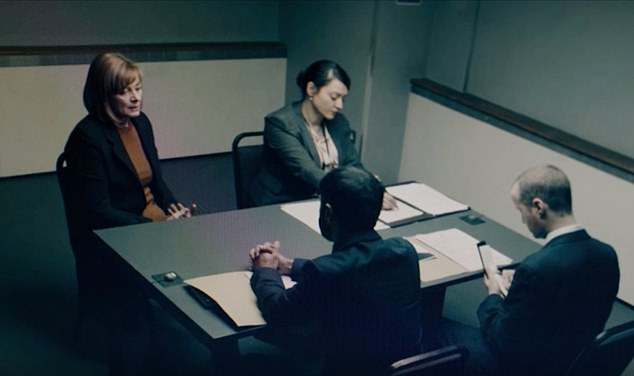 Gotcha! A tearful Lorraine Craddock confesses to the part she played in the murder of Home Secretary Julia Montague (Keeley Hawes) 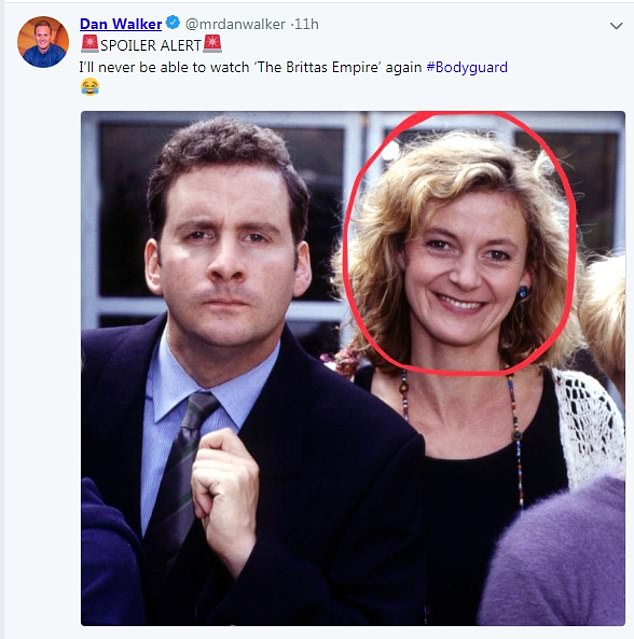 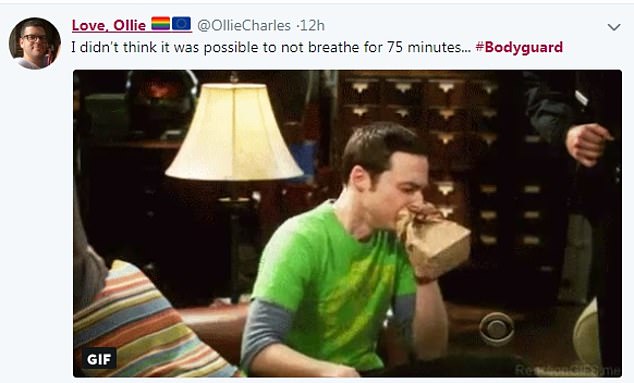 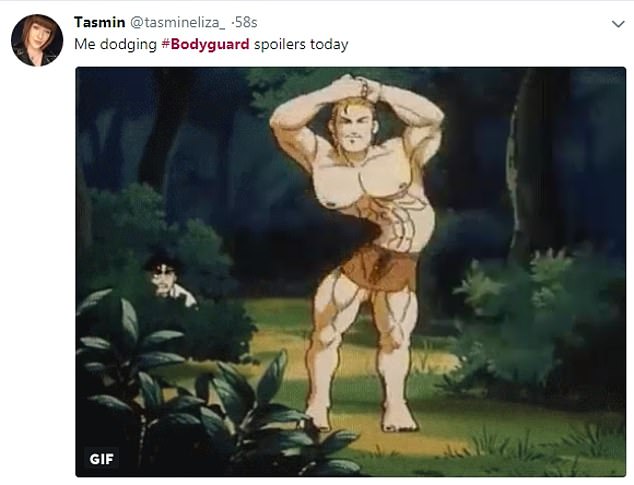 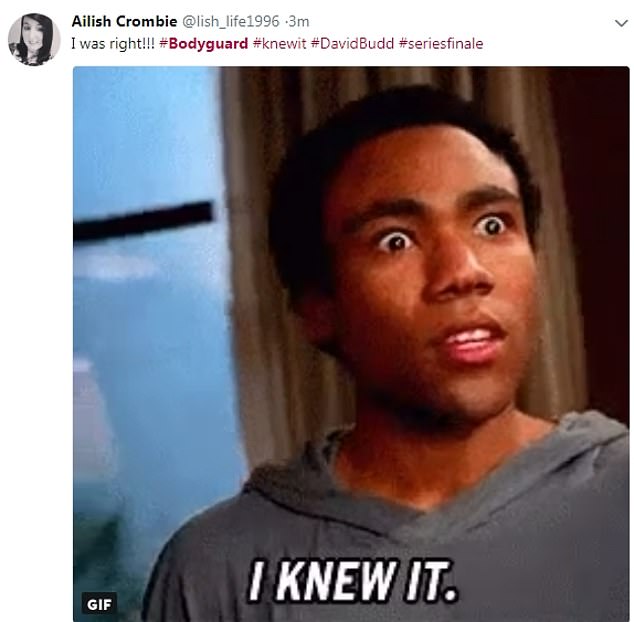 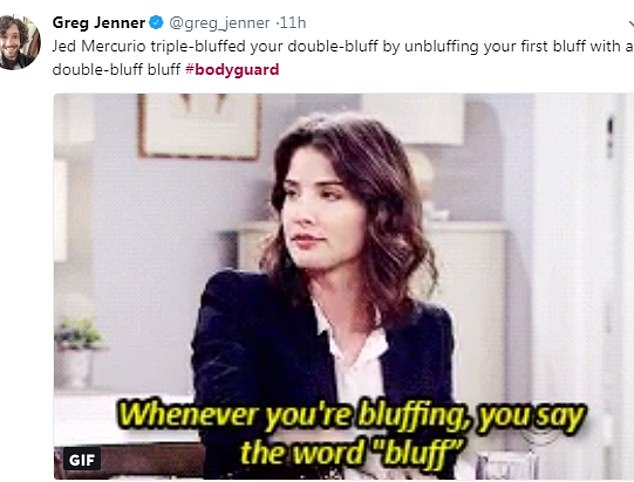 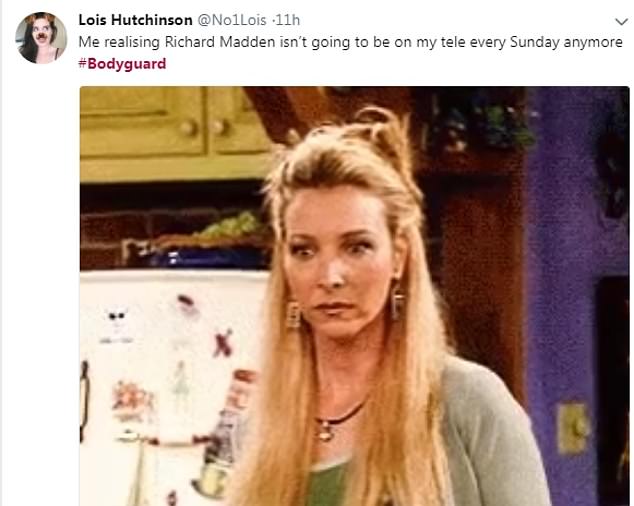 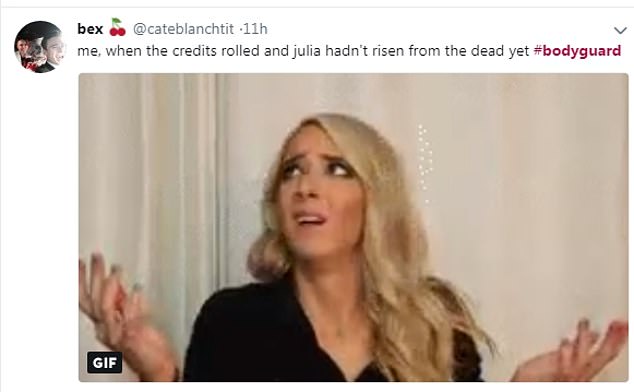 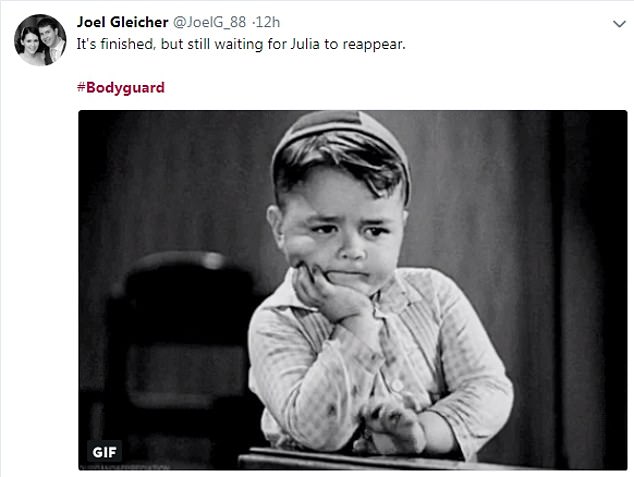 @dgellis0907 offered: ‘Honestly. Who would have thought Mrs Brittas was such a crook? #Bodyguard’

BBC Breakfast presenter Dan Walker suggested he may never watch The Brittas Empire again having made the mental connection.

Harking back to erstwhile plots on the Brittas Empire, @LJ80s added: ‘@BBCOne I know Mrs Brittas has done some crazy things like stealing, running through the street in her nighty and trying to steal her own fur coat, but corruption now. What will Mr Brittas think!! @CBarrieFans @BringBkBrittas.’ 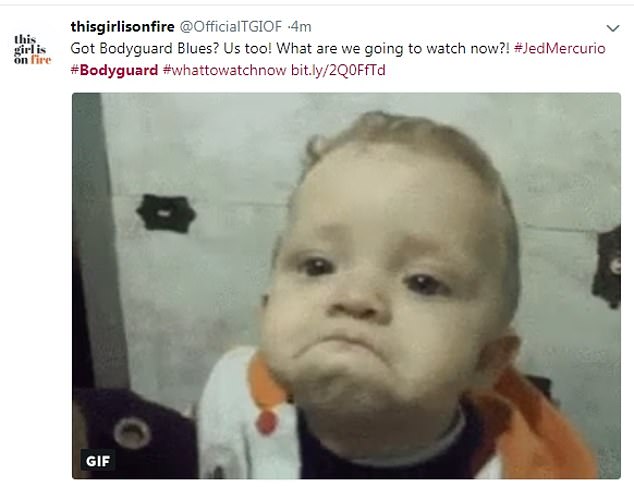 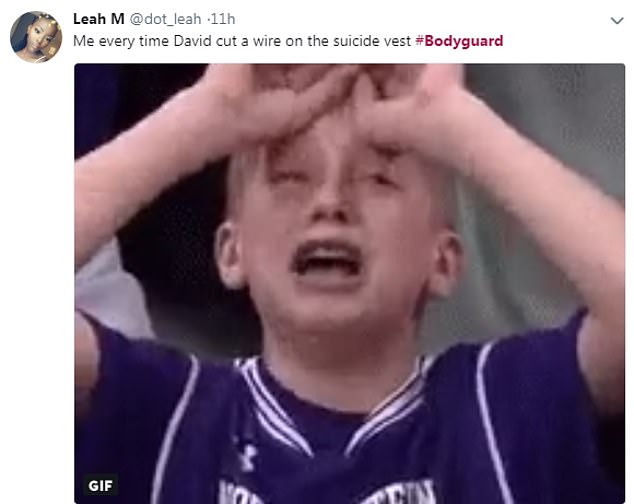 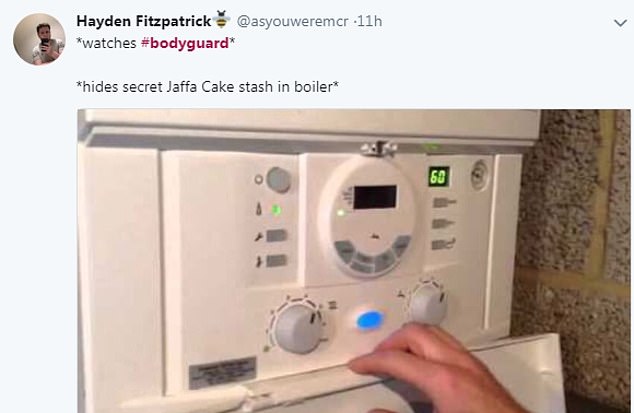 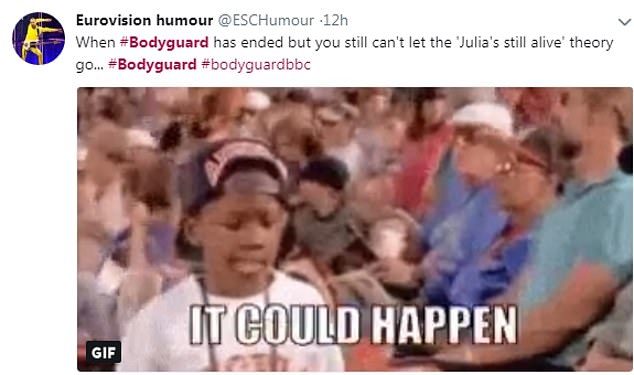 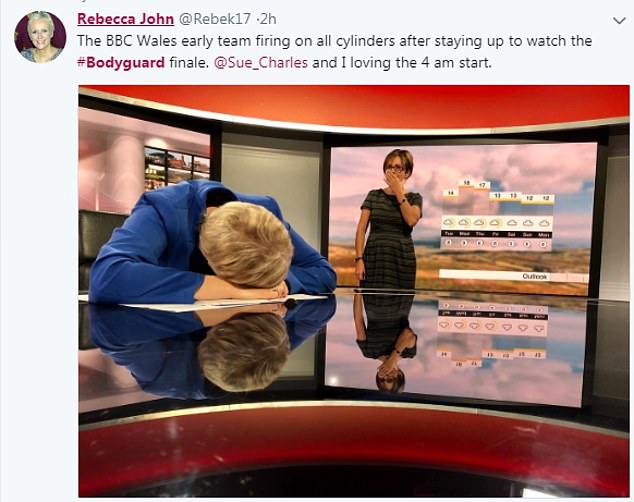 From those who were desperate to dodge spoilers, to others who were convinced Keeley Hawes’ character Home Secretary Julia Montague was still alive – despite being pronounced dead in the third episode – many reached for gifs and memes to express their angst.

As the drama unfolded, viewers were left on the edges of their seats by a ‘bombshell’ twist in Mercurio’s plot.

Fans watched in horror as it was revealed it was David Budd’s own boss, Craddock, played a key role in Julia Montague’s death, before a final, unexpected twist was revealed.

It was a double blow for Budd (Madden) as the true identity of the female train bomber from the first episode, Nadia (Anjli Mohindra), who he believed he had saved, was revealed to be behind the attacks on Julia Montague and his own children.