Twitter was ecstatic when one user shared a photo of a direct message from Betty Crocker that said if he got 150,000 retweets the brand would bring back Dunkaroos.

People from all over the United States including Kim Kardashian jumped on the bandwagon and rejoiced that the ’90s snack would be making an official comeback to supermarkets.

To the dismay of millions, the photo posted was actually fake and the internet was turned upside down after a spokesperson for General Mills as well as Betty Crocker announced the entire ordeal was fake.

Challenge: Twitter was ecstatic when one user shared a photo of a direct message from Betty Crocker that said if he got 150,000 retweets the brand would bring back Dunkaroos

Obsessed: People from all over the US including Kim Kardashian jumped on the bandwagon and rejoiced that the ’90s snack would be making an official comeback Fake: To the dismay of millions, the photo posted was actually fake and the internet was turned upside down 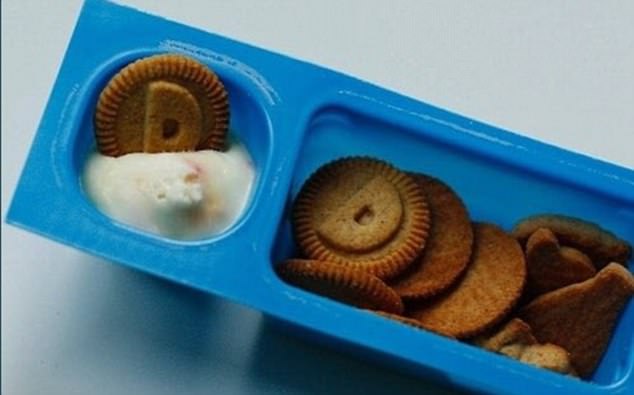 Not real: A spokesperson for General Mills as well as Betty Crocker announced the entire ordeal was fake and the photos were PhotoShopped

Twitter user Luke Kelly fueled the fire when he tweeted out a screenshot of a direct message exchange between him and the official Betty Crocker account.

Luke sent them a message asking: ‘How many retweets to bring back Dunkaroos?’ to which Betty Crocker replied: ‘150,000.’

‘Let’s make this happen,’ he captioned the tweet that sparked people’s excitement recieving over 110,000 likes and 200,000 retweets within hours.

While most people were elated by the news, there was also a lot of doubt which is why Luke followed up on his own tweet writing, ‘This is for everyone who thinks it’s fake,’ with a screenshot of an email saying Betty Crocker messaged him.

One of the first people to jump on board was Kim, 37, who wrote, ‘Obsessed with Dunkaroos. Please come back!’ which only added to the excitement.

‘Thank you for using your platform to support a good movement,’ one user wrote in reply to Kim’s tweet.

‘If Kim Kardashian says Dunkaroos need to come back then they better come back,’ another person commented.

Perhaps the funniest tweet came from one man who responded to Kim saying, ‘We will happily trade the new Kanye for Dunkaroos.’

Meanwhile, other users were frantically replying to the Twitter thread writing things like, ‘Almost 200k retweets.. BRING IT BACK,’ and ‘If we accomplish one thing in 2018 can it be the bring back of Dunkaroos plz.’ 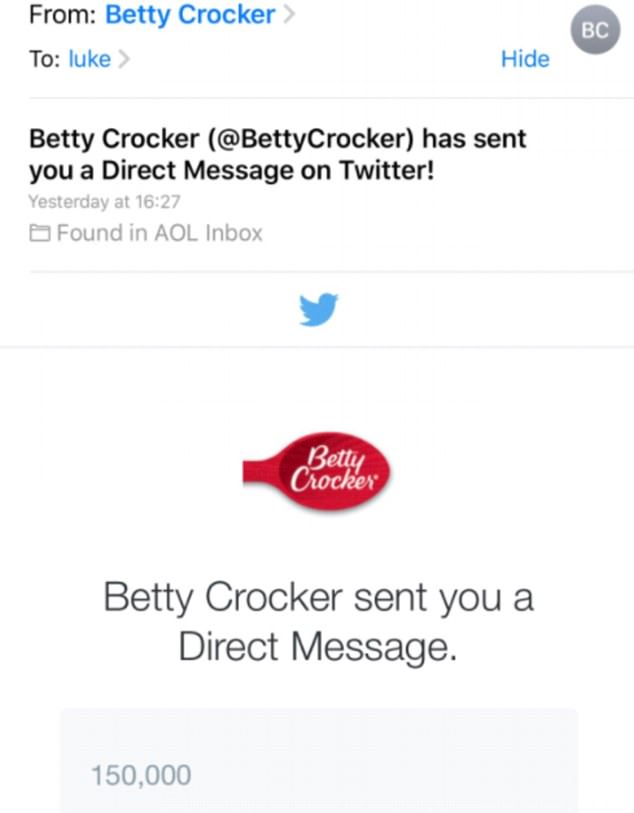 PhotoShopped: Twitter user Luke Kelly who started the whole ordeal even tweeted out a follow-up image as proof that Betty Crocker really messaged him

Retweets: The goal was to get 150,000 retweets but Luke managed to amass over 200k overnight

Influence: This user tweeted that if Kim wants to make it happen than it should happen

Trade: One hilarious tweet read that they would trade the new Kanye for Dunkaroos False: Betty Crocker broke the news that Dunkaroos are not making a return via it’s official Twitter account

The tweet was getting so much attention that people actually thought it would return and one woman even wrote: ‘Retweeting the Dunkaroos tweet makes me feel a part of something big.’

However, everything took a turn when Mike Siemienas, General Mills spokesman, said to Salt Lake City’s KUTV-TV: ‘The image appears to be a PhotoShop rendering.

‘We love hearing from consumers and we hear from them all the time whenever we discontinue a product because we know someone will miss our products.

‘There are no plans to reintroduce Dunkaroos in American, but General Mills wants to know our consumers’ thoughts and we appreciate them.’

Still not believing the news the official Twitter account of Betty Crocker shared a follow-up statement reading: ‘We’re seeing your tweets asking for the return of Dunkaroos in the U.S. and we’ll keep reading them!

ASAP: A very unpatient fan of the snack said she needs Betty to bring them back immediately

Hilarious: One man who was so angry that the amount of retweets had been met tweeted this to Betty Crocker 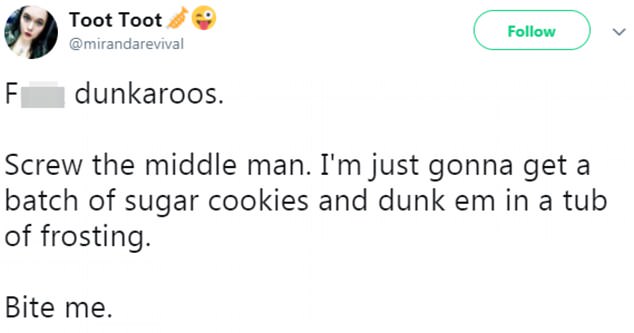 Recipe: This woman got very annoyed and said she’s just going to make her own Dunkaroos 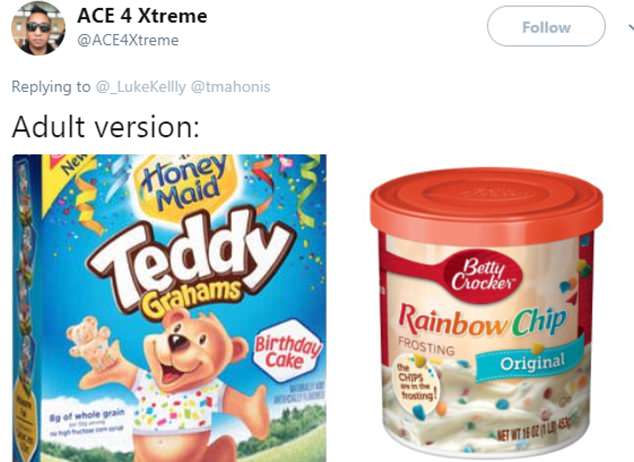 Brilliant: One guy tweeted out an amazing recipe for making your own Dunkaroos that would taste exactly the same

‘But we need to let you know we never set a number of RTs for a comeback, as you may have seen in a fake DM screenshot. At this time, we don’t have anything to announce.’

Hearts were broken everywhere when the news was solidified and one man hilariously replied to the tweet saying, ‘Please betty, please.’

The announcement regarding the fake comeback only made people want the snack more as the comments kept rolling in and a Twitter account BRING BACK DUNKAROOS, under the handle @ilovedunkaroos, was created.

‘I didn’t mind these photoshopped tweets until now. Don’t play around with Dunkaroos that s**t is serious,’ one man commented.

‘Can you imagine the pandemonium that would go down if they re-released Dunkaroos especially if it was only for a limited time…bodies would hit the floor y’all,’ another woman wrote.

Unpopular: This girl shared that she doesn’t like the snack and people were baffled by that

Don’t play: Another user was happy until he realized Dunkaroos will never make a return

Still exist: Dunkaroos still exist in Canada and Australia which is why people are confused why they aren’t available in the US anymore 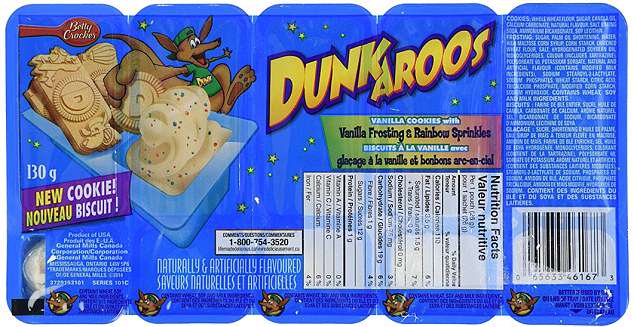 Gone: Betty Crocker confirmed that Dunkaroos will not be making a return at this time

A very angry user replied to Betty Crocker’s tweet writing: ‘@BettyCrocker RUN THESE F*****G DUNKAROOS THE CONDITIONS HAVE BEEN MET.’

‘The fake Dunkaroos retweet challenge is not the kind of thing you want to spend your Friday dealing with…,’ a very aggravated woman wrote.

One man came up with a very nice idea as he tried to mediate the situation writing: ‘How about you make 50,000 of them, sell them online and every purchase the proceeds go toward charity?’

Others were completely over the news and gave up on Dunkaroos making a comeback altogether.

‘F**k Dunkaroos. Screw the middle man. I’m just gonna get a batch of sugar cookies and dunk em in a tub of frosting. Bite me,’ one woman wrote.

Despite the US not having Dunkaroos, Canada and Australia both still have them which many people revealed in the comments making others quite jealous.