Twitter outrage over another AR-15 used in mass shooting

People have flocked to Twitter to reveal their outrage over the fact that a semi-automatic AR-15 rifle was once again used in a fatal school shooting, this time leaving 17 dead at a Florida high school.

Nikolas Cruz, 19, entered Marjory Stoneman Douglas High School in Parkland, Florida on Wednesday afternoon and killed 17 students with an AR-15 assault rifle, leaving lawmakers, celebrities and regular citizens expressing disbelief and anger over why the military-style weapon has not been banned in most US states. 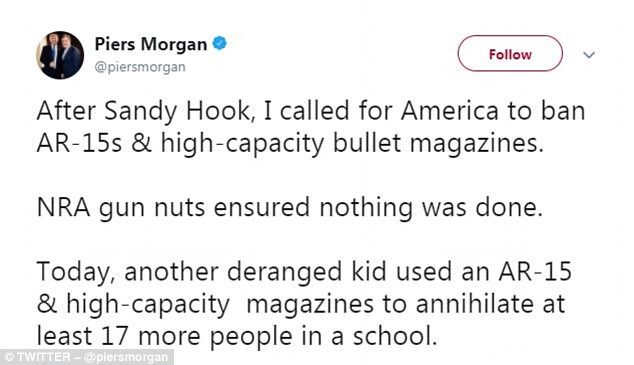 Politicians and celebrities were quick to express outrage over the fact that another AR-15 was used in a mass shooting, asking how much longer people would have to sit by and watch the semi-automatic rifles being used against children and others

Many Twitter users simple tweeted out a list of the mass shootings that have involved AR-15s over the years, while others, like Piers Morgan, aggressively called out NRA ‘gun nuts’ for ensuring that the semi-automatic rifles continued to be sold without restrictions.

As other politicians did, Senator Dianne Feinstein expressed condolences to the Parkland shooting victims and their families, but didn’t stop there. Instead, she cut straight to the heart of the matter, noting that ‘My bill to ban assault weapons is ready for a vote. How long will we accept weapons of war being used to slaughter our children?’

Singer Sebastian Bach tweeted a chastisement to people who don’t believe there’s any reason for AR-15s being banned.

‘A CHILD’s right to go to school without getting SHOT by an AR 15 is more IMPORTANT than an ADULT’s “right” to own or posess [sic] an AR 15…Any ADULT who thinks their “rights” are more important than a KID’s rights are, is a SELFISH, STUPID A**HOLE,’ Bach tweeted. 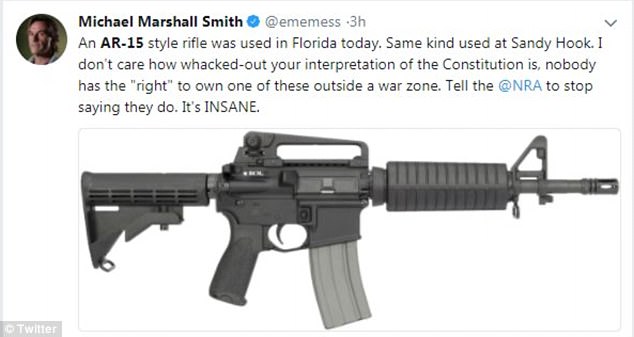 Many tweeters blamed the NRA, holding the gun rights advocacy group responsible for helping to enable the latest mass shooting by working against gun restrictions and bans 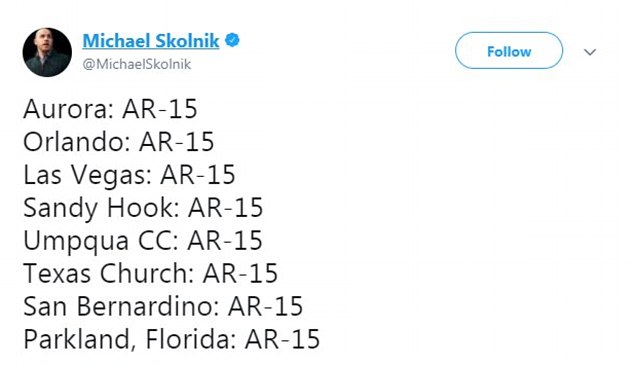 Many tweeters went after the NRA directly, holding the gun rights advocacy group’s efforts responsible for helping to enable the latest mass shooting for working against gun bans and restrictions.

Meanwhile, sports journalist Aditi Kinkhabwala tweeted that ‘The NRA says the AR-15 is a hunting rifle. After the AR-15 was used to massacre the innocent at Sandy Hook Elementary School, a Parkland, Fla HS and an Aurora, CO movie theatre, in San Bernardino and Vegas, is the NRA going to clarify & say the rifle is used for hunting HUMANS?’

Author Marshall Michael Smith tweeted out a picture of an AR-15 and wrote that, ‘I don’t care how whacked-out your interpretation of the Constitution is, nobody has the “right” to own one of these outside a war zone. Tell the @NRA to stop saying they do. It’s INSANE.’