Newly released documents detail how Twitter executives sought to censor ‘inconvenient’ data about COVID by discrediting doctors and experts who spoke out against vaccines.

In the latest installment of the Twitter Files, journalist David Zweig laid bare how both the Trump and Biden administrations pressured Twitter executives to censor information that was ‘true but inconvenient.’

Using their pull, Zweig writes, the government was able to discredit doctors and experts, and suppress ordinary users’ freedom of speech on Twitter — even if they were citing the Center for Disease Control’s own data.

The Biden administration was even able to get former New York Times reporter Alex Berenson off the platform for his tweets questioning the mRNA vaccines being developed to eradicate the virus.

The documents provide more context as to how the government infiltrated the social media giant to suppress certain stories. 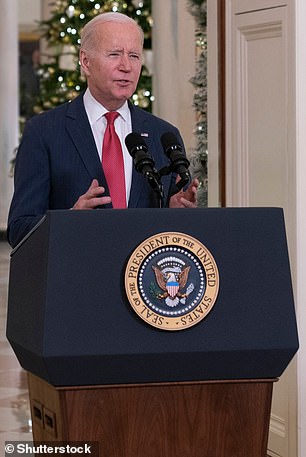 Twitter executives suppressed the views from doctors and scientific experts, according to the most recent Twitter files

According to the documents released on Monday, the Trump administration met with executives at Twitter, Google, Facebook and Microsoft looking for ‘help from the tech companies to combat misinformation’ about ‘runs on grocery stores… that could stoke panic buying and behaviors’ in the early days of the pandemic.

Then, when the Biden administration took over, they became focused on tackling ‘misinformation’ about vaccines and targeted high-profile vaccine skeptics like Berenson.

He was kicked off the platform the following month, and ultimately sued (and settled with) Twitter.

As part of the legal process, Twitter was compelled to release internal communications, which showed how the White House pressured the company to take action on Berenson.

But the Biden administration was apparently ‘very angry’ that Twitter had not done more to deplatform other accounts, and pressured executives to do more.

‘Twitter executives did not fully capitulate to the Biden team’s wishes,’ Zweig tweeted on Monday.

‘An extensive review of internal communications of the company revealed employees often debating moderation cases in great detail and with more care than was shown by the government toward free speech.

‘But Twitter did suppress views — many from doctors and scientific experts — that conflicted with the official positions of the White House.

‘As a result, legitimate findings and questions that would have expanded the public debate went missing,’ Zweig wrote.

Among the accounts that were suspended for spreading ‘misinformation’ was former New York Times reporter Alex Berenson, who expressed concerns online about the mRNA vaccines

Among the many experts that were deemed to have spread ‘misinformation’ was Dr. Martin Kulldorff, an epidemiologist at Harvard Medical School.

On March 15, 2021 he responded to a question about whether those who have already had the virus and young children should get the vaccine.

‘No. Thinking that everyone must be vaccinated is as scientifically flawed as thinking that nobody should,’ he wrote at the time. ‘COVID vaccines are important for older high-risk people and their caretakers.

‘Those with prior natural infection do not need it. Nor children.’

That tweet was flagged by a content moderator at the site saying it shared ‘false information regarding the efficacy of the COVID-19 vaccines’ because it differed from Centers for Disease Control guidelines at the time.

It was soon labeled as ‘misleading,’ and all replies and likes were shut off.

And a tweet by Kelly Kga, a public health fact checker, was also labeled as ‘misleading,’ with its likes and replies disabled — even though it displayed the CDC’s own data.

‘Internal records showed that a a bot had flagged the tweet, and that it received many “tattles” (what the system amusingly called reports from users,’ Zweig wrote.

‘That triggered a manual review by a human who — despite the tweet showing actual CDC data — nevertheless labeled it “misleading.”‘

But the tweet that Kelly Kga was replying to ‘contained actual misinformation,’ Zweig said, claiming that COVID was the leading cause of death from disease in children.

‘Yet that tweet remains on the platform, and without a “misleading” label,’ Zweig tweeted.

Meanwhile, Andrew Bostom, a Rhode Island physician, was permanently suspended from the site after he tweeted a peer-reviewed study about the efficacy of mRNA vaccines.

‘A review of Twitter log files revealed that an internal audit, conducted after Bostom’s attorney contacted Twitter, found that only one of Bostom’s five violations were valid,’ according to Zweig.

‘The one Bostom tweet found to still be in violation cited data that was legitimate but inconvenient to the public health establishment’s narrative about the risks of flu versus CIVUD in children,’ he wrote. 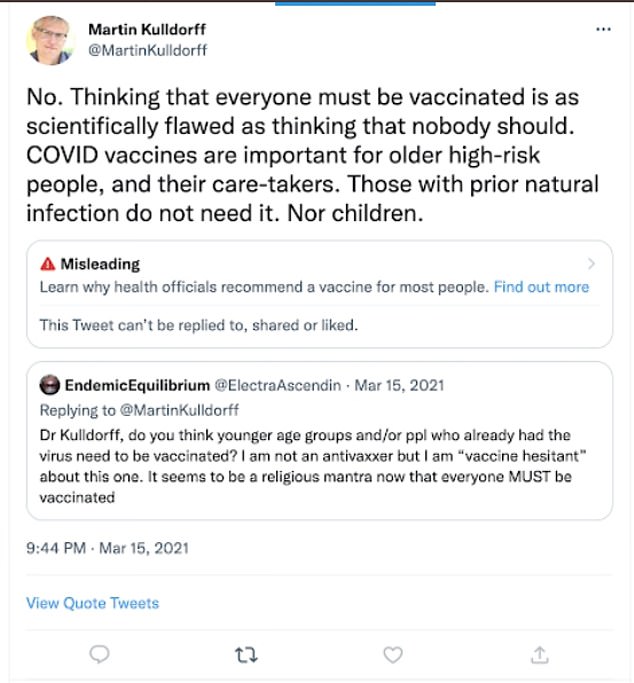 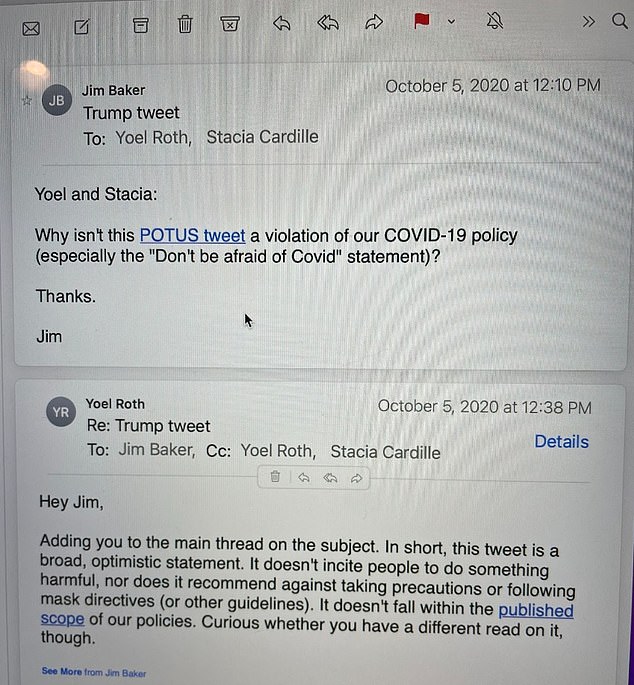 Jim Baker, the disgraced former FBI lawyer turned Twitter attorney, questioned why the tweet wasn’t being labeled as misinformation, and Yoel Roth, Twitter’s former head of Trust and Safety, had to explain that it doesn’t ‘recommend against taking precautions or following mask directives (or other guidelines)’

The October 5, 2020 tweet read:  ‘I will be leaving the great Walter Reed Medical Center today at 6:30pm. Feeling really good! Don’t be afraid of Covid. Don’t let it dominate your life.

‘We have developed, under the Trump administration, some really great drugs and knowledge,’ he continued. ‘I feel better than I did 20 years ago.’

Jim Baker, the now disgraced former FBI lawyer turned Twitter attorney, then sent an email to Yoel Roth, Twitter’s former head of Trust and Safety, asking why the tweet was not being taken down.

He had to reply: ‘In short this tweet is a broad, optimistic statement. It doesn’t incite people to do something harmful, nor does it recommend against taking precautions or following mask directives (or other guidelines).’

The problem, according to Zweig, is the very way in which Twitter decides how to moderate content.

Much of the content moderation is conducted by bots, trained on machine learning and AI. They also rely on contractors in places like the Philippines, where moderators are given decision trees to aid in the process of deciding what is misinformation.

‘But tasking non experts to adjudicate tweets on complex topics like myocarditis and mask efficacy were destined for a significant error rate.’

And ultimately, Zweig writes, the ‘buck stopped with higher-level employees at Twitter who chose inputs for bots and decision trees, and subjectively decided escalated cases and suspensions.

‘As it is with all people and institutions, there was individual and collective bias.’

He continued: ‘Twitter made a decision, via the political leanings of senior staff, and government pressure that the public health authorities approach to [the] pandemic — prioritizing mitigation over other concerns — was “The Science.”

‘Information that challenged that view, such as showing harms of vaccines or that could be perceived as downplaying the risks of COVID, especially to children, was subject to moderation and even suppression. No matter whether such views were correct or adopted abroad.’