People online often boast about the adorable and sweet interactions they have with their pets.

But a recent Twitter thread asked pet owners to share times their pets’ have acted like ‘dumb jerks’ towards them, and the responses the user received back were hilarious.

Talia Lavin, a writer based in New York, ask her Twitter followers to share moments they clashed with their own pets. She wrote: ‘I can’t sleep or seem to disconnect so tell me about a time your pet was a dumb jerk.’ 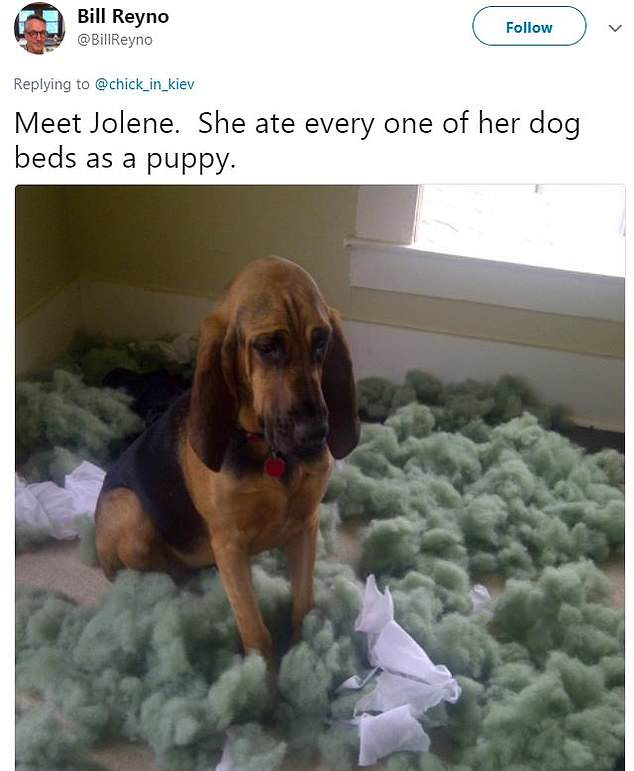 Adorable: One dog owner shared a picture of her dog surrounded by her torn bedding 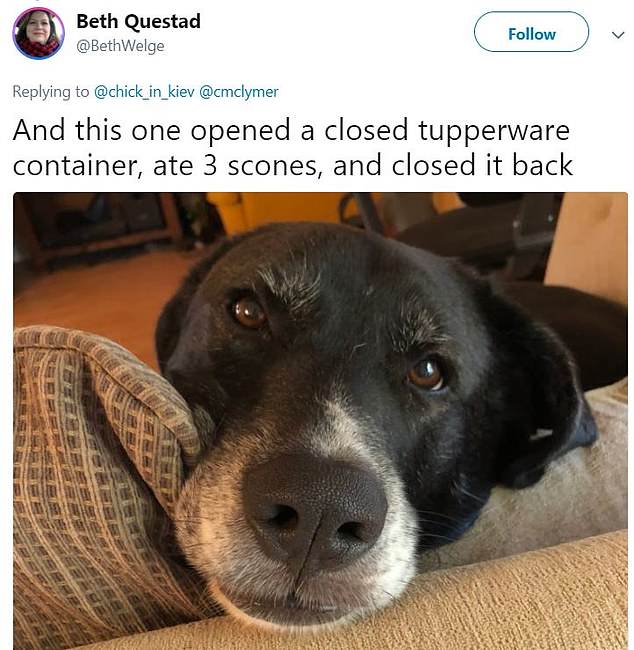 Talented: Another dog owner revealed how her animal was able to open and close Tupperware to snag food 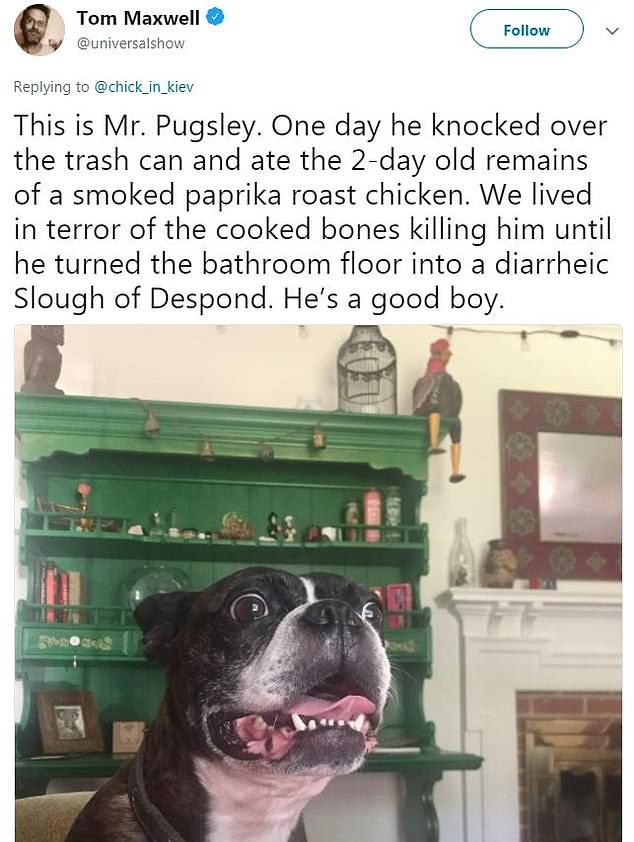 Funny: One smiling dog went above and beyond to access chicken bones hidden in the trash 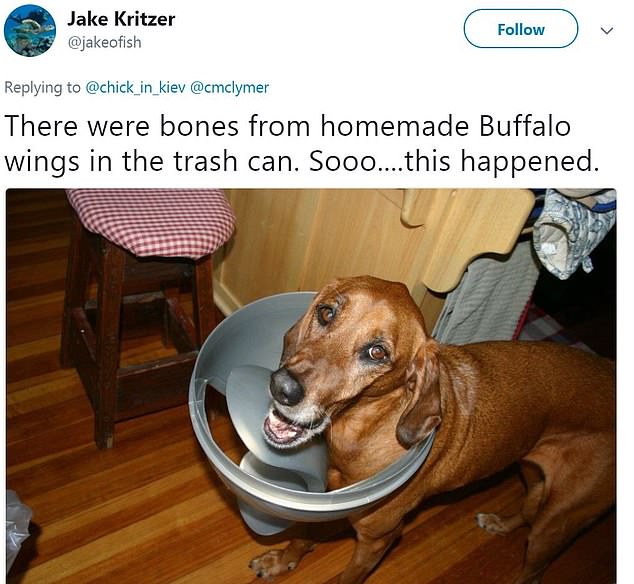 Same boat: Multiple dogs went all out to try and snag food in hard to reach areas of their home

Many people took to the comments to not only share stories but also pictures of times they thought their pets were ‘dumb jerks’ to them.

Bill wrote: ‘Meet Jolene. She ate every one of her dog beds as a puppy.’

Another dog owner, Beth Questad, shared how amazingly talented her dog is with opening containers with its mouth.

‘This one opened a closed tupperware container, ate 3 scones, and closed it back,’ Beth shared with a picture of her dog looking adorably innocent despite the claims of theft.

It appeared many dog owners on Twitter had their own tales of times their animals found ways to eat food they were not supposed to consume.

‘This is Mr. Pugsley,’ A man named Tom Maxwell wrote with a picture of his smiling dog. ‘One day he knocked over the trash can and ate the two-day old remains of a smoked paprika roast chicken.

‘We lived in terror of the cooked bones killing him until he turned the bathroom floor into a diarrheic Slough of Despond. He’s a good boy.’

Mr. Pugsley was joined by another dog who ended up with a trash can lid on his head because he wanted to snag the Buffalo Wild Wing bones in the garbage. 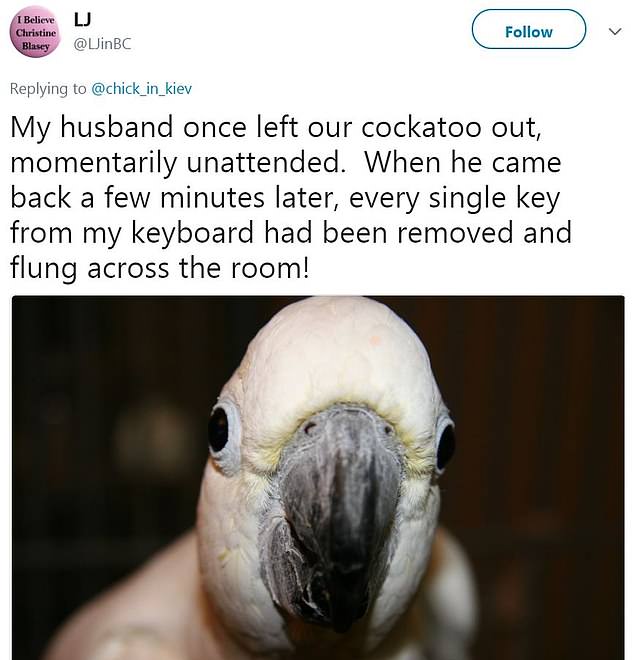 Hilarious: One owner shared how their bird attacked a keyboard in their home when left alone 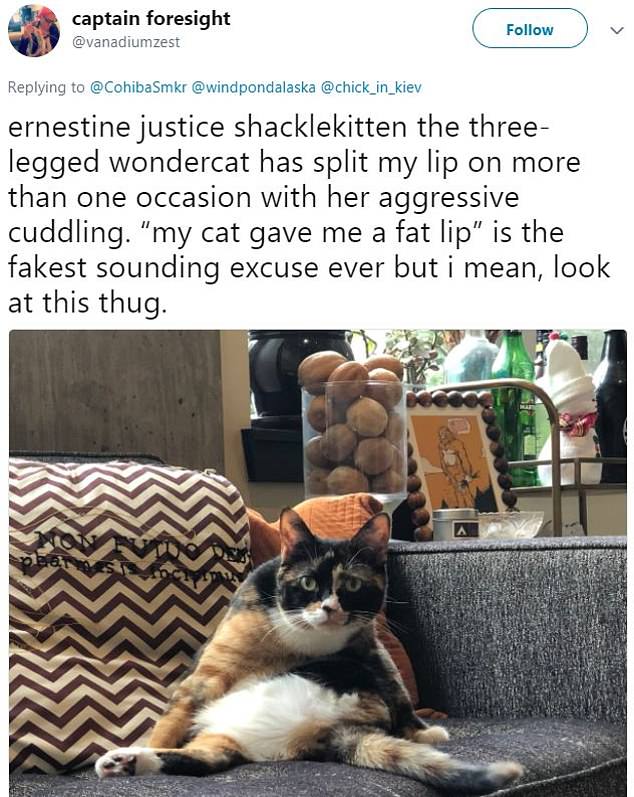 Chilling: One three-legged cat has been known to be an ‘aggressive cuddler’ 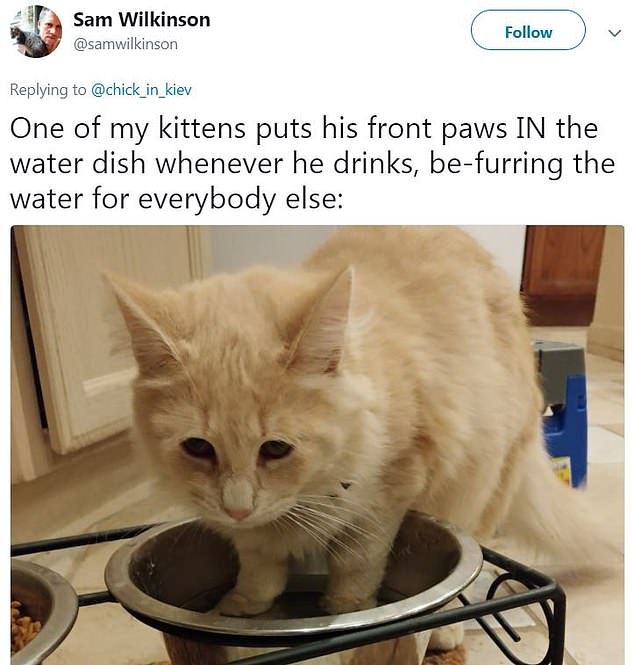 Rude: Another pet owner joked how their kitten always placed his paws in the water bowl while drinking to the disdain of the other animals 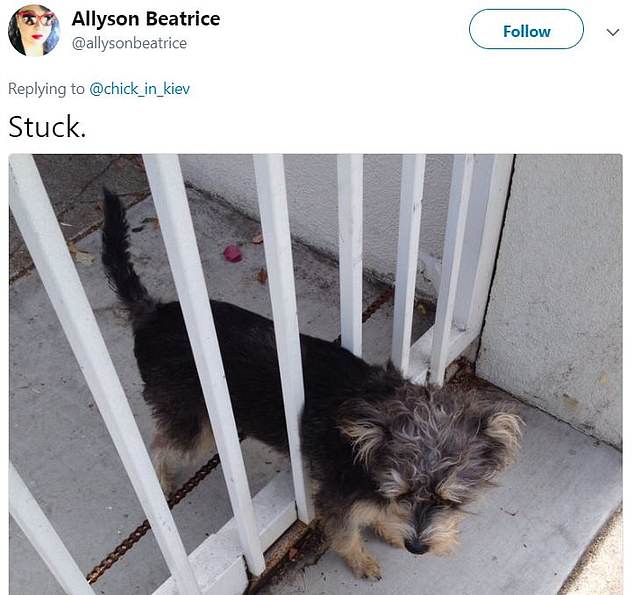 Unfortunate: Some dogs have gotten themselves into sticky situations when they have been up to no good

But dog owners were not the only ones who had tales of their pets behaving like complete jerks.

A Twitter user named LJ shared a times the family cockatoo enacted revenge on a keyboard.

‘My husband once left our cockatoo out, momentarily unattended,’ LJ wrote. ‘When he came back a few minutes later, every single key from my keyboard had been removed and flung across the room!’

Another Twitter user shared a hilarious picture of their cat lounging on a couch. They wrote: ‘Ernestine justice shacklekitten the three-legged wondercat has split my lip on more than one occasion with her aggressive cuddling.

‘“My cat gave me a fat lip” is the fakest sounding excuse ever but I mean, look at this thug.’ 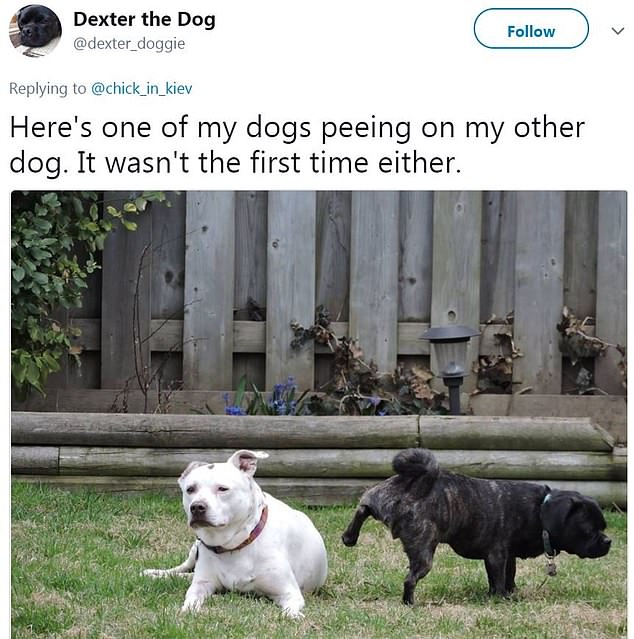 Inconsiderate: One dog owner online shared a hilarious picture of one of the dogs peeing on the other 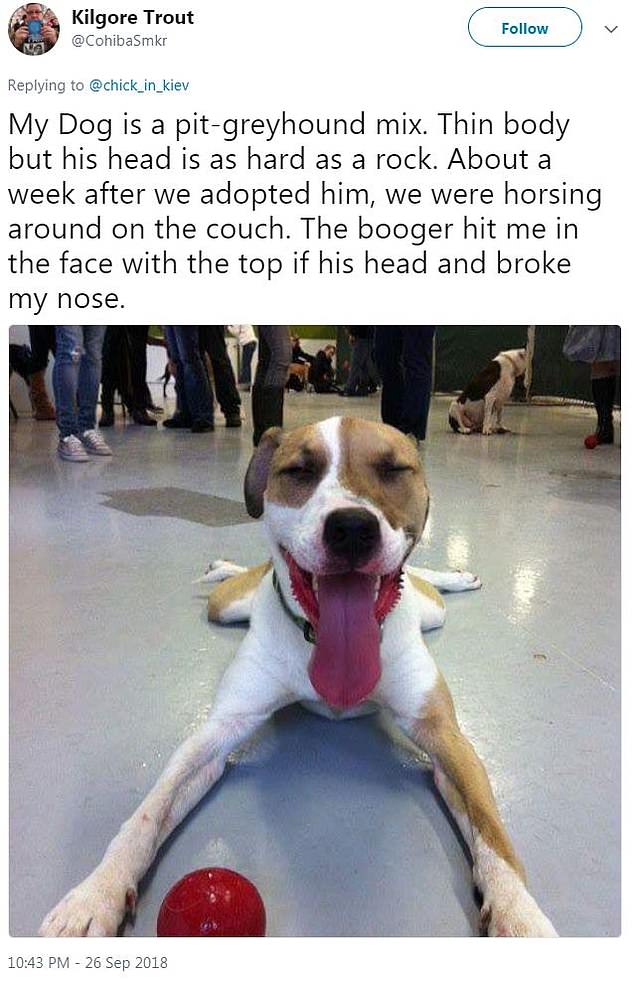 Hard hitter: Another pet owner revealed how they received a bloody nose on accident from their dog 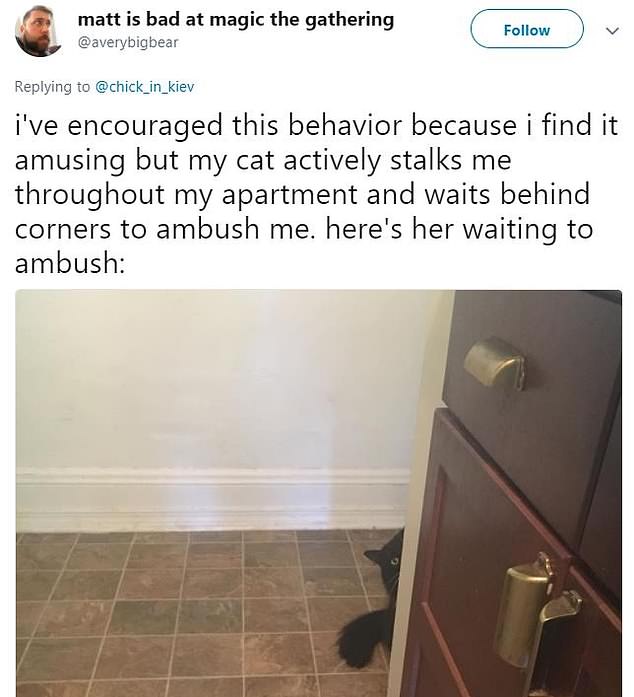 Encouraged: One cat learned how to stalk their own by sneaking around corners 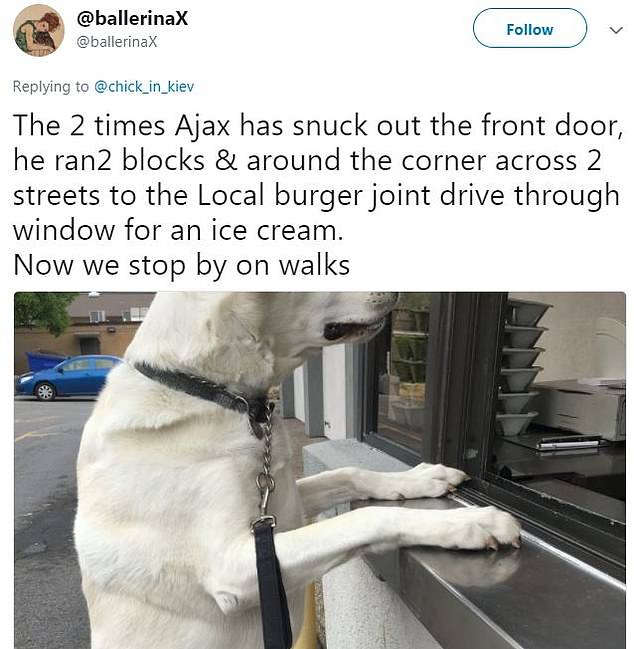 Persistent: One yellow lab has made a point to stop at a local burger joint after he originally visited it during an escape from his home

Cat owners had other tales of how their pets acted like jerks towards them and other animals in the household.

One owner shared: ‘One of my kittens puts his front paws IN the water dish whenever he drinks, be-furring the water for everybody else.’

More than 1,900 people responded to the Twitter thread since it was posted on Wednesday to share their own stories of their misbehaved pets.

In a hilarious picture, one disappointed dog owner showed what it was like to have two pets living in their household.

‘Here’s one of my dogs peeing on my other dog,’ the owner wrote. ‘It wasn’t the first time either.’

Another owner revealed his own cat’s jerk-like behavior but admitted he helped encourage it by turning the act into a game.

‘I’ve encouraged this behavior because I find it amusing but my cat actively stalks me throughout my apartment and waits behind corners to ambush me,’ one man wrote.

Although all the pets who were shared in the thread behaved in ways some could consider rude, many agreed the adorable animals made up for the unfortunate instances in the end.