Twitter users say they are being bombarded with more spam messages than ever before – despite Elon Musk’s pledge to ‘defeat the bots.’

Anecdotally, there have been reports of a sharp increase in the volume of phishing messages since the eccentric billionaire bought the company for $44bn in October.

There are also complaints about the ‘abnormally high number of advertisements’ that are enough for some users to leave the platform  – users claim there is ‘an ad for every two or three tweets.’

Musk made it one of his mission statements – along with stamping out wokeness and championing free speech – to clamp down on bots on the site.

But eyebrows were raised about how Twitter would function when Musk sacked 1,200 technicians and engineers in November.

Recent news revealed that more than 500 advertisers paused their contracts with Twitter, which caused the platform’s daily revenue to drop by 40 percent on January 17 from what it reported at the same time last year.

And the pauses could have led to Musk increasing the show of advertisers that have not yet jumped ship.

While ads can be annoying, spam bots are more of an issue because they prey on users in an attempt to steal their credentials or money.

Musk is well aware that Twitter has bots – he attempted to terminate the deal to buy Twitter over the issue.

However, the Chief Twit has been silent about the issue in recent months and users are starting to get restless.

DailyMail.com spoke to one user from New York: ‘I am seeing at least one spam message each day, most of which are for crypto.

‘There are also ones offering jobs where I can make thousands of dollars a day for doing nothing.

‘And multiple people in the message.’

Another user told DailyMail.com: ‘It reminds me of the robocalls that spam my phone daily and makes me feel like the bot problem on Twitter is getting out of hand. I never got messages like this until a few months ago.’.

Twitter user ‘Zac’ shared on the platform: ‘Yo @elonmusk, I’ve been getting inundated with spam messages lately. Did something change to let these guys sneak in undetected?’

Another by the name of ‘little peepo’ tweeted: ‘I’m getting so many more goddam crypto spam messages since Elon laid his unwashed disgusting flesh digits on this godforsaken platform.’

There are two types of spam bots lurking on the platform: good bots and bad.

One of these good bots is @pikaso_me that will take a screenshot of your tweet and crop it perfectly so you do not have to. 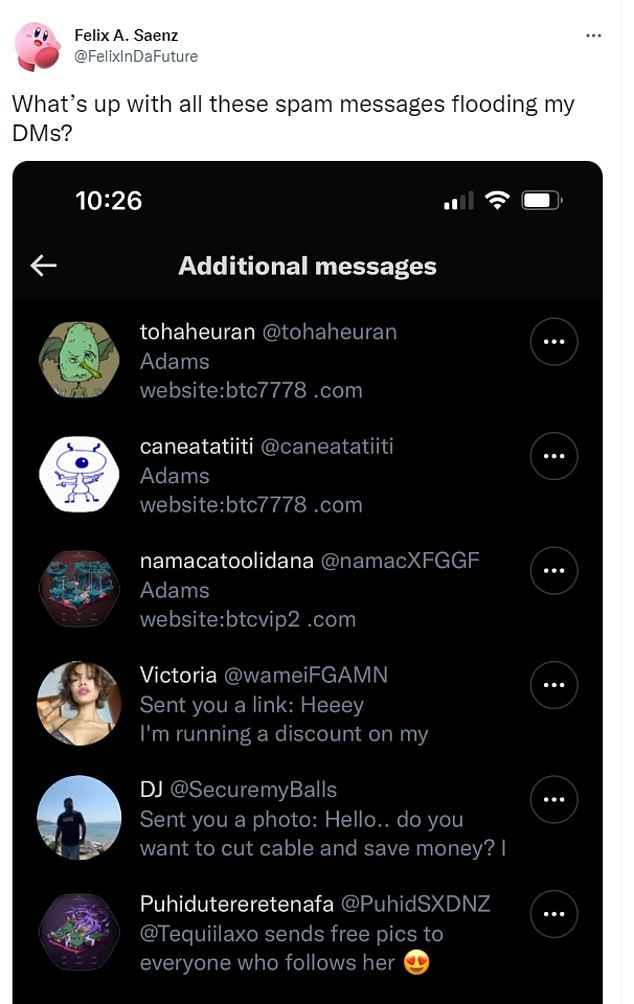 Another is @tinycarebot, which reminds users about daily activities they might have forgotten, such as drinking water throughout the day.

While governments, corporations or bad actors use the latter for several nefarious purposes – and these seem to be running rampant on Twitter. 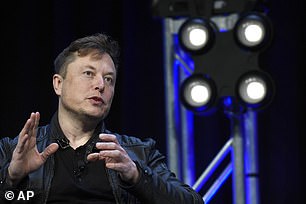 These bots are spreading hate speech, promoting misinformation or attempting to obtain your personal information.

And while spam bots have always lived on the social media platform, they appear to have multiple by the hundreds since Musk took over.

While you may think the war against bots is a lost cause, there are steps you can take to close your DMs.

Once you have done these steps, select Privacy and safety and tap Direct messages.

Turn off Allow message requests from everyone by swiping the button to the left, and the bots should be blocked.

On the other hand, the flood of advertisements is here to stay. 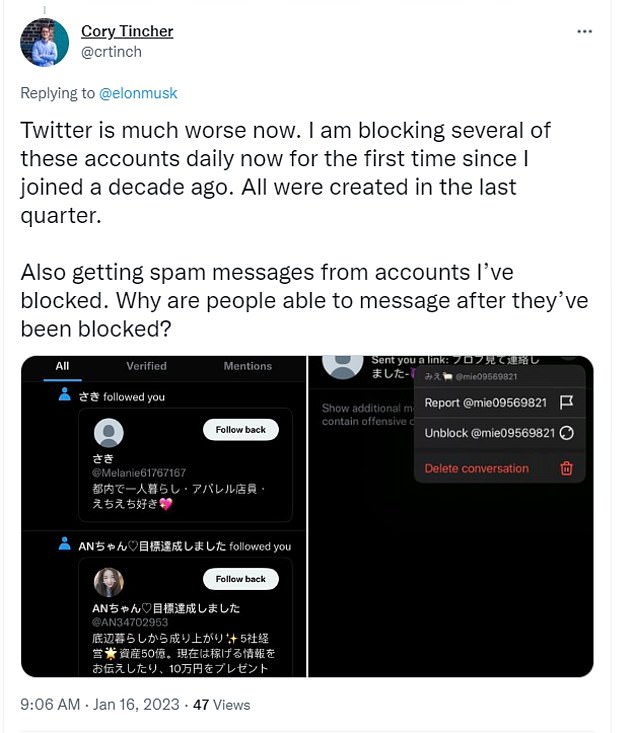 While you may think the war against bots is a lost cause, there are steps you can take to close your DMs. Turn off Allow message requests from everyone by swiping the button to the left, and the bots should be blocked

DailyMail.com spoke to one user from New York who said they received at least four spam messages each day. Here is a screenshot of their inbox

Advertising is Twitter’s bread and butter, and with hundreds of companies pulling or pausing their contracts, it seems Musk is doubling down to generate revenue.

Advertisers have been spooked by the company’s mass lay-offs and Musk’s rush to implement a paid verification feature that resulted in scammers impersonating companies on Twitter. 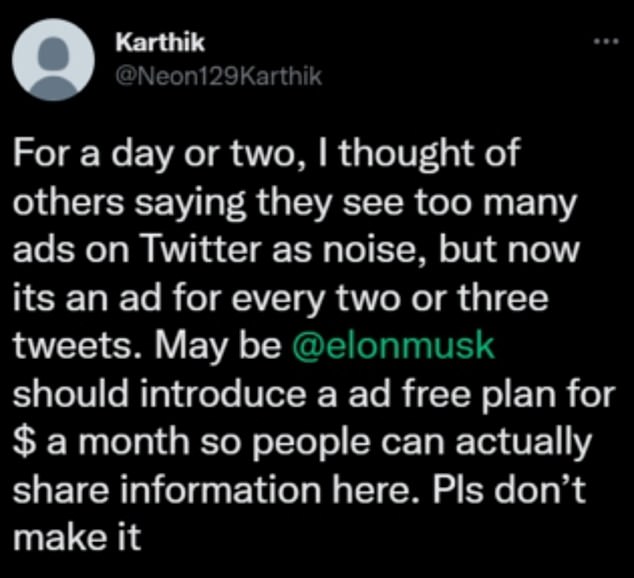 On the other hand, the flood of advertisements is here to stay. Advertising is Twitter’s bread and butter, and with hundreds of companies pulling or pausing their contracts, it seems Musk is doubling down to generate revenue

The platform said it would relax the ’cause-based ads’ advertising policy in the United States and align its ad policy with TV and other media outlets.

In November, Musk admitted there had been issues with advertising revenue, telling his followers: ‘Twitter has had a massive drop in revenue due to activist groups pressuring advertisers, even though nothing has changed with content moderation, and we did everything we could to appease the activists.’

He added: ‘Extremely messed up! They’re trying to destroy free speech in America.’

However, users feel as if they are paying for Musk’s mishaps.

Many are frustrated because ads are taking a significant part of their timelines, preventing them from viewing as many tweets from followed accounts.