Some Twitter users could soon be without service if the firm loses data centers in Georgia and Oregon, according to an internal memo obtained by CNN that claims the social media platform lost a key center in California earlier this month.

The memo, which CNN reports is from the company’s vice president of engineering Carrie Fernandez, states Twitter’s Sacramento data center is offline due to extreme heat and executives are monitoring the Atlanta and Portland facilities.

The California center is said to have been lost on September 5, which ‘resulted in the total shutdown of physical equipment in SMF [Single mode Fiber].’

The other data centers are up and running, but Fernandez wrote if they also experience an outage then the company ‘may not be able to serve traffic to all Twitter’s users.’

An internal memo, obtained by CNN, warns Twitter users could lose service if the company’s data centers in Georgia and Oregon experience an outage

Twitter set up shop in Atlanta in 2014, leasing an 80,000 square feet in a nearly one million-square, according to the Atlanta Business Chronicle.

This is a key facility because it was designed specifically to speed up service and make it more reliable for users.

It is not known exactly where the exact location of the data center is, as Twitter is known to keep a tight lid about its facilities. Nothing is known about its Portland site.

However, all data centers require to sit at a specific temperature in order for systems to work and the extreme heat in California is what knocked out the Sacramento center.

California saw at least two weeks of high temperatures that were the hottest on record for August and September, and Sacramento recorded 116 degrees Fahrenheit at its highest. 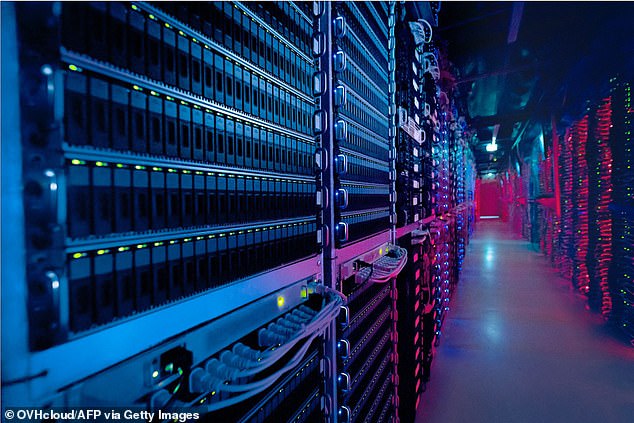 The memo states Twitter lost its  California data center (stock photo) earlier this month, which is a key center for providing service to users

Portland is experience temperatures between 70 and 80 degrees, while Atlanta is in the 80s.

The current status of the data centers is not known and Twitter has yet to announce the statements made in the memo.

The social media platform is not just battling the heat, it is also set for a six-day trial with billionaire Elon Musk.

Twitter is suing Musk, asking the Delaware court to force him to go through with the deal he made in April to buy the company. Musk has countersued and a trial is set to start the week of October 17.

In a statement over the recent court ruling, Musk’s attorney, Alex Spiro, said in a statement: ‘We are hopeful that winning the motion to amend takes us one step closer to the truth coming out in that courtroom.’