Exercising for just two-and-a-half hours a week can reduce your risk of migraine, a new study suggests.

Researchers at a headache clinic at the University of Washington looked into the amount of exercise achieved per week by patients diagnosed with migraine.

They found exercising above the two-and-a-half hour threshold – the minimum recommended by the World Health Organisation (WHO) – reduced migraine triggers like anxiety and poor-quality sleep.

In their sample of more than 4,500 adults with migraine, 73 per cent got less than two-and-a-half hours a week, they found.

Regular exercise may be an effective way to reduce the frequency and intensity of a migraine, which causes an intense, throbbing pain that

The exact cause of migraines is unknown, according to the NHS.

But they’re thought to be the result of abnormal brain activity temporarily affecting nerve signals, chemicals and blood vessels in the brain.

‘It’s not clear what causes this change in brain activity, but it’s possible that your genes make you more likely to experience migraines as a result of a specific trigger,’ the NHS says.

The NHS lists a range of physical, emotional, environmental and dietary triggers on its website.

‘Migraine is a disabling condition that affects millions of people in the US and yet regular exercise may be an effective way to reduce the frequency and intensity,’ said study author Dr Mason Dyess of the University of Washington in Seattle.

‘But if people with migraine are not exercising, they may not be reaping these benefits.’

When most of us hear the word ‘migraine’, we tend to think of a really severe headache.

One sufferer in the UK described a migraine as a ‘throbbing, pounding pain that’s so intense you’d do anything to make it stop’.

But headaches are only one symptom of migraines, and they can range in severity and length, according to another expert.

‘Migraines are a neurological disease that involve nerve pathways and chemicals,’ said Brandeis Brockman, nurse practitioner at Delancey Internal Medicine in the US, who was not involved with this study.

According to Dr Dyess, headache is an umbrella term that includes migraines.

Dr Dyess and his team looked specifically at three causes or ‘triggers’ of migraine that are listed on the NHS’s website –depression, anxiety and sleep problems.

The study involved 4,647 people, all of whom had been diagnosed with migraine, but with different levels of severity.

Approximately three-quarters experienced ‘chronic’ migraine, meaning they had 15 or more migraines a month. The others had ‘episodic’ migraine – up to 14 a month.

Participants completed a questionnaire about their migraine characteristics, sleep, depression, stress, anxiety and the amount of ‘moderate to vigorous’ exercise they got each week.

Types of exercise that qualified as ‘moderate to vigorous’ included jogging, very brisk walking, playing a sport, bicycling and even ‘heavy cleaning’.

They found that 1,270 people (27 per cent) of all the people in the study reported getting the highest amount of exercise (more than two-and-a-half hours a week).

On top of this, people who got less than two-and-a-half hours of moderate to vigorous exercise per week had increased rates of the three triggers – depression, anxiety and sleep problems. 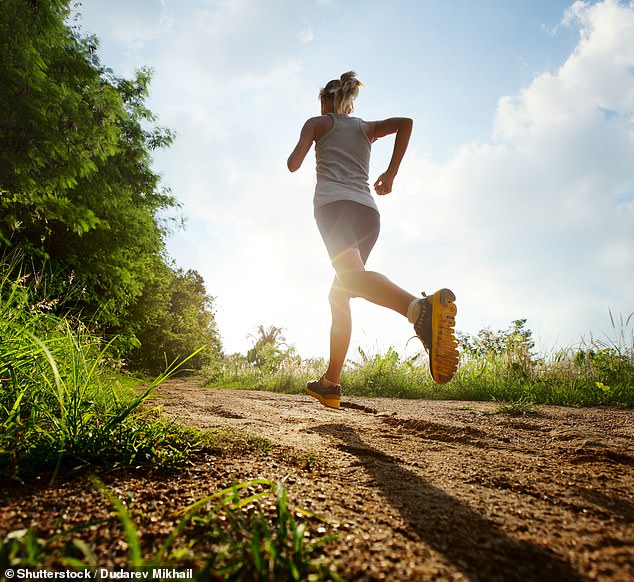 People who got less than two-and-a-half hours of moderate to vigorous exercise per week had increased rates of the three triggers – depression, anxiety and sleep problems (stock image)

‘Our analysis suggests that exercise level below the recommended level by WHO is correlated with an increased rate of depression, anxiety and sleep problems,’ the experts report.

Researchers also found an association between exercise and the risk of migraines or any other type of headache.

While there are some medicines for migraines, including some types of sleeping tablets, exercise might be the cheapest treatment there is.

‘There are new therapeutics available for migraine, but they are very expensive,’ said Dr Dyess, who will be presenting his findings at the American Academy of Neurology’s 73rd Annual Meeting, which is being held virtually from April 17 to 22.

‘People with migraine should consider incorporating more exercise into their daily life because it may be a safe and low-cost way to manage and minimise some of the other problems that often accompany migraine.’

According to the NHS, physical triggers like poor posture, and strenuous exercise if you’re not used to it can all cause migraines too.

PERSONALITY TRAITS COULD INFLUENCE WHETHER YOU GET MIGRAINES: 2017 STUDY