This is the moment two boys rescued their neighbors’ dogs trapped inside a burning house on New Year’s Day.

Anthony Lombardi, 12, and Mario Comella, 13, were riding their bikes past their friend’s home in Coventry, Rhode Island, when they noticed fire alarms going off and barking coming from inside the property.

Footage captured on a doorbell camera shows the two boys approaching the house and opening the front door after being given the security code by their friend’s father.

Two dogs ran out of the house soon after the door was opened but Mario had to go into the property and release the third pet which was locked inside a crate.

Anthony Lombardi, 12, and Mario Comella, 13, were able to speak to the homeowner, their friend’s father John Salisbury, via the doorbell camera, allowing them to open the front door and release the three dogs safely 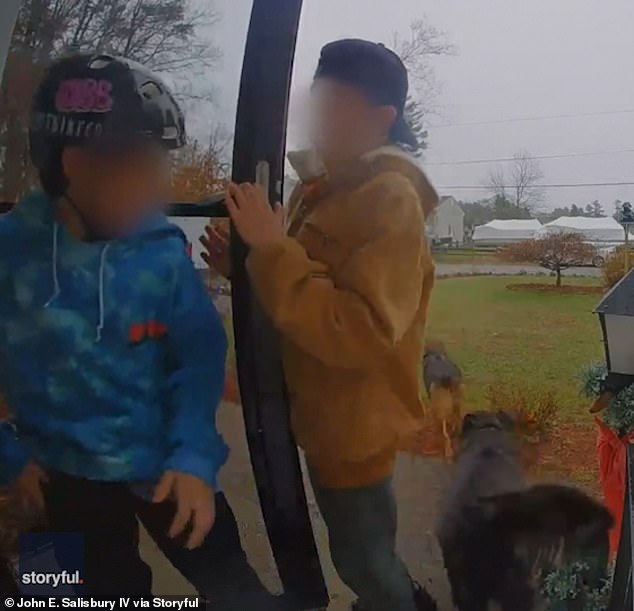 After opening the door, the first two dogs, Faith and Boo, safely ran from the house, in Coventry, Rhode Island

The video footage begins with the two boys standing with their bikes on the driveway to the property while they are on the phone to their friend.

They both then approach the house, activating the doorbell, which allows the boy’s father, John Salisbury, to speak through it and ask if they can ‘go in there quick’.

Mario is then seen entering a code to unlock the door before Anthony notices the smoke and sees the dogs inside the house.

He tells Mario to call 911 before two dogs, Faith and Boo, run out of the house.

Mario then disappears as he goes inside the property, while Anthony continues telling him to call 911.

Inside the house, Mario opens a crate to release the family’s third dog, Chase, a German Shepherd puppy.

Mario runs back outside the house and shouts ‘get out, get out’ to the dog before it finally appears and runs out to safety.

Mario is on the phone to his friend and can be heard saying: ‘I got your dogs out, I got the dogs out,’ as both he and Anthony run from the house.

With the three dogs safe, Mario then places a call to 911 while Anthony runs back to the house.

He opens the door, turns to his friend and says: ‘It’s a fire, I can smell it.’ 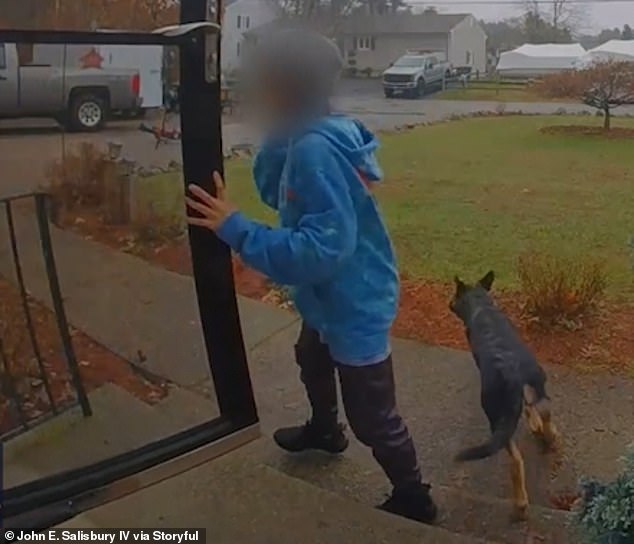 Mario ran back into the house to free Chase, a German Shepherd puppy, who was locked inside a crate. After freeing the third dog, he can be heard telling his friend on the phone: ‘I got your dogs out, I got the dogs out’

Afterwards the two boys were praised by their friend’s parents, Mr Salisbury and Athena DiBenedetto who were out for breakfast at the time.

Praising Mario, Mrs DiBenedetto told 12 News: ‘With all of the smoke billowing in the house, he didn’t even think twice. He ran in and let the dog out.’

Mr Salisbury said the fire was started when one of their dogs accidentally turned on a stove burner and it ignited a wooden chopping board.

He said the burner was turned on high and ‘smoldered for an hour’.

Mrs DiBenedetto, who said she cannot watch the security footage without getting ‘teary eyed’, said she feared to think what could have happened if the two boys arrived five or ten minutes later.

After the incident, Mario said he ran into the house to save the dogs after his uncle tragically lost his pets in a fire a year ago.

He told 12 News: ‘I was thinking, “This happened to my uncle, so I’m not going to let this happen to my friend.” ‘

Despite the positive ending, Coventry Fire Chief Frank Brown reminded people not to enter burning building and to always call 911 instead.