Two Indiana police officers have been put on administrative leave after being caught on video using a chokehold while arresting a man just days after neck restraints were banned by their department.

The mayor of Anderson, Indiana, and its police chief have revealed that Anderson Police officers Brandon Reynolds and Ashley Gravely were put on paid leave pending an investigation in the wake of the incident which occurred June 13, CBS 2 reported.

Reynolds and Gravely were seen in a video, which was posted on social media, of them arresting Spencer Nice, 21, of Frankfort, Indiana. 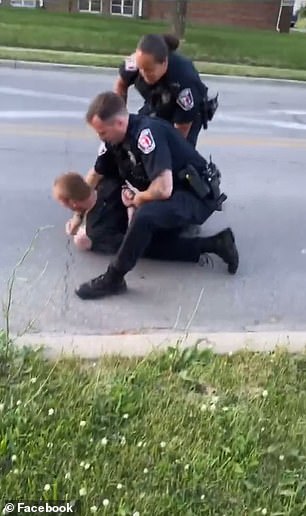 Anderson Police officers Brandon Reynolds and Ashley Gravely are seen in video as they arrested Spencer Nice, 21 (in jeans). Reynolds is seen at right using a chokehold on Nice 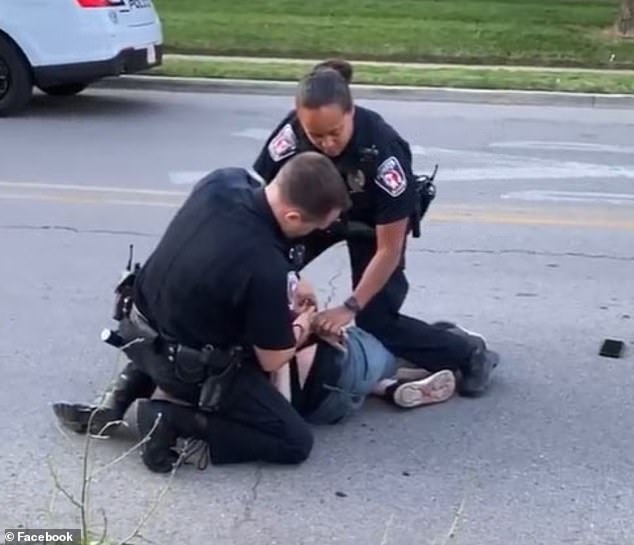 Court documents indicated that Nice resisted arrest which led to the use of the apparent chokehold. Reynolds and Gravely are seen putting restraints on Nice

In the video, Reynolds can be seen standing behind Nice, appearing to put restraints around Nice’s hands while Gravely tries to pull his cell phone out of his hands.

Nice doesn’t appear to be resisting arrest, but is in the middle of mumbling something about his phone when Reynolds suddenly wraps his arm around Nice’s neck and drags him to the ground.

The apparent chokehold lasts for about seven seconds as Reynolds and Gravely work to pull Nice’s hands behind his back while he’s on the pavement. Reynolds then lets go, but can be seen holding the back of Nice’s neck with one hand until the restraints are in place.

Reynolds’ chokehold on Nice occurred two days after Anderson Mayor Thomas J. Broderick Jr. and Police Chief Jake Brown had banned the use of chokeholds in the wake of protests following George Floyd’s death while Minneapolis police were trying to take him into custody on May 25.

In a statement released June 15, obtained by the Herald Bulletin, Broderick and Brown noted that, ‘While we want to fairly review all of the evidence we are disturbed by what is shown in the video.’

They added that ‘We will promptly act in such cases and take appropriate action for any such violations.’ 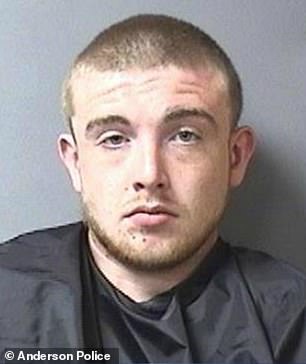 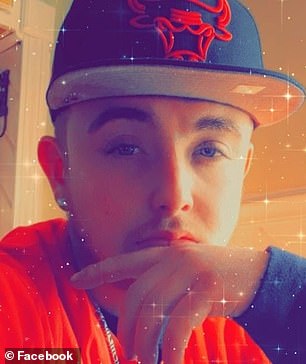 Spencer Nice, 21 (pictured), was charged with resisting arrest during the June 13 incident

The statement noted that Reynolds had been on patrol on June 13, when he heard what he believed were gunshots. He then saw Nice and three other people walking in the area.

Reynolds claimed that he saw Nice ‘throwing something black up against the side of a factory warehouse.’

Gravely, Reynolds’ backup, then arrived at the scene to help take Nice into custody, leading to the use of the chokehold.

According to the statement, police said that Nice had resisted arrest.

A court affidavit noted that police said Nice allegedly did not obey an order to put his hands behind his back.

Nice’s father, Van Nice, claimed that someone had been lighting firecrackers in the neighborhood, while Nice himself denied Reynold’s claims of having throwing something against the warehouse.

The Herald Bulletin said that over the last six years, Nice had been charged twice with resisting arrest in Clinton County, Indiana, where he lives. He pleaded guilty to one of the charges.

Nice was in Anderson visiting his father when the June 13 incident occurred.

The Anderson Board of Public Safety is conducting a hearing and would be responsible for any disciplinary action greater than a five-day suspension.

Both Reynolds and Gravely had been with the Anderson Police Department for more than five years.

When the investigation is ‘completed it will go up the chain of command ultimately to the chief who will review it and he will make his recommendations for what discipline if any would be wanted and that would most likely be present it to the safety board and then the safety board will make the ultimate decision,’ Mayor Broderick said according to CBS 4 Indy.

Indiana State law states that neither the mayor nor the police chief are allowed to terminate or dismiss an officer.

The City of Anderson said on June 18 that it would be moving forward with their plan to buy body and in-car cameras for their police officers, which they had been planning to do before being sidetracked by the coronavirus pandemic outbreak.

Nice was charged with a misdemeanor count of resisting law enforcement, which his family is asking to be dismissed.