Two television journalists have been killed after a tree fell on their news vehicle in North Carolina as they reported on the flooding and severe weather associated with Subtropical Storm Alberto.

News anchor Mike McCormick and photojournalist Aaron Smeltzer, who both worked for South Carolina’s WYFF-TV, died on Monday while on assignment.

The men were driving on US Highway 176 near Tryon, west of Charlotte, when the large, 3-foot diameter tree fell on their vehicle.

They were killed just 10 minutes after interviewing Tryon Fire Chief Geoffrey Tennant about the storm. The news crew had told Tennant to be careful given Alberto’s remnant is expected to bring more heavy rains and mudslides this week.

‘Ten minutes later we get the call and it was them,’ Tennant said, his voice cracking. 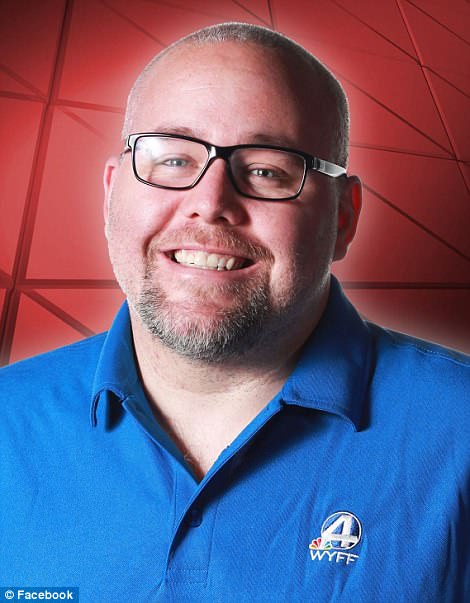 The TV vehicle engine’s was still running and the transmission was in drive when rescue crews found it. Tennant said the men died instantly and called the deaths a ‘freak of nature’.

The fire chief said he believed the roots of the tree were loosened in the ground that had been saturated by a week’s worth of torrential rain.

The deaths came as the storm lumbered ashore on Monday on the US Gulf Coast, pelting white sand beaches with blustery winds and stinging rain that kept the usual Memorial Day crowds away.

A few brief tornadoes also were possible in much of Florida and parts of Georgia, South Carolina and Alabama.

The National Hurricane Center in Miami said at 5pm EDT Monday that Alberto was centered about 15 miles west-northwest of Panama City, Florida. 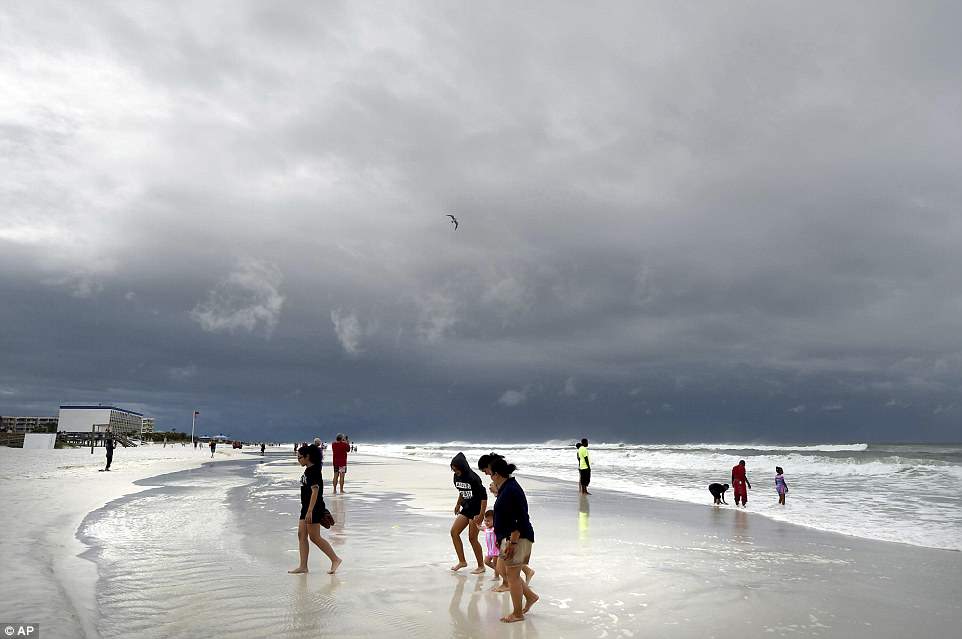 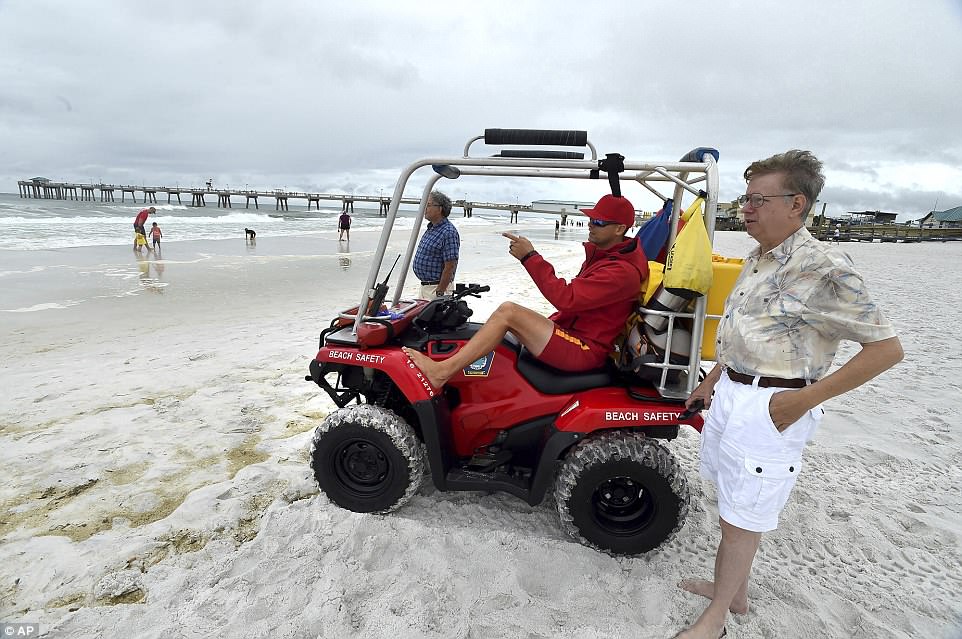 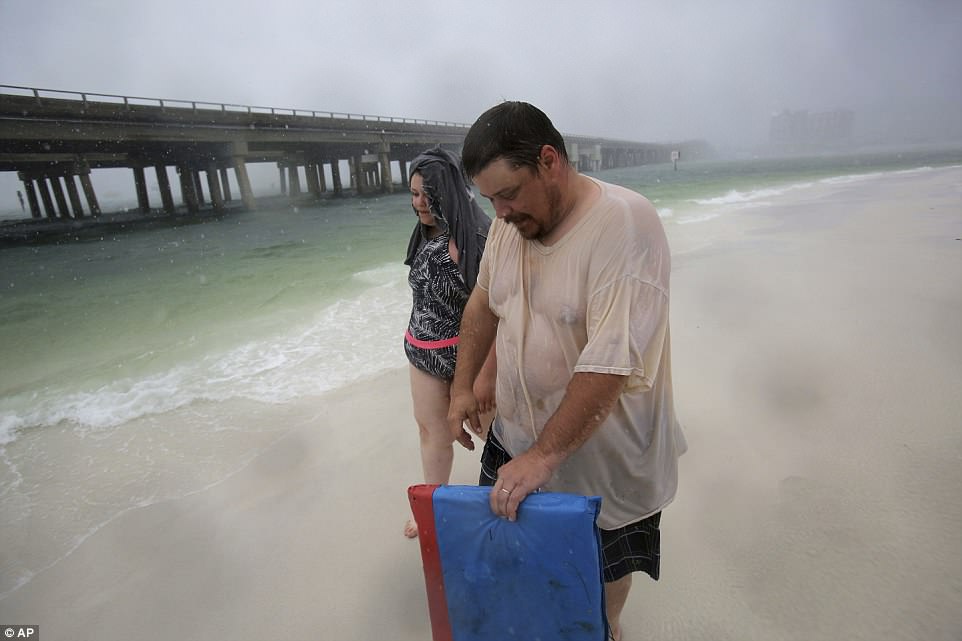 Emily Muller, left, and her father Bob walk through the rain as Subtropical Storm Alberto makes landfall on Monday 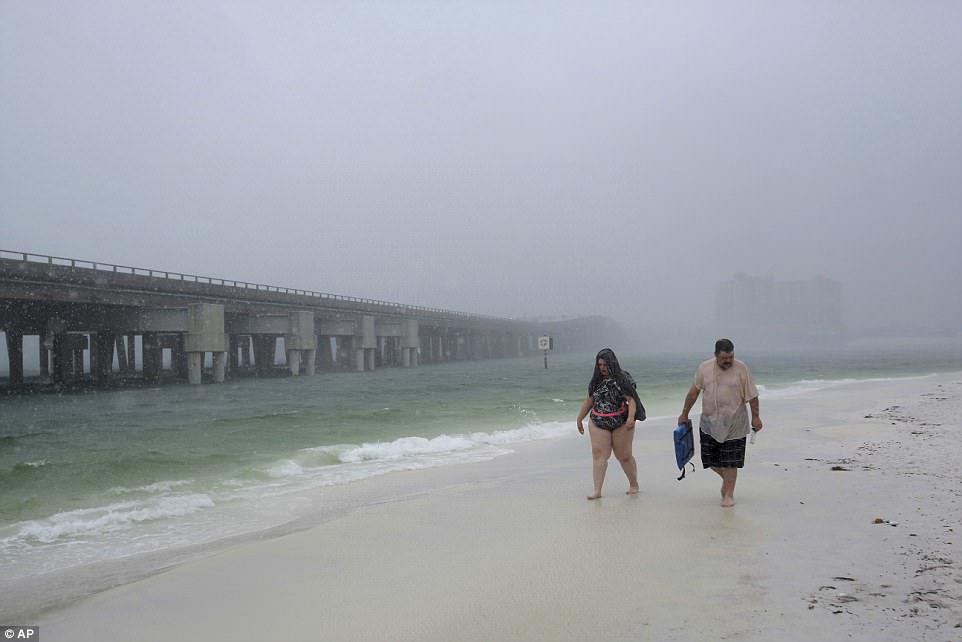 With maximum sustained winds of 45 mph, Alberto was moving north at 9 mph.

Rough conditions were whipping up big waves off the eastern and northern Gulf Coast, and authorities warned swimmers to stay out of the surf because of life-threatening swells and rip currents.

Between four and eight inches of rain could pummel Florida Panhandle, eastern and central Alabama, and western Georgia before the storm moves on.

Isolated deluges of 12 inches also were possible as the storm heads inland, threatening heavy rains around the Southeast in the coming hours and days.

As Alberto’s center heads inland – deprived of the warm waters that fuel tropical weather systems – the storm was expected to steadily weaken. 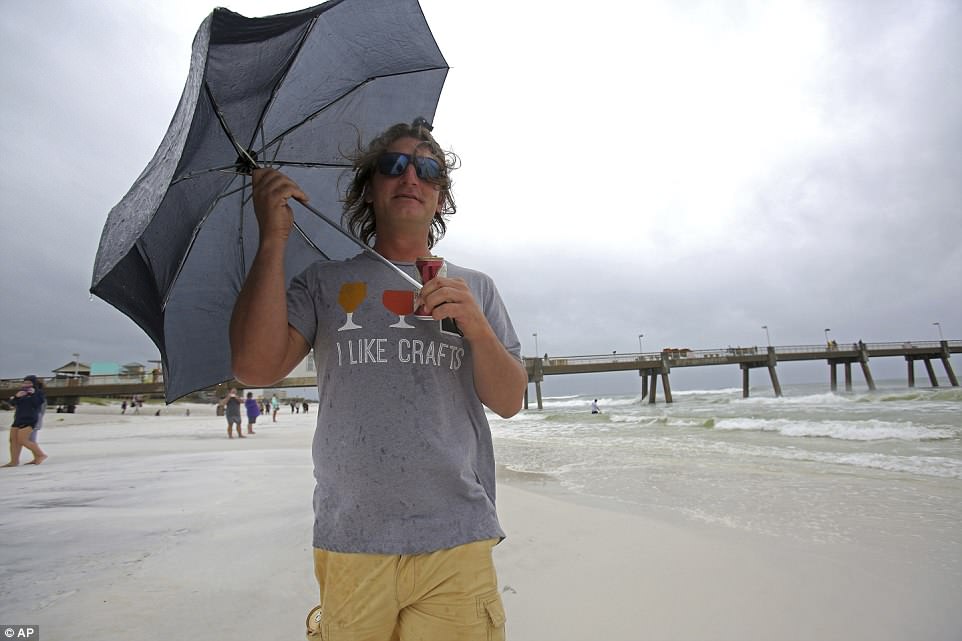 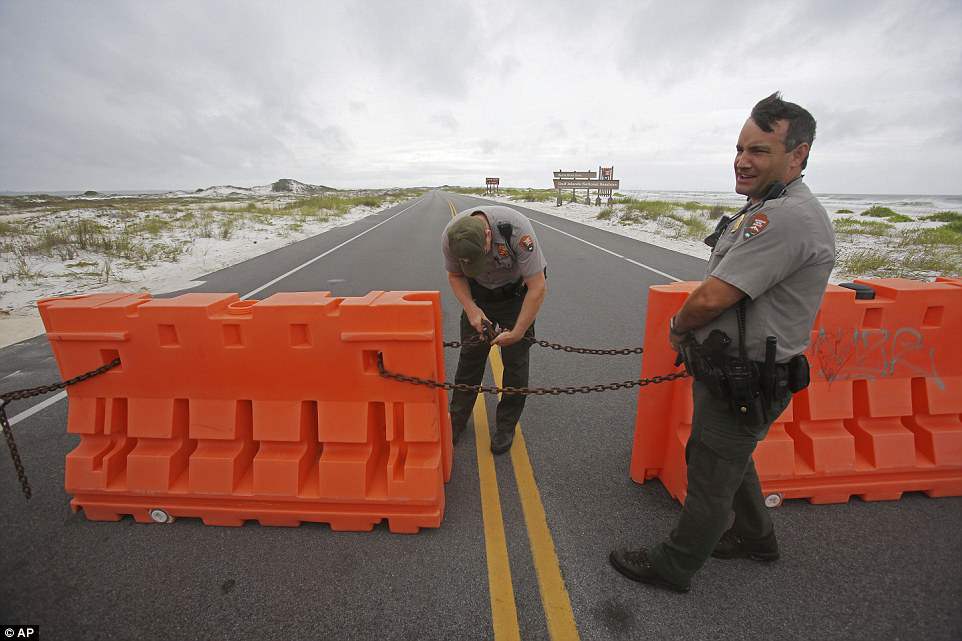 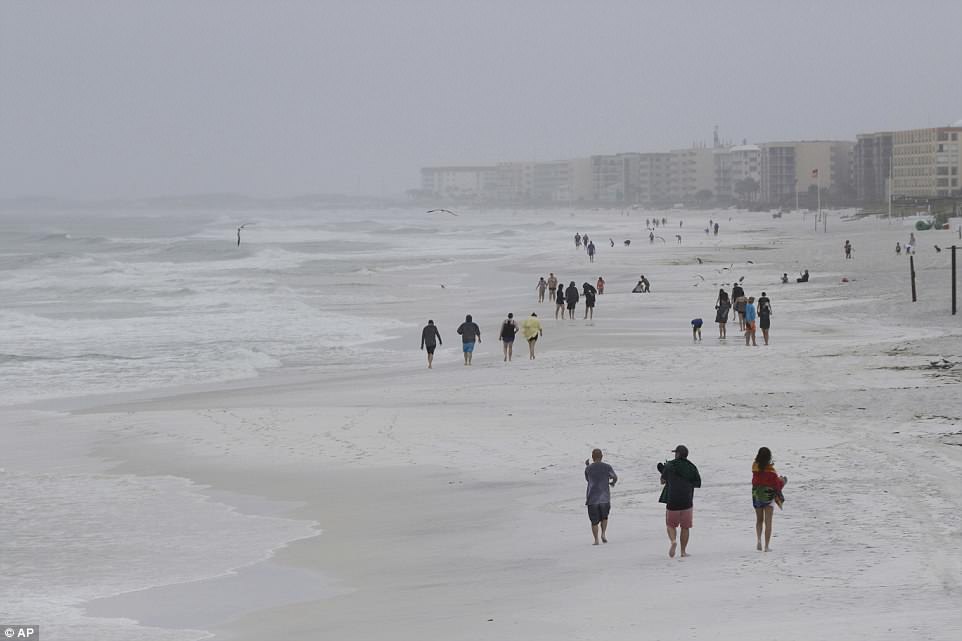 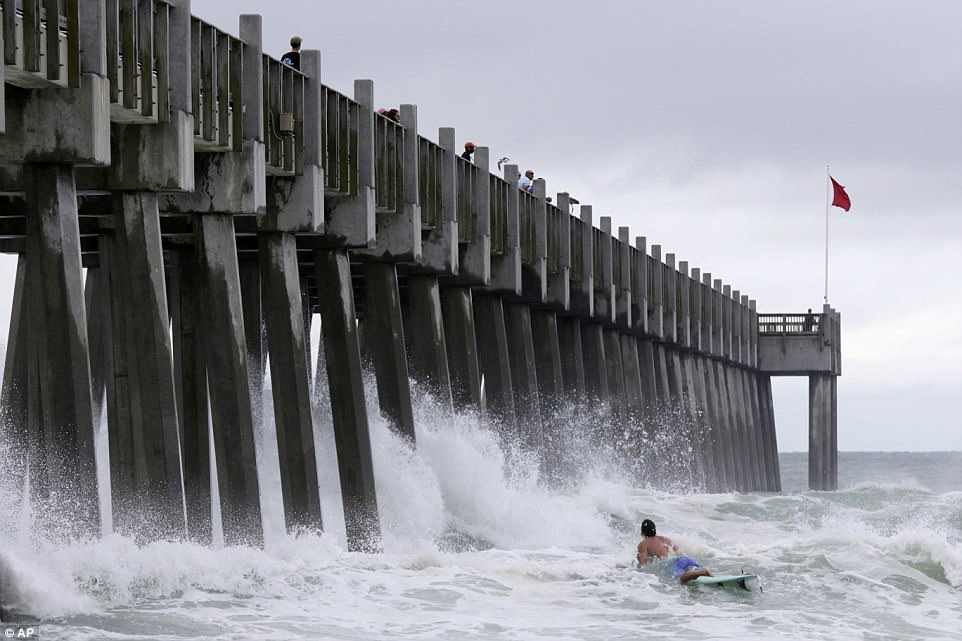 A surfer makes his way out into the water as a subtropical approaches on Monday in Pensacola, Florida

A subtropical storm like Alberto has a less defined and cooler center than a tropical storm, and its strongest winds are found farther from its center.

A tropical storm warning is in effect for a stretch of coastline between Aucilla River in Florida’s Big Bend and the Alabama-Florida border.

Lifeguards posted red flags along the white sands of Pensacola Beach, where swimming and wading were banned.

Meanwhile, the storm forced some Memorial Day tributes to be cancelled across Florida’s Panhandle.

Safety was the priority, but the decision was still a ‘heartbreaker,’ said Tom Rice, a 29-year-old Army veteran who leads the organizations that planned a ceremony Monday at Beal Memorial Cemetery in Fort Walton Beach.

Some stragglers still made their way through the rain to pay tribute at the cemetery’s Veterans Tribute Tower, however.

Rice said American flags had been placed Saturday on the graves of all 1,700 veterans buried in the cemetery.

‘We got the flags out,’ Rice told the Northwest Florida Daily News as wind whipped a massive U.S. flag flying at half-staff. 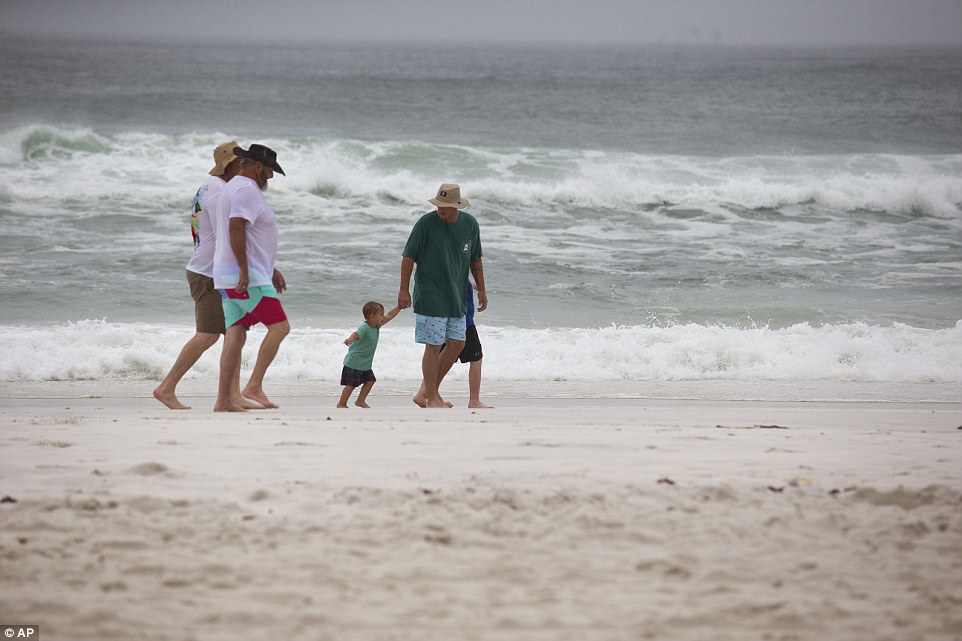 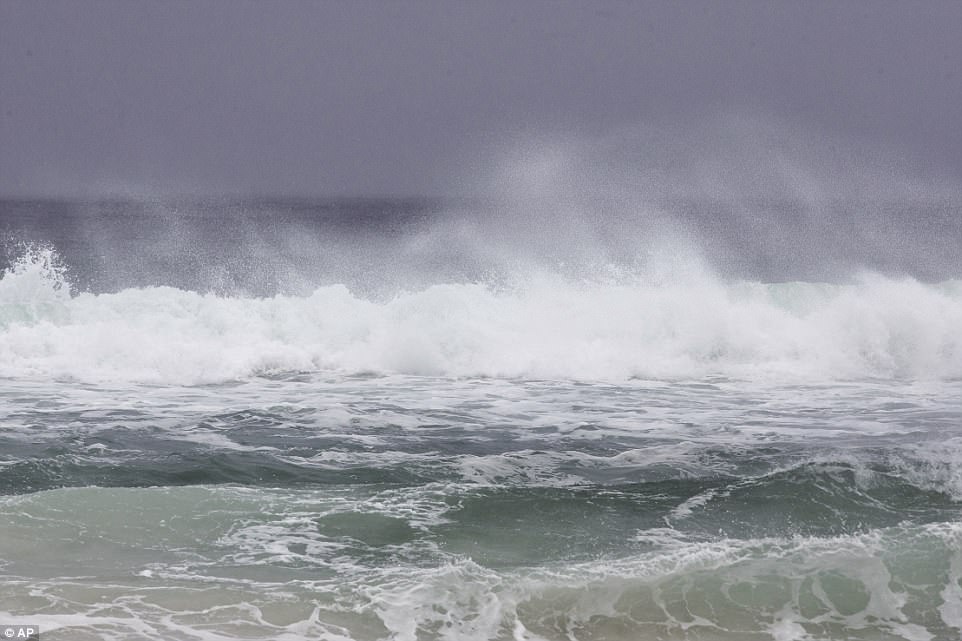 Rough conditions were whipping up big waves off the eastern and northern Gulf Coast, and authorities warned swimmers to stay out of the surf because of life-threatening swells and rip currents 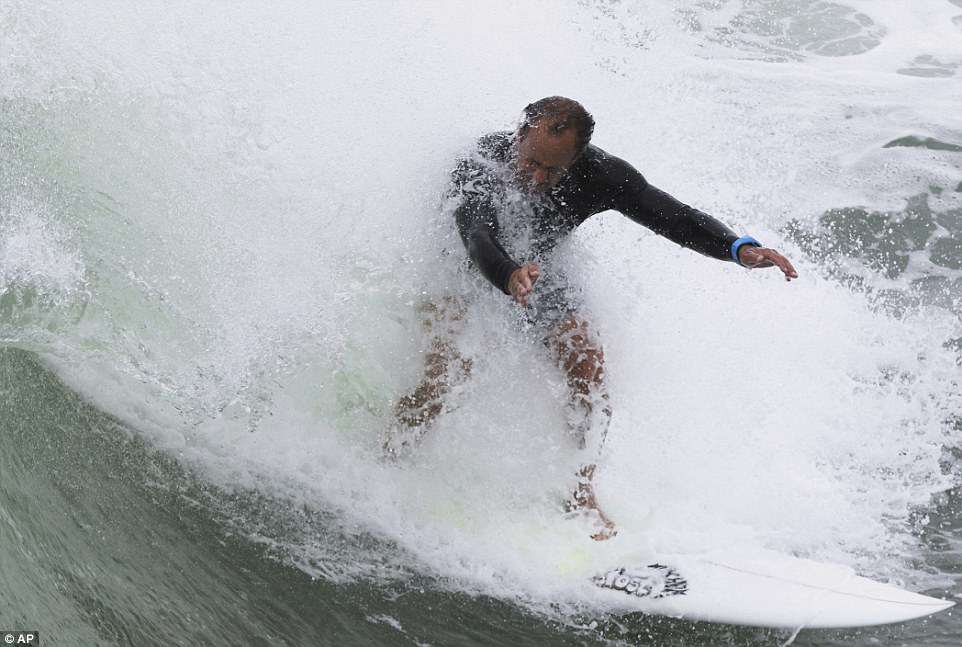 Jason Powell said he was seeking to keep his children entertained until Alberto blows past his Panhandle vacation spot.

‘So far we’ve seen a lot of wind and the ocean is really high, covering up the entire beach,’ Powell said.

‘We’re not letting it ruin our vacation … we’re going to watch some movies inside and a little TV, and hopefully maybe even get into the pool’ despite the rain.

Janet Rhumes said her group of friends from Kansas had been planning their Memorial Day weekend on Navarre Beach since October.

They stocked up on groceries and planned to play card games. No storm could deter them.

‘So how often can you say you rode a storm out?’

Instead, red flags flew on Alabama beaches and officers patrolled, making sure no one entered the water. 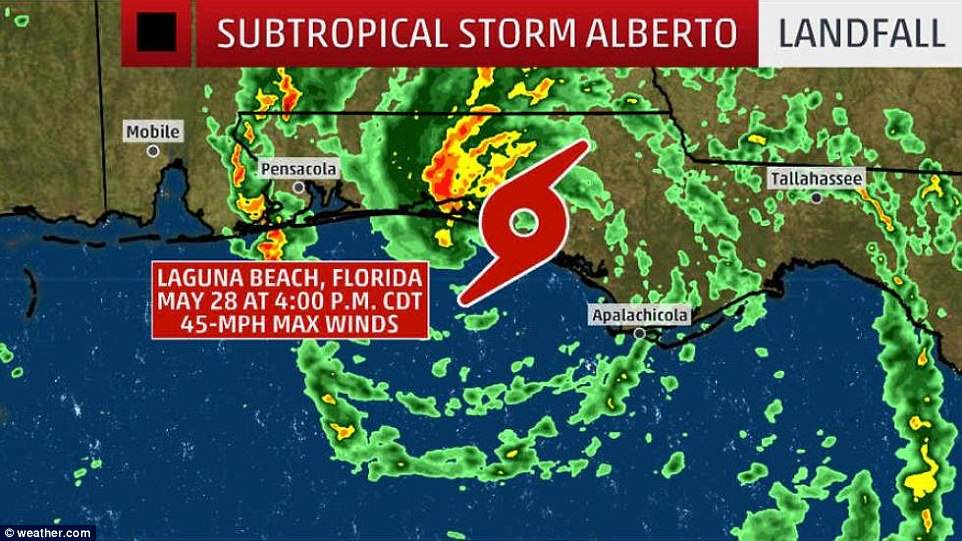 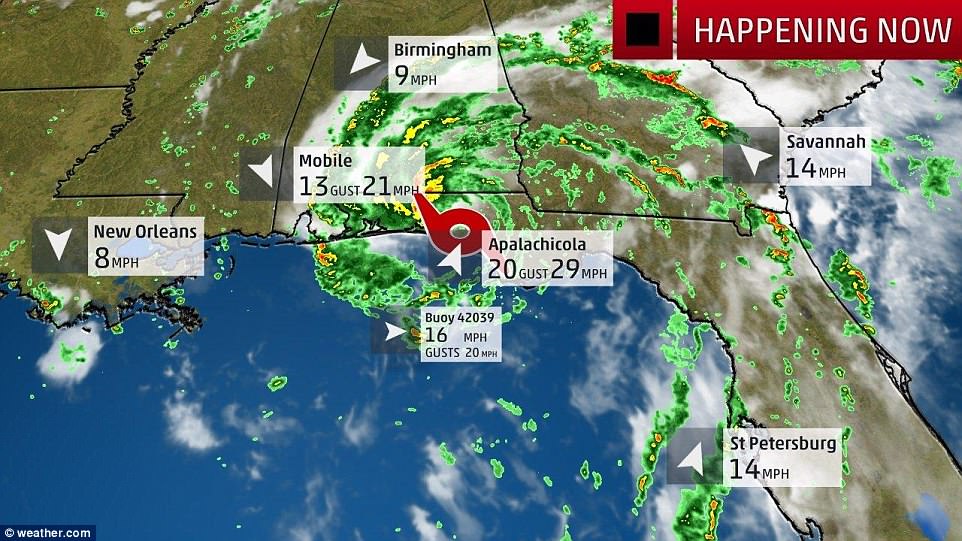 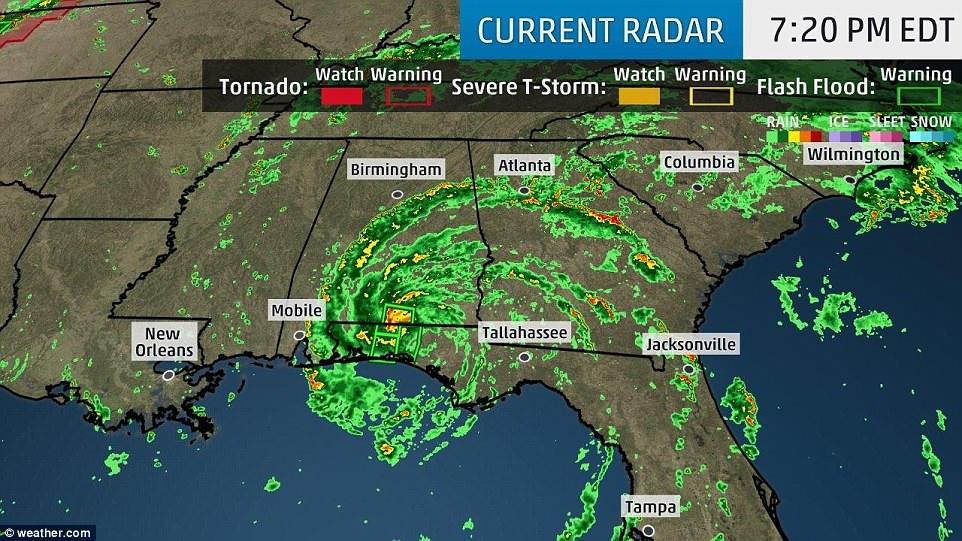 So far, Florida, Alabama, and Georgia have been hit with rainfall since the storm made landfall on Monday 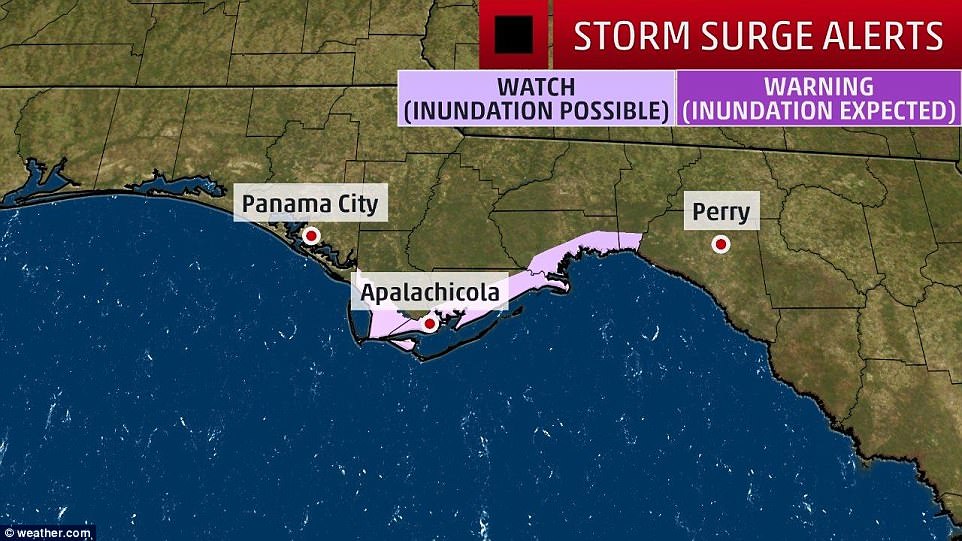 Storm surge alerts have been issued for the coastal area stretching from Panama City to near Perry, Florida 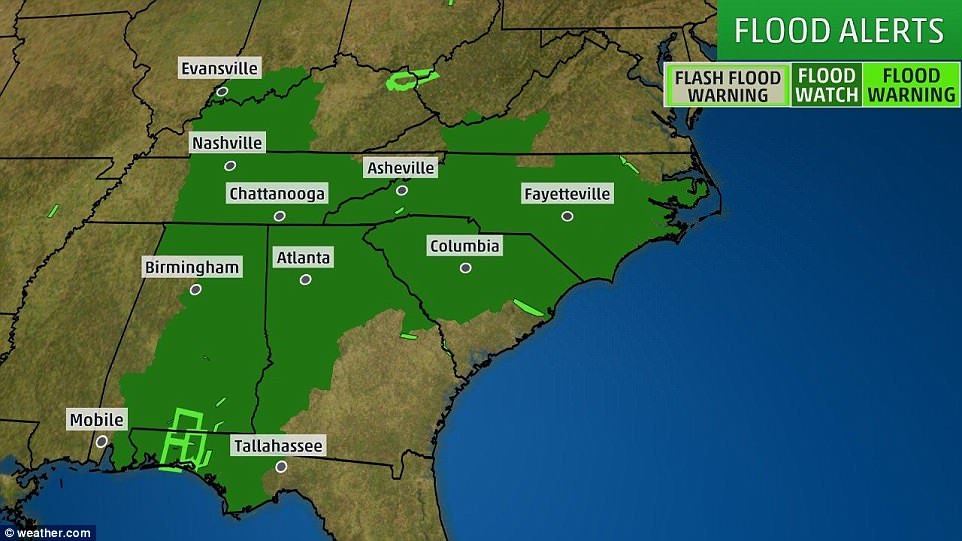 Flash flood warnings and flood watches are in effect for large swathes of the Southeast, stretching up to Tennessee and the southern tip of Indiana 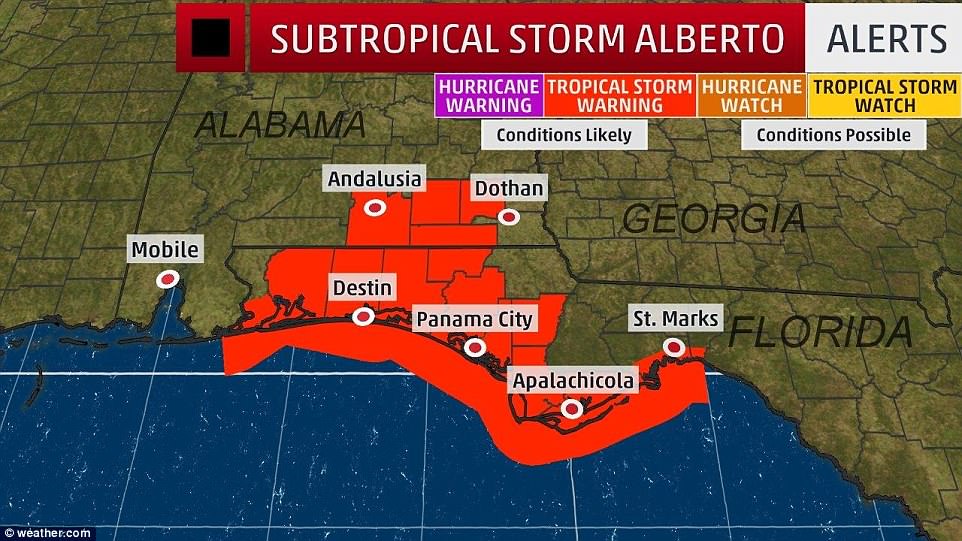 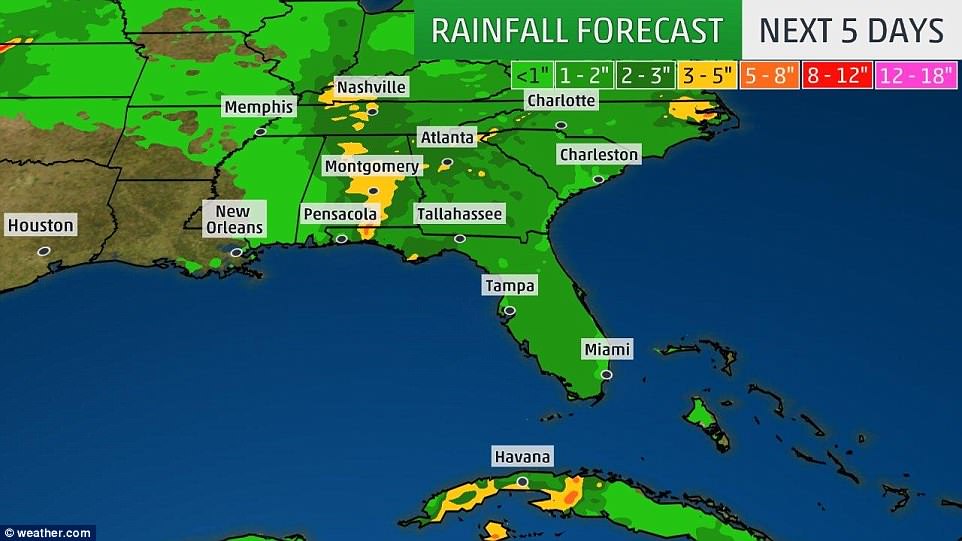 Forecasts for the next few days call for a few inches of rain, with the Montgomery area expected to be hit with the most precipitation 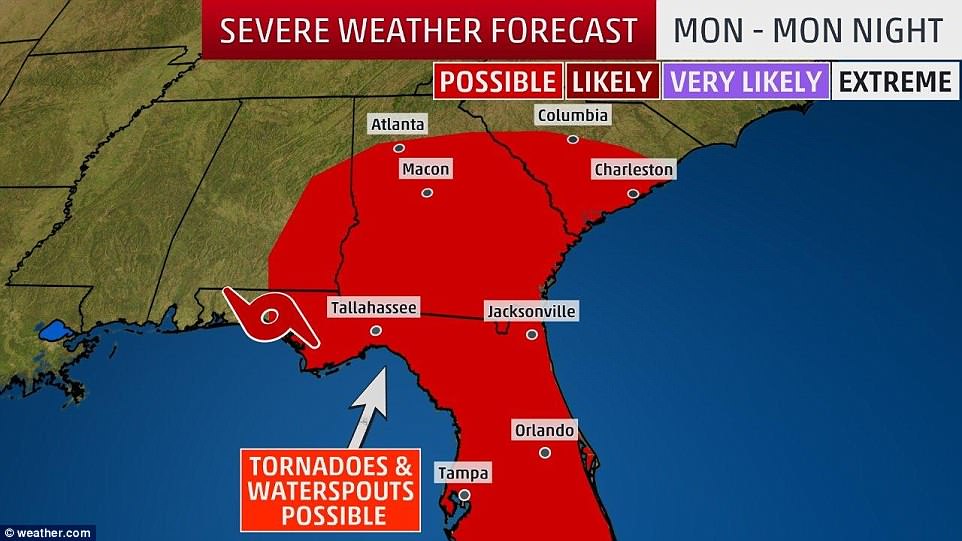 Elsewhere, Florida’s Division of Emergency Management said, about 2,600 customers were without power in northwestern Florida on Monday morning.

Scarlett Rustemeyer, a barista at the Fosko Coffee Barre in Pensacola Beach, said she always frets about power outages whenever storms bluster through.

‘My boyfriend and I usually try to go to the store and stock up on lots of bottled water, and get like canned goods and things that won’t go bad if our power goes out,’ she said.

Alberto, the first named storm of 2018, got an early jump on the Atlantic hurricane season.

The National Oceanic and Atmospheric Administration released the annual hurricane season forecast Thursday in which they call for 10 to 16 named storms, with five to nine hurricanes.

One to four hurricanes could be ‘major’ with sustained winds of at least 111 mph.

If that forecast holds, it would make for a near-normal or above-normal season.