A father and son drowned when their rescue boat flipped as they tried to save a tourist floundering in the ocean.

The man was swept off rocks near Port Campbell in Victoria by a big wave as he was taking photos at the mouth of the Sherbrook River about 10.40am.

The rescue crew of three men from Port Campbell Surf Lifesaving Club rushed to his aid in rough seas but their vessel flipped over, dumping them into the water.

An emergency helicopter winches the surviving lifeguard to safety. He was then rushed to hospital with serious back and leg injuries

An emergency helicopter winched the 30-year-old Singaporean tourist and one of the rescuers to safety but the other two drowned.

Their bodies were later found in the water and both were declared dead at the scene.

The surviving rescuer, aged in his 50s, was rushed to hospital with serious back and leg injuries while the man he tried to save was in a stable condition.

Ian McCauley, on holiday from Melbourne with his wife to see the Twelve Apostles, witnessed the surviving rescuer be saved from the waves. 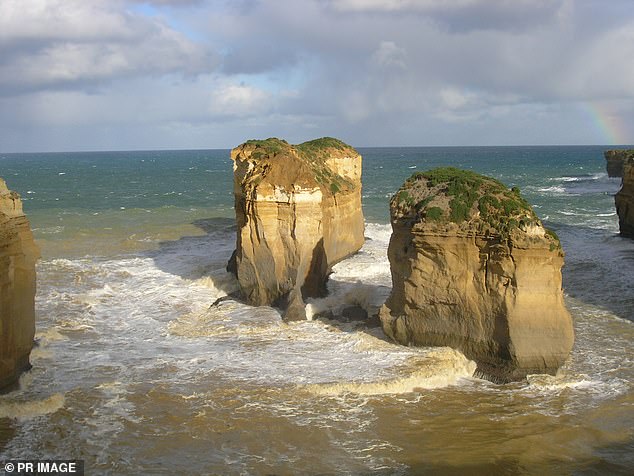 ‘He had lowered a rescuer in to the water who swam across and grabbed hold of the person in the water and they were both winched out.’

Mr McCauley said they were only 50m away from very rough swells breaking against the cliff face.

‘The rescuer was very much putting his life in great danger. If it wasn’t for their bravery, more people would have died,’ he said.