Las Vegas police shot and wounded two young men in a car in a high school parking lot after they struck a student with their vehicle and ignored orders to stop, authorities said Tuesday.

Western High School, located at 4601 W Bonanza Road, was letting out about 2:15pm when cops got a call about a fight involving someone in a car with a weapon in the parking lot, according to Clark County School District Police Lt. Bryan Zink.

Students were boarding school buses and getting picked up when the officers arrived and saw a car traveling at a ‘high rate of speed’ into the eastern parking lot.

The officers ordered the car to stop, but it kept going southbound through the lot then pulled a U-turn, heading back toward the officers.

Student were forced to flee for cover as the vehicle sped through the crowded lot, clipping a female student who was trying to get out of the way.

‘The vehicle struck the student, who I am happy to say is not injured seriously,’ Zink said during a press conference.

Seeming to ignore the commands to stop, the car and driver charged on through the lot toward the officers, prompting one of them to open fire on the two young men. 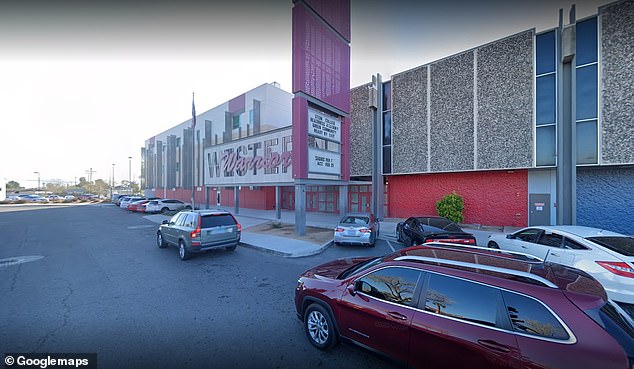 Wester High School, pictured here, was letting out when the violence erupted. The parking lot was full of students boarding buses and catching rides home 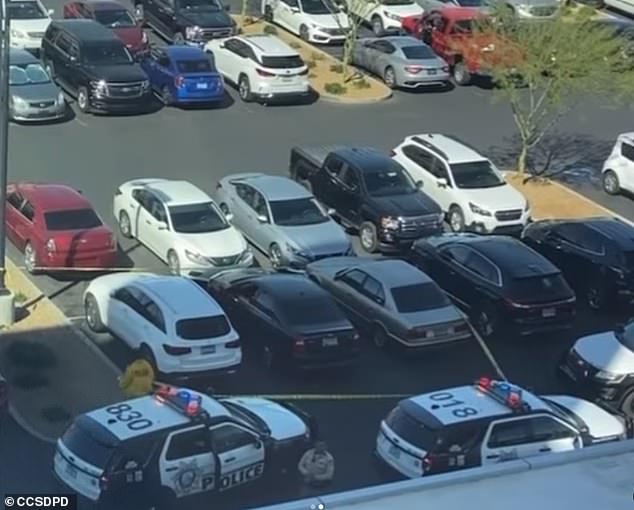 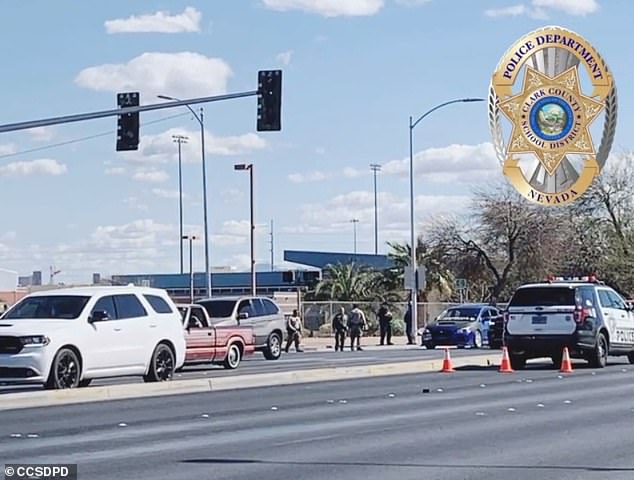 The young men were wounded when they sped out of the high school parking lot and fled the scene. Police, shown here, are investigating the police use of force

‘The vehicle continued at a high rate of speed toward the police officers, they gave orders for the car to stop,’ Zink said. ‘One of the officers pulled his service weapon and fired rounds at the car.’

Still, the car did not stop and continued to speed out of the lot.

A dramatic police emergency dispatch recording catches the frantic officer at the scene.

‘Shots fire, shots fired,’ he says, describing the car as a black Ford Fusion with Arizona plates fleeing eastbound from the high school.

Later, the boys’ relatives took them to Sunrise Hospital and University Medical Center, where they are expected to survive their wounds, police said.

The boys, whose name and ages were not made public, are not believed to be Western High School students.

The Las Vegas Metropolitan Police Force Investigation Team will investigate the shooting and report back to the school district police in 72 hours.

The name of the of the officer who fired at the boys was not revealed.

A briefing on the shooting for the public is expected on Monday.