Emergency services rushed onto the tarmac at Heathrow Airport after two planes reportedly crashed into each other while taxiing this evening.

It is believed Korean Air 777 plane ‘scraped into’ an Icelandair 767 jet, an eye witness clarified that it wasn’t a ‘full on’ collision.

The incident is thought to have occurred between the two planes while taxiing.

A picture appears to show the considerable damage done to the Icelandair’s tail by the Korean Air’s wing.

One passenger wrote on Twitter: ‘Pretty sure we scrapped another plane with our wing tip while taxiing.

‘We have been told that we are going back to the gate due to a technical issue.

Another person who was also on board said there was ‘No apparent danger’ and that ‘nobody’ was hurt. 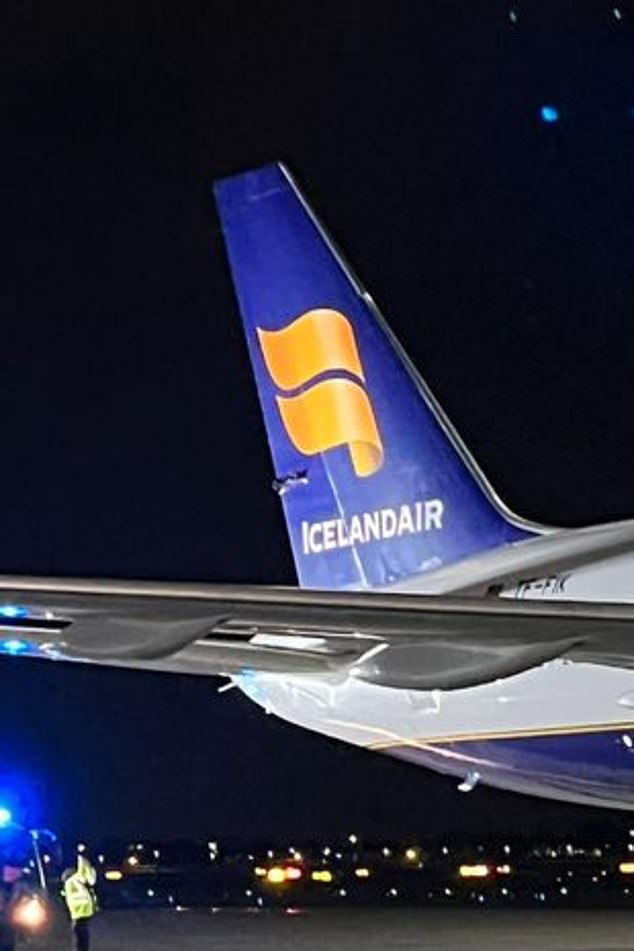 An Icelandair plane was involved in the incident, its tail appears to show some damage from the Korean Air’s wing

Another passenger added: ‘We hit another plane while taxiing. I saw it out the window. Wingtip scrapped the tail of another plane.’

While a third said: ‘Surrounded by about ten police cars and a couple of fire engines.

‘Apparently the plane has “a technical problem”.’

The same user added: ‘can’t say we felt anything from the inside. No apparent danger, nobody hurt’.

Were you onboard either of the planes?

A passenger on the Korean Air flight told the Daily Star: ‘I was watching out the window thinking we were awful close to the tail for a parked plane.

‘The captain hasn’t really told us much except we are going back to the gate due to a technical issue.

‘But the last communication was about 45 mins ago.’

Richard on Twitter said: ‘I’m on the flight they are blocking. We were taxiing to the runway and then suddenly got stopped by all these emergency services.’

‘We are now being told we are returning to the gate due to a technical issue.’

A spokesman for Heathrow Airport said: ‘Emergency services are attending an incident involving two aircraft on the airfield.

‘No injuries have been reported but emergency services are attending to ensure all passengers and crew are safe and well.’

The incident is under investigation.

Were you onboard either of the planes? Let us know what happened, email: matt.powell@mailonline.co.uk.