An exam security breach that saw A-level questions shared on Twitter has resulted in the arrests of two people.

Two further maths questions were leaked on social media in posts that promised pupils the entire Edexcel paper for £70.

The June 14 exam had to be withdrawn and replaced and the Twitter account in question was deleted. 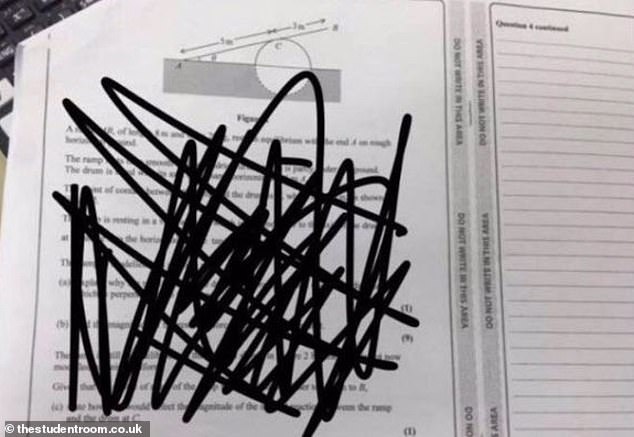 Pictured: The section of the paper leaked on Twitter, where pupils were promised the full exam if they paid £70

A spokesperson for Pearson, the company that operates the exam board, said today that the Met Police have arrested two people.

They said: ‘Following a serious security breach at a Centre involving the breach of an A level maths paper in advance of an exam sat on June 14, Pearson has been informed by the police that they have arrested two individuals and are detaining them for questioning.’

‘The actions we have taken to strengthen our security processes has enabled us, in conjunction with the police, to quickly identify those who we believe were involved in the breach and to take swift and immediate action.

‘We are systematically working through all leads and, as we continue to investigate the suspects, this will enable us to further hone in on anyone that has gained an advantage, and take action accordingly. Our key priority is ensuring no students are disadvantaged in any way.’

Pearson replaced another maths A-level paper which was due to be sat by 7,000 students, in the wake of the breach.

It came after similar leaks in 2017 and 2018 when A-level maths papers were put up online ahead of the tests.

The leaks were probed by the police and evidence was passed to the Crown Prosecution Service for consideration over whether criminal charges should be brought.

Earlier this year, Pearson said it would be trialling a scheme where microchips were placed in exam packs to track the date, time and location of the bundles.

The company faces scrutiny from the regulator Ofqual, as a spokesperson branded the alleged breach ‘completely unacceptable’.

Ofqual said that a team is now monitoring the investigation conducted by Pearson as well as the approach the company takes to awarding the qualification. 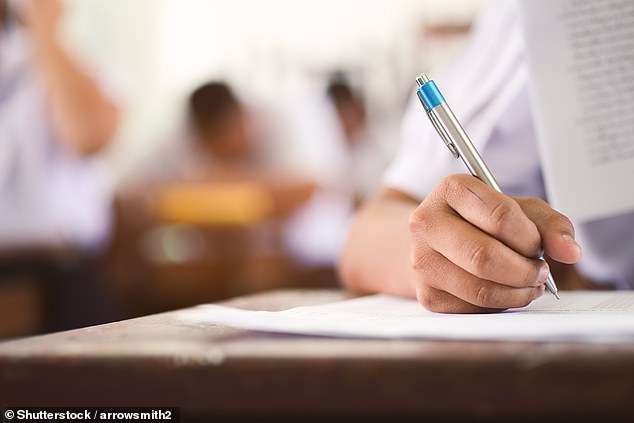 Just days before the breach emerged in June last year, pupils launched two petitions have been launched in protest over previous Edexcel maths A-level papers, sat on June 5 and 12.

Teenagers claimed questions were ‘deeply unfair’ and ‘unreasonable’ because they were vastly different from those in specimen papers and textbooks.

One petition claims ‘students’ hopes of attending university have been shattered as a direct result of Edexcel deeming it appropriate to abandon the specification taught over two years’.

It demands that students are awarded their target grades regardless of how they performed.

A larger petition, signed by more than 11,000 students, calls for ‘special consideration’ when papers are marked to give students ‘a chance’ at their future.

It states: ‘This is because the maths papers this year (specifically paper two) were extremely difficult and unreasonable. They were unlike any specimen, past or textbook questions.’

Students claimed on social media the papers were ‘poorly written’ and impossible to prepare for unless they were also studying further maths.

Some were stumped by questions on logarithms, while others could not understand why the ‘sigma’ symbol – the eighteenth letter in the Greek alphabet – kept appearing in the exam.

A teenager said on Twitter: ‘They deliberately put in confusing language in order to mess us up and using integration signs from the 1800s isn’t helpful at all.’

A spokesman said: ‘Candidates should be reassured that the paper reflected the specification, and that we set the grade boundaries for each exam paper each year to adjust for any differences in demand from one year to the next. 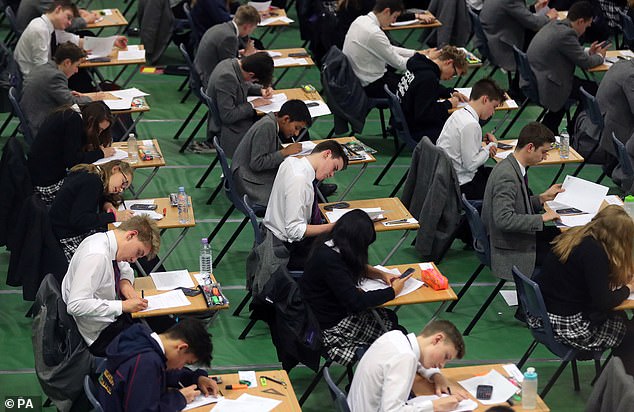 ‘This ensures a fair system, so that students of the same ability will get the same grade in different years.’

Pearson also came under fire after it emerged that a question in a GCSE maths paper is almost identical to one from another board’s revision textbook.

In its GCSE maths paper three, Edexcel included a question with the same diagram, values and answer as a question from the textbook AQA Certificate: Further Maths.

Pearson said it was ‘investigating how this might have happened’ and has ‘established processes in place to ensure no one will be advantaged or disadvantaged’.

On Tuesday, it was forced to defend a GCSE maths question that involved working out the number of calories in a breakfast amid criticism on social media.