Two women were today rushed to hospital after a double stabbing inside a Marks & Spencer store in Burnley.

A local man, 57, was arrested on suspicion of attempted murder following the attack at around 9.30am today, Lancashire Police said.

The two victims were taken to hospital with ‘serious but not threatening’ injuries.

The stabbing came as shoppers flocked back to the High Street today after the national coronavirus lockdown was lifted and non-essential shops reopened.

Footage from the scene captured a man in a face mask being detained by officers outside the store in Lancashire at around 9.30am today.

Witnesses claimed a girl was stabbed in the neck during the attack, but this has not yet been confirmed.

Police and the North West Ambulance Service raced to the store near St James’ Street following reports of the double stabbing this morning.

Pictured: A man is arrested outside a Marks & Spencer store in Burnley today after a double stabbing took place inside 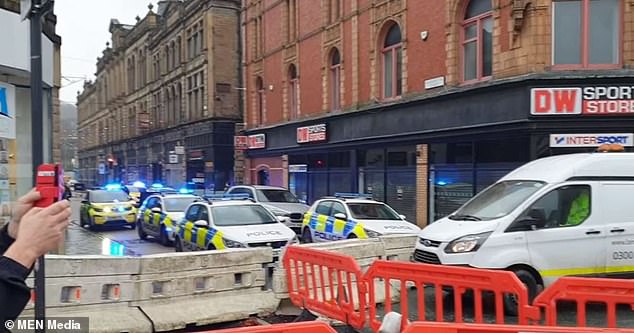 Two people were today rushed to hospital after a double stabbing inside a Marks & Spencer store in Burnley. Pictured: The scene

A cordon is in place in the area and other clips show a crowd of onlookers gathering near the Charter Walk Shopping Centre.

St James’s Street remains closed in both directions between Brown Street and Hammerton Street in the town amid the ongoing police incident.

Lancashire Police confirmed nobody else is thought to be involved in the attack but asked anyone with information to contact officers.

A force spokesman said: ‘We are currently dealing with an incident at Marks and Spencer in Burnley where two people have received stab injuries.

‘Their injuries are described as serious but not life-threatening. One man has been arrested and is in custody at this stage.

‘Nobody else is thought to be involved. A cordon is in place and we would ask people to avoid the area.’

Anyone with information is asked to call police on 101, quoting log 0313 of December 2. 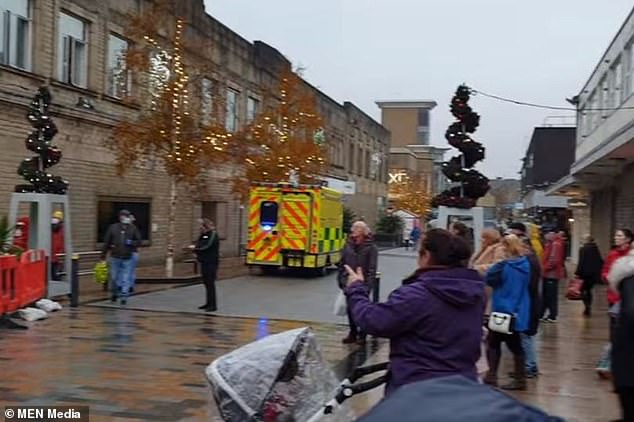 A man was arrested following the attack which left two people with ‘serious but not threatening’ injuries, Lancashire Police said. Pictured: The scene