Two people overdose at school set up as emergency shelter

Two people have overdosed at a school in Florida set up as an emergency shelter for Hurricane Irma evacuees.

First responders were forced to transport them from Park Vista High School to area hospitals.

Many of those staying at emergency shelters in Palm Beach County have also reported people stealing and fighting.

Irma, weakened to a tropical depression, is expected to push into Alabama, Mississippi and Tennessee over the next two days

Michael Maradeo, who stayed at one of the 13 shelters with his parents and younger siblings, described how some areas of the shelters weren’t suitable for children.

He told the Sun Sentinel: ‘I saw people rolling blunts and I also realized a lot of people were overdosing on a lot of drugs because I saw a lot of wobbling people.

‘I saw one guy standing in line falling over and everything, so I asked him if he was OK, and he kept changing the story.’

Additionally, sources who work for the county say shelters are receiving an influx of individuals from sober homes.

‘Since sober homes are unlicensed and unregulated in the state of Florida, they are not required to notify shelters when they drop off recovering addicts,’ said State Attorney Dave Aronberg.

Delray Beach has a high concentration of sober homes in the area, and people working for the county say that is where the majority of individuals living in sober homes are seeking shelter.

Mr Aronberg says shelters are aware of the issue, and have been equipped with extra Narcan.

‘If you are staying at a shelter, do not be alarmed,’ Aronberg told Contact 5 Investigator Merris Badcock. ‘These shelters are very well run, and have a lot of law enforcement on site.’ 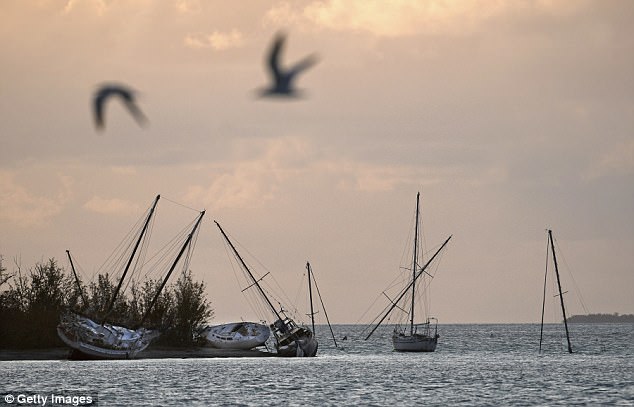 Six deaths in Florida have been blamed on Irma, along with three in Georgia and one in South Carolina.

At least 35 people were killed in the Caribbean.

More than 180,000 people huddled in shelters in the Sunshine State and officials warned it could take weeks for electricity to be restored to everyone.

Irma, weakened to a tropical depression, is expected to push into Alabama, Mississippi and Tennessee over the next two days.