Two people have been murdered and a policeman stabbed in another night of violence across ‘Wild West Britain’.

The British Transport Police officer was on duty outside Ilford railway station in East London when he was attacked by a man with a knife.

He was rushed to hospital by ambulance after the shocking assault on Friday night and is now recovering from his injuries at home, while a suspect has been arrested.

Colleagues leapt in to restrain the knifeman. Nigel Goodband, chairman of the British Transport Police Federation, said: ‘I wouldn’t like to have imagined what could have happened if they weren’t in close proximity.’

Early yesterday morning, a man was fatally stabbed in one of the capital’s most fashionable districts.

The victim, in his 20s, was found by paramedics suffering from stab wounds in Kingsland Road, Shoreditch, at 6.30am.

He was taken to hospital but died later in the morning, leading to what is thought to be London’s 123rd murder investigation this year.

And a woman was also found stabbed to death at a house in St Helens, Merseyside, yesterday morning. Police believe the 29-year-old was killed by someone she knew and are now hunting for the suspect.

Detective Chief Inspector Ian Warlow said: ‘We believe the offender is known to the victim and a search is ongoing to find him.’ After the knife attack on the British Transport Police officer, Chief Constable Paul Crowther said: ‘This is an example of the disturbing reality our officers face every day.

‘We would like to thank the public for their many get-well messages and support. 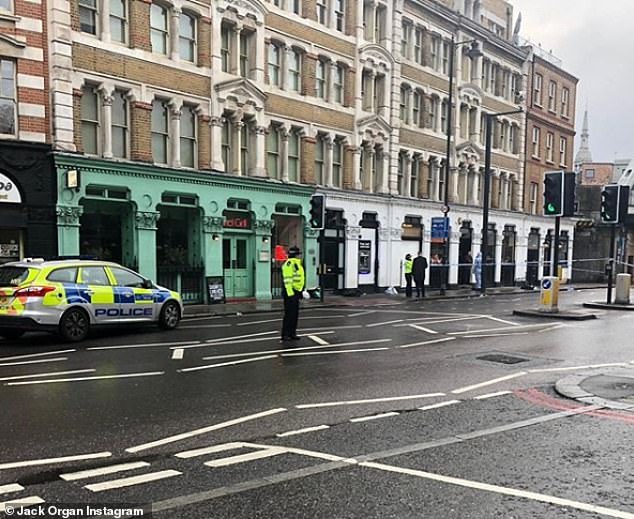 Police and forensic officers could be seen on Kingsland Road following the stabbing, as they looked for evidence

‘I know this will have had an impact on his family, friends and colleagues. The safety of our officers is extremely important to us and I’m in discussions with my senior team to see what needs to be done to ensure these incidents are kept to a minimum.’

Elsewhere, four young men were seriously injured in Leicester in the early hours of yesterday.

A 19-year-old suffered ‘life-threatening’ injuries, while a 21-year-old and two 18-year-olds were also badly hurt in what police said was a ‘multiple assault’. 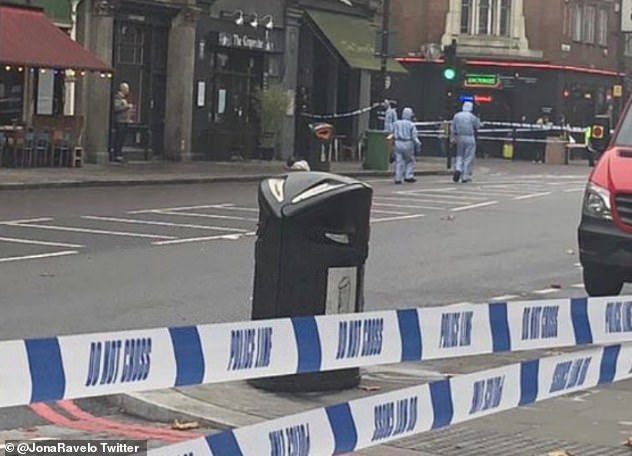 Detective Inspector Jim Hatton said: ‘An investigation has been launched to find out how these men suffered serious injuries.’

Meanwhile, three burglars armed with guns and knives broke into a pensioner’s home in Doddinghurst, Essex.

Police said they left empty-handed following a scuffle with an elderly man and his neighbours. Two men were taken to hospital with cuts.