Two police officers and another man are in serious condition after they were ‘deliberately’ rammed at high speed as they carried out a roadside stop.

The officers, a man and woman, were detaining a man on suspected drugs offences when a Mercedes approached them at high speed, police said.

As the officers questioned the man on the roadside, they were rammed by the Mercedes in what police described as a deliberate act.

All three were taken to hospital with serious injuries, Sussex Police said. The Mercedes driver escaped on foot.

A neighbour said she was awoken by a ‘crash’ and heard raised voices and someone shouting ‘look what you’ve done’.

As the officers questioned the man on the roadside, they were rammed by the Mercedes in what police described as a deliberate act (pictured, the crime scene today)

A 20-year-old man believed to be the Mercedes driver was arrested on suspicion of attempted murder.

The three men were rammed during a routine drugs check at the side of the A259 at Littlehampton in the early hours of Monday morning.

Police have appealed for two men who were passengers in the car the officers pulled over to come forward.

Wendy Egan, 64, who lives nearby, said: ‘The crash woke me up and then I heard raised voices.

‘I heard a female yell out ‘look what you’ve done’.

‘I then saw blue lights flashing outside the bedroom window, so looked outside and could see several police cars.

‘I put my robe on and went outside.

‘Over the next half hour or so, many more vehicles turned up. 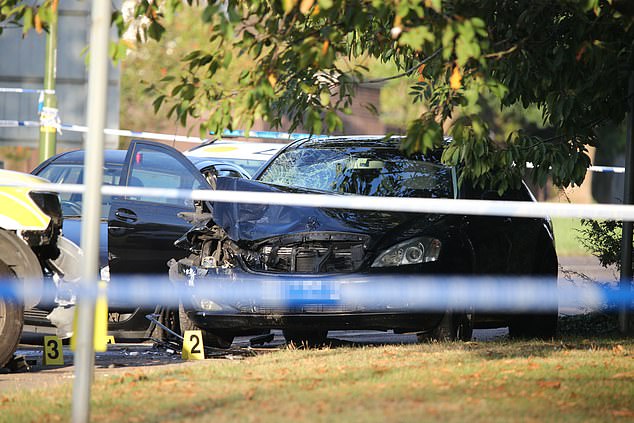 As the officers questioned the man on the roadside, they were rammed by the Mercedes (pictured) in what police described as a deliberate act

‘At one point there were at least 17 police vehicles, two fire engines and I think two ambulances.

‘All had their lights flashing and most arrived with sirens going.’

Assistant Chief Constable Julia Chapman said: ‘This is being investigated as a deliberate attack on two police officers in the course of carrying out their duties.

‘Their injuries, and that of the man they were with, whilst serious, are not believed to be life threatening.

‘Two passengers in the car remain outstanding and we urge the public to help us trace and bring to justice all of those involved.’

The incident occurred at the Bodyshop roundabout on the A259 at Littlehampton at approximately 1.05am.

Police are appealing for anyone who saw what happened or who has any other information to contact the police online or by calling 101, quoting Operation Oxbridge.