BREAKING: Two police officers killed in a shooting with a gunman who ‘set a house on fire’ in Honolulu

At least two Honolulu police officers are dead Sunday when an active shooter opened fire on authorities before the suspect allegedly set a house on fire.

The Honolulu Police Department are continuing to search for a suspect that fatally shot two officers during a unclear confrontation at a Diamond Head home near Poni Moi Road and Hibiscus Drive.

Two Honolulu police officers were fatally shot near a Diamond Head home in Honolulu, Hawaii, during an active shooter situation on Sunday morning 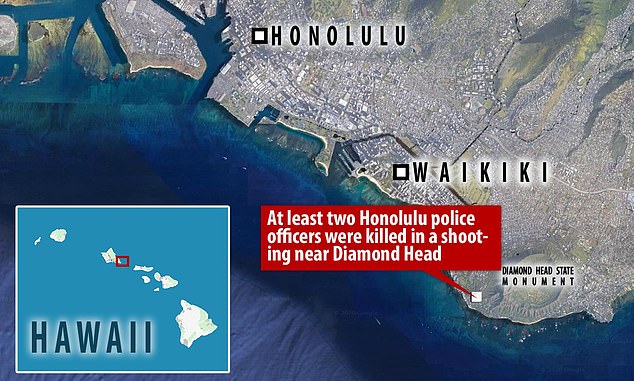 The unclear confrontation at a Diamond Head home near Poni Moi Road and Hibiscus Drive in Honolulu, Hawaii

A second officer was reported in critical condition from the shooting and also died from the sustained injury.

A witness at the scene said emergency crews were seen performing CPR on an officer immediately after the shooting.

Dozens of local police officers, including police chief Susan Ballard, were seen arriving to the local hospital in waves as the victims were transported away from the scene.

Authorities have since closed nearby roadways as an investigation is underway regarding the incident. 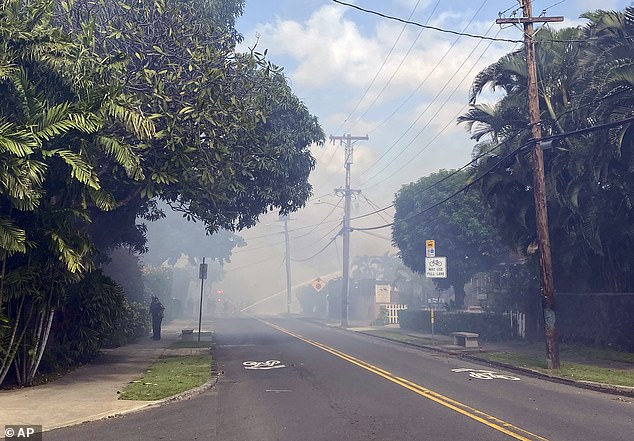 Pictured: Smoke billows through the streets after a shooting in Honolulu on Sunday morning

HPD: ‘In the area of Hibiscus Dr. and connecting streets are closed down due to police investigation’

During the incident, a home the suspect was believed to be inside caught fire and was quickly engulfed in a horrifying blaze.

Video taken from the scene of the fire appear to capture the sound of gunfire inside the home as it burned, but this has not been formally confirmed.

The flames have since spread to four neighboring homes and a parked Honolulu Police Department vehicle.

Firefighters are currently staging near the burning homes waiting for police officials, who have control over the scene, to give the all-clear to proceed.

No arrests have been made yet.

A youth tennis tournament near Kapiolani Park was cancelled because of the gunfire, but authorities do not believe the suspect was in the park.

Yellow caution tape was placed around the area as precaution to keep it clear. 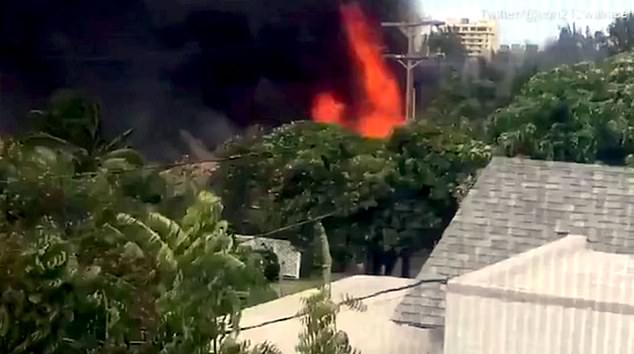 Pictured: Fire from the Diamond Head could be seen from other nearby residences