Former parish councillor and a retired teacher, both 62, are spoken to by police amid claims they blocked a woodland path with rocks and branches to stop cyclists

By Neil Sears for the Daily Mail

Police have spoken to two respectable retired women over claims they laid dangerous traps for cyclists in woodland.

Officers acted after mountain biker Nathan Cartwright, 17, found his path blocked with rocks and branches, then spotted two women who openly admitted they had put them there to stop cyclists.

The pair, former parish councillor Anna Hacket-Pain, and retired teacher Wendy McLachlan, both 62, suggested the youngster was breaking lockdown rules by travelling to the beauty spot, and trespassing on private land.

He argued that he only lived a mile away, that they had no more right to be there than him, and that as residents of different households they should not have been out together.

Nathan Wainwright, above, said he was shocked to find two respectable older women working so hard to stop him and his bike

He later posted a video of the incident on social media, and his father Adam, a construction engineer, spoke out in his defence.

Police have intervened and sent uniformed officers to speak to the two women.

The force warned it was dangerous to place obstacles which could injure cyclists or damage their bikes.

The incident, which took place on Sunday, comes amid rising tension over visits to beauty spots during the lockdown.

It is claimed Anna Hackett-Pain (above left) and Wendy McLachlan (above right) demanded to know where Nathan had come from, told him he was trespassing, and suggested he could end up in prison

Locals in the Lake District and Cornwall are among those who have tried to deter visitors.

Nathan, who lives with his father and NHS nurse mother Jennifer, both 38, in Leyburn, North Yorkshire, last night said he was shocked to find two respectable older women working so hard to stop him and his bike.

The incident happened in woods on the Bolton Estate in Preston-under-Scar near Leyburn. 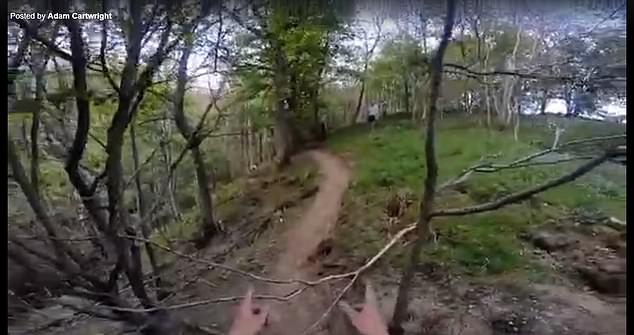 His head-mounted camera caught him cycling up to the branches blocking his path – after earlier coming across other similar barriers – and asking the nearby women if they put them there to stop him.

The women replied: ‘Yes we did.’ They demanded to know where he had come from, told him he was trespassing, and suggested he could end up in prison.

Nathan said: ‘I remained calm to try to sort the situation out. I was surprised to see who it was who was doing it – I assumed it would be someone younger, judging by the weight of some of the rocks and branches.’

He said he has had informal permission to cycle there. His father said the obstacles had been laid in hard-to-see places and claimed the women could have caused a serious accident.

Mrs Hacket-Pain confirmed she had spoken to police and said the matter ‘is being dealt with through the appropriate channels’.

Refusing to discuss the ‘traps’, she said: ‘Wendy and I met coincidentally in the woods that day – we were socially distancing.’

Asked about the incident, Mrs McLachlan said: ‘I don’t think that is something I want to comment on, thank you.’

North Yorkshire Police said they had been contacted ‘about obstructions put on a track popular with walkers and cyclists. It was believed these items could cause injury or damage to bikes’.