Liverpool fan Sean Cox, 53, is in a critical condition following the attack on Tuesday

Two Italian men will appear in court on Thursday charged in connection with an incident which left a 53-year-old Liverpool fan in a critical condition.

The two men will appear at South Sefton Magistrates’ Court on Thursday morning.

Liverpool supporter Sean Cox was attacked outside Anfield stadium prior to the Champions League semi-final match against Roma on Tuesday night.

Mr Cox, of Dunboyne, Meath, who was at the game with his brother, is in a critical condition at Walton Neurological Centre in Liverpool after being attacked by rival Roma football supporters carrying belts and hammers. 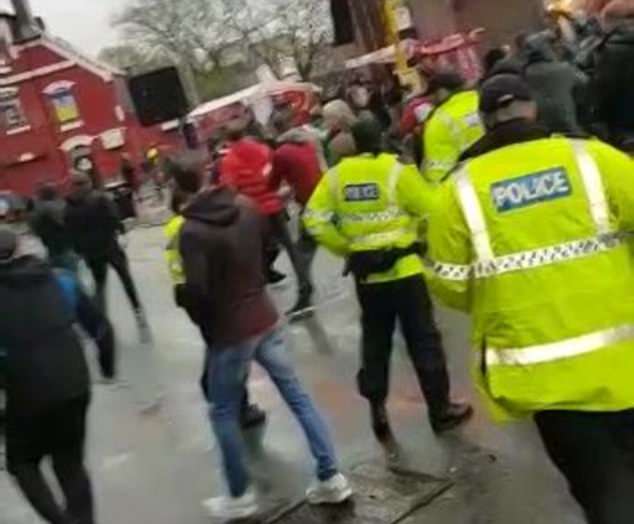 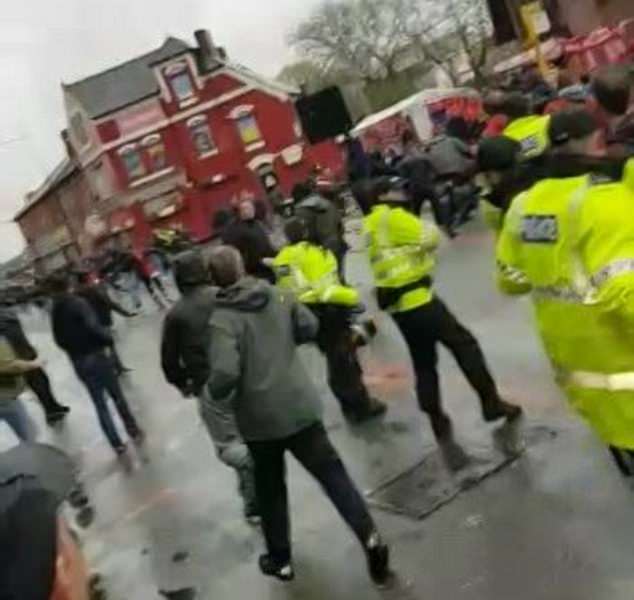 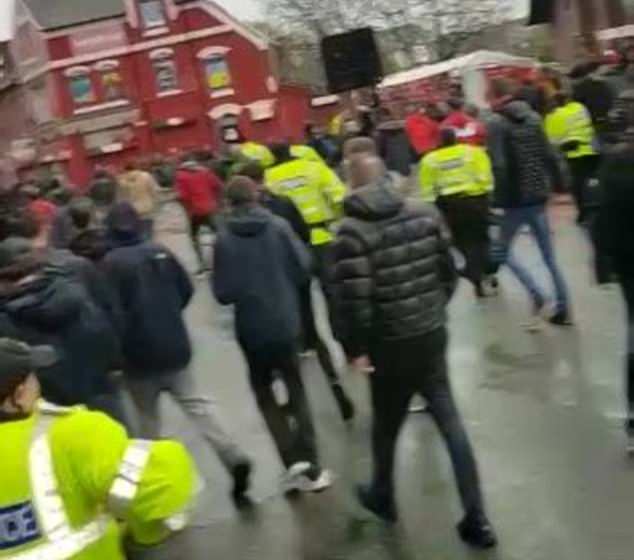 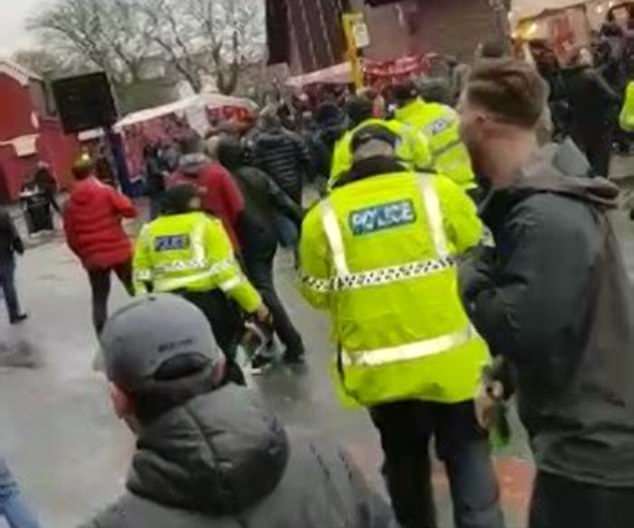 Some witnesses have claimed police were slow to react, with video footage showing many officers did not intervene as battles took place between fans.

Jonathan Northcroft, who is chief football correspondent for the Sunday Times, wrote: ‘The first few Italians had belts in their hands and moved in on one Liverpool fan who looked to be about 50, was fairly big but looked harmless. I didn’t see what blows were struck – I assume with the belts.

‘But they knocked the man down and, after scuffling with a couple of other Liverpool fans, the Italians ran off. There were a lot of police in the area but they moved in to help only after the Italians had gone.

‘The man looked to be unconscious and was lying in the middle of the street. Two officers attended initially, before back-up arrived about three or four minutes later.’

Chief Superintendent Dave Charnock, commenting on the police response, said: ‘As with any football match at this level a great deal of work between ourselves, the clubs, and other partner agencies goes into the planning to ensure that the event is adequately staffed and people are able to attend the match safely.

‘I am happy that last night’s home leg at Anfield had the sufficient number of resources.

‘As well as a considerable number of our officers who were in and around the ground we were also supported by officers from Lancashire and Greater Manchester Police and other specialist departments including the dogs and mounted section. In addition we had support from our Italian police colleagues.

‘A small number of arrests were made for a variety of offences but the vast majority of the 52,500 fans attending the game were well behaved both inside and outside the ground.

‘I would like to take this opportunity to thank the Liverpool Football Club stewards and the police officers who were out on the ground last night for their hard work and professionalism throughout the evening.’

The wife of father-of-two Mr Cox has travelled to Liverpool to be with him, while his grown-up children remain in Ireland awaiting further news.

Trouble erupted in the hour before kick-off at the Champions League semi-final when a group of Roma fans, not dressed in their club’s colours, stormed towards The Albert pub near Anfield.

Eyewitnesses reported that the Italians were swinging belts. Some of their fans were also seen to be carrying hammers. On Wednesday, Roma joined those condemning the ‘abhorrent behaviour’ by a group of their fans before the match.

Fianna Fail councillor Damien O’Reilly, who has known Mr Cox for 15 years, describe him as the ‘nicest man on the planet’.

Mr O’Reilly said: ‘He’s from my village and I’ve known him for years. He’s a massive football fan and was there for the match with his brother.

‘He’s just the nicest man on the planet. He’s a cornerstone of the community, everyone in the area is shocked at what’s happened. We’re all thinking of him and his family and praying he has a speedy recovery.’

Mr Cox, a sales director for Precision Cables, is well known in his local community and is treasurer at St Peter’s GAA in Dunboyne – having served as president of the sports club. 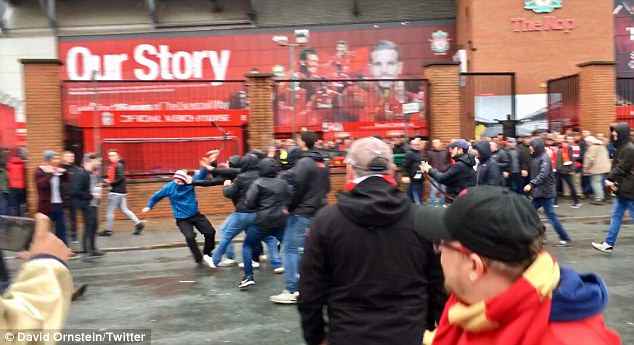 Councillor Maria Murphy, of Meath County Council, who has known him for 18 years, said the whole community is shocked and is keeping him in their prayers.

She said: ‘He’s a lovely man with a lovely family and it was a horrific attack on an innocent person attending a game and supporting the team he loves.

‘The community is absolutely shocked by it and he has their whole support for his recovery. We’re keeping him in our prayers.

‘We moved to Dunboyne around the same time. I’ve known him for 18 or 19 years. His children are of a similar age to mine.

‘He’s very involved in the community, particularly the GAA club. He often travels to go and watch Liverpool play, he’s a huge Liverpool fan. There’s a lot of fans over here. I believe he’s had surgery but that’s as much as I know.’

St Peter’s GAA Club in Dunboyne has also wished him a speedy recovery, saying that its ‘thoughts and prayers are with Sean and his family’.

A spokesman added: ‘We hope that Sean is receiving all of the medical care he requires and that he makes a full and speedy recovery.

Mr Cox is pictured with his wife Martina, who has travelled to Liverpool to be with him

A Roma spokesman said: ‘AS Roma condemns in the strongest possible terms the abhorrent behaviour of a small minority of travelling fans who brought shame on the club and the vast majority of Roma’s well-behaved supporters at Anfield after getting involved in clashes with Liverpool supporters before last night’s fixture.

‘There is no place for this type of vile behaviour in football and the club is now cooperating with Liverpool Football Club, Uefa and the authorities.The club’s thoughts and prayers are with the 53-year-old Liverpool fan in hospital and his family at this time.’

This followed an earlier statement by UEFA that said it was ‘deeply shocked by the vile attack’ and its thoughts were also with the victim and his family.

It added: ‘The perpetrators of this ignominious attack have no place in and around football and we trust they will be dealt with the utmost severity by the authorities.

‘UEFA is waiting to receive full reports before deciding on potential disciplinary charges.’

Liverpool, who won a thrilling contest 5-2, had already issued their statement, saying they are ‘shocked and appalled’ by the attack and they will be offering the victim and his family their ‘full support’.

It added: ‘Liverpool FC directs supporters and those in attendance at the game to Merseyside Police’s appeal for information.’

In a long statement on the force website, Merseyside Police said witnesses have reported that the victim was hit with a belt and then fell. The incident took place outside the Albert pub at about 7.35pm. 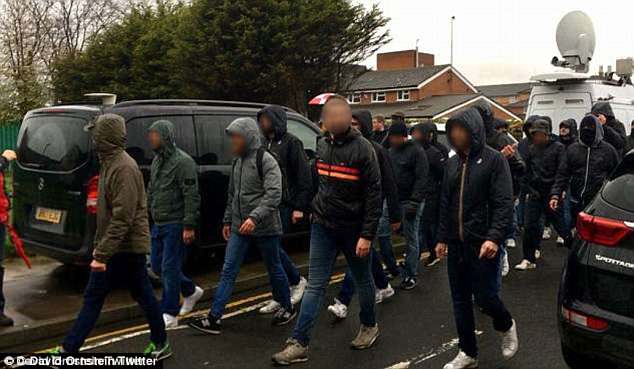 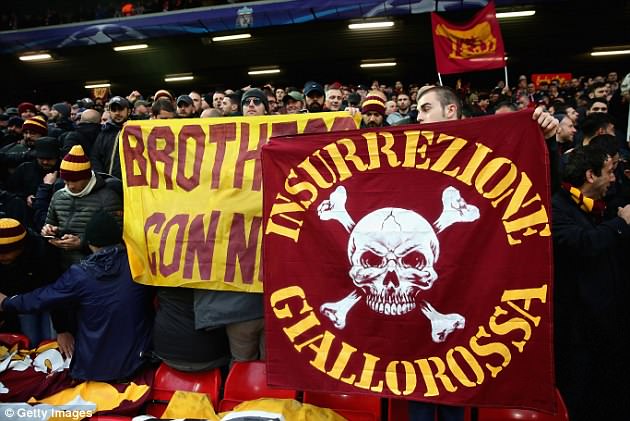 The fan’s alleged assailants were among a total of nine men, aged between 20 and 43, arrested for various offences before and after the match.

The offences include affray, assault, possession of offensive weapons, possession of a controlled drug and criminal damage. Detectives are also investigating the use of flares outside the ground, the force said.

Several journalists at the scene of the fighting have said a group of more than 20 Roma fans initiated the violence and were then chased off by home fans before the police could respond, despite there being a large security presence at the game.

Roma fans have a recent history of violence against English supporters, most recently when they attacked Spurs fans in a bar in Rome in 2012, and Liverpool’s own history with Italian clubs is stained by the Heysel Stadium disaster in 1985, which left 39 dead.

Tuesday’s incident has come as a huge shock, though, particularly after Roma’s players and officials had made a good impression by laying a wreath at Anfield’s Hillsborough memorial on Monday.

Merseyside Police chief superintendent Dave Charnock said: ‘The vast majority of the 52,500 fans attending the game were well behaved and went to watch a good game of football.

‘However, a minority of fans from both Liverpool and Roma were involved in isolated pockets of disorder in the city centre and near to the ground.’