Two vegans reveal why EVERYONE should adopt a plant-based lifestyle

Two vegans have revealed that switching to a plant-based diet helped them shed five kilos in weight – and improved their sex lives.

Viral vegan recipe creators Henry Firth, 34, and Ian Theasby, 33, who live and work together in east London, have sung the praises of cutting out animal products from their diets.

The school friends from Sheffield, who run the plant-based recipe Facebook channel Bosh! and have been vegan for more than three years, say that the lifestyle also helped them sleep better, and improved their skin and hair.

They revealed why everyone should try and eat more plant-based food to Femail Food&Drink after launching their first cookbook this month, named after their channel, which is watched by 26 million people every month.

Ian Theasby and Henry Firth live and work together on Bosh! a Facebook channel of vegan recipe videos that is watched by 26 million people every month 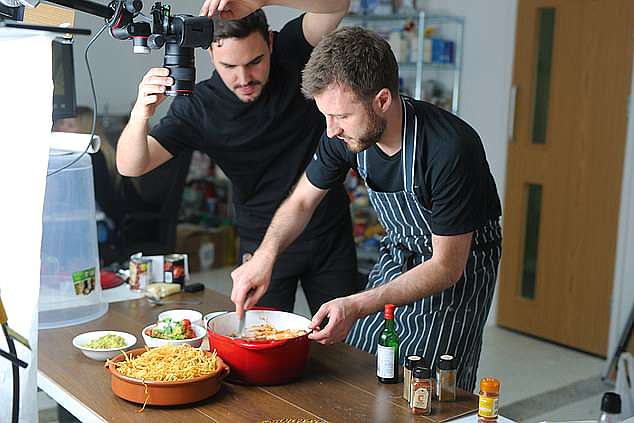 Henry films as Ian whips up another vegan dish for their Bosh! TV channel

Henry revealed that he lost five kilos in weight in just a couple of months after switching from eating meat to veganism, while Ian said the weight noticeably dropped from his face.

The potential positives from becoming a vegan

– Better performance in the bedroom

Ian, who became vegan in early 2015, said: ‘Almost immediately there were a lot of physical benefits came.

‘I was sleeping sounder and easier, my hair was getting thicker, my skin was getting clearer and I was getting a lot more energy throughout the day.

‘A lot of weight fell off me as well. I got back to the body I like to be in because I was carrying a little too much weight at the end of 2014.’

Henry agreed and said: ‘You just feel quite light and full of energy. If you were to gorge on chips and pasta that wouldn’t be the case and you could obviously be unhealthy and do it wrong, but if you do it right, there’s a general great feeling in your digestive system.

‘From my personal experience, I found hangovers got less bad.’

He added: ‘We’re not only people who have said it but it does help your sex life. It is a plus point.’ 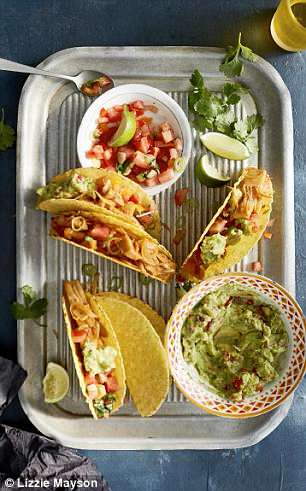 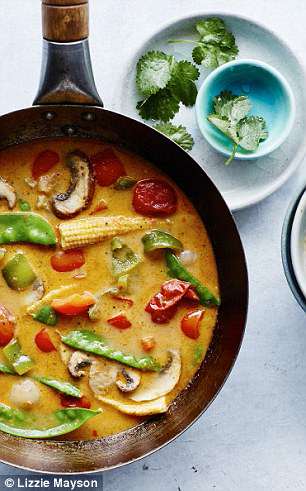 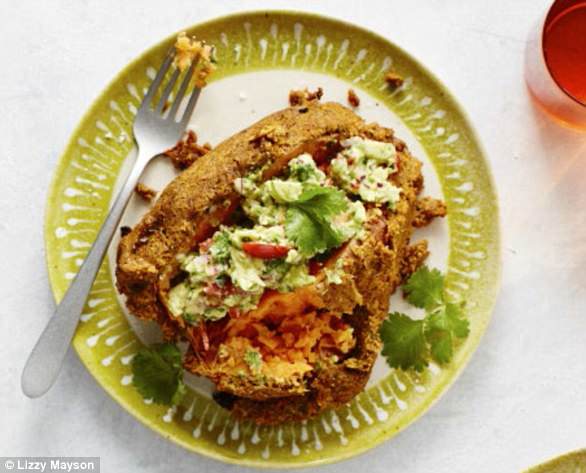 2 large sweet potatoes (about 300g each)

1 x portion Guacamole (shop-bought or make own), to serve, optional

For the curry paste:

8 sun-dried tomatoes, plus 1 tbsp oil from the jar

1. Prick the whole sweet potatoes with a fork and put them on a plate

2. Microwave on high for about 10–15 minutes until quite soft (alternatively put the potatoes in a 220°C oven and bake for 25 minutes, remove them from the oven and reduce the heat to 200°C)

3. Remove and set aside to cool down slightly. Score the skins with a sharp knife

4. Peel the ginger by scraping off the skin with a spoon. Peel the garlic. Rip the stem from the chilli, cut it in half lengthways and remove the seeds if you prefer a milder flavour

5. Cut the lime in half and squeeze the juice into the food processor, catching any pips in your other hand

6. Put all the rest of the curry paste ingredients into the food processor and whizz to a thick paste

7. Cut 2 squares of foil big enough to fully wrap your sweet potatoes in and grease one side with oil

8. Take half the curry paste and use your hands to encase one of the potatoes with a thick layer of paste. Repeat with the second potato

9. Tightly wrap the sweet potatoes in the foil squares, put on the baking tray and bake in the preheated oven for 30 minutes.

10. Take the sweet potatoes out of the oven, remove the foil and serve with a small side salad and a big spoonful of guacamole, if using

Henry and Ian, who is from a family of farmers, both ate meat, until 2015.

Ian was the first to switch to a plant-based diet after he found giving up alcohol for January too easy.

He cut out meat too and decided by the end of February to try veganism. He has never eaten meat since.

Henry, who still lived and worked with Ian at the time, was sceptical but decided to join him when the pair watched the popular environmental documentary Cowspiacy, about the impact of agriculture on the environment together.

Henry said: ‘That flicked a few switches in my brain and I just decided for the planet it’s going to be important to make this move. I went vegan overnight and felt fantastic.’ 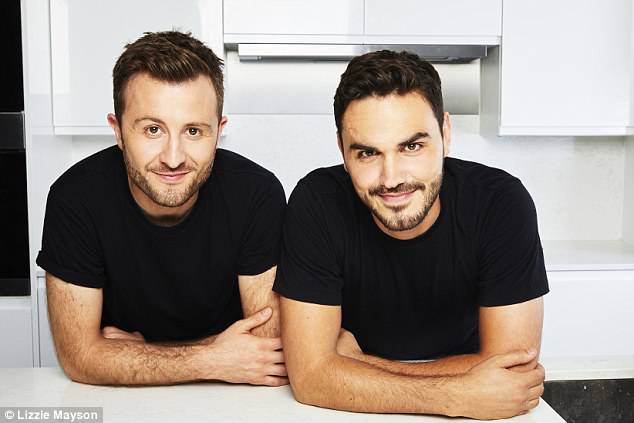 Ian and Henry have now been vegans for three years 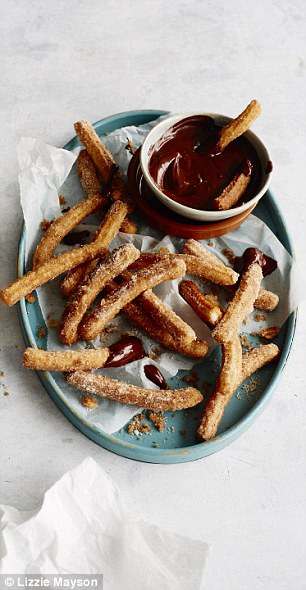 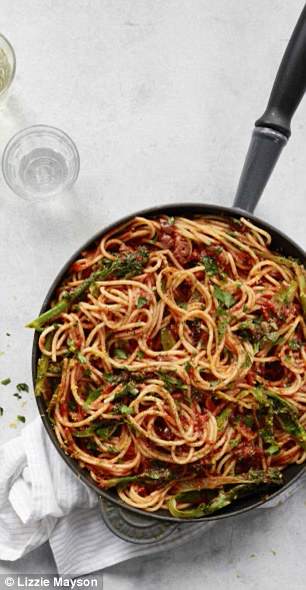 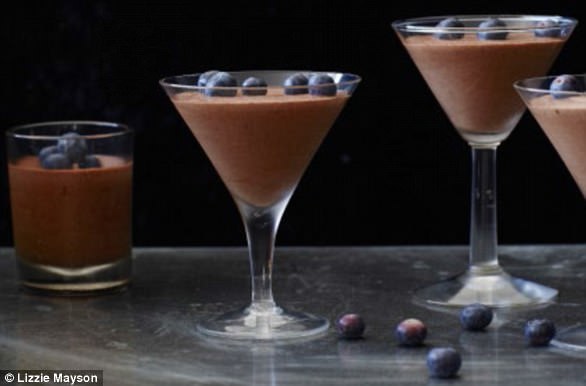 1. Pour hot water into the pan until it’s about 3cm deep and bring to the boil. Reduce the heat to a simmer. Put a heatproof bowl on top of the pan, ensuring the water doesn’t touch the bottom.

2. Break 85g of the dark chocolate into the bowl and leave it to melt | Remove and leave to cool a little.

3. Pour the aquafaba into a large bowl and use the electric beater (a hand whisk won’t cut it this time) to whisk the liquid for 10–15 minutes – it will gradually firm up, as if by magic. Stop when the mixture makes stiff peaks if you lift out the beaters.

6. Gently fold in the melted chocolate, sugar, vanilla and salt using a large metal spoon or spatula, making sure you don’t beat out too much air.

7. Spoon the mousse into serving glasses or bowls and chill for 2 hours

8. Grate the remaining 15g chocolate. Dress the individual mousses with a

Ian’s family, as farmers, were quite shocked when he told them he had cut meat from his diet.

But now he says his mother has come around to the idea and, while not converted, is eating ‘more plant-based food than ever’.

The men, who have a Youtube channel with 24,000 subscribers as well as their Facebook page, say that their mission isn’t to convert anyone but to encourage everyone to eat and enjoy more plant-based food.

Henry said: ‘We’re happy with whatever anyone wants to do. Everyone is on their own journey, we’re on our own journey, and if people want to use a cookbook as a vegetarian or flexitarian, that’s their call.