Two women reveal their flings with David Bowie aged under 15

Already a musical legend, David Bowie has attained a virtual god-like status since his death in January 2016. The subject of books, documentaries and endless tributes, he is almost bigger in death than he was in life.

As GQ Editor Dylan Jones, the author of one of these books, says, Bowie is a ‘continually expanding balloon that refuses to burst’.

All of which makes the recollection of Bowie as a middle-aged seducer of teenage groupies, shared via a podcast by comedian David Baddiel, feel wildly jarring.

Baddiel said last weekend that he was told the story by one of his female friends about a ‘romance’ with Bowie while the singer and Mick Jagger were holidaying in Mustique. He said: ‘This woman was 16 at the time and Bowie would have been in his 40s.

She and her best friend had one of many drinking nights with Bowie and ended up back at their shack with David.

‘It worked for David as both the girls got naked. There were sexual goings-on but she didn’t sleep with David. I said: “Why on earth would you not want to lose your virginity to David Bowie?” She replied: “It wouldn’t mean anything to him. I didn’t want to do that for him, just one night.” 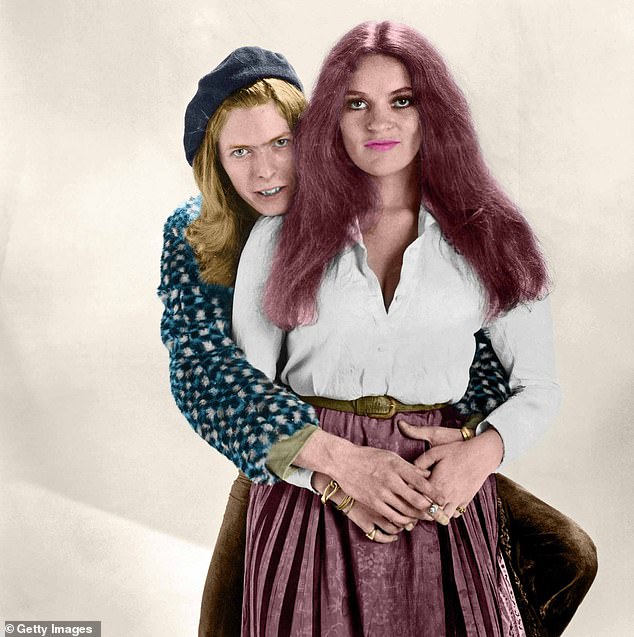 ‘Instead she went outside. David did s*** the friend, then came out and tried to make it all right with her because she was a bit p***** off.’

Bowie fans already knew about the wild times in the early Seventies — to be clear, it’s not illegal to sleep with a 16-year-old — but was he really in the habit of seducing teenagers when he was middle aged?

It appears so. Put simply, Bowie was described by his friends as a ‘sex addict’ with a catalogue of lovers old and young, male and female, and a tremendous appetite for all.

This week, the Mail has spoken to two women who were under the age of consent when they slept with Bowie. Lori Mattix, who had a liaison with him aged 15, explained: ‘I never thought of David Bowie as a paedophile. He would f**k anything. If he liked it he would f**k it.’ 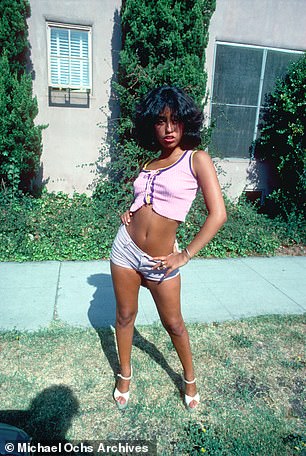 Lori Mattix, who had a liaison with him aged 15

Early girlfriend Dana Gillespie concurred, telling me: ‘As far as sex went, if it moved, he was there. Man, woman, old or young. Times have changed and it doesn’t always look so good in black and white now, but in those days we were just having fun; there were no rules.’

It’s a matter of record that he dallied with famous women including Charlie Chaplin’s widow Oona, 22 years older, and actress Bette Midler, plus Bianca Jagger, Susan Sarandon and Lulu.

There were always rumours of some kind of liaison with his friend and friendly rival Mick Jagger, and he also had affairs with male mime artist Lindsay Kemp and Natasha Korniloff, Kemp’s costume designer — at the same time. Finding out he was two-timing them, both attempted suicide.

Sometimes, having sex was a way of gain an advantage. Former wife Angie said: ‘Using sex was what David did. He used sex to endear himself to people, so they loved him and did things for him and worked hard to promote him. It was the pure selfishness of wanting to succeed.’

But at other times, his promiscuity seemed more simply a habit which he enjoyed too much to consider amending.

As he said in a 1997 radio interview: ‘I was hitting on everybody. I had a wonderfully irresponsible promiscuous time.’

The sexual free-for-all characterised his open marriage to Angie, whom he wed in 1970. She wrote in her autobiography: ‘David made a virtual religion of slipping the lance of love into almost everyone around him.’ Some lovers they shared, others they did not. By his 1972 tour of America he was with Cyrinda Foxe, a 19-year-old model. She recalled that he sent for her while he was having sex with a groupie because he needed someone to talk to. Former assistant Tony Zanetta said David had sex with Puerto Rican transsexuals while in New York. 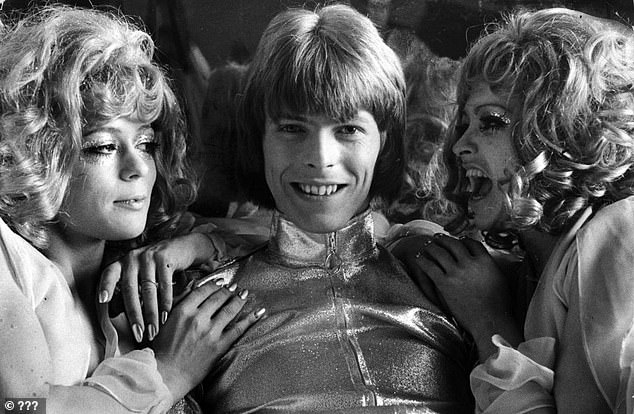 Dana Gillespie was a friend of both David and Angie at this time.

She had met David after watching him perform at the Marquee in Soho in 1964.

He came onstage in thigh-length, fringed suede boots, with long hair. After the set he came up behind her and brushed her hair, and then asked if he could come home with her (she later worked out that this was because he was going to miss the last train back to Bromley.)

Dana told me: ‘I have never thought of David as someone who liked young girls in particular. He liked bright women.

‘It has been suggested to me that him sleeping with me when I was 14 was “statutory rape” but I have said to writers, look, you can’t put that in because, yes, I was young but we were just having fun.

‘He would play my guitar and listen to my songs, and play me his. I remember he once phoned me up to tell me that he had just written Space Oddity. He wrote the song Andy Warhol for me.

‘We were friends for the first ten years of his career, I didn’t see him really after 1975. I wouldn’t call myself a girlfriend, we did all of that and got it out of our system.

‘It was not the kind of relationship where I would ever have wanted to be Mrs Bowie.

‘When I was 15 or 16 I would hear from him every three or four months. He would come round and I would cook him brown rice and vegetables because he wasn’t eating properly. I remember once he came round and said that his heart was a bit broken because he had trouble with Hermione (Farthingale, his ballet dancer girlfriend.)

‘He did not talk about the emotional stuff, I guess you could say that he was a rather cold character because everything came second to ambition.’

As David became more famous, he caught the attention of the notorious ‘baby groupies’ who were on the scene in Los Angeles at the time.

Led by Californian wild child Sable Starr, who had a romance with Iggy Pop when she was 13, the girls competed to bed visiting British stars.

One of their number was Lori Maddox, also known as Lori Mattix. She was 14 when she first met Bowie at the E Club on Sunset Strip and was working as a model. He was on his Spiders From Mars tour of 1972.

She turned him down that night, but five months later Bowie returned to LA and she was called by his bodyguard, Stuey.

Now she reflects on the episode with satisfaction. She said this week: ‘I don’t even think he thought about my age, he was so anti-social and breaking boundaries everywhere.

‘I don’t think it was a thought for him and I don’t think he was hanging out with a lot of underage people. We were young then and he was 25, that is still young as well.

‘The rockers must have known we were underage girls, maybe that was part of it for them, the innocence, I don’t know. 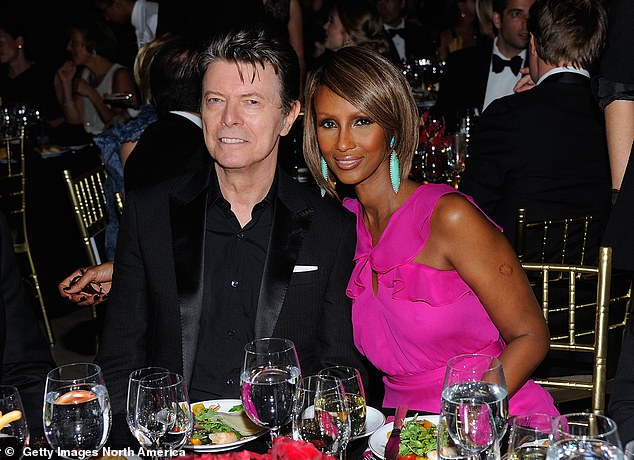 ‘David was so gentle and kind with me when we were together. It could have been some creepy guy who threw me on the bed and like raped me. It was a different thing, he took me by the hand and was a gentleman. He was a fascinating creature. Was I supposed to do it with some Algebra teacher in the back of his van? I was the last of the virgins at my school, too.

‘Do I regret it? No, life goes on. I am 60 years old and it was 45 years ago. People should get over it. You go through a journey in life, I don’t believe in mistakes, I believe there is a destiny for everybody.

‘David was not a star yet so he did not take advantage of any celebrity with me. I remained friends with him throughout his rise to fame and he would always check in with me to see how I was doing in my life. We were friends.

‘I was a teen model. David was very androgynous and he liked to be around cool and interesting looking people. It was all pure fun. It was a different time in rock ’n’ roll. We did not have internet or cell phones or anything like that.

‘He was attracted to that glam rock scene out here where we were all cheating and being unacceptable. It was all good, pure fun. I do not feel like I was taken advantage of, not at all. We were all just hanging out.’ She added: ‘He was fascinating for anybody. David was an anomaly, he was just not normal. He had carrot red hair, no eyebrows, he was magnificently beautiful, the skin, the cheekbones, those two different coloured eyes. 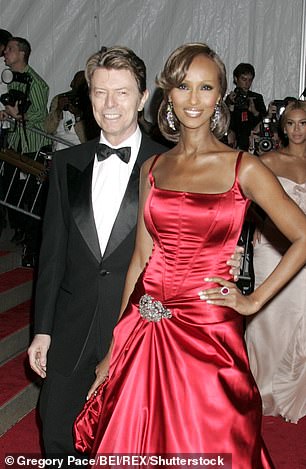 The couple stayed together until his death in 2016

‘He was a magical and wonderful celluloid figure plus he was brilliant, bright, funny and witty.

‘Everybody has a different journey and you cannot judge that journey.

‘He was an explorative soul and he was always open about that.’

Examining the ages of some of his lovers, it is clear that he did like his women quite young — even when he was middle aged.

Groupie Josette Caruso recalls that she was 19 years old when they slept together in Philadelphia in 1972, and David was 25.

Ava Cherry, a long-term love, was also 19 when they met in 1972. Geeling Ng, the star of the China Girl video, became his lover after the shoot in Australia in 1983.

All of the womanising seemed to end when he fell for the model Iman, whom he met on a blind date in 1990 and married in Tuscany in 1992.

Yet, the facts remain, and the issue of Bowie and the teenagers does cause some embarrassment, to this day. Several people who were friends throughout his career declined to speak this week. Perhaps it’s just one taboo too far.

One senior music industry figure says: ‘The fact is that in those days there was a teenage groupie scene and there are a lot of established stars who feel nervous about what went on.

‘I remember there was a kind of a trend for sleeping with mothers and daughters in the Seventies.

‘Don’t forget about Mandy Smith who was 13 when she met Bill Wyman [43 at the time]. Age was not perceived as that big of a deal and certainly nobody was thinking it was criminal, although obviously it was in some cases. Also you have to look at the culture — it was all about celebrating teenagers and youth. But no, nobody wants to talk about this any more.’

Tony Zanetta, Bowie’s manager and also his lover, said that in the end the identity of his lovers didn’t really matter to Bowie. Zanetta said: ‘He was bisexual, but what he really was, was a narcissist.’

Dana Gillespie concurs. ‘Most of the sexcapades didn’t mean that much to him,’ she says. ‘It was always second fiddle to what he was really searching for, which was to be a star. You know, he was his own girlfriend and boyfriend.’