Two-year-old walks after paralysis from cancer

A two-year-old with stage 4 cancer has stunned doctors by learning to walk less than two years after a previous surgery left her paralyzed from the chest down.

Zéa Lane was diagnosed with neuroblastoma at three months old after her parents took her to a Miami hospital for a 106 degree fever.

The doctors decided to do an MRI scan on Zéa, which revealed cancerous tumors everywhere including a large tumor pressing against her spinal cord.

After debating treatment options, her parents agreed to let the surgeons remove the spinal tumor, which paralyzed Zéa from the chest down.

But two years later, Zéa has defied odds by successfully battling all of the tumors in her body except for a small sliver that remains between her lungs and spine.

She has also learned to walk with assisted devices despite her doctors originally saying she would never have that ability.

Zéa Lane was diagnosed with stage 4 neuroblastoma when she was three months old. A surgery left her paralyzed from her chest down, but she has since regained function in her legs. Pictured is her in May walking with her assisted device 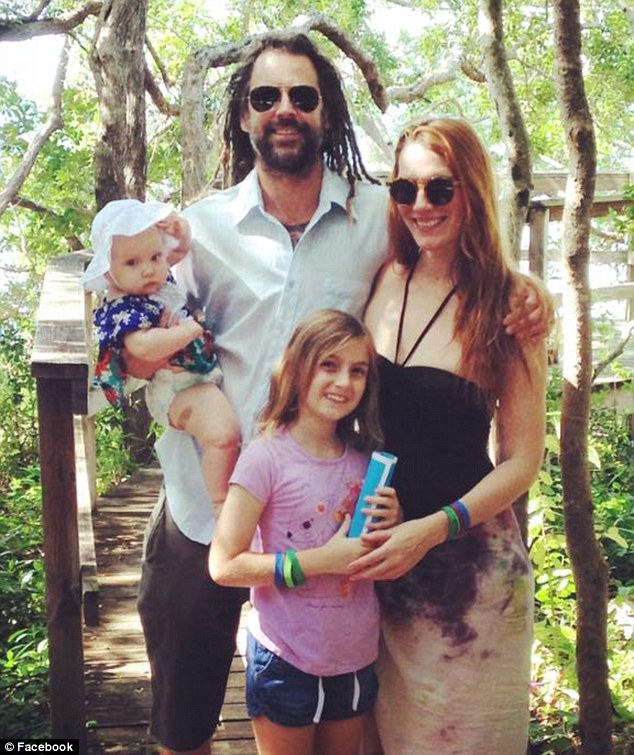 Her mother Heather (pictured right) quit her job to take care of Zéa while her father (left) is at work. Here the family is in November 2015 after Zéa’s cancer diagnosis

Zéa’s parents had fifteen minutes to decide if the doctors should operate on her tumors or start chemotherapy treatment.

‘She was covered with cancer,’ said her mother, Heather Lane, to CNN. ‘She had a primary area on her spine, and from there, she had disease that had spread to her liver, lungs, kidneys, bone marrow, even in her skull. We nearly lost her at that point.’

Neuroblastoma is a cancer of specialized nerve cells in the nervous system and other tissues.

More than 700 children in the US are diagnosed each year with the disease and most are diagnosed when they are younger than five.

It is the second most common solid tumor in childhood, and it makes up eight percent of the total number of children’s cancers.

Neuroblastoma commonly occurs in either one of the two adrenal glands in a child’s tummy or in nerve tissue that runs alongside the spinal cord, in the neck, chest, abdomen or pelvis.

The cancer can spread to tissues beyond the original site, including bone marrow, bone, lymph nodes, liver and skin.

As with most cancers the cause of neuroblastoma is unknown. The symptoms vary depending on where a child’s tumor is.

Treatment depends on the age of the child, as well as the size and position of the tumor and whether the disease has spread.

Every year, more than 700 children in the United States are diagnosed with this rare disease and it makes up six percent of childhood cancers, according to Cancer.Net.

This cancer is only found in children and develops in their nerve cells while they are a fetus in the womb.

Zéa went into chemotherapy treatment two days after her surgery to battle all the other tumors in her body.

She went through eight rounds of the treatment, but a tiny fraction of a tumor remains between her lungs and her spine.

Since the tumor is wrapped in nerves, it could cause damage to her mobility in her right arm if surgeons attempted to remove it.

The doctors in Miami wanted to start more rounds of chemotherapy, but her parents were worried about what it would do to Zéa.

Heather told CNN that they decided to seek another opinion at Memorial Sloan Kettering Cancer Center in New York instead of going through more rounds of chemotherapy in Miami.

Their doctor at the cancer center said it was best to monitor the tumor instead of doing any treatments.

Zéa goes to the cancer center every three months to make sure the tumor hasn’t grown.

It has reportedly shrunk and doctors said Zéa is considered stable.

When Zéa was going through her chemotherapy treatments, it seemed like the paralysis in her spine from the surgery was irreversible.

But after she stopped the treatments, her parents witnessed her wiggle her toes which gave them hope that she would one day walk.

Doctors said that since Zéa was so young, she was more likely to gain her ability to walk again than someone who is older.

She started physical therapy at the Kennedy Krieger Institute in Baltimore, Maryland, by first utilizing their pools with underwater treadmills. 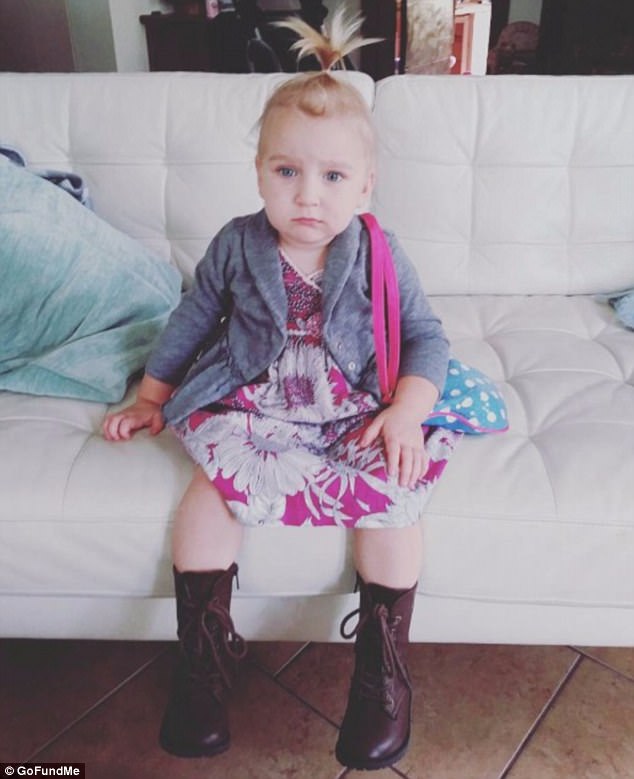 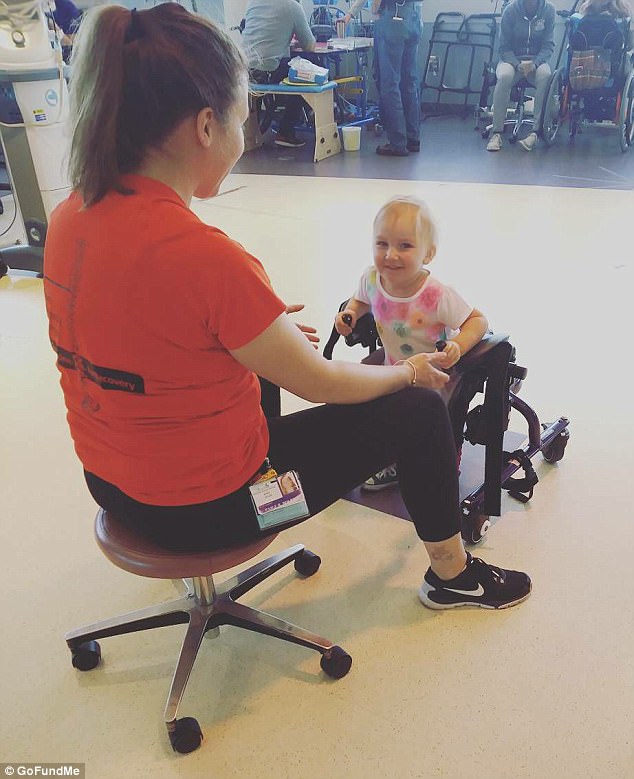 Her physical therapists believe she will be able to walk on her own eventually and even be able to swim. This is her in May during one of her appointments

This has allowed for her to build her muscles in her arms and legs without the pressure of gravity pulling her down.

The toddler goes to the institute for two-week periods every month and has three-hour sessions with her physical therapists each day.

Against all odds, she has started walking on her own in the pool and has also achieved milestones outside of the water.

Her therapists believe Zéa will one day walk and even swim on her own without assisted devices if she keeps up with the therapy.

Travelling to and from Miami, New York and Baltimore for Zéa’s treatments has been difficult financially on the family.

Heather had to quit her job in order to provide full-time care Zéa, so she created a GoFundMe page to help raise funds for all the treatments.

‘As far as her walking independently, I am hopeful she will get there,’ Lane said to CNN. ‘She just keeps beating the odds.’ 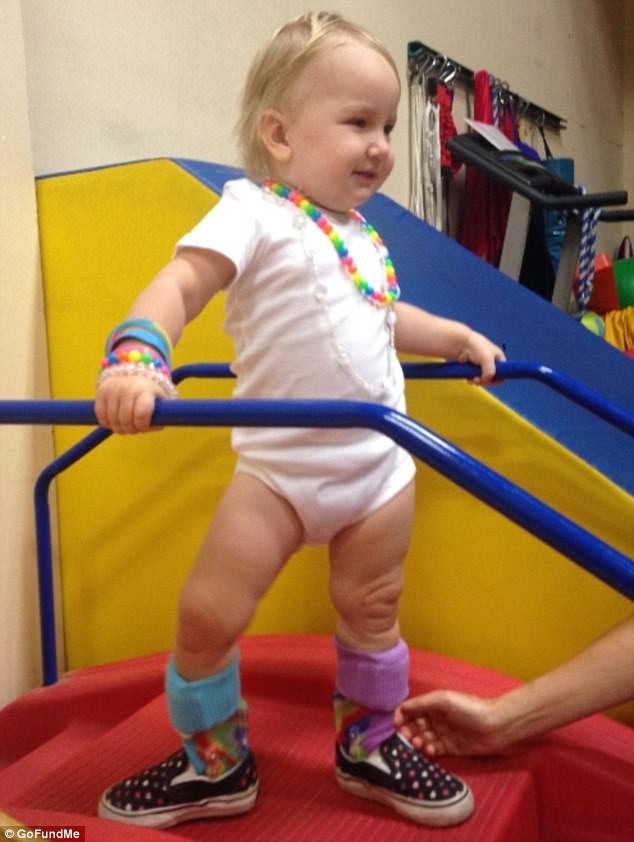 Strike a pose: Zéa does two weeks of therapy every month to help strengthen the muscles in her legs and arms. She now can walk on her own in the pool 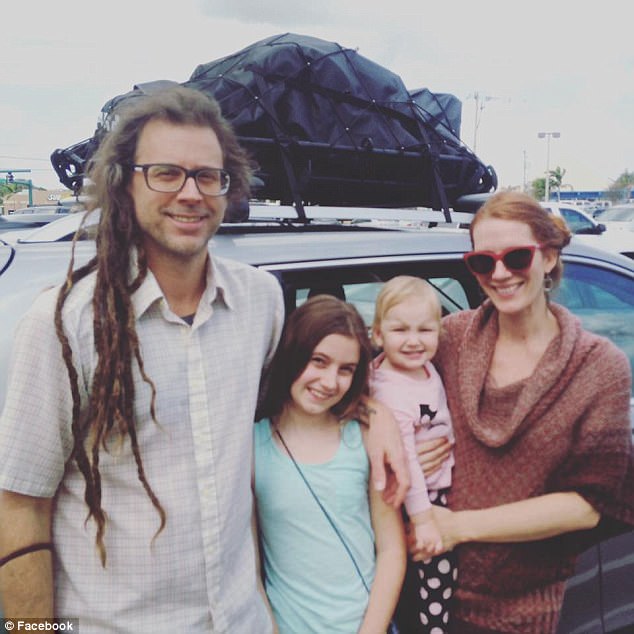 Zéa’s cancer diagnosis has been a financial burden on the family from Miami. They started a GoFundMe page to help pay for her different treatments. Pictured is them in January 2017