A woman who blocked a California freeway on Wednesday told police she was the daughter of a Texas serial killer.

The unidentified driver had a handwritten sign on the back of her car which read: ‘TX 45 killer is my dad’.

Since the 1970s, more than 30 young women have mysteriously disappeared or been found murdered along Texas’ Interstate 45, in what has become the state’s most notorious killing spree.

A mile from I-45, lies the 25-acre patch known as ‘The Killing Fields’, where the bodies of several young women have been found.  It is thought the murders may have been carried out by multiple serial killers.

The unidentified driver had a sign on the back of her car making the claims. She blocked the southbound 55 in Costa Mesa for an hour Wednesday 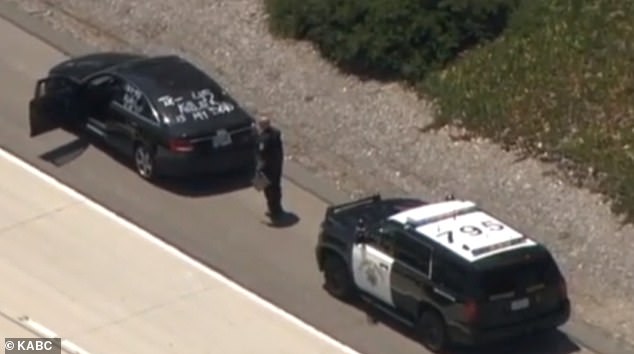 Since the 1970s, more than 30 women have disappeared or been found murdered along Texas’ Interstate 45, in the state’s most notorious killing spree

Detectives have described the remote area as a perfect dumping ground for a serial killer, which has made investigating the cases so difficult.

The California Highway Patrol in Orange County were called on Wednesday morning after the woman, who had a flare gun, stopped on the southbound 55 in Costa Mesa, ABC7 reports.

Her actions closed the freeway for more than hour. The woman was taken into custody and police were reported to be investigating her claims.

CHP Officer Florentino Olivera told The LA Times: ‘She was telling the [CHP] she wanted her story to be told that her father was the Texas serial killer.’

In April last year the bodies of two young women who were found dead in the ‘Texas Killing Field’ were identified after 30 years following a breakthrough in forensic DNA analysis.

The identification of their bodies comes decades after their grisly remains were discovered in the oil field along Calder Road in League City just outside Houston.

Their bodies were uncovered in the same location where two other previously identified women were murdered and dumped.

Thirty bodies have been found in the Killing Fields since the 1970s.