Typhoon Tapah overturned boats at harbours in South Korea this afternoon and could cause disruption to England’s Rugby World Cup opener today against Tonga on the Japanese island of Hokkaido.

Tapah was passing near Nagasaki in southern Japan on Sunday afternoon after hitting other parts of southern Japan, including Okinawa, the two previous days.

World Rugby said: ‘The typhoon could bring high winds and heavy rain. No match disruption is anticipated at this stage.’

The statement added: ‘But we have advised teams of potential disruption to training and team movements as a precautionary measure.’

Japan’s Meteorological Agency said the storm was moving northeast at a speed of 19 mph, with maximum winds of 100 mph.

A yacht is pushed to shore by strong tides in Ulsan, South Korea, 22 September 2019, as Typhoon Tapah approaches the country. Tapah was passing near Nagasaki in southern Japan on Sunday afternoon after hitting other parts of southern Japan, including Okinawa, the two previous days. 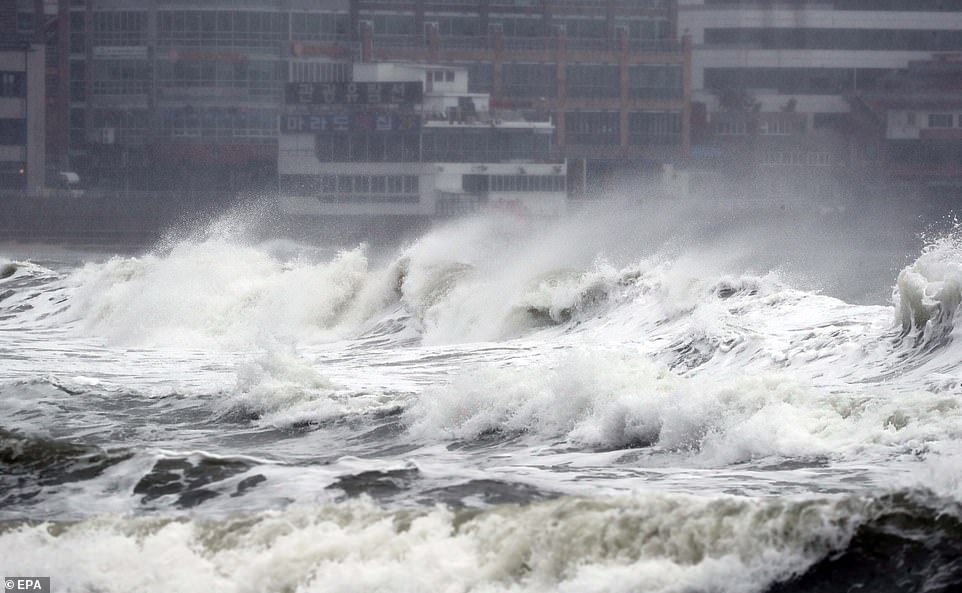 Haeundae Beach is hit by wild waves and strong winds, in Busan, South Korea on Sunday as Typhoon Tapah approaches the country’s southern region. England’s Rugby World Cup opener today against Tonga on the Japanese island of Hokkaido could be disrupted

Motorists drive through a flooded road on the southern resort island of Jeju, South Korea on Sunday 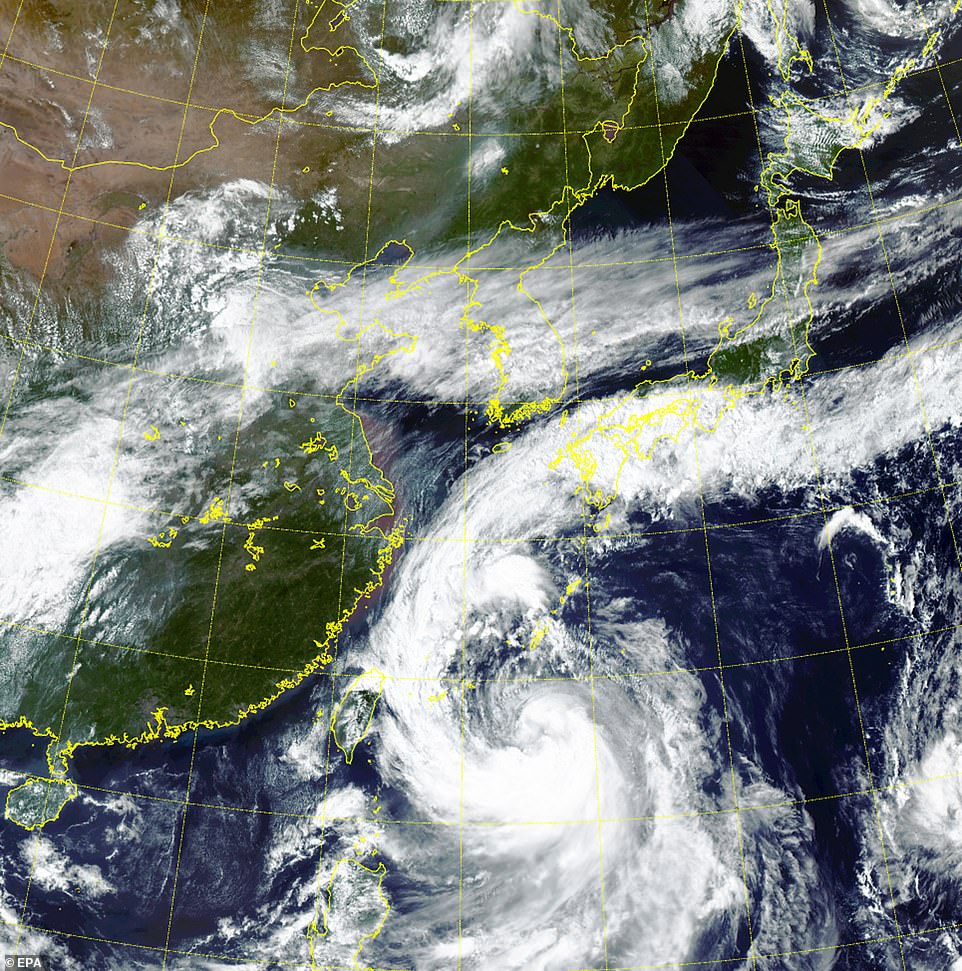 A satellite image from Korea Meteorological Administration shows Typhoon Tapah, the season’s 17th typhoon, as it moved towards Japan and South Korea on Friday

The agency warned of heavy rain, flooding and possible landslides through Monday in western Japan.

The storm prompted cancellations of more than 400 domestic flights, according to Japan’s national broadcaster NHK.

So far the typhoon has caused 21 minor injuries, mostly in a southern island region of Okinawa that was hit by the storm on Friday and Saturday.

Evacuation advisories have been issued to more than 2,000 regional residents, according to the disaster management agency. 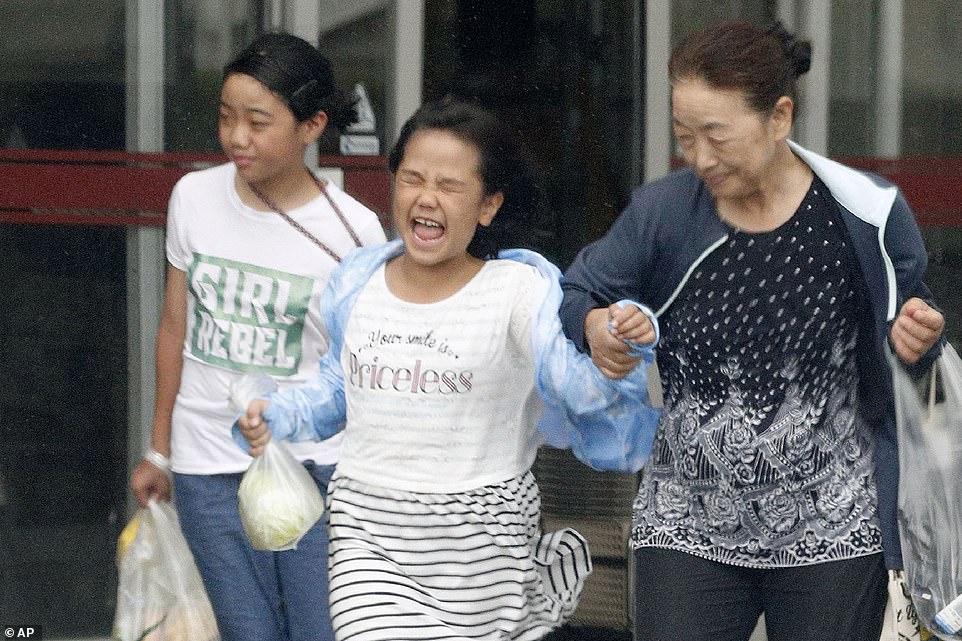 A girl grimaces against the force of powerful winds as Typhoon Tapah lashes Nakatane, Kogoshima prefecture, southwestern Japan on Sunday 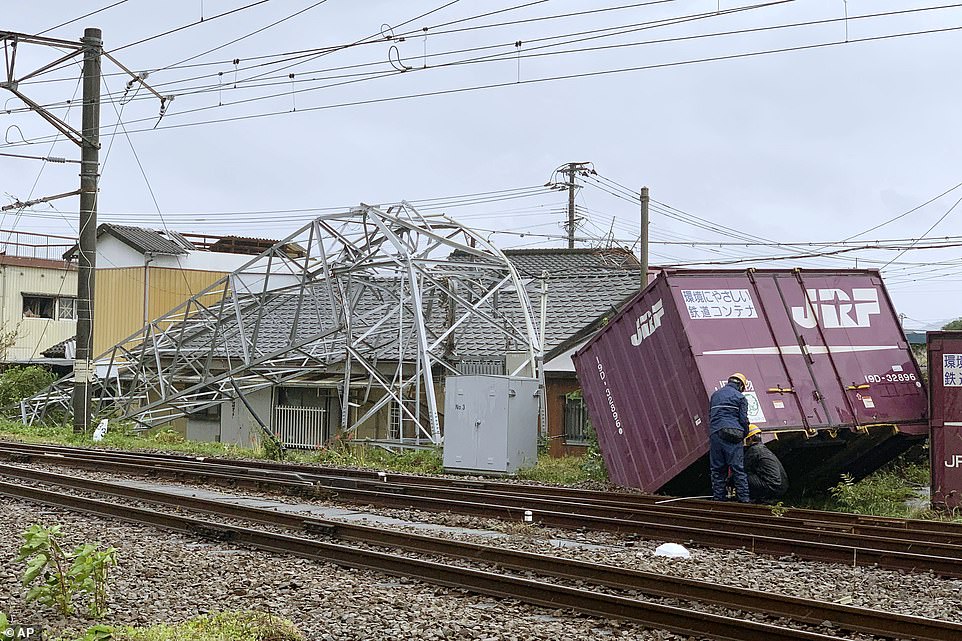 A cargo container and a steel tower are damaged by winds after Typhoon Tapah hit Nobeoka, Miyazaki prefecture, southwestern Japan on Sunda. The storm prompted cancellations of more than 400 domestic flights, according to Japan’s national broadcaster NHK. 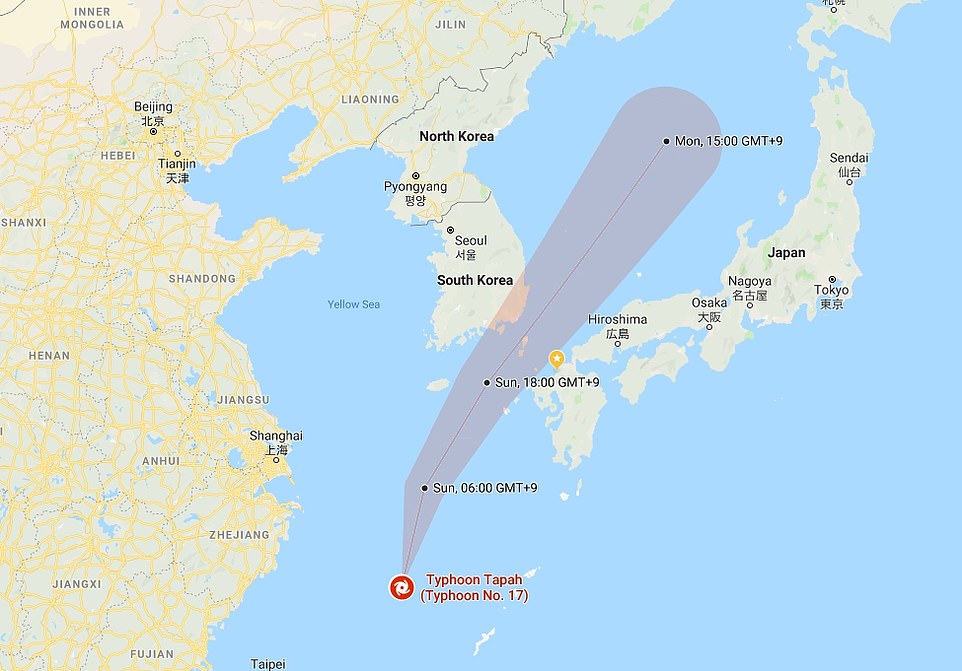 Map showing the path of Typhoon Tapah and the times it is set to have an impact. England’s World Cup opener today against Tonga could be disrupted as the storm moves north towards the island of Hokkaido. 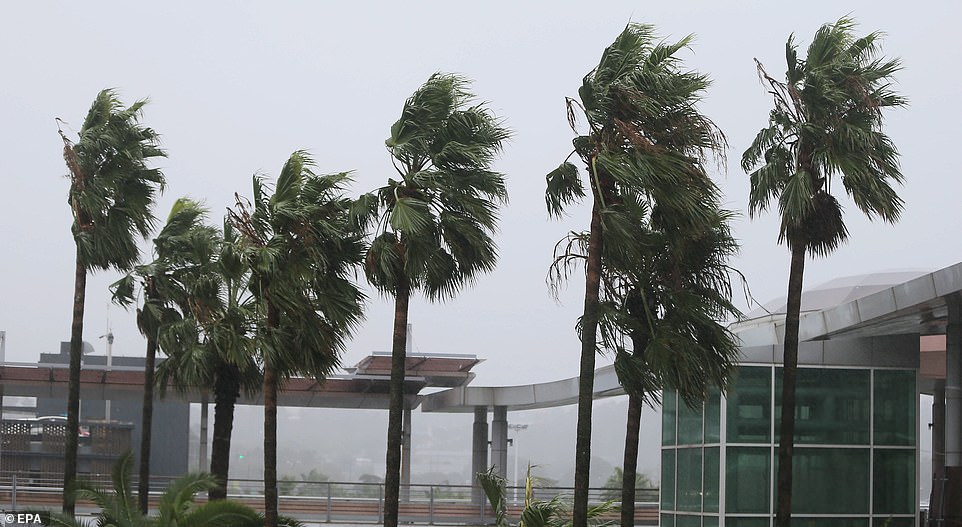 In Nobeoka City in Miyazaki prefecture, a tornado believed to have been triggered by the typhoon damaged at least one house and injured two people slightly, according to the Fire and Disaster Management Agency.

The winds blew a cargo container into an electricity tower, causing power loss to some train stations in the area.

The city postponed Sunday’s entrance exam for city employees due to the typhoon.

The approaching typhoon also caused fears in parts of Chiba, near Tokyo, which was hit hard by another typhoon earlier this month and is still recovering from damage.

That typhoon damaged many houses and electric poles, causing widespread blackouts in the prefecture and triggering criticism and concern about aging infrastructure systems in the country. 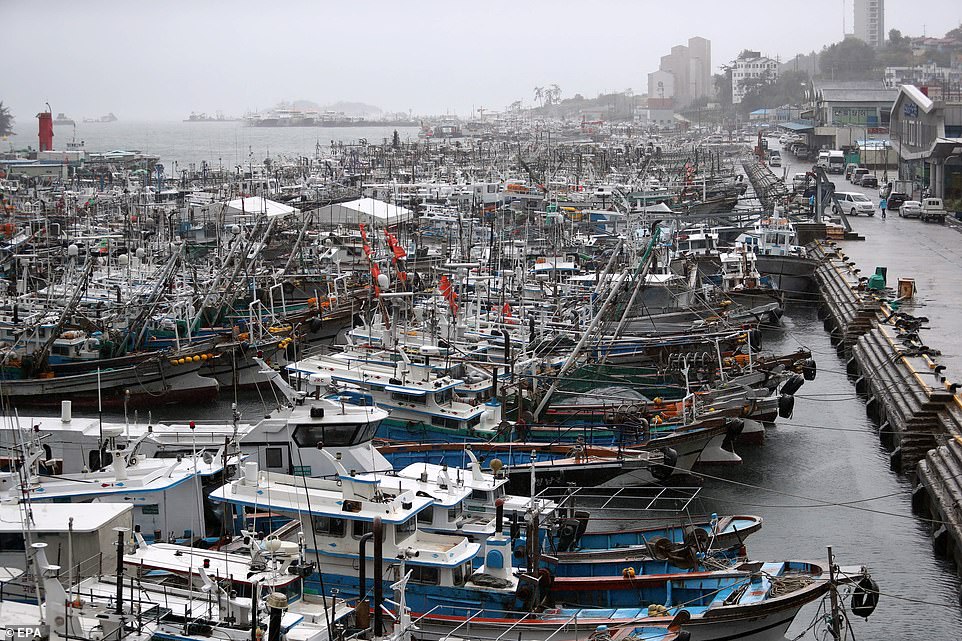 Fishing boats are docked at a port in Yeosu, South Korea as the storm approaches the southern coast today 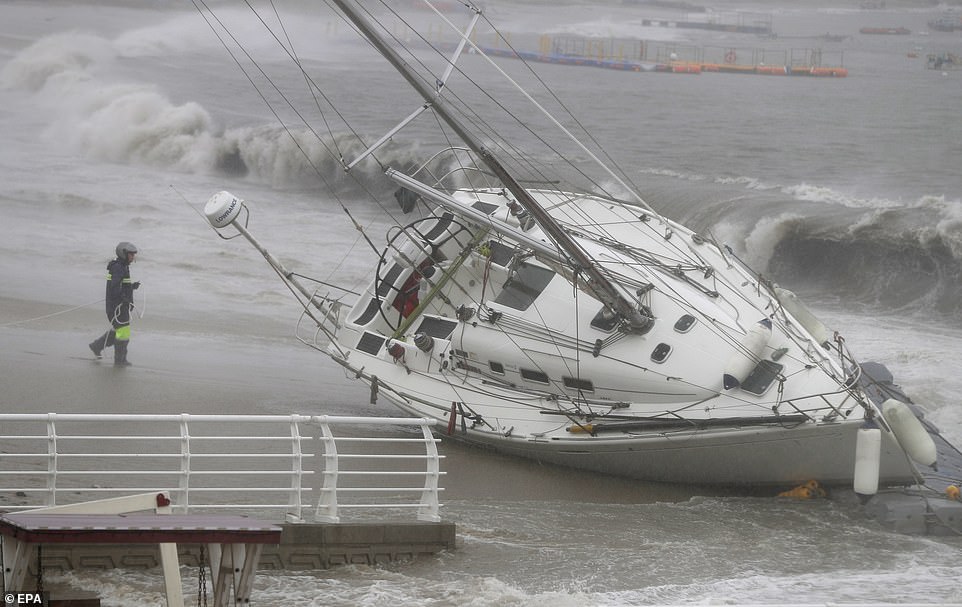 A yacht is pushed to shore by strong tides in Ulsan, South Korea. The country’s meteorological agency warned the eye of the storm would move closest to the southern coastal regions this evening 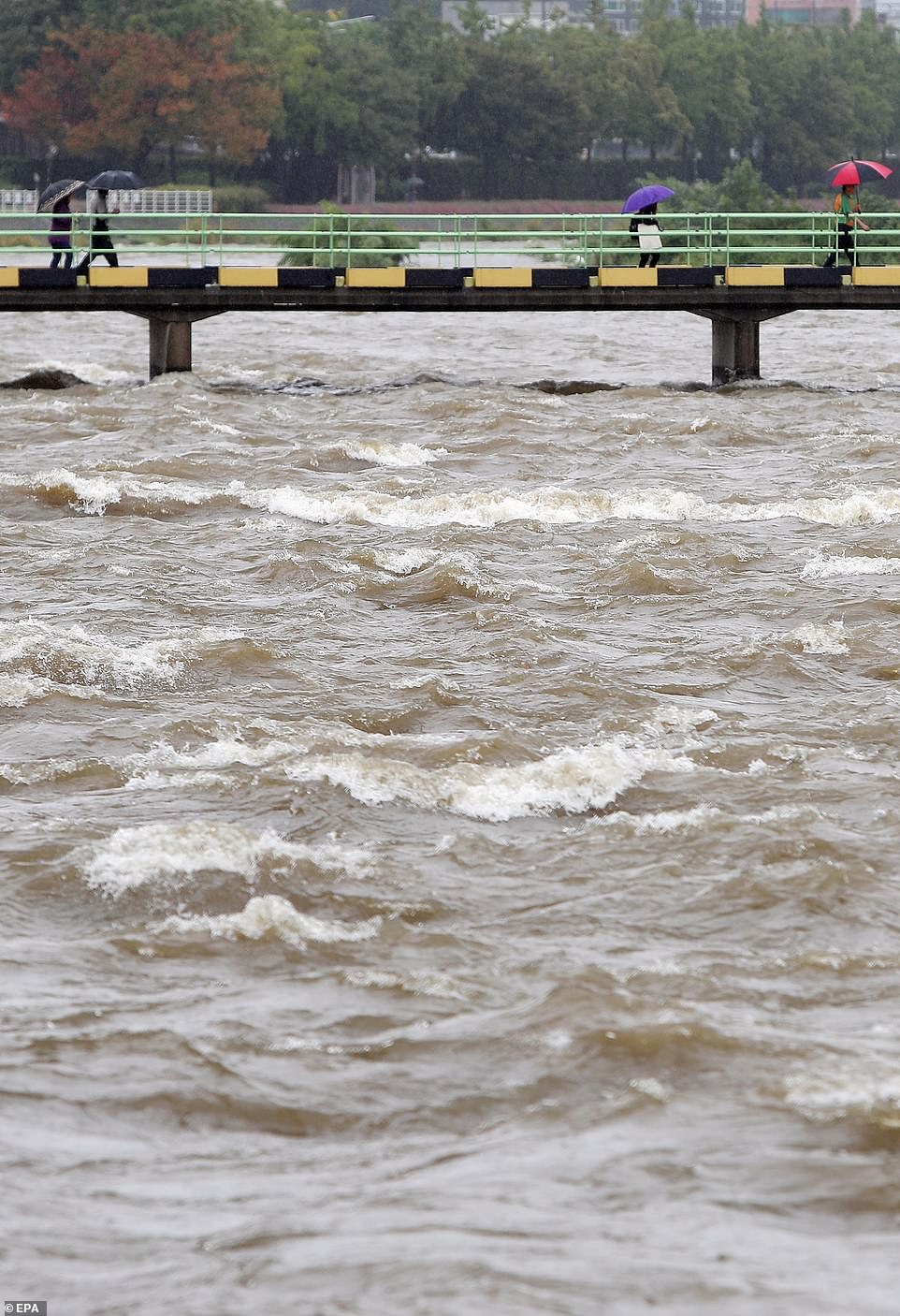 Heavy rain leads to an increase in the water level of a river in Daegu, South Korea, as pedestrians are seen heading over a bridge holding umbrellas

It resulted in a lengthy blackout on the outskirts of Tokyo that left tens of thousands of people without power for more than a week.