In December, he came a step closer to realising his dream of becoming a father of ten, when his wife Paris gave birth to their fourth child, daughter Valencia.

And boxer Tyson Fury, 29, looked every inch the family man over the weekend, when he stepped out with his growing brood during their sun-soaked break in Marbella.

In photographs obtained exclusively by MailOnline, the former world heavyweight champ is seen lugging his seven-year-old daughter Venezuela across his shoulders during a leisurely stroll with his wife of almost nine years and their offspring.

We are family: Tyson Fury was spotted getting playful with his seven-year-old daughter Venezuela while enjoying a family break in Marbella, Spain, over the weekend

The statuesque sportsman, who stands at a dizzying 6’9″, is also seen helping his eldest daughter overcome her fears, giving her a steady helping hand as she balances atop the rails of a wooden bridge.

Manchester-born Tyson – who is also dad to sons Prince John James, five, and Prince Tyson Fury II, one – looked a world away from his tough-talking pugilist persona as he frolicked with the youngsters.

His adoring wife, who looked casually cool on a white off-shoulder top teamed with lightly distressed jeans, looked on adoringly as she guided her youngest two children through the tree-lined streets in a double buggy. 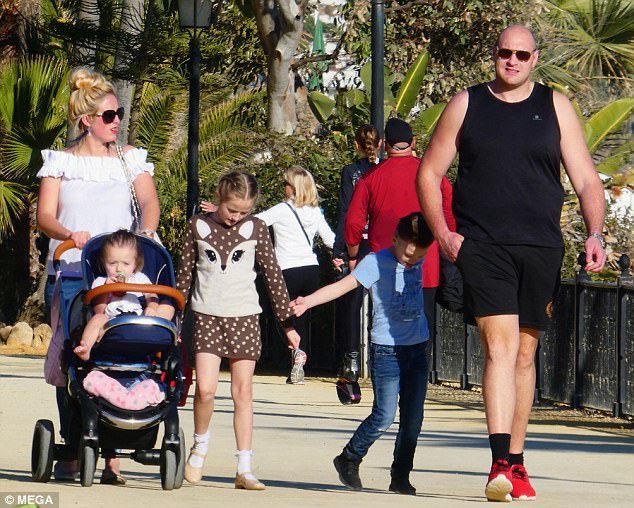 My wife and kids: The 29-year-old fighter stepped out with his wife Paris and their other children (L-R) Valencia, Prince Tyson Fury II and Prince John James 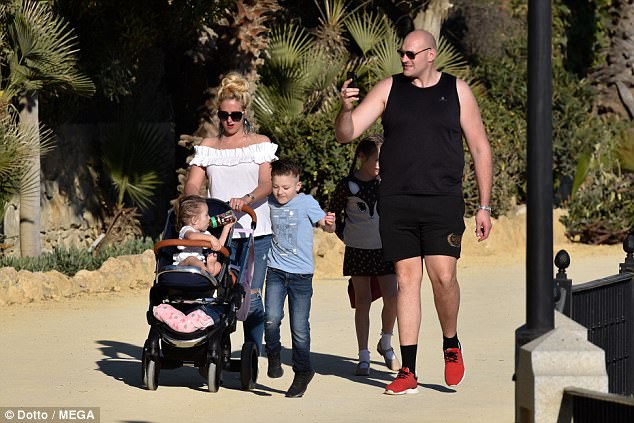 Tots: The couple’s two youngest offspring were guided along the streets in a double pushchair 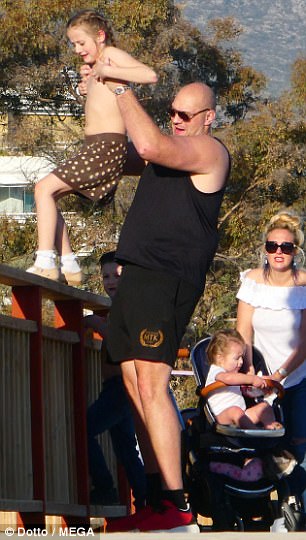 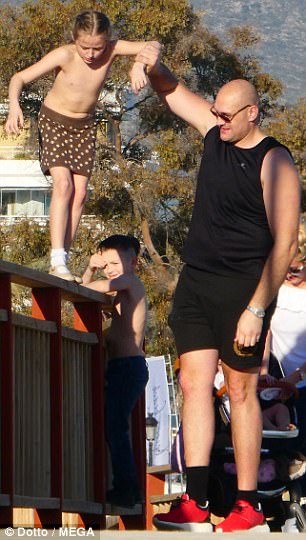 Helping hand: The sportsman helped his eldest daughter get to overcome her fears as he provided a steady helping hand while she balanced atop the rails of a wooden bridge 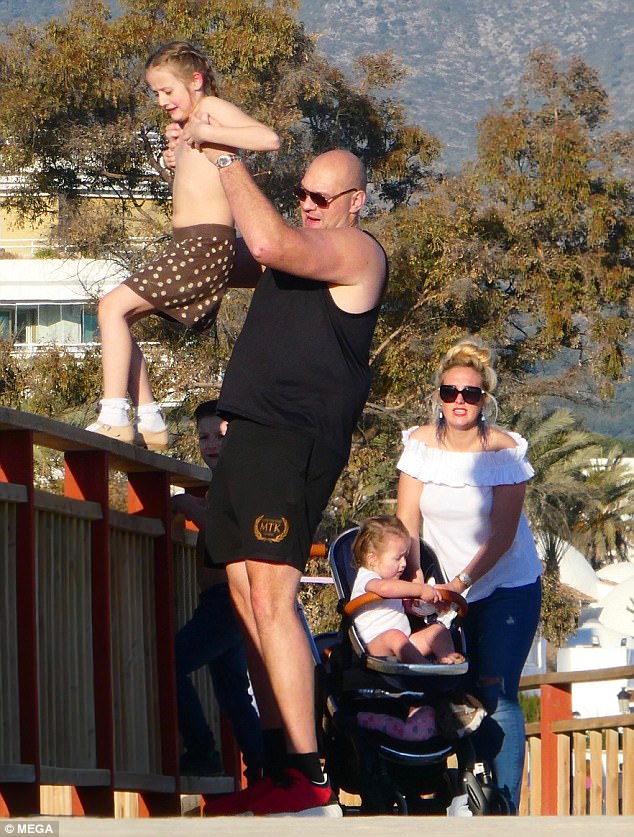 Unimpressed: However, Venezuela appeared eager to get back down after her brief adventure 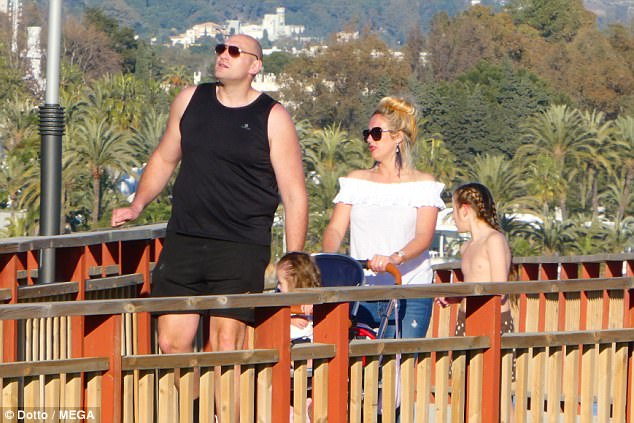 Enjoying the view: The family admired the breathtaking views as they paused from their stroll

The couple, who were childhood sweethearts, tied the knot in 2009 and are devout practising Catholics.

Tyson, who hasn’t fought professionally since beating Wladimir Klitschko in November 2015, looked a world away from his muscle-bound days in the ring.

Looking a little more rotund than fans have come to know him, he stepped out in a black tank top, which he teamed with matching shorts and red running shoes.

The star recently claimed that he was preparing for three fights in the next year, and last month he took to Instagram to share images of himself hitting the gym, where he worked on his reflexes by dodging a soft pink pole. 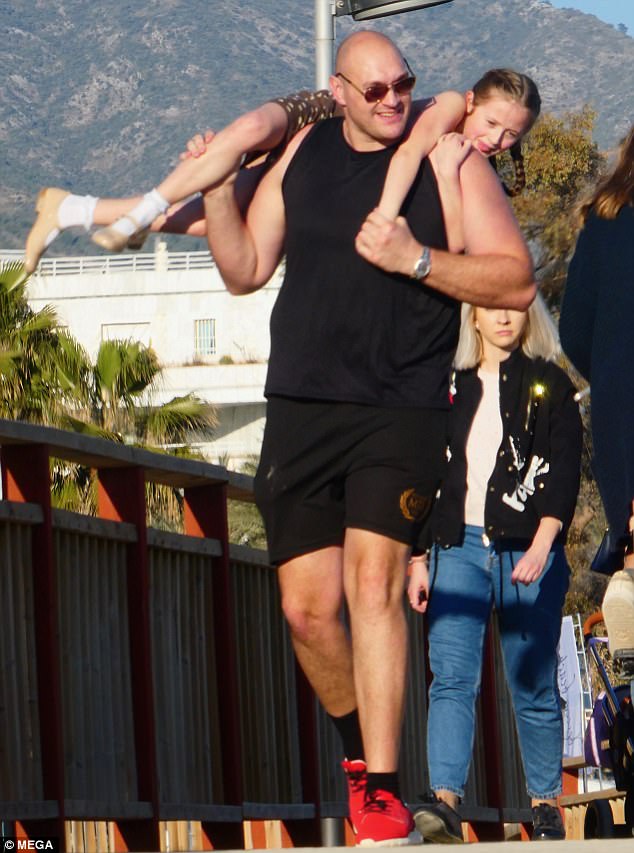 Strongman: The burly boxer showed that he’s still retained his strength as he carried Venezuela 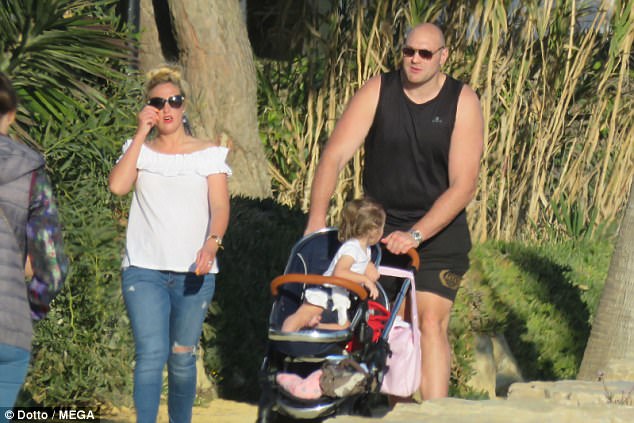 It’s handled: The sportsman took over pushchair duties as his doting wife strolled beside him

New look: The Manchester-born fighter looked a world away from his days in the boxing ring 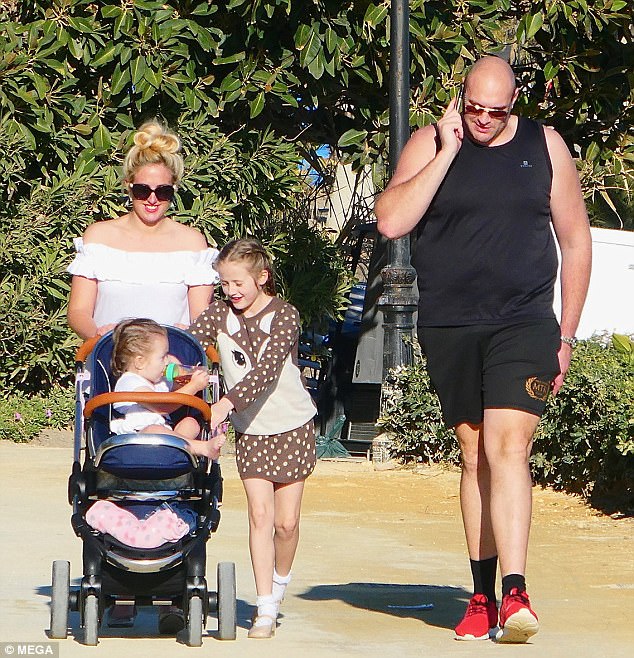 Phone chat: During their leisurely stroll, Tyson was seen chatting away on his mobile phone 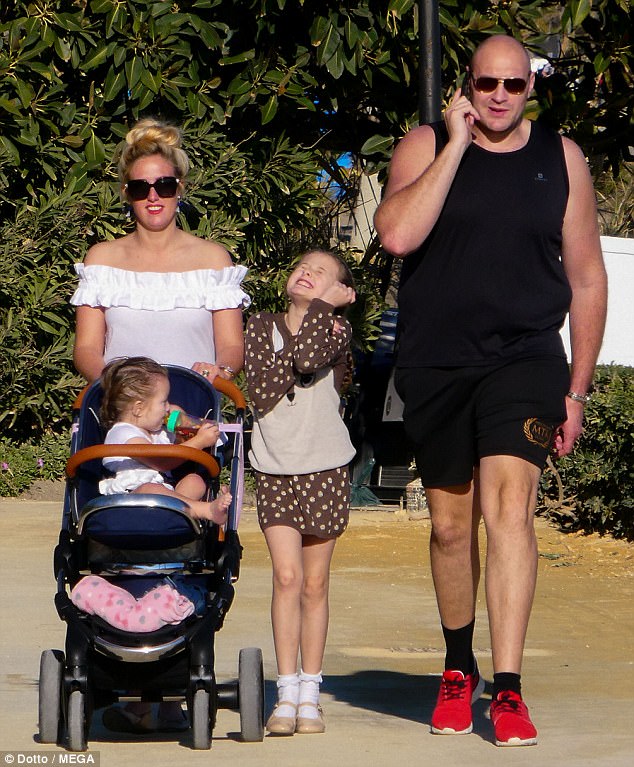 Smiles: Tyson, Paris and their children were all smiles as they basked in the glorious sunshine

Tyson tested positive for the banned steroid nandrolone in February 2015; however, he was not charged by UK Anti-Doping until June 2016 – by which time he had already defeated now-retired Wladimir.

The British boxer and his 23-year-old cousin Hughie Fury – with whom he was banned over the same findings – has vehemently maintained his innocence.

Following a series of hearings, UKAD announced in a statement in December: ‘Taking into account the delays in results management that meant charges were not brought in respect of the nandrolone findings until June 2016… 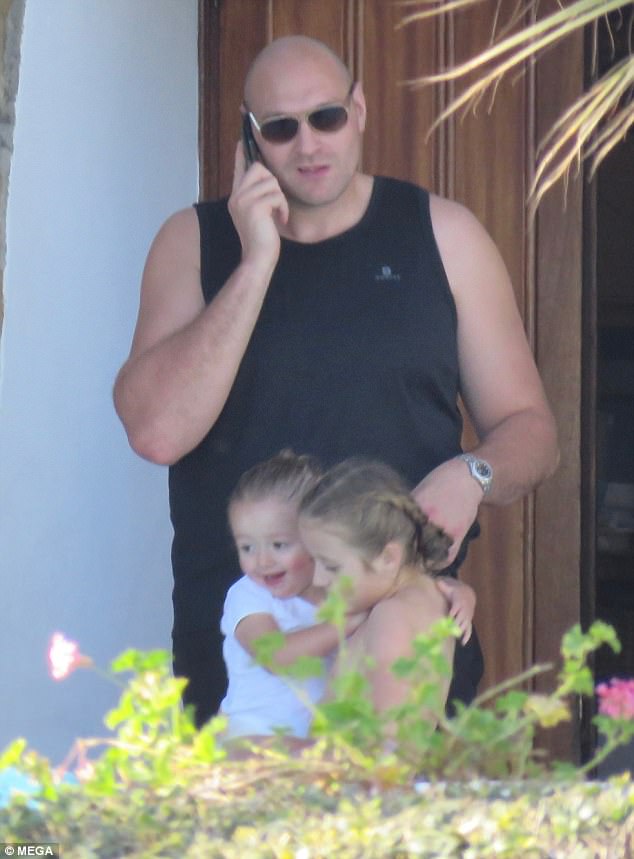 Playtime: Tyson’s adorable children played together as he continued to chat away on his phone 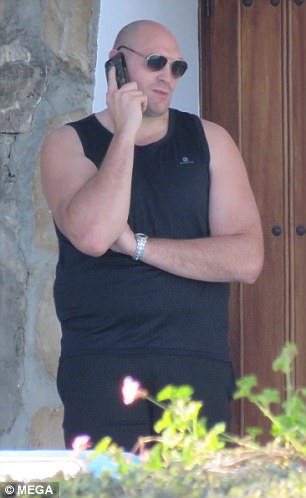 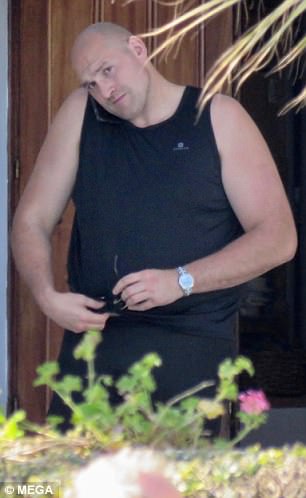 Time off: He hasn’t fought professionally since beating Wladimir Klitschko in November 2015 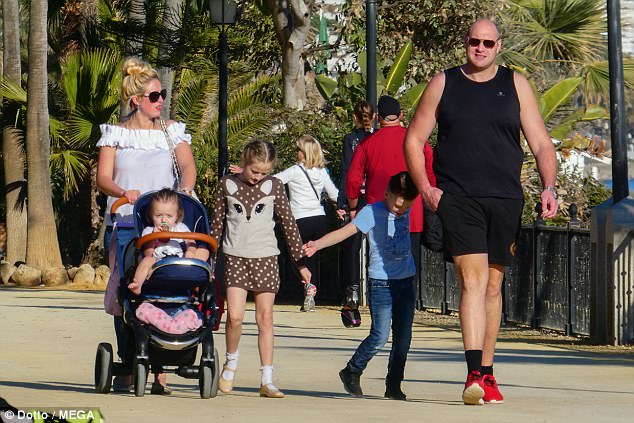 Sensational: Paris, who gave birth to their youngest child in December, looked sensational 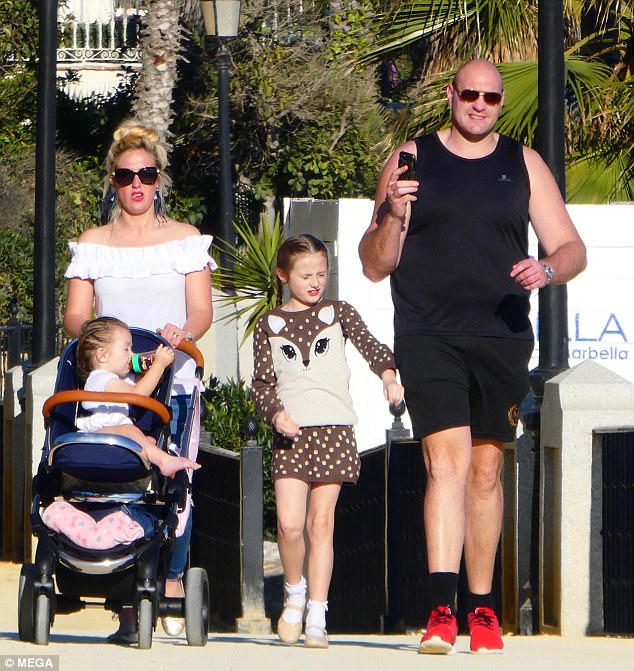 ‘And the provisional suspensions that Tyson and Hughie Fury have already effectively served, the two year period of ineligibility is backdated to 13 December 2015, and therefore expires at midnight on 12 December 2017.’

Tyson subsequently announced last month via his Twitter account that he would be re-applying for his boxing licence though the British Boxing Board of Control, and would defend his Ring Magazine title in April.

However, he later lost his title after failing to schedule his long-awaited comeback fight by their January 31 deadline.

The British Boxing Board Of Control has agreed to reinstate Tyson’s licence, as long as he submitted current medical records. 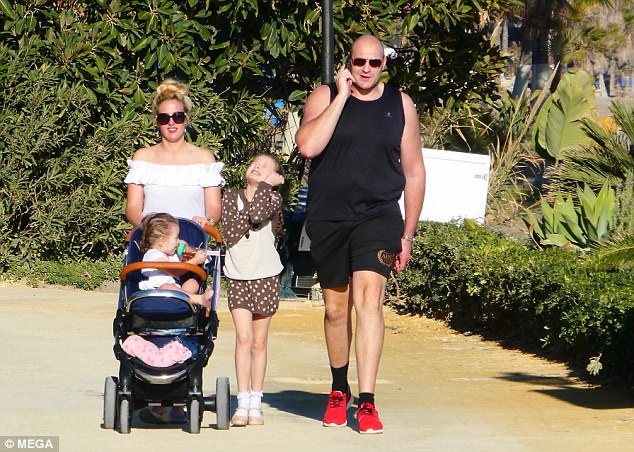 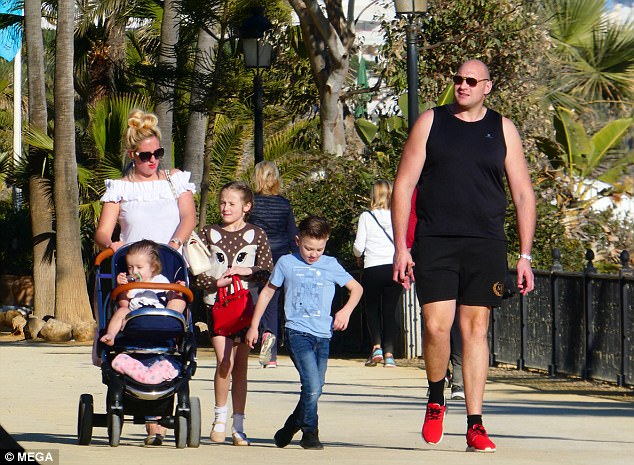 Delayed charges: However, he was not charged by UK Anti-Doping until June 2016 – by which time he had already defeated now-retired Wladimir Klitschko 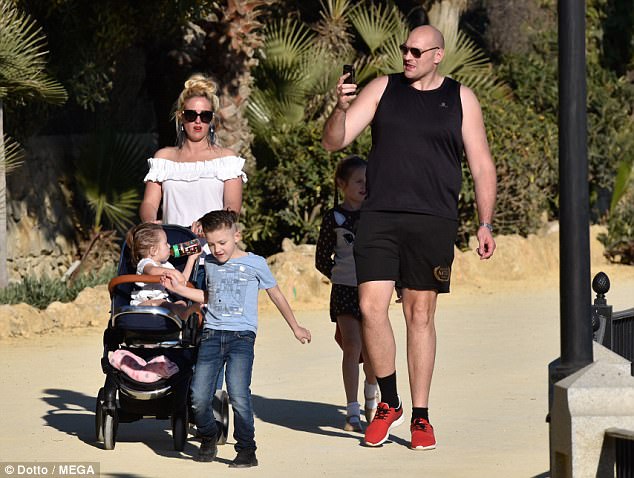 Reinstated: In December, the British Boxing Board Of Control agreed to reinstate Tyson’s licence, as long as he submitted current medical records 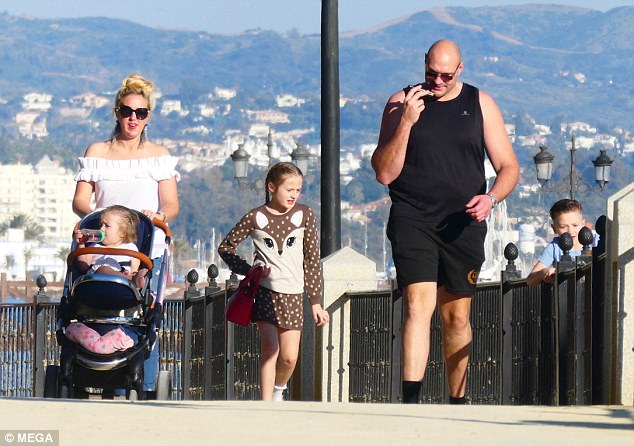 Comeback: The former heavyweight champ has claimed that he’s preparing for three boxing bouts in the next year, and last month he shared footage of himself training in the gym