U.S. Central Command orders 500 military personnel to RESUME fight against ISIS in eastern Syria – a year after Trump shocked allies by withdrawing most of his troops from the country

U.S. Central Command chief General Kenneth McKenzie said on Saturday about 500 personnel in east Syria are expected to resume operations against the Islamic State in coming days and weeks.

ISIS has lost nearly all its territory in Syria and U.S. forces killed its former leader Abu Bakr al-Baghdadi last month, but the group that once controlled a third of Syria and neighboring Iraq is still seen as a threat.

The administration of President Donald Trump shocked U.S. allies last December by saying Washington was pulling out all its troops from Syria.

It said later it decided to keep a residual force in the northeastern part of the country, focusing on preventing Islamic State from staging a comeback and attacking the oilfields there. 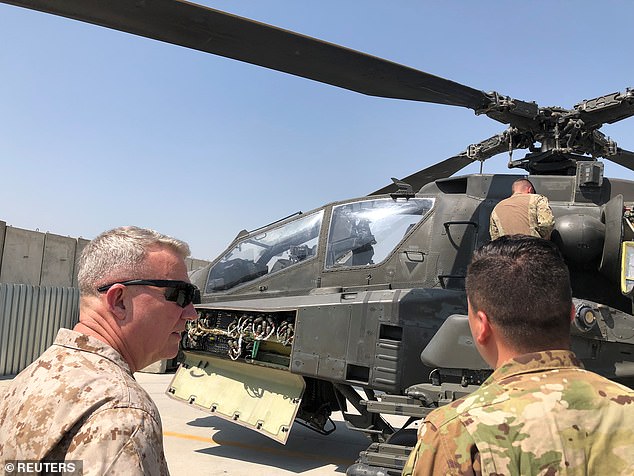 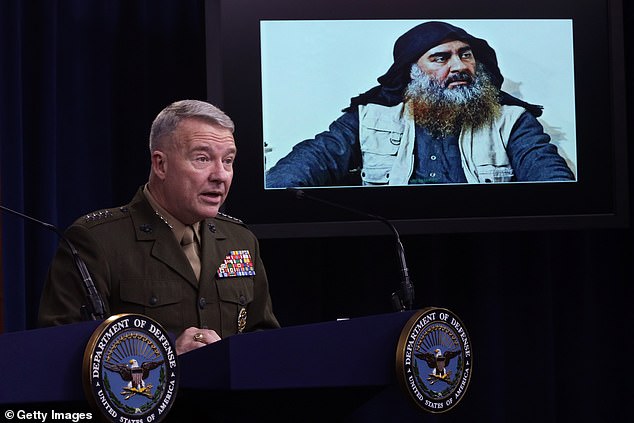 U.S. Marine Corps Gen. Kenneth McKenzie, commander of U.S. Central Command, speaks as a picture of Abu Bakr al-Baghdadi is seen during a press briefing October 30, 2019 at the Pentagon in Arlington, Virginia.  McKenzie says the U.S. will step up operations against ISIS in  Syria up to 500 troops 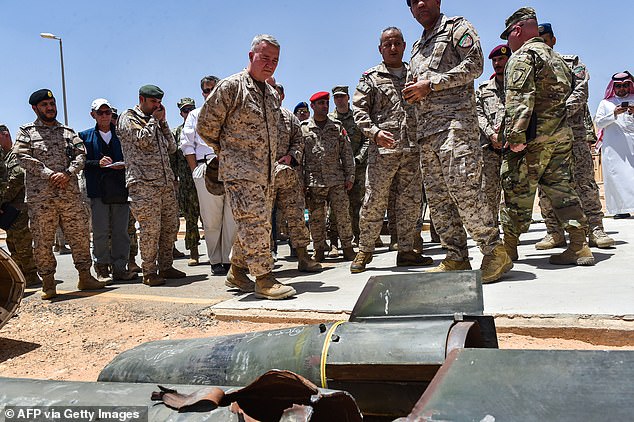 General Kenneth McKenzie. head of Central Command, seen during a visit to military base in Saudi Arabia in July 2019. He said 500 troops are ready to resume the military campaign in Syria against ISIS. ‘It is our intention to remain in that position working with our SDF (Syrian Democratic Forces) partners to continue operations against ISIS down the Euphrates river valley where those targets present themselves’

Trump’s former defense secretary James Mattis was outspoken of the troop reduction, telling the Washington Post at the time: ‘If we don’t keep the pressure on, then ISIS will resurge.’

‘Now I’ve got about 500 U.S. personnel generally east of the Euphrates river east of Deir al Zor up to Hasaka, northeast all the way up into extreme northeast Syria,’ McKenzie told reporters on the sidelines of the Manama Dialogue security summit in Bahrain.

‘It is our intention to remain in that position working with our SDF (Syrian Democratic Forces) partners to continue operations against ISIS down the Euphrates river valley where those targets present themselves,’ he added.

Turkey launched and then halted an offensive against the YPG, the main component of the U.S.-backed SDF that helped the United States defeat Islamic State, which it sees as a terrorist group with links to Kurdish militants on Turkish soil.

Moscow, the main backer of Syrian President Bashar al-Assad, said this week it was also in the process of deploying more Russian military police to northeast Syria, setting up field hospitals for civilians, distributing humanitarian aid and rebuilding infrastructure.