Controversial Brazilian UFC fighter Paulo Costa has unleashed a stunning attack on his national football side and has declared they cannot win the 2022 FIFA World Cup.

The off-contract UFC star let rip on Twitter this week with stunning and hugely offensive comments about the team.

Brazilian soccer team were respectable when they had drug dealers to make party’s officials and shemale f***er Like Ronald(o) at 2006 or 2002,’ he said.

‘Now they all are feminists or apologize for being straight white . They cannot win world cup sorry. Bring old times back.’

Costa is no stranger to outrageous social media posts.

He has previously claimed to be drunk while fighting Israel Adesanya, posted a video of Adesanya fleeing from him in the ring, shared a video of his ‘secret juice’ that gets him jacked, has claimed the NASA Mars lander was staged and has even joined the ranks of flat-earthers. 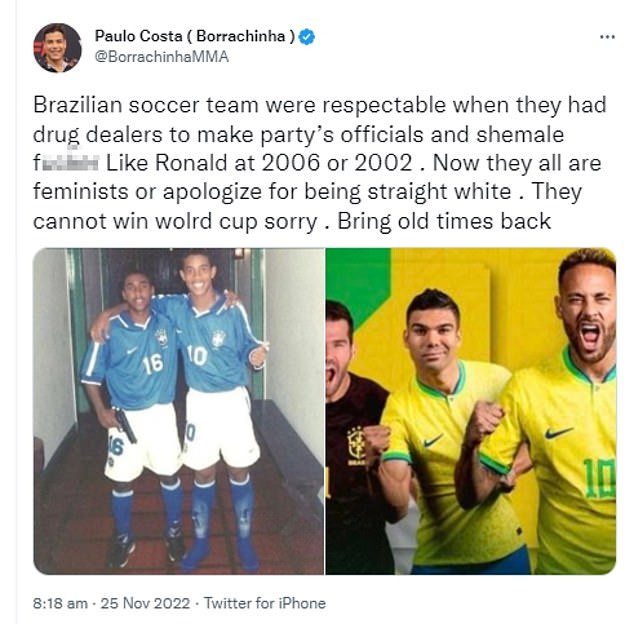 Costa is scheduled to fight Australian Robert Whittaker at UFC 284 in Perth next February.

‘I don’t know him really, I feel like he acts quite silly on his [social] pages but it’s not out to hurt anybody, it’s not too offensive to anybody I don’t think,’ Whittaker said of Costa in October.

‘But I don’t follow him, I am not a ‘fan’, so it’s hard to say exactly what he does. But if he’s not hurting anybody and people get a laugh out of it, who cares?’

A win over the Australian could put Costa’s stalled UFC career back on track, with the winner likely to be in contention for a title fight.

However Costa’s outburst is unlikely to go down well with UFC powerbrokers and he remains out of contract and looking destined to switch to boxing instead. 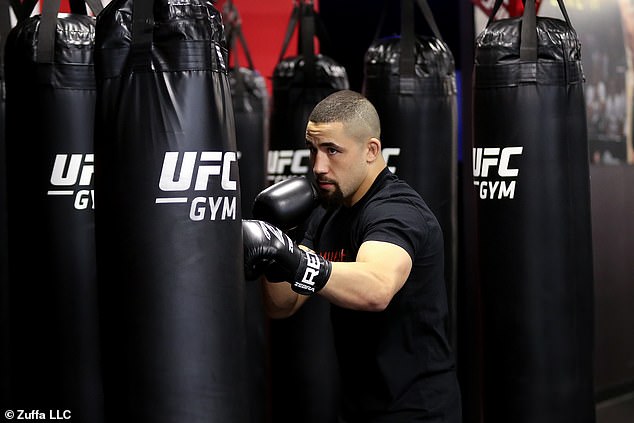 ‘Anything is possible. I have one fight left and I’m not very sure. I’ve got some lawyers looking at the contract, seeing how it works, because it can also be terminated over time. Maybe I don’t even need to fight to finish my contract. 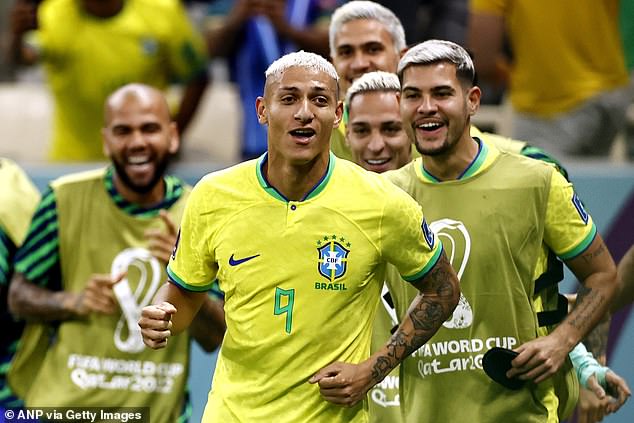 ‘We need to know how to take care of our stuff and the UFC contract is business.

‘I need to be aware of how it works so I don’t make a mistake, I need to make the most out of it. I have one fight left or the time clause. I believe that’s it, but I’m still talking to my lawyers.’

Costa said he wants to fight Whittaker, but will not commit until the contract dispute is resolved.