It is sometimes said that politics is a blood sport, and nobody knows that more than these Ugandan MPs who were involved in a mass brawl inside their parliament on Tuesday.

Dozens of lawmakers came to blows as members of the opposition party tried to stop the ruling body from passing a law removing the age cap from the presidency.

The fight started after some opposition ministers accused ruling party members of carrying guns, sparking a fierce argument which turned into pushing and eventually brawling.

Punches and chairs were thrown as ministers fought on tables and across rows of seats before plainclothes secret service agents hauled members of the opposition from the main chamber of parliament, located in Kampala. 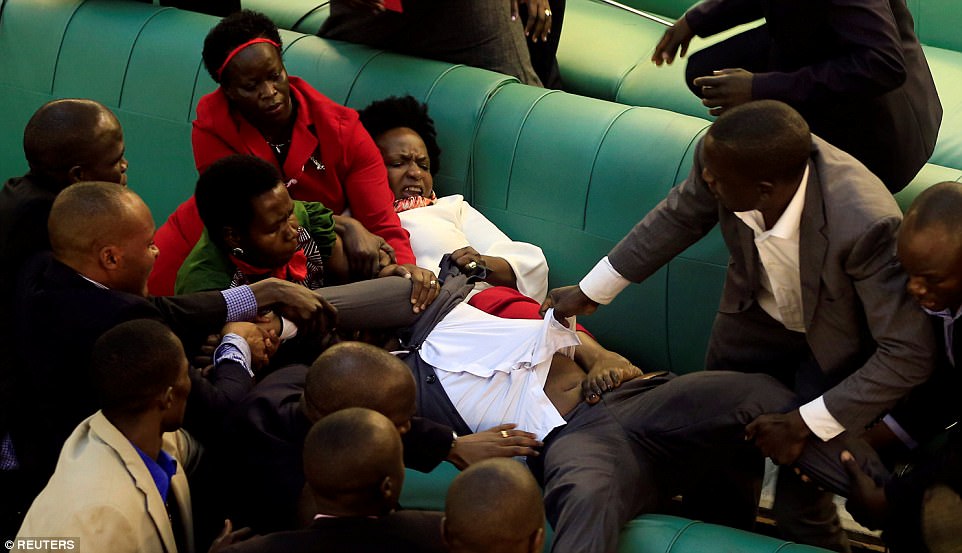 Opposition MPs fought with members of the ruling party as they accused President Yoweri Museveni, 73, of trying to rule the country for life. The current age cap is 75 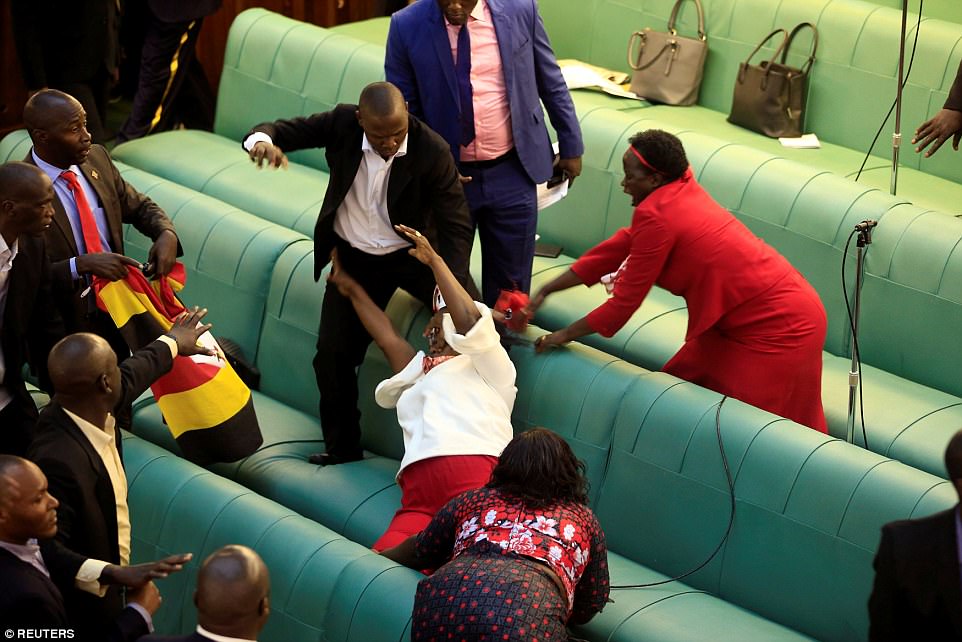 Plainclothes members of the security services stepped in to quell the violence, before dragging members of the opposition party out of the main chamber by force 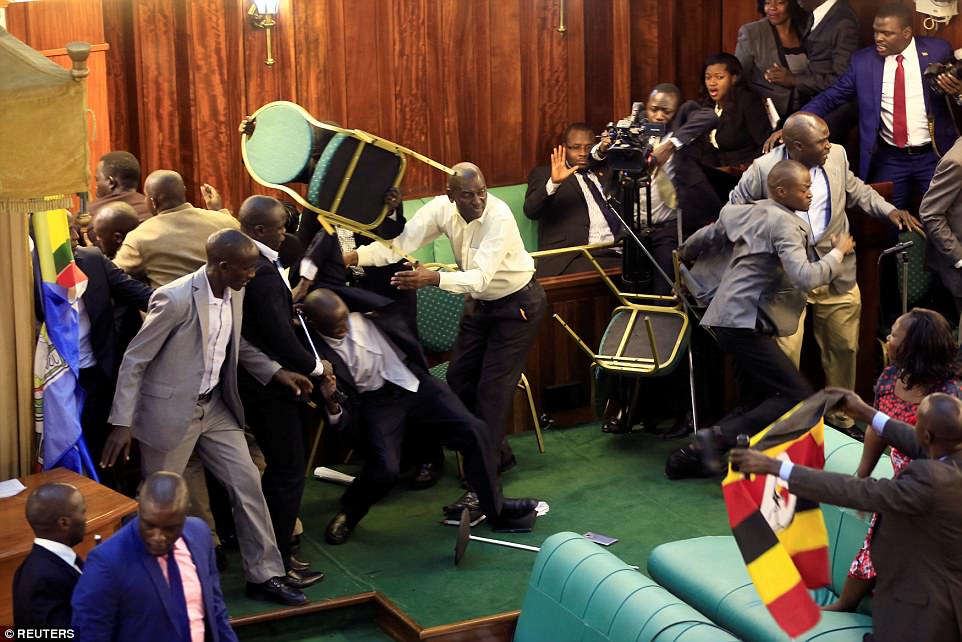 Chairs and punches were thrown during the fiery exchange in parliament. The ruling party in Uganda has a huge majority and the bill is expected to pass easily when it comes to a vote 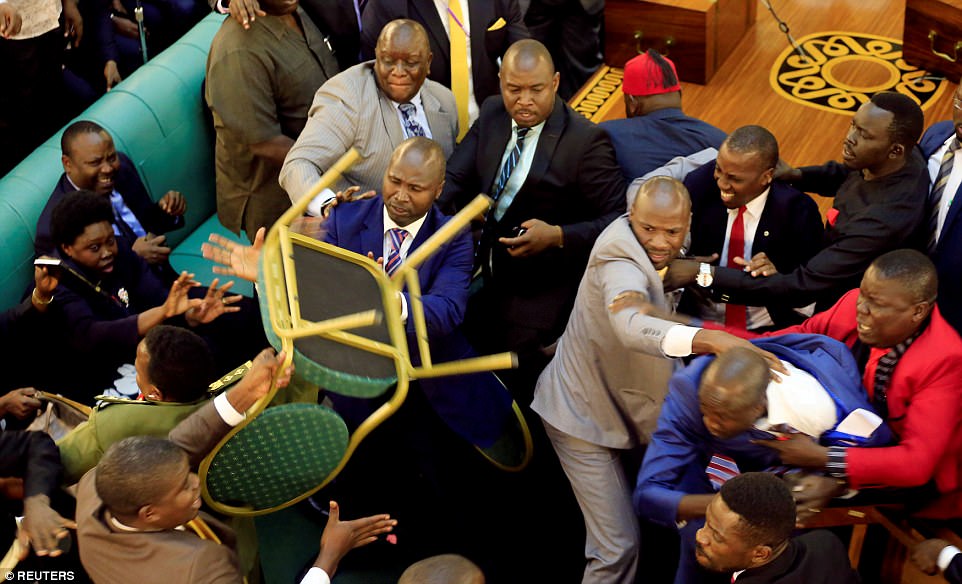 The opposition party leader eventually led her MPs in a walk-out after several members were removed by the security forces. She accused the ruling party of intimidation 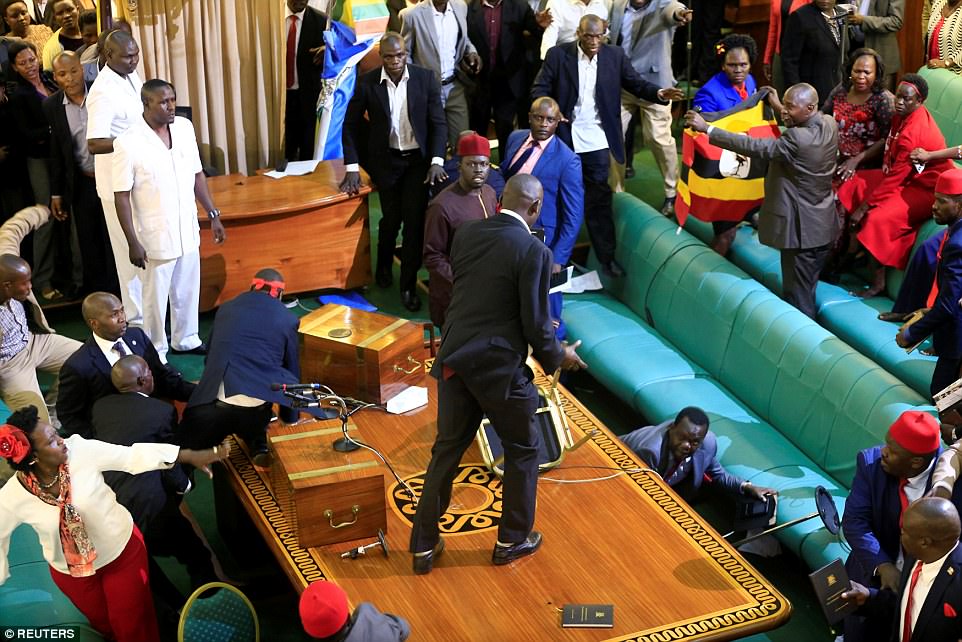 Ministers climbed on the table separating sides of the house as the session spiralled out of control. There have been protests on the street over the decision to extend the president’s term, which have also led to violence 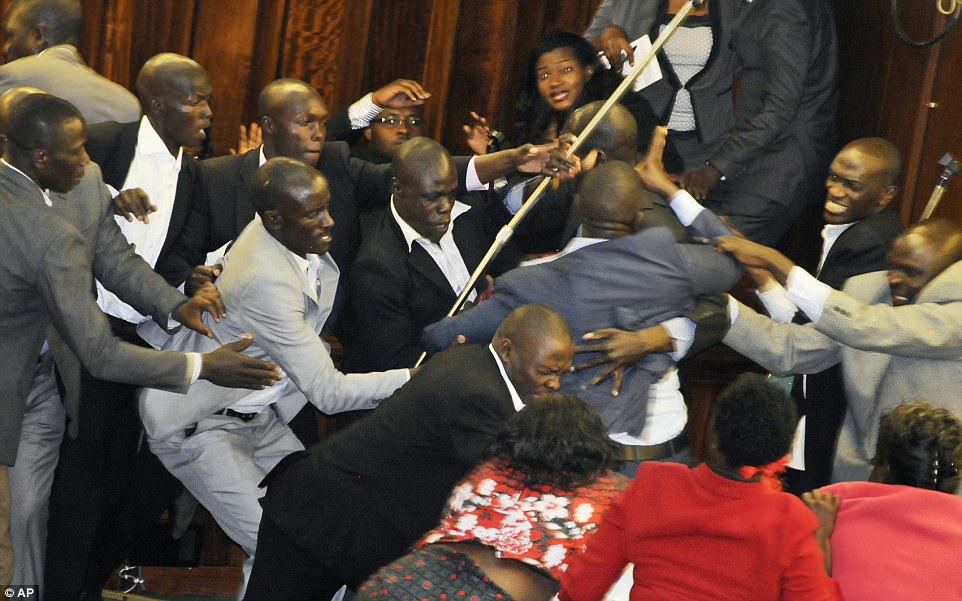 President Museveni has refused to be drawn on whether he would run again in the next elections, saying it is ‘not important’, but opposition leaders say he is trying to remove the last barrier to life-long rule

After most of her ministers were hauled away by force, the leader of the opposition led the rest of her members in a walk-out, accusing the majority party of intimidation.

Ugandan law currently bans anyone over the aged of 75 from holding the country’s highest office, meaning current President Yoweri Museveni, 73, is ineligible to run in the next election.

But his party, the National Resistance Movement, has now brought a bill to scrap that law. Maximum term limits have already been removed, meaning the new rule change would allow leaders to rule indefinitely.

The National Resistance Movement holds a massive majority in parliament, meaning the law is almost certain to pass when it goes to a vote.

Musaveni has so far refused to be drawn on whether or not he wants to run at the next election, saying that the issue is ‘not important’. 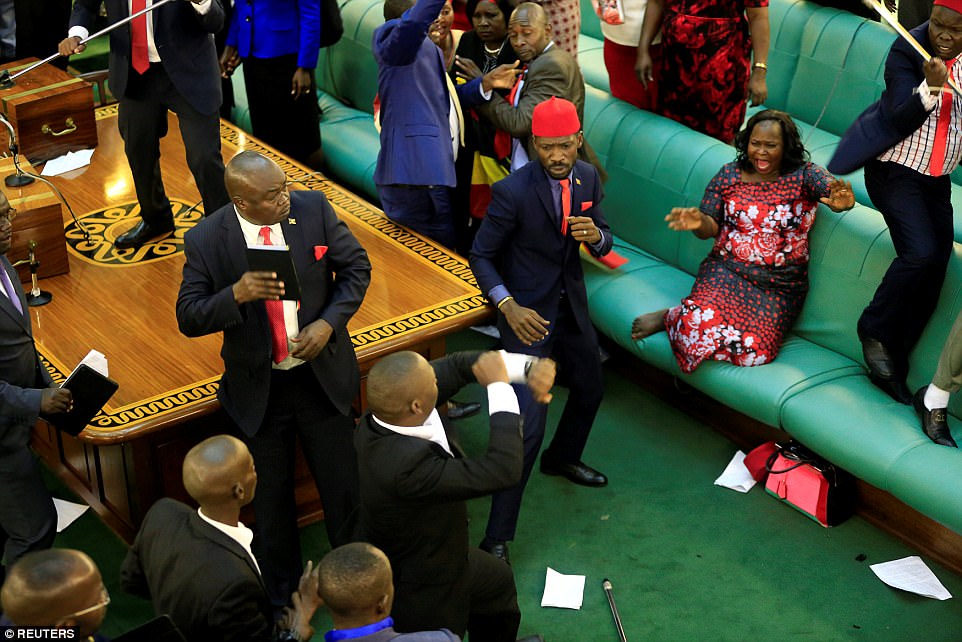 This is not the first time politicians have been injured over this bill. The mayor of Kampala, where this fight took place, says he was forced to seek medical treatment after police ‘squeezed’ his genitals while breaking up a protest over the issue 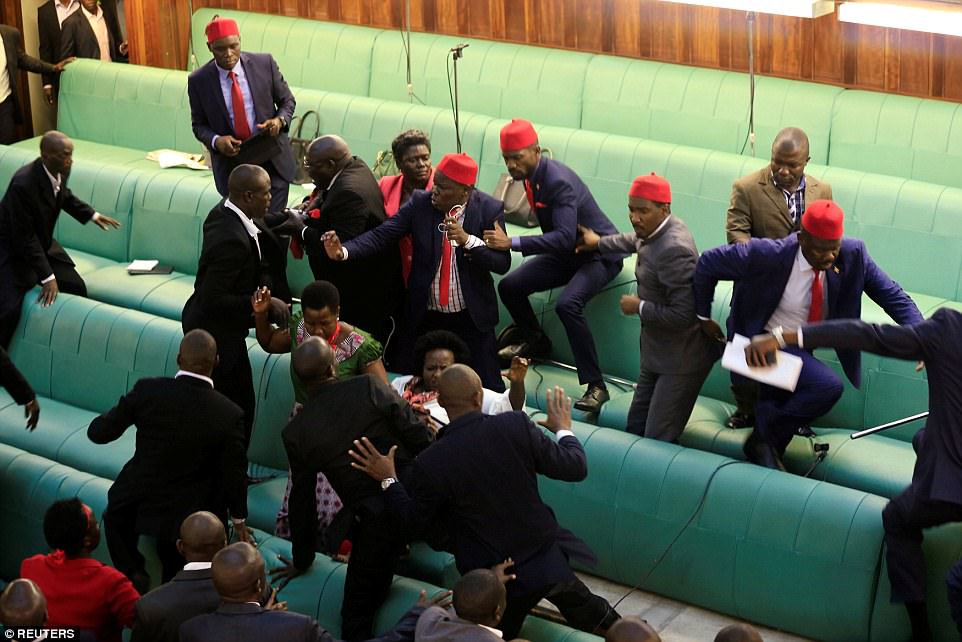 President Musaveni’s rule has been marred by widespread allegations of intimidation and fraud at the polls, alongside repression of opposition political parties 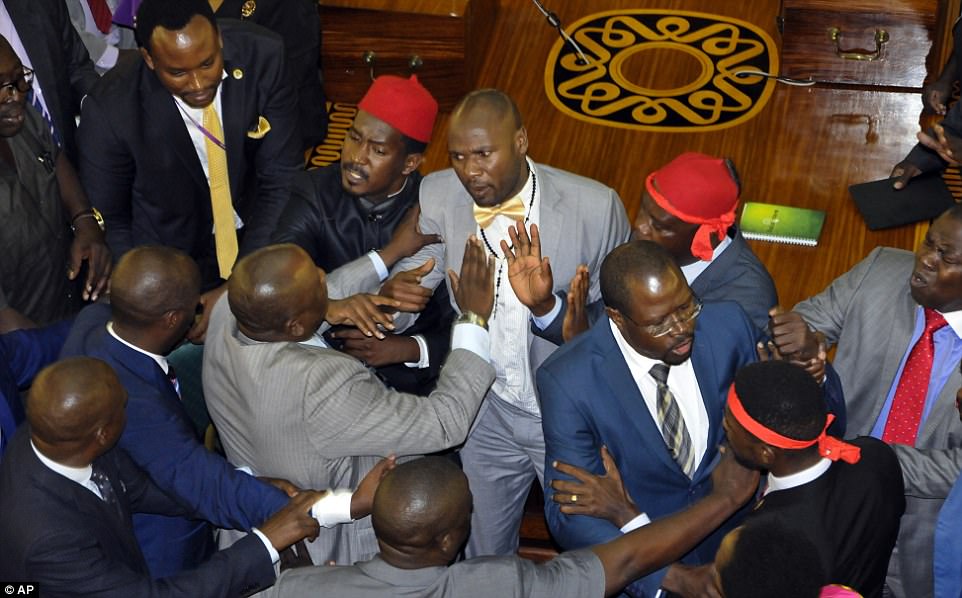 The fight started with arguments over the dispatch box which quickly turned into pushing and shoving before punches started being thrown, with security having to break it up 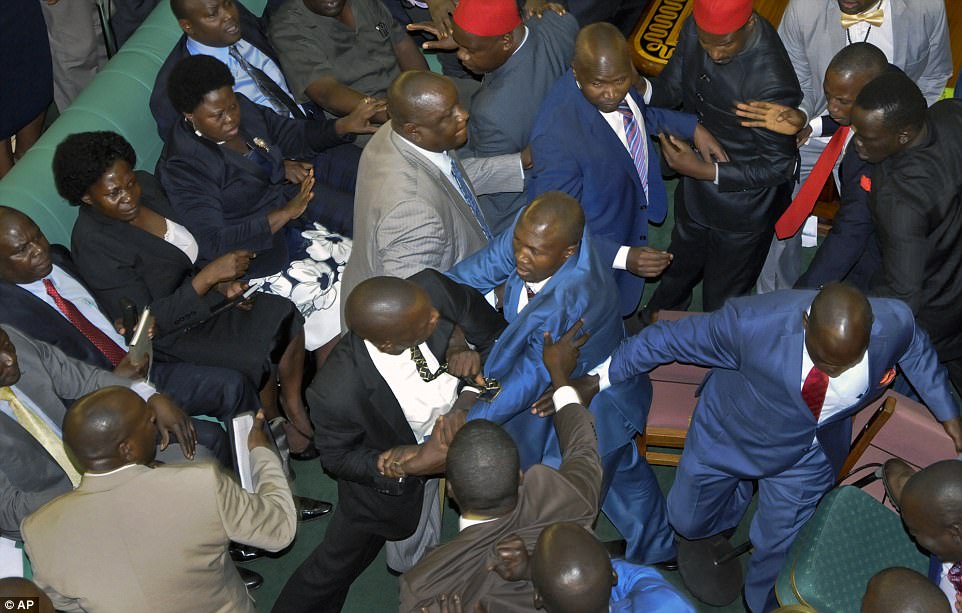 Opposition members accused ministers from the ruling party of carrying guns, sparking a vicious argument when eventually turned into a fight involving dozens of people 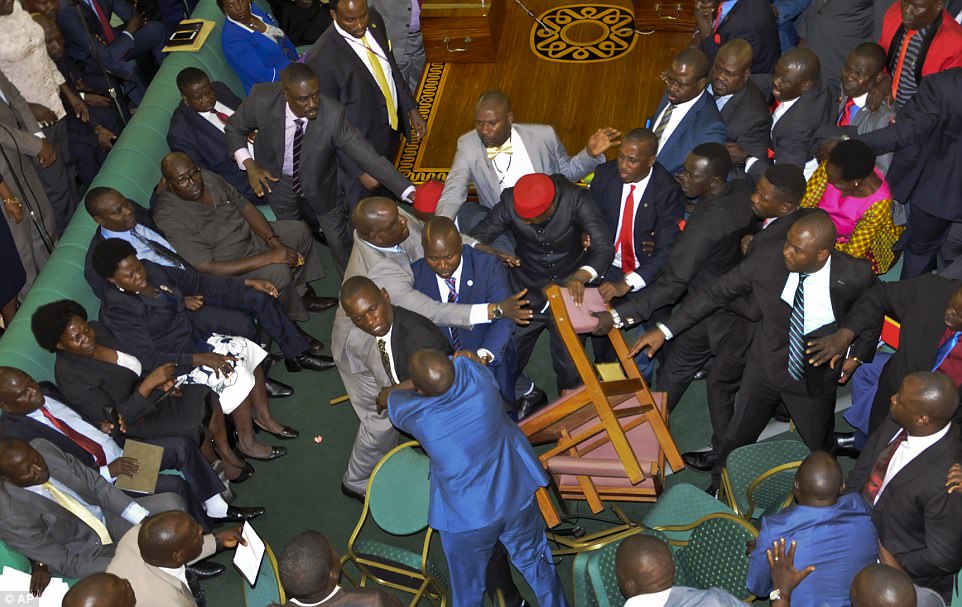 Moments after the fight broke out dozens of ministers had joined the fray, forcing security services to step in 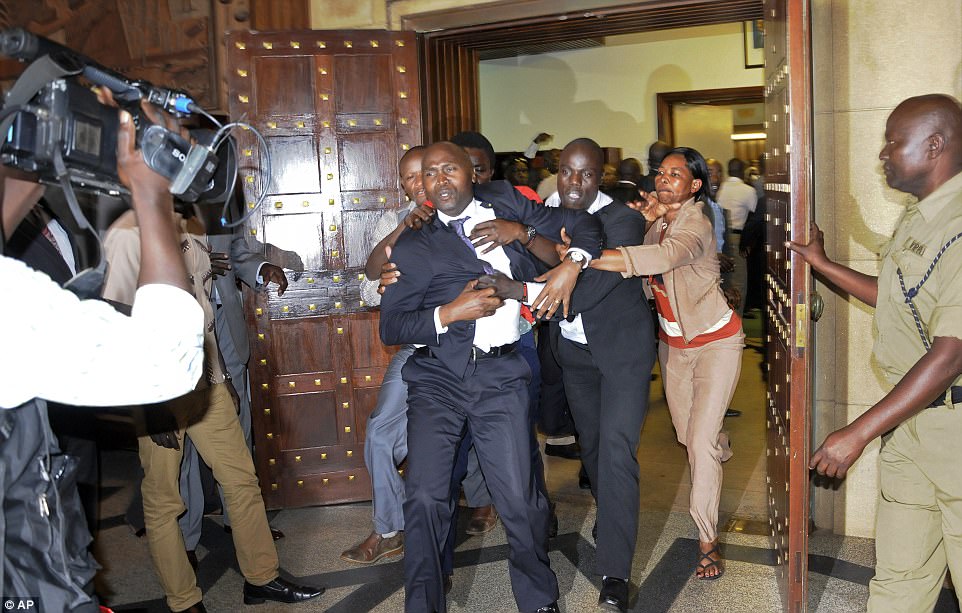 Theodore Sekikuubo, who is a member of the ruling party but opposes the extension of presidential age limits, is dragged out of the chamber by security 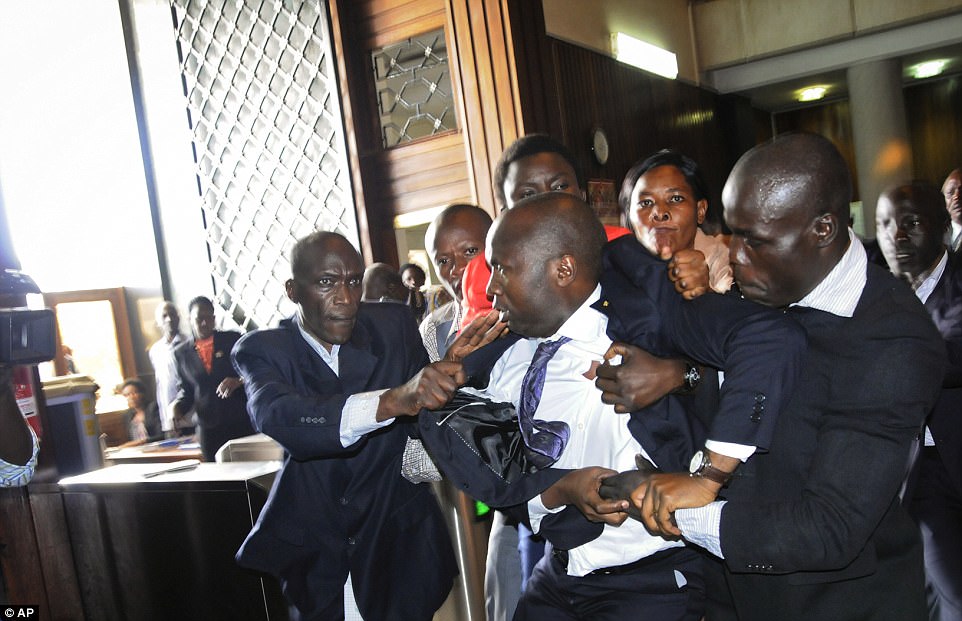 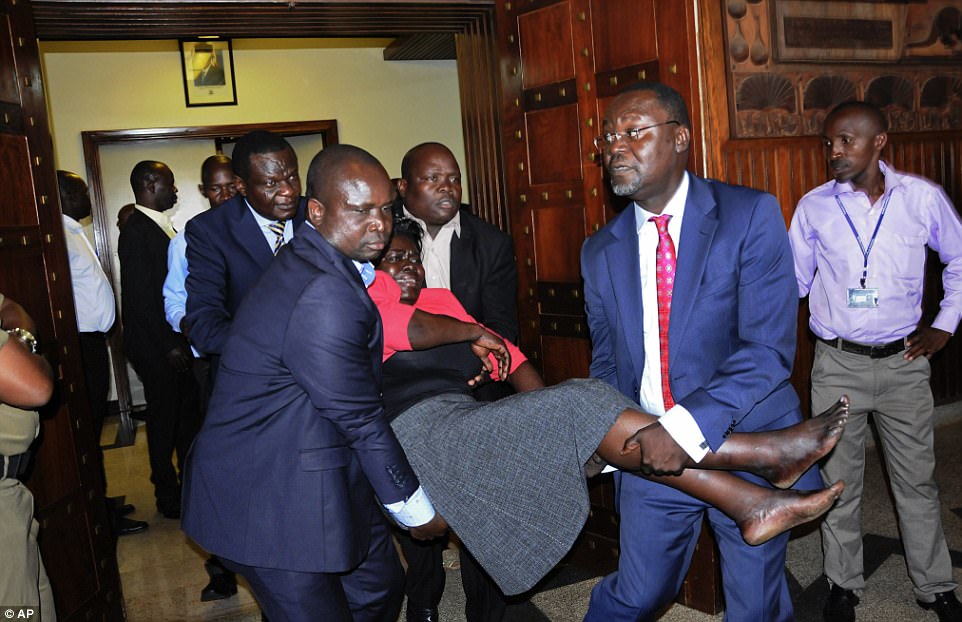 Angelina Ossege, a member of the opposition party, is carried to hospital by members of her own party after being hurt during the fight that broke out on Tuesday

Police have violently broken up street demonstrations protesting the effort to amend the constitution, arresting scores since the past week.

Erias Lukwago, the mayor of the Ugandan capital of Kampala, told reporters he is getting medical care after police officers allegedly ‘squeezed’ his genitals while arresting him outside his house last week.

Museveni, a U.S. ally on regional security, took power by force in 1986 and was re-elected last year in a poll marred by allegations of fraud and voter intimidation.

Although Museveni warned in the past that Africa’s problem was leaders ‘who want to overstay in power,’ he has since said he was speaking about leaders who were not elected.

Uganda has never seen a peaceful change of power since independence from Britain in 1962.