‘Ugh! This was written by MEN!’ AOC and Elizabeth Warren complain about ending of Game of Thrones

Massachusetts Senator Elizabeth Warren and freshman Representative Alexandria Ocasio-Cortez said the finale of HBO’s hit show Game of Thrones was ruined by men thinking women are too emotional to lead.

‘I feel like we were getting so close to having this ending with just women running the world, and then the last two episodes it’s like, ‘Oh, they’re too emotional, the end’ Ocasio-Cortez said of the series finale, which aired Sunday night,

‘It’s like, ugh! This was written by men,’ Ocasio-Cortez lamented.

In a video posted to Twitter Tuesday, where the two appeared side by side, Warren, a 2020 Democratic candidate for president, agreed with the assessment by the congresswoman from New York.

‘Working family-focused policies + Game of Thrones gender convos. Elect you an official that can do both,’ Ocasio-Cortez tweeted along with the video, adding that the two would also be releasing another video later in the week that would include ‘something we’re working on.’

New York Rep. Alexandria Ocasio-Cortez (right) and Massachusetts Sen. Elizabeth Warren said they were disappointed in the ending of hit HBO show ‘Game of Thrones’ because a woman did not end up ‘running the world’ 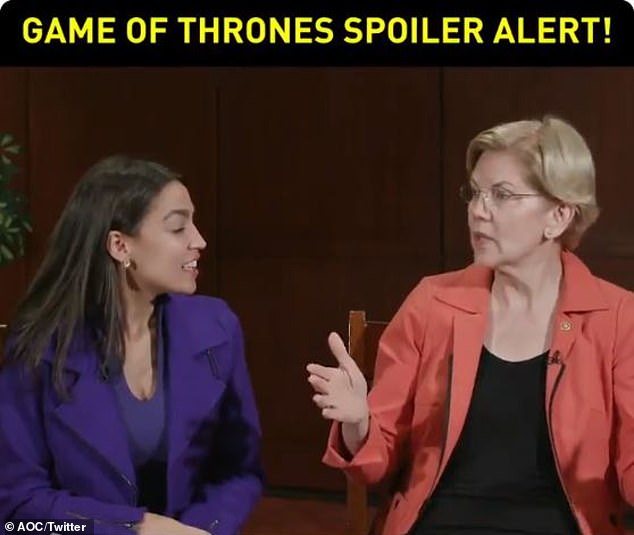 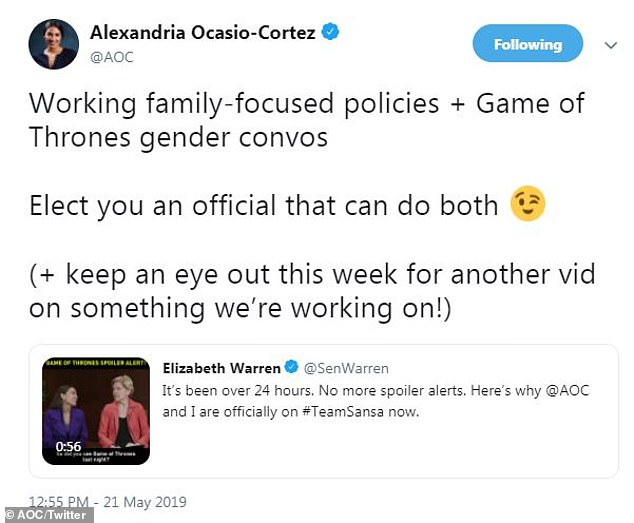 In a tweet with the video of the two talking about the hit show, Ocasio-Cortez said another video of the two would be released later in the week with ‘something we’re working on,’ – likely more policy related

The popular show has a cult-like following, and was based on a novel by George R. R. Martin ‘A Song of Ice and Fire.’ It concluded over the weekend after airing on HBO for eight years.

The main quest in the series is the battle to find the rightful king or queen to rule over the seven kingdoms in Westeros, and sit on the so-called ‘Iron Throne.’

The conclusion left many fans unsatisfied – and even angry – when one of the main heroines, Daenerys Targaryen, went crazy and burned a whole city with her dragon.

Antagonist, and Targaryen’s lover, Jon Snow, killed her when it became clear that she had gone crazy and would use her new power to burn other cities to the ground.

Snow stabbed the woman he loved while the two shared a last kiss, and he wept over her dead body.

Many who follow the show closely felt that Targaryen was the rightful heir to the throne, and were cheering for a woman to lead, and others cheered for Snow to take control and rule as King. 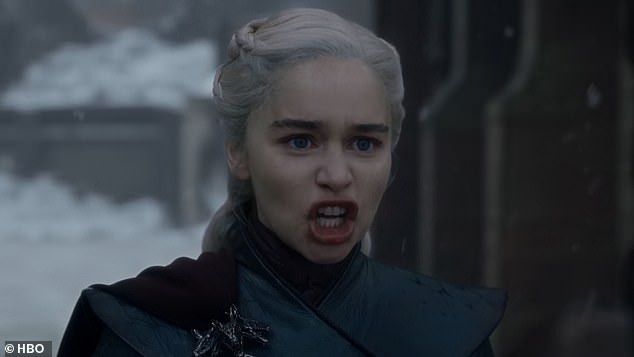 Instead of sparing the lives of innocent citizens, female protagonist Daenerys Targaryen chose to burn the city while riding her Dragon. Many wanted this character to end up as the victor in the fight to rule over Westeros 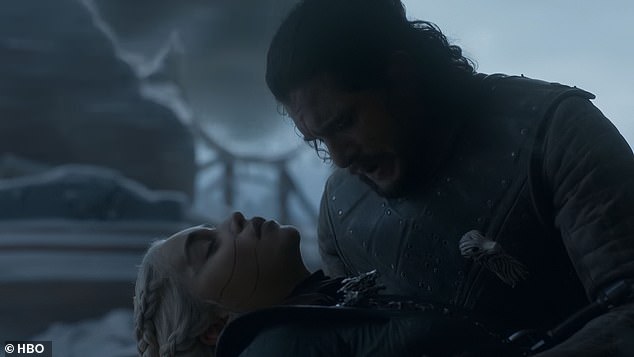 Jon Snow, her lover (and relative), ended up killing her when he found out that she would continue to use her power and position to cause destruction 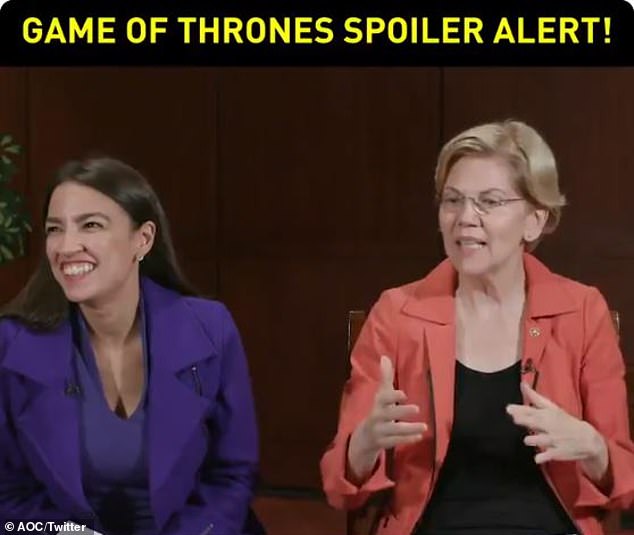 The two lawmakers even said they would have been happy if Sansa Stark, another female character, would have ended up as Queen instead of her brother becoming King 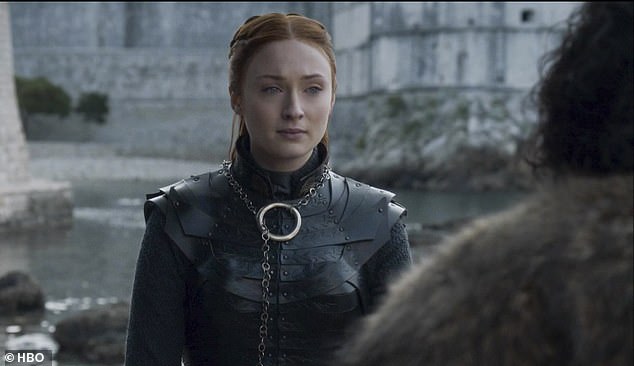 Sansa Stark went on to rule as Queen of the North, but did not become the Queen of Westeros

Neither ended up sitting on the throne, with one dead and the other banished to the north. But a man, Bran Stark, was chosen to rule.

Warren felt that Bran’s older sister, Sansa Stark, should have been the one to take the throne when Snow and Targaryen were no longer able.

‘I was even willing, at the end, to make a quick allegiance shift when Dany went nuts,’ Warren said, referring to the character by a nickname used by fans. ‘So I was over to Sansa. I was like, Team Sansa.’

Sansa, although not the queen of Westeros in the end, did maintain her title as Queen of the North.

‘I was disappointed,’ Ocasio-Cortez said of the finale. ‘We need to get some feminist analysis up in HBO.’

‘They need some help on this,’ Warren responded.

The author of the book the series was based on is a male, and a vast majority of the writers and executive producers on the show are also men. 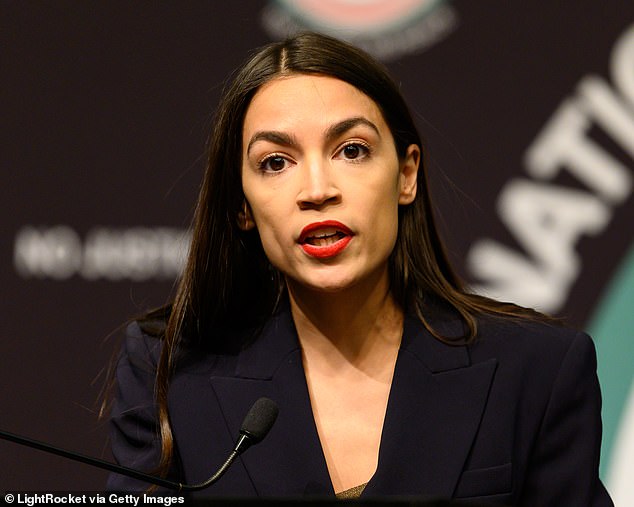 Ocasio-Cortez is a 29-year-old progressive representative. She rose to prominence last year when she beat 10-term Democratic incumbent congressman in New York Joe Crowley in the primary race for the 2018 midterm elections.

The self-declared Democratic socialist has not yet endorsed a presidential candidate for 2020, but she was an organizer for independent Vermont Senator Bernie Sanders’ 2016 campaign before she ran for the House.

Sanders is making his second consecutive bid for the party’s nomination to take on President Donald Trump.

Earlier this month, Ocasio-Cortez said she was ‘entertaining’ the idea of making a primary endorsement, and spoke positively of both Sanders and Warren.

She has said she is ‘very supportive of Bernie’s run,’ without issuing an all-out endorsement.

Sanders and Ocasio-Cortez co-introduced legislation two weeks ago that would cap credit card interest rates at 15 per cent, a drastic decrease from some interest rates that go upwards of 30 and 40 per cent.

There are 24 Democrats already running for for the party’s nomination, and Sanders and Warren are two of the most progressive candidates of the bunch.

Sanders is one of the most popular in the race, often ranking as second among likely registered Democratic voters, right behind former Vice President Joe Biden.