Chinese giant Huawei should not be banned from involvement in UK infrastructure despite spying fears, an official report claims.

The recommendation from the National Cyber Security Centre is said to have come after a review of ‘5G’ mobile technology and the potential risks it poses.

Huawei has faced a storm of controversy in recent months, with the United States suggesting its telecoms kit could be used by China to spy on western countries.

Huawei – whose research facility in Ottowa, Canada, is pictured last Thursday – has faced a storm of controversy in recent months

The company faces outright bans from being involved in the rollout of 5G networks in Australia, New Zealand and the US, with Canada and the UK still undecided on their approach. Huawei strongly denies claims its equipment can be used for spying.

And last night it was claimed British officials have also concluded any concerns about the firm can be allayed by beefing up safeguards.

The UK’s mobile and internet providers are already heavily reliant on Huawei for their networks, but the US has argued newer 5G networks are more complex and using the Chinese company’s kit poses an unacceptable risk.

But a source told the Financial Times the conclusion reached by British officials was likely to embolden European countries to follow its lead and defy America.

The source said: ‘Other nations can make the argument that if the British are confident of mitigation against national security threats then they can also reassure their publics and the US administration that they are acting in a prudent manner.’ 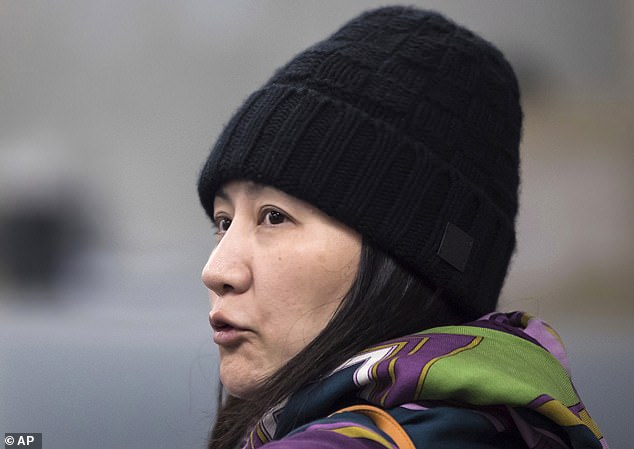 Huawei, along with another Chinese network equipment company ZTE Corp, has been accused by the US of working at the behest of the Chinese government.

What are the security concerns over Huawei?

Huawei is at the centre of concerns that its involvement in providing the infrastructure for telecoms services in the West, including the UK, will allow the Chinese to spy on businesses and individuals, or interrupt services, causing massive disruption.

The United States has taken steps to block the company’s equipment from mobile networks over security concerns, and Australia and New Zealand have barred the supplier from new 5G networks for the same reason.

BT is removing Huawei electronics from parts of its network amid fears of spying.

Earlier this month, the chief of Britain’s foreign intelligence service said Britain should avoid relying on a monopoly provider of equipment in new 5G mobile networks, but that there were no easy answers to concerns about using Huawei.

Huawei Chief Financial Officer Meng Wanzhou was arrested in Canada in December and faces possible extradition to the US.

Last month Ms Meng, who is the daughter of the Huawei founder, was charged with wire fraud that violated US sanctions on Iran.

While NCSC did not directly comment on the FT report, it reiterated earlier concerns about Huawei’s engineering and security capabilities.

A spokesman said: ‘As was made clear in July’s HCSEC (Huawei Cyber Security Evaluation Centre) oversight board, the NCSC has concerns around Huawei’s engineering and security capabilities.

‘We have set out the improvements we expect the company to make. The latest Annual HCSEC report will be published in the near future.’