A British conductor has been fired from his job directing a prestigious American music festival after being branded racist over a joke, his friend says.

Matthew Halls, who was educated and taught at Oxford, was hired in 2014 as artistic director at the Oregon Bach Festival which is run by the University of Oregon.

But he has now been fired after a joke he made with African American friend and singer Reginald Mobley was overheard by a white woman and reported as racist.

Mr Mobley, who is from Florida, has since spoken out to defend his friend, saying Mr Halls was ‘victimised’ and the jibe had nothing to do with race.

He told The Sunday Telegraph: ‘It was an innocent joke that has been entirely taken out of context.’

Mr Mobley told the paper that the incident took place back in July while the pair were talking following this year’s Bach Festival.

They began discussing a concert Mr Mobley had recently performed at in London, when the countertenor said he thought it had presented a rose-tinted vision of the pre-Civil War South.

Mr Halls had jokingly ‘apologised on behalf of England’ for the miscalculation, before asking ‘do you want some grits?’ in an exaggerated southern accent.

‘I’m from the deep south and Matthew often makes fun of the southern accent just as I often make fun of his British accent,’ Mr Mobley said.

‘Race was not an issue. He was imitating a southern accent, not putting on a black accent, and there was nothing racist or malicious about it.’ 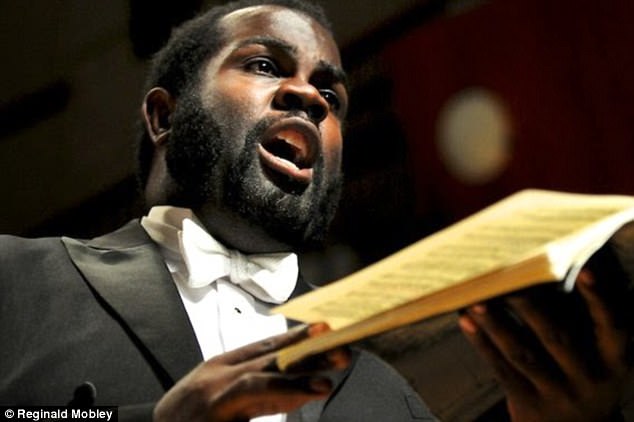 Friend Reginald Mobley says Halls was sacked for imitating a southern accent while speaking to him, which a white woman overheard and interpreted as racist

But the joke was overheard by a white woman who came and spoke to Mr Mobley about it afterwards, he said.

He believes she then reported the incident to the University of Oregon as racist, leading to Mr Halls being fired.

Mr Mobley said that while the woman’s intentions were in the right place, her actions went ‘too far’.

The university has refused to discuss the alleged incident, saying Mr Halls’ firing was due to the festival being restructured, the Register Guard reports.

But the same paper also revealed that Mr Halls was given a hefty pay rise and had his four-year contract extended by two years just weeks before he was sacked.

Mr Halls, who was due to work at the university until 2020, has not spoken about the incident since he was let go on August 27.

Mail Online has contacted Mr Halls’ representative for comment, but had received no response at the time of publication.