Britain slipped down the global broadband speed table, going from 34th place in 2019 to 47th this year – a result of a slow pure fibre network rollout, experts say.

The Worldwide Broadband Speed League gathers data from more than 570 million speed tests in 221 countries or territories around the world to create a comparison.

The 2020 table revealed that while the UK average speed had increased, from about 22 Megabits per second (Mbps) in 2019 to 37.82Mbps, its table place had dropped.

The UK has fallen 13 places because it hasn’t been able to increase its broadband speeds as fast as other places due to a slower fibre optic network rollout.

The top three spots in the table were all taken by small nations including Liechtenstein, Jersey and Andorra – all with more than 200Mpbs average speeds.

The 2020 table revealed that while the UK average speed had increased, from about 22 Megabits per second (Mbps) in 2019 to 37.82Mbps, its table place had dropped. Stock image

Pure fibre, also known as Fibre to the Premises, involves delivering broadband over fibre optic cables straight to the home or office.

In other types of fibre broadband delivery, the fibre goes to a location junction box and is then the internet is delivered to the home from there through copper cables.

Europe was the fastest region with a continent wide average speed of 81.9Mbps – that was more than three times the global average of 24.84Mbps.

According to Cable.co.uk, the company behind the research, the UK is ‘dwindling’ in 47th place due to the fact Openreach has been slow in rolling out pure fibre.

The UK still finds itself a long way behind many nations of equal or greater size.

‘Ultimately, the UK, specifically Openreach, is comparatively late in its rollout of pure fibre networks, which is causing the UK to stagnate, while other nations gain ground,’ according to Dan Howdle from Cable.co.uk.

Around 60 per cent of the UK has access to the Virgin Media network and can get speeds of up to 516Mbps, and there is limited availability of smaller networks such as Hyperoptic offering gigabit speeds, according to Cable.co.uk.

However, they said the Openreach network remains the anchor that keeps average speeds in the UK comparatively low.

Entry-level fibre packages and ‘fast’ fibre packages on Openreach have been set at around 30-35Mbps and 60-70Mbps respectively for more than five years now with no significant changes beyond how those speeds are advertised.

Catherine Colloms, MD for Corporate Affairs at Openreach said the UK has been prioritising delivering decent broadband to the vast majority of homes over superfast full fibre to a monitory of towns and cities.

‘Today though, we’re investing £12bn in the next big build and taking ultrafast, ultra-reliable full fibre broadband to 20m premises by the mid-to-late 2020s.’ 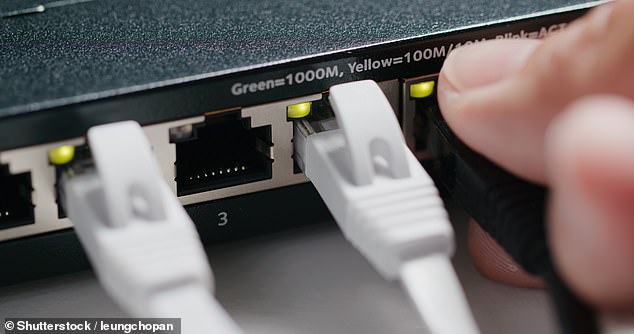 Colloms said data like this league table should be considered in more detail and look at the difference between current and available speeds.

‘Experts at Thinkbroadband have calculated that if everyone bought the fastest product available to them, the UK’s national average broadband speed would be a whopping 385Mbps.

‘That said, we’d always recommend considering a range of measures like pricing and quality of service – and not just speeds – when comparing the UK to other countries.’

Small territories have been able to more easily roll out full fibre to every home or office and Jersey was one of the first places in the world to make the switch.

Daragh McDermott, Managing Director of JT, the Jersey government owned telecom provider, said since completing their full fibre rollout – to replace all copper connections – they have quadrupled minimum speeds from 250Mbps to 1Gbps.

‘This ensures the best possible experience as more and more of us are working and schooling from our homes,’ McDermott told MailOnline.

‘We are extremely proud that our network is able to deliver some of the fastest speeds in the world and that we have been able to support our island communities during these challenging times.’

Howdle, a consumer telecoms analyst, said there was an increase divide between the ‘have and have nots’ of global broadband.

‘While global broadband speeds continue to trend upward, the truth is faster countries are the ones lifting the average, pulling away at speed and leaving the slowest to stagnate,’ he explained.

‘Last year, we measured the slowest five countries at 125 times slower than the five fastest. This year they are 276 times slower.

‘The slowest countries are not slowing, they are simply not growing. While the fastest countries continue to accelerate year-on-year.’ 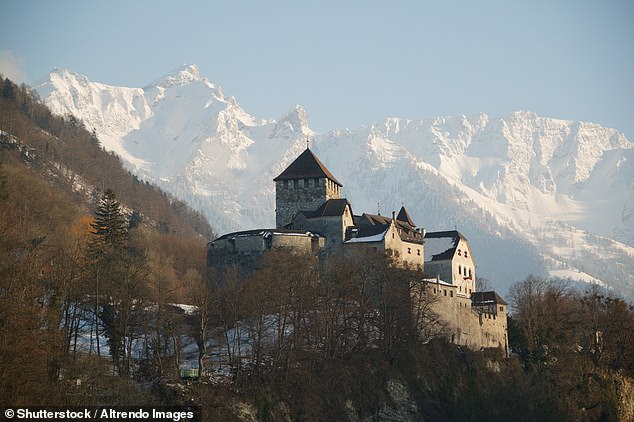 The top three spots in the table were all taken by small nations including Liechtenstein (pictured), Jersey and Andorra – all with more than 200Mpbs average speeds. Stock image 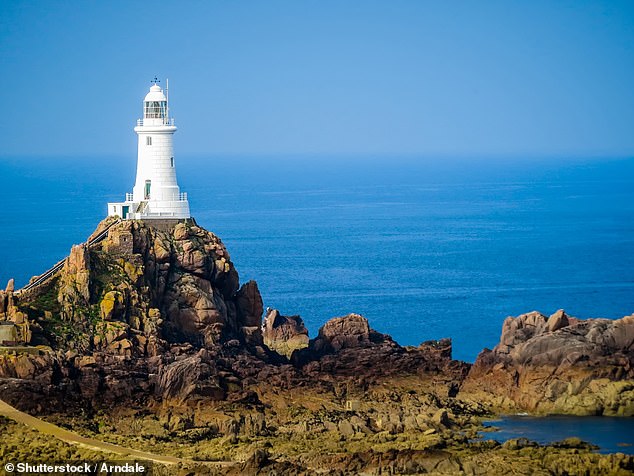 Small territories have been able to more easily roll out full fibre to every home or office and Jersey (pictured) was one of the first places in the world to make the switch. Stock image

He said that in all cases, those countries ranking highest are those with a strong focus on pure fibre networks.

Those nations that are ‘dawdling too much on pure fibre’ and sticking to ADSL solutions such as the UK are ‘slipping further down year-on-year’.

AVERAGE SPEED BY REGION: EUROPE COMES OUT ON TOP

Researchers from Cable.co.uk also managed to breakdown data region by region and found Western Europe came out on top of the table.

Hong Kong  at 105.32Mbps and Hungary with a speed of 99.74Mbps are the only two nations to make it into the top ten fastest in the world outside of Western Europe

Countries in Northern Africa collectively had the lowest average speed in the world  at just 3.80Mbps – with South Sudan the slowest at 580Kbps (0.58Mbps).

The research was designed and compiled by Cable.co.uk, and the data gathered by M-Lab, an open source project with a range of contributors including civil society organisations, educational institutions, and private sector companies.

The UK manages to trump 174 other countries, yet falls behind 46 others, coming in behind 21 Western European countries.

This puts the UK among the slowest in the region when it comes to average broadband speed, losing ground since the measurements were taken last year.

Liechtenstein tops the table at 229.98Mbps, with the small island of Jersey coming in second at 218.37Mbps.

‘Countries and territories with a heavier reliance on or ongoing investment in pure fibre networks, or are upgrading to fibre or LTE from even more aged technologies, continue to see their averages rise,’ said Howdle.

‘Those that are somewhat late to that particular party, however, the UK being a case in point when it comes to pure fibre networks, have slipped back.’

The researchers also looked at how long it takes to download a high definition movie of about 5GB in each of the countries listed. 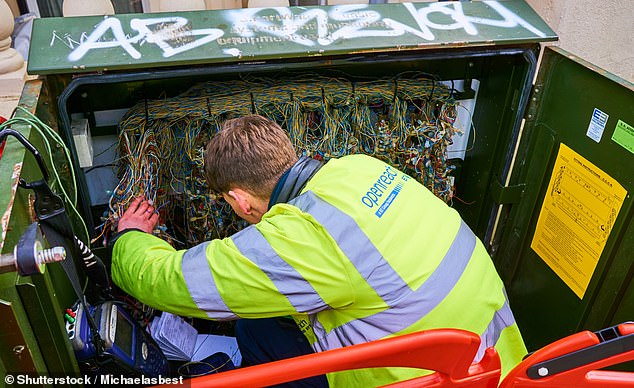 Researchers claim Openreach has been ‘too slow’ at rolling out its fibre optic broadband network to the home – which has left the UK dwindling in 47th place. Stock image

According to Howdle, it is much easier to upgrade to full pure fibre in a smaller jurisdiction such as Jersey or Andorra.

‘As shown by the domination of smaller countries and regions at the top of the table – Liechtenstein, Jersey, Andorra, Gibraltar – it is obviously far easier to upgrade a country or territory to full fibre the smaller it happens to be,’ he said.

The sample size of nations in 2020 was 109 per cent larger than last year, according to Cable.co.uk, who say this is due to the tools they use in the study becoming more widely used.

Speaking of the UK dropping 13 places, a DCMS spokesperson said they’re  were determined to connect all of Britain with a faster broadband network.

‘We have spent £2 billion connecting more than 96 per cent of the country with superfast speeds and are now focused on delivery of even quicker gigabit-capable broadband, mainly through full fibre to homes,’ they said.

‘More than 7.5 million properties can already access gigabit-capable broadband as a result of government and industry investment, with more people connected every week.

‘We’re supporting the telecoms industry’s plans to deliver gigabit speeds to 80 per cent of the UK by 2025 and investing a further £5 billion so that the hardest-to-reach 20 per cent isn’t left behind.’