The heat of summer has not even arrived yet but already the UK is well on track for another record-breaking year of fires.

This is the warning from NASA scientists who have been monitoring the appearance of blazes across Britain over the last five years.

Since 2017, the number of UK fires detected from space has been increasing – thanks to increasingly warm and dry weather conditions that encourage blazes.

There have already been more fires in the UK so far this year than had occurred by the same point back in 2018.

NASA and the NOAA have been monitoring global wildfires from space since 2014. Each of the red dots on this map of the UK represents the location of a fire detected by the orbiting Suomi NPP satellite between January 1 and April 30 this year

NASA, in tandem with the US National Oceanic and Atmospheric Administration, has been monitoring global wildfires from space since 2014.

The Visible Infrared Imaging Radiometer Suite (VIIIRS) on-board the Suomi NPP satellite has been tasked with looking out for fires.

Each of the red dots on the map of the UK above represents the location of a fire detected by the orbiting satellite between January 1 and April 30 this year.

However, a single fire can be detected repeatedly by the satellite if it burns over more than one day.

Hundreds of fires have been detected across the UK this year to date, with more certain to follow.

Using the satellite data, researchers are also able to examine the rate at which fires appear to have been igniting over time.

The data shows a seasonal tend in the frequency of fire detections, with more blazes spotted by the satellite in the spring and summer months.

At these times, NASA said, vegetation that had been frozen and dried during the winter months becomes fuel for wildfires.

The data shows a seasonal tend in the frequency of fire detections, with more blazes spotted by the satellite in the spring and summer months

WHY DID FEBRUARY 2018 SEE SO MANY WILDFIRES IN THE UK?

Warm sunshine has dried out Britain’s uplands to the extent that emergency services have already had to tackle a spate of fires.

Normally in February, moorland in areas such as the Pennines and North Wales is soaking wet and boggy.

But grass, gorse and heather have dried out due to a lack of rain in the last fortnight.

Grass fires can develop quickly in dry conditions and raised winds with the possibility of quickly spreading.

They are often caused deliberately by people, but can also happen when controlled fires get out of hand.

When road access is not possible to fight them, then they are often left to burn themselves out.

The number of fires detected in the UK has also been increasing since 2017.

This is due to an rise in warm and dry weather conditions across the UK in both 2017 and 2018, the European Commission’s Joint Research Center has said.

This broad trend looks set to continue, with the UK having already experienced more wildfires by the end of April 2019 than it had at the same point in 2018, which was a record-breaking year in its own right.

‘Drier-than-normal conditions can boost fire detections in two ways,’ said Wilfrid Schroeder, an expert in the remote sensing of fires, based at the University of Maryland, who is the chief researcher for the VIIRS active fire detection system.

Dr Schroeder added that there also tends to be less cloud coverage when it is dry, which makes blazes easier for the satellite to spot from space. 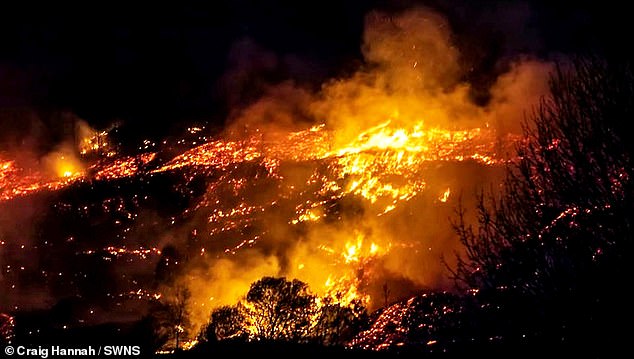 The number of fires detected has also been increased since 2017. Pictured: fire ravages the landscape of Uppermill, near Saddleworth, in February 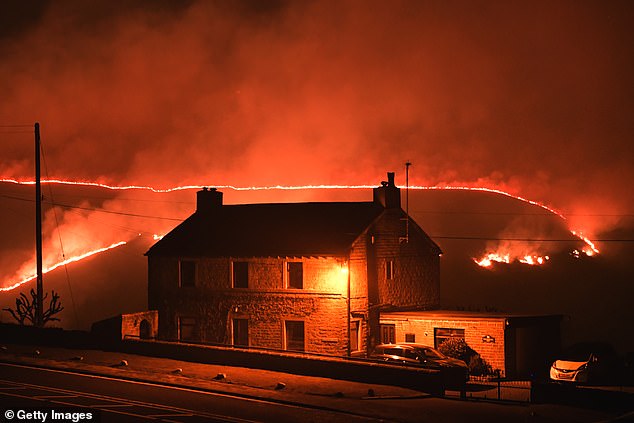 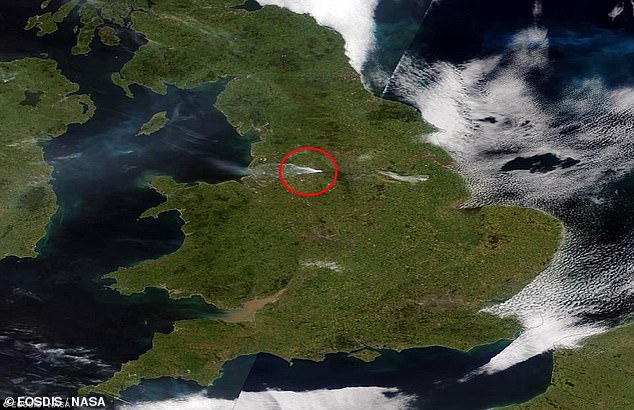 Among this year’s conflagrations to date have been blazes igniting in both February and April in the Ashdown Forest, the inspiration for Winnie the Pooh’s home of the Hundred Acre Wood in the books of A.A. Milne.

Up in the north, Scotland has also seen its share of ignitions, including a major wildfire adjacent to a wind farm in Moray.

Fires can have devastating impacts on both the environment and animal life — and the blazes can be extremely difficult to fight once they get going.

Last year, for example, wildfires on Saddleworth Moor raged for days, forcing the emergency services to call in both the army and the Royal Air Force to assist in tacking the infernos.

In the dramatic footage below, local farmer James Crowther, 30, accompanied by friends, family and sheepdogs, braved the burning landscape on quad bikes to evacuate his 3,000 livestock to safe ground. 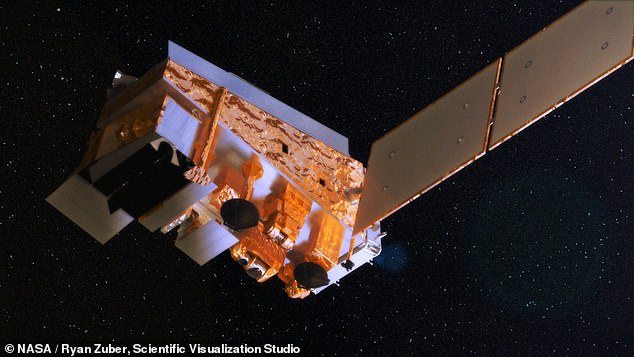 NASA, in tandem with the US National Oceanic and Atmospheric Administration, has been monitoring global wildfires from space using the Visible Infrared Imaging Radiometer Suite on-board the Suomi NPP satellite (pictured, artist’s impression)

Britain experienced an extraordinary few days of record-breaking temperatures back in February.

The exceptionally warm weather was thanks to a block weather pattern which is dragging up warm air from the Canary Islands, Morocco and southern Spain.

The pattern is a large area of high pressure that moves in a clockwise direction bringing warm winds from the Canaries, meaning more sunlight.

The dry ground needs less energy to heat up and so it is becoming hotter more easily – which makes it very warm when combined with the southern air flow.

Conditions in Wales – which recorded temperatures above 20°C (68°F) two days in a row – were supercharged by the ‘Foehn Effect’ phenomenon.

This is where moist air dries out as it hits hills or mountains, allowing temperatures to rise further as the air comes down the other side.

Scientists say that the variability of weather makes it hard to link any single event to climate change, but global warming is heating up the whole system and making extremes more likely.

Those conditions, at the very end of winter, come against a backdrop of 1C of warming since pre-industrial times as a result of human activity, helping lead to record temperatures for the time of year.

‘Climate change has made what would have already been an extremely warm event even warmer and is probably responsible for tipping it over the 20C threshold,’ he said.

Dr Jo House, from the University of Bristol, said: ‘Weather is always variable so it is hard to link a single event to climate change. What we do know is that climate change is warming the whole system and makes events like these more likely to happen.’

Bob Ward, policy and communications director at the Grantham Research Institute on Climate Change and the Environment at the London School of Economics and Political Science, said: the ‘record for the UK’s winter temperature is consistent with the clear climate change signal that we are seeing in the UK.’

In Thessaloniki in Greece, it hovered at around 3C (37F) and the area even had snow, as did parts of Northwest Turkey that also saw wintery flurries.

The culprits were areas of low pressure over the Atlantic and Eastern Europe, trapping warm air over the northwest of the continent.