UK GDP fell by almost three per cent in January, reversing a mini-bounce back recorded in December, as the latest national coronavirus lockdown hit the economy hard.

New figures published this morning by the Office for National Statistics showed that GDP plunged by 2.9 per cent in the first month of the year.

The contraction came after statistics showed the economy had grown by an estimated 1.2 per cent in December.

January’s overall GDP figure is nine per cent below the level recorded in February last year, before the pandemic took hold.

It is also still four per cent below the level recorded in October – the initial peak of the recovery after rules were eased over the summer.

The ONS data showed that all main sectors of GDP remained notably below their pre-pandemic levels and all were lower than in October 2020.

UK GDP fell by an estimated 2.9 per cent in January this year as the latest lockdown hit the economy hard 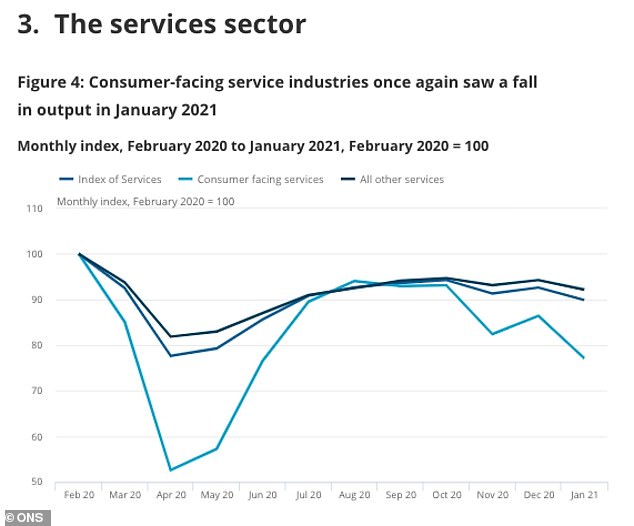 The services sector of the economy was particularly badly hit by the latest wave of national restrictions which were imposed by Boris Johnson at the start of January.

The ONS said the sector had acted as the ‘main drag’ on growth in January, decreasing by 3.5 per cent.

Meanwhile, the production sector suffered a fall of 1.5 per cent in January following eight months of consecutive growth.

The sector was five per cent below the level recorded in February last year.

The construction sector did record positive growth of 0.9 per cent in January after suffering a decline of 2.9 per cent in December.

However, the construction sector was still 2.6 per cent below the level recorded in February last year.

Deputy national statistician for economic statistics Jonathan Athow said: ‘The economy took a notable hit in January, albeit smaller than some expected, with retail, restaurants, schools and hairdressers all affected by the latest lockdown.

‘However, increases in health services from both vaccine rollout and increased testing partially offset the declines in other industries.’

Office for Budget Responsibility (OBR) forecasts have GDP dropping 3.8 per cent in the first quarter before bouncing back by 3.9 per cent in the second quarter, if the Government’s vaccination rollout and road map reopening goes to plan.

Anneliese Dodds, Labour’s shadow chancellor, said: ‘Today’s figures confirm that under the Conservatives we’ve had the worst economic crisis of any major economy.

‘Rather than securing the recovery, Rishi Sunak’s budget last week risked weakening it through a combination of pay cuts and tax rises, and a looming cut to social security just as unemployment is set to spike. 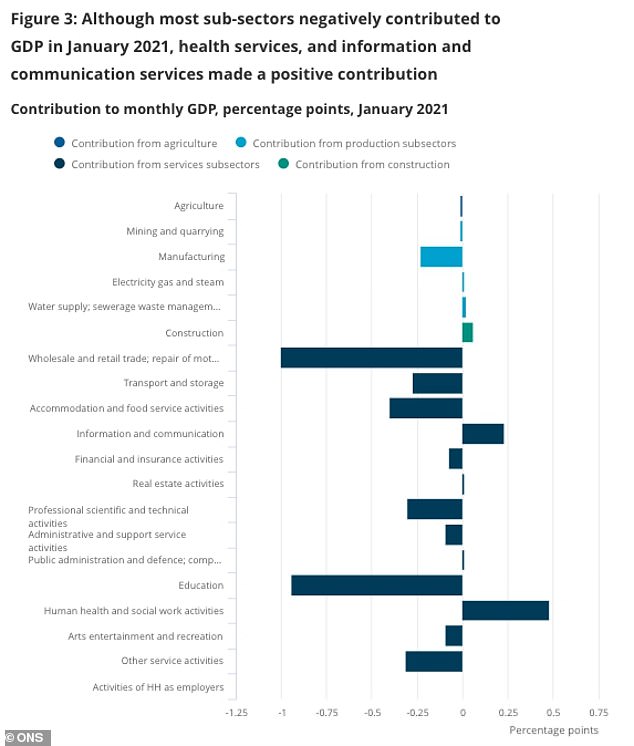 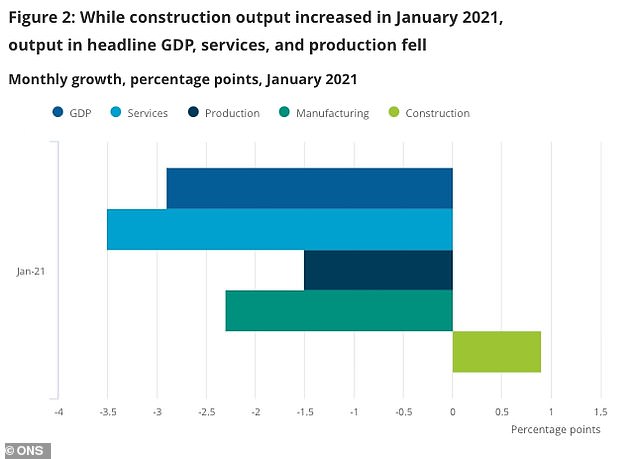 ‘The Chancellor’s mask has slipped. He’s making irresponsible choices now and has no long-term plan for the future. The people of Britain deserve better.’

Suren Thiru, the head of economics at the British Chambers of Commerce, said: ‘The latest data confirms a better than expected start to the year for the UK economy as the third lockdown and post-Brexit border disruption combined to trigger only a relatively modest decline in economic activity in January.

‘The vaccine rollout and budget stimulus will boost output as restrictions ease. However, the lingering economic effects of covid, including elevated consumer and business debt levels, may severely limit the pace of any recovery.

‘Despite a number of welcome announcements in the budget, there are still many businesses and individuals who have, through no fault of their own, been excluded from government support.

‘Many will require help if they are to navigate a difficult few months ahead before the economy is able to fully reopen.’

Alpesh Paleja, lead economist at the Confederation of British Industry (CBI), said: ‘Activity fell in January, as widely expected, with much of the UK entering some form of lockdown at the start of the year.

‘However, the decline was notably smaller than the first lockdown in spring 2020, demonstrating the growing ability of businesses and households to adapt to greater restrictions on mobility.’