UK house prices fell slightly last month in a further sign that the property market is cooling down as affordability is becoming an issue, especially for Britons in the South of England.

According to the latest figures from Nationwide the price of the average home in the UK edged down 0.1 per cent in August to £210,495 after a couple of months of rises, matching May’s performance, which was the lowest since the Brexit vote.

Year-on-year growth also moderated to 2.1 per cent from 2.9 per cent in July, which is about half the pace of growth seen 12 months ago.

London homes: Nationwide found that first time buyers in London and nearby areas were stretching themselves.

Robert Gardner, Nationwide’s chief economist, said it was possible that mounting pressure on household finances was exerting a drag on the property market, especially in London and the South.

He added: ‘Wages have been failing to keep up with the cost of living in recent months and consumer sentiment has weakened.

‘While measures of housing affordability are not particularly stretched at a UK level, pressures are evident in some regions – especially London and the South of England.’

Nationwide found that first time buyers in London and nearby areas were stretching themselves, with mortgage payments making up almost 60 per cent of their take home pay – a proportion very close to the 2007 peak just before the financial crash.

Homebuyers in London and the South East have been the most hit by higher stamp duty than the rest of the country since a progressive system of taxation – according to which higher valued properties pay a greater share of total tax than before – was introduced last year. That’s because homes in these regions are highly priced.

Gardner said: ‘London and the South East are likely to be paying an even greater proportion of SDLT than under the old “slab” system, compounding the impact of stronger house price growth in these regions in recent years.’ 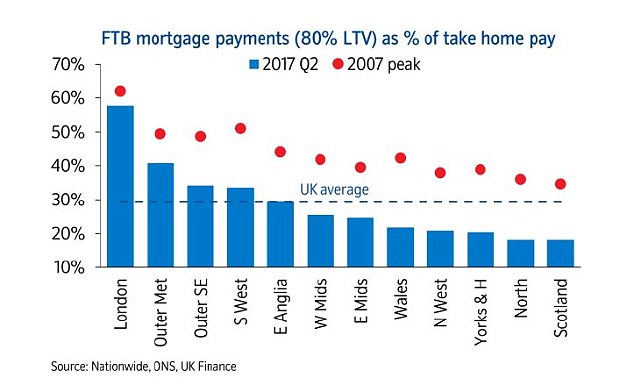 Stretched affordability: Pressures are evident in London and the South of England

In fact, those regions have been the ones to contribute most to stamp duty revenues, which Nationwide found have reached an all-time high in cash terms in recent quarters. They reached £12.8billion in the twelve months to the second quarter this year, well above £10.6billion recorded in late 2007, Nationwide said.

That’s despite property transactions actually being 30 per cent below than the same period in 2007.

Gardner said the rise in stamp duty revenues was down to both the introduction of a 3 per cent stamp duty on second homes but also on higher house prices. 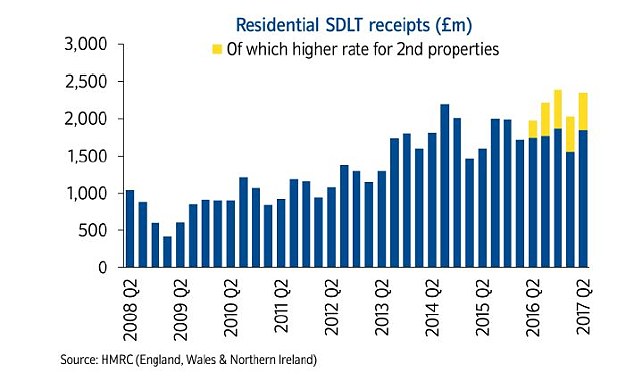 Higher stamp duty revenues: the increase is down to the introduction of a 3 per cent stamp duty on second homes and higher house prices

‘This is important because these regions contribute significantly more than their par share of stamp duty revenues as house prices are well above the UK average,’ Gardner said.

He added: ‘For example, in 2007, London and the Outer Metropolitan regions accounted for 25% of housing transactions, but an estimated 50% of total stamp duty revenues (in England & Wales).’

Jonathan Samuels, chief executive of property lender Octane Capital, said that it is no surprise that the property market is cooling, since people are feeling the pinch.

‘Despite the strength of the jobs market and the record low mortgage rates available, the cooling of the property market is no paradox when you factor in the impact of rising inflation, low wage growth and ongoing consumer uncertainty around the longer term impact of Brexit,’ he said.

And added: ‘But the property market can only cool so much given the ongoing lack of supply. When there are so few properties for sale and being built, prices can only go so low.’