Britons are increasingly putting their home buying or moving plans on hold and stashing their cash in fixed term savings as the cost of living crisis bites, new data has revealed.

Net mortgage borrowing by individuals fell from £5.9billion in September to £4billion in October, according to the latest Bank of England figures.

Mortgage approvals for house purchases also fell by more than 10 per cent to 59,000 in October, down from 66,000 in September, suggesting homebuying appetite is dissipating amid rising mortgage rates.

The figures show the effects of the mini-Budget published by Liz Truss’ Government on 23 September, which spooked the markets with unfunded tax cuts – which have now largely been reversed – and led to a spike in mortgage rates.

Appetite waning? The number of mortgages approved in October fell more than 10% compared to September, as the cost of borrowing to buy a home went up

Andrew Codling, chief executive of the property platform, Twindig said: ‘Mortgage approvals plummeted in October as the mini-Budget wreaked havoc on the housing market, taking mortgage approvals to their lowest level since June 2020.

The dampening of mortgage demand appears to be linked to rising interest rates.

The ‘effective’ interest rate – the actual interest rate paid – on newly drawn mortgages increased by 25 basis points to 3.09 per cent in October, according to the Bank of England.

However, many homebuyers will have been confronted the prospect of far higher rates over recent weeks. The average two-year fixed rate mortgage is currently 6.08 per cent, according to Moneyfacts.

The reason the Bank of England average is lower is that fixed mortgage rates can be agreed up to six months in advance.

Steve Seal, chief executive of Bluestone Mortgages said: ‘The aftermath of the mini-Budget continues to take its toll, with a further drop-off in lending activity.

‘While lenders are re-entering the mortgage market after extreme swap rate volatility, there are still strong headwinds lying ahead, which will undoubtedly have an enormous impact on the homeownership dream.’

The prospect of falling house prices may also be preventing people from buying a home right now.

It is a particular concern for first-time buyers, as they often buy with small deposits and are at greater risk of negative equity if the value of their property goes down. 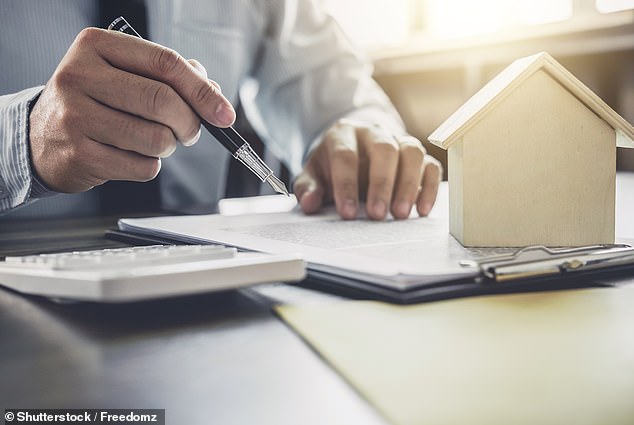 Past their peak: Mortgage rates have been falling from their October highs in recent weeks

But despite the Bank of England’s figures, there are at least signs that mortgage rates are falling from their recent peaks.

‘With the markets reassured on fiscal stability after the Autumn Statement and given the Bank of England’s gloomy recession forecast earlier this month, the Bank is now expected to raise interest rates from the current level of 3 per cent to around 4.25 per cent to 4.5 per cent – a slightly more palatable peak than the 6 per cent or more that had been feared after the Kwarteng mini-Budget.

‘With the number of mortgage products available also recovering, it means banks are competing for new customers once again – increasing the chances for new buyers and those looking to refinance of securing a better deal.’

Whilst mortgage appetite is falling, Britons who can afford it continue to pour much of their spare cash into savings.

Households deposited an additional £6.2billion with banks and building societies in October, according to the Bank of England.

Fixed rate savings appeared to be the flavour of the month, with £11.3billion stashed into these accounts, up from just £2.9 billion in September.

Fixed rate savings deals typically allow savers to lock their money away for between one and five years in return for higher rates.

The flood of money into fixed rate savings was however partly offset by the fact that money in easy-access savings accounts fell by £4.8billion overall.

Some of this money may have been transferred into fixed rate accounts, but it could also show Britons dipping into savings to cope with the rising cost of living.

Savings rates have been rising to the highest levels seen in more than a decade.

The typical interest rate paid to Britons stashing cash in new fixed rate accounts with banks and building societies rose to 3.26 per cent in October, up from 2.49 per cent in September.

The best fixed rate deals breached the 5 per cent barrier last month. However, in recent weeks they have been falling back.

Sarah Coles, senior personal finance analyst at investment platform Hargreaves Lansdown said: ‘There was a fixed rate savings frenzy in October, as £11.3billion piled into these accounts – a record high.