Britain today recorded 15 more coronavirus deaths in the preliminary toll — taking the official number of victims to 45,327, as separate figures reveal more people are now dying from the flu than Covid-19.

The preliminary figure is calculated by adding up coronavirus deaths across the UK, but it only takes into account fatalities in hospitals in England.

The Government has yet to confirm the final daily figure, which is usually higher because it looks at all Covid-19-positive victims in the community and care homes.

All 15 new victims died after testing positive for the virus in hospitals across England, while Scotland, Northern Ireland and Wales announced no new fatalities.

For comparison, just 11 deaths were recorded across the UK yesterday – but counts on Mondays are always lower because of a recording lag at weekends so there was a fear that daily deaths could rise quite significantly again today.

Separate figures released today show the number of people dying from Covid-19 is now the lowest since a fortnight before lockdown and nearly three times as many people are being killed by flu and pneumonia.

Data shows 283 people died from the coronavirus in England and Wales in the week ending July 10 — down from 418 a week earlier and from 8,000 at the peak of the crisis in early April.

It is the lowest figure since the week ending March 13, 10 days before Prime Minister Boris Johnson announced the draconian measures to curb the spread of the virus.

For comparison, 917 influenza and pneumonia deaths were registered in the same week. The number of Covid-19 deaths registered — a different measure to occurrences — in the same time-frame was 366.

Most recent data from the Office for National Statistics (ONS) also show the number of fatalities has fallen in all regions of England and Wales as the virus continues to peter out in the UK.

And deaths of any cause are now the lowest they have been all year, with promising statistics showing the number of fatalities has been below average for the past four weeks in a row.

ONS experts explained that Covid-19 likely sped up the deaths of people who would have died of other causes, meaning the year’s fatalities have been front-loaded.

As a result, fewer people are now dying of causes such as heart disease and dementia because they have already succumbed to the coronavirus.

Separate data last week showed that infection levels in the UK have stabilised and scientists suggest the death rate may fall because of warmer weather.

There are concerns, however, that the virus could return and cause more death and disease in the winter when people are more susceptible. 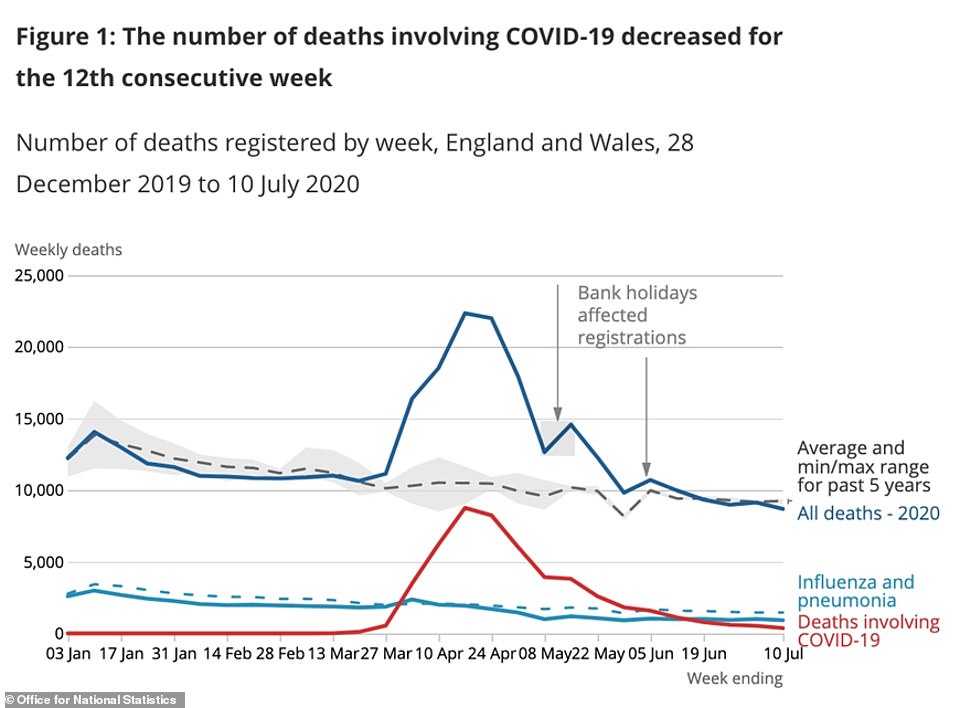 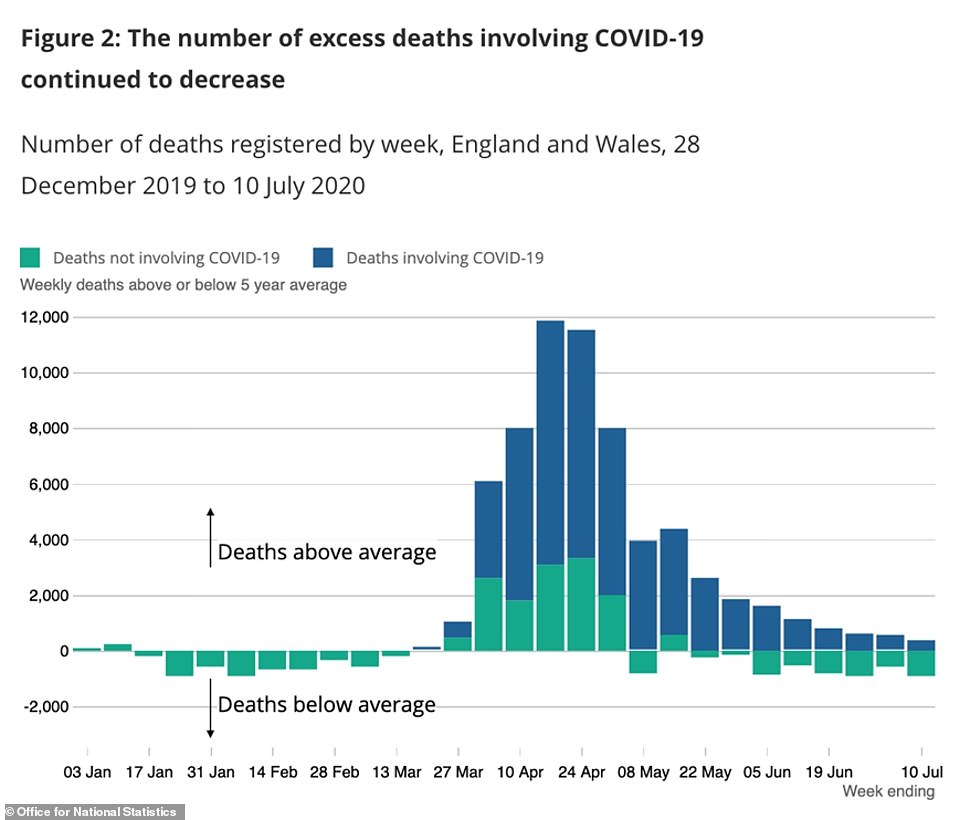 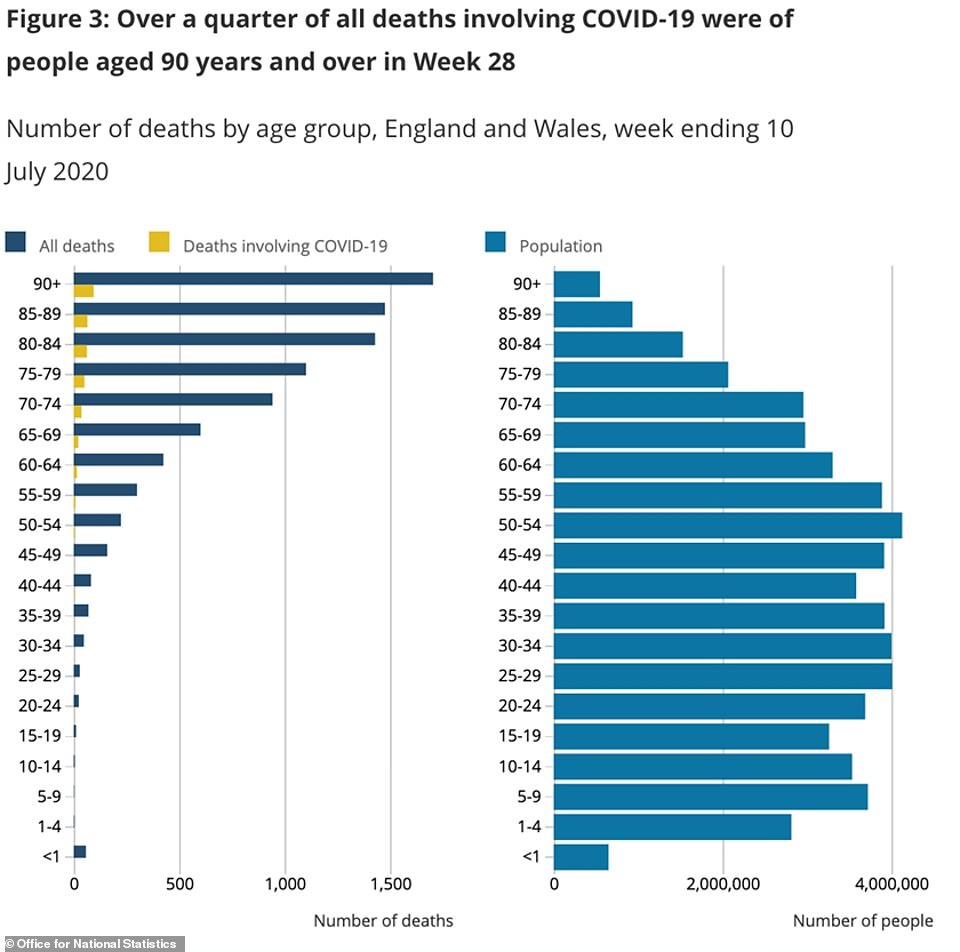 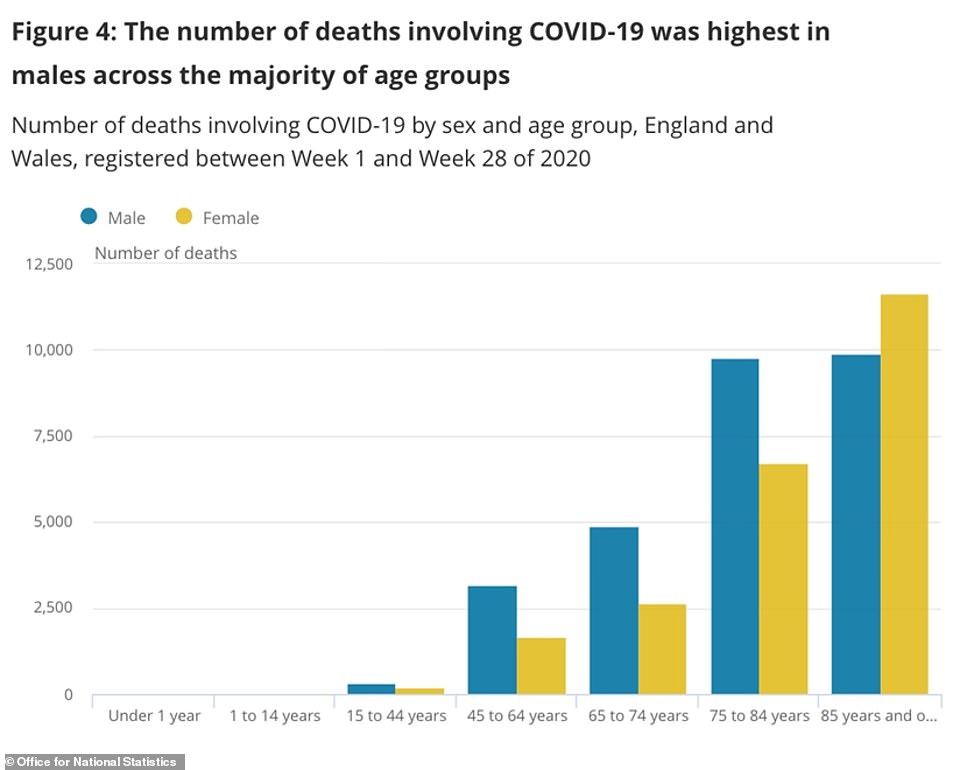 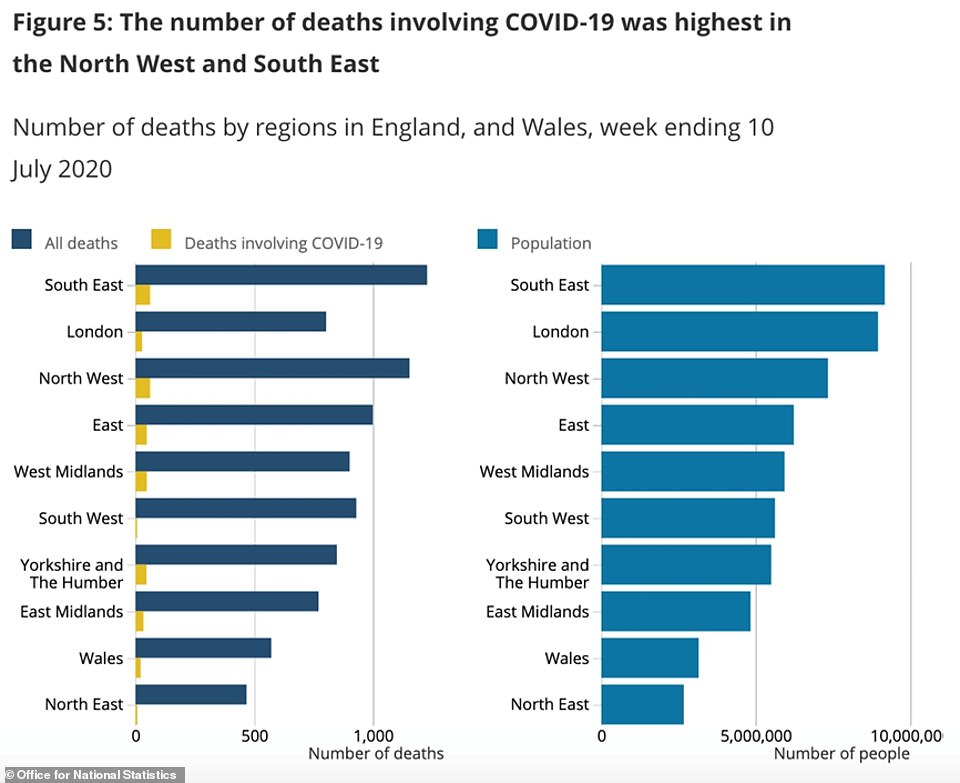 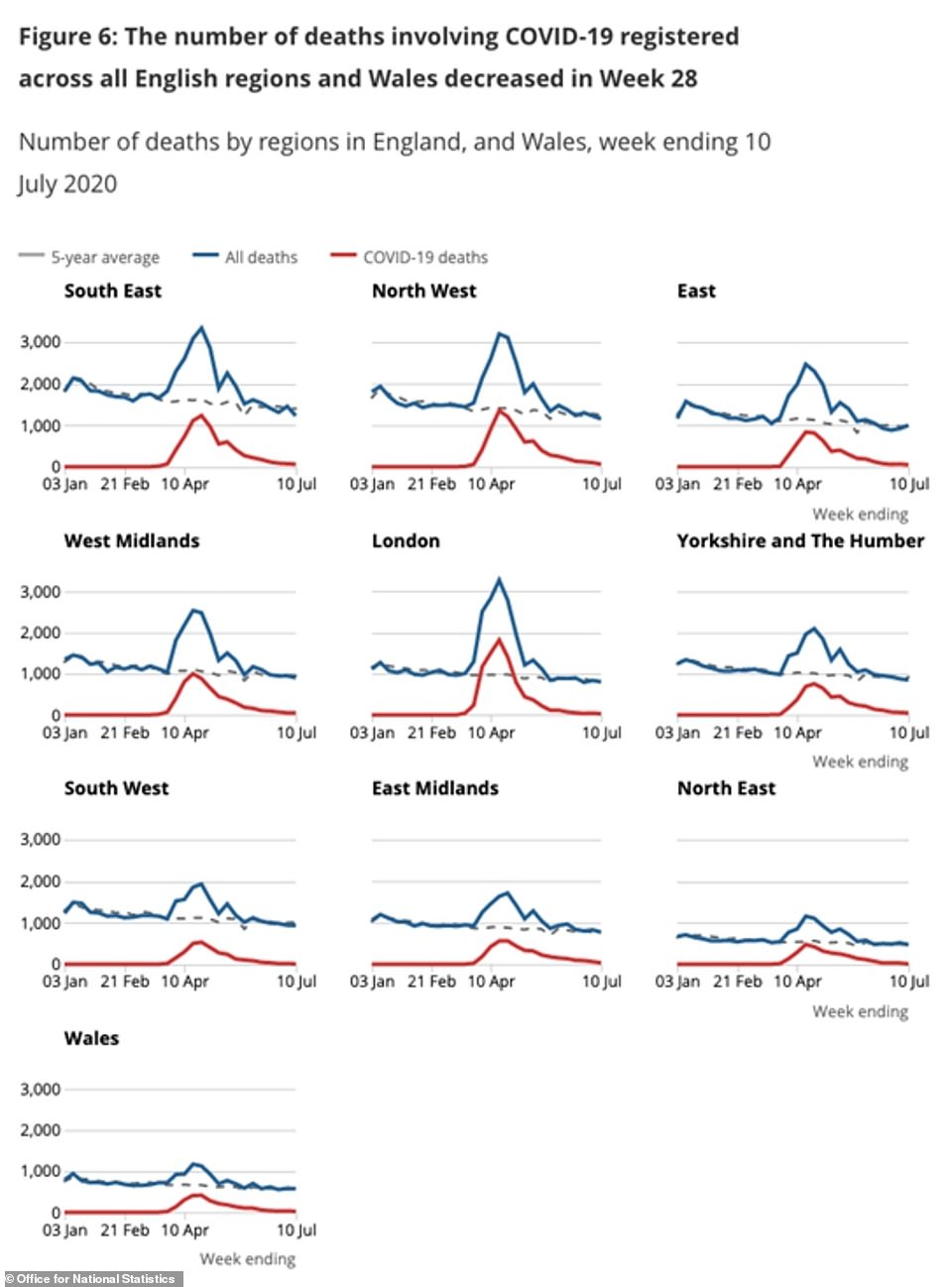 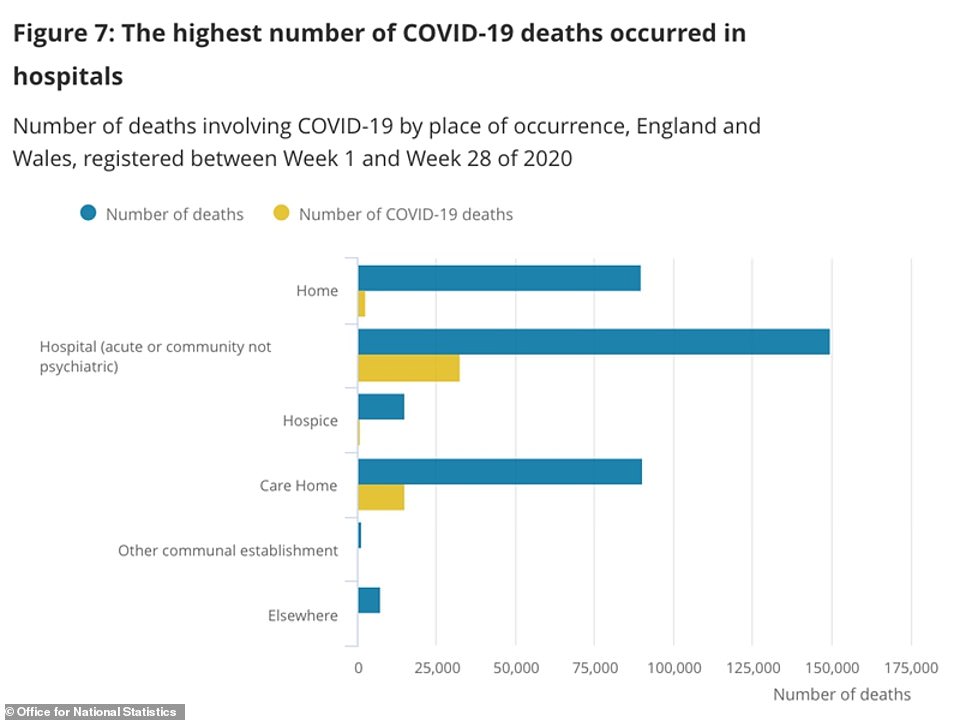 Professor Carl Heneghan, director of the Centre for Evidence-Based Medicine at Oxford University, said: ‘The last four weeks have seen fewer deaths than the five-year average.

‘This significant trend in reducing deaths compared to the average is likely due to deaths occurring a few months earlier in the frail and the elderly from Covid-19.

Professor Heneghan, an epidemiologist and expert in evidence-based medicine, added: ‘It will be essential to observe over these weeks whether this trend continues.’

This is the fourth week in a row that registered deaths — which relate to when they are recorded as opposed to when they occurred — have been below the five-year average.

Of the deaths registered in England and Wales in the week ending July 10, 366 mentioned Covid-19 on the death certificate.

It comes amid fears Britain’s coronavirus outbreak may be growing after figures yesterday revealed the average number of daily cases had risen for the fourth day in a row for the first time since April.

Department of Health bosses posted 580 more Covid-19 cases — taking the rolling seven-day mean of infections to 628 after the rate dropped to a four-month low of 546 on July 8.

Government statistics showed the last time the average rose for at least four days in a row was on April 11, when the number of infections began to slow down before plummeting at the end of May and in June.

But it takes patients weeks to die from Covid-19, on average, meaning officials can’t rule out a blip in the figures or confirm the outbreak has worsened since ‘Super Saturday’ for at least another week.

And hospital admissions — another indicator tracking the crisis — have yet to spike despite fears of an inevitable surge prompted by millions of people flocking to pubs to enjoy their freedom on July 4.

Number 10’s scientific advisory panel last week admitted the outbreak is shrinking at a slightly slower speed and separate official figures suggested up to 2,000 people were still getting infected each day in England alone. 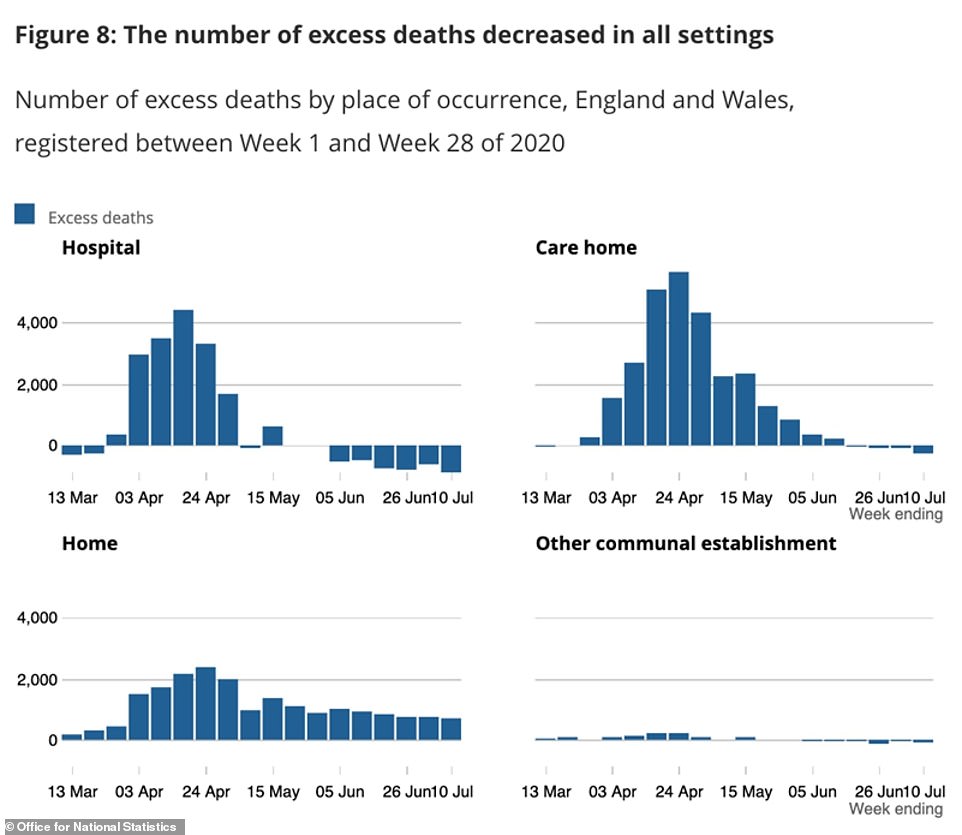 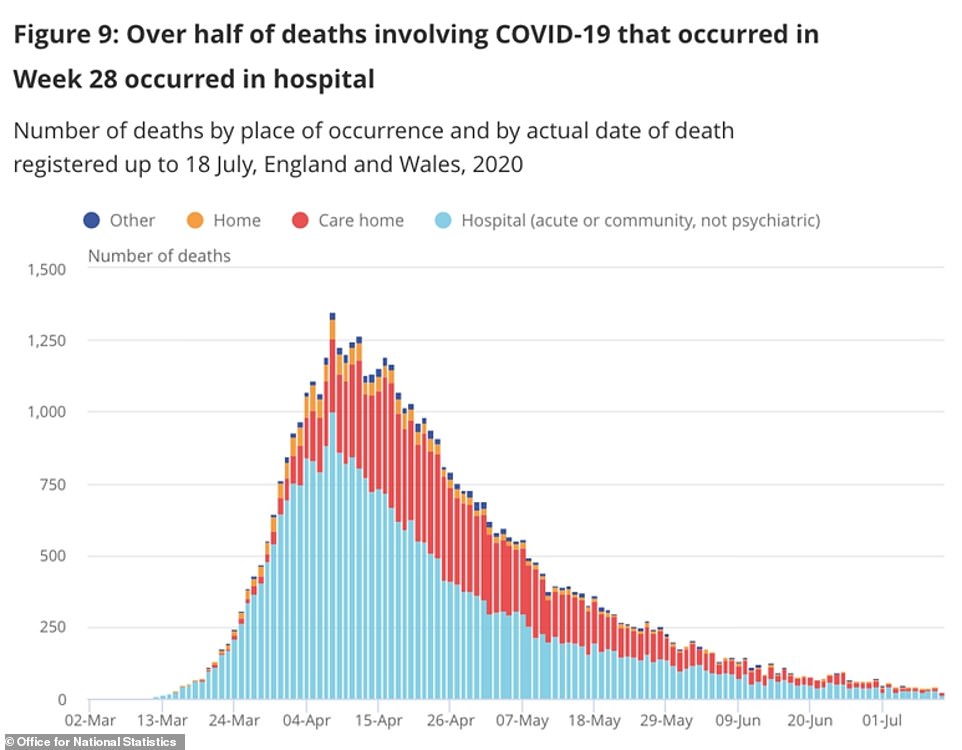 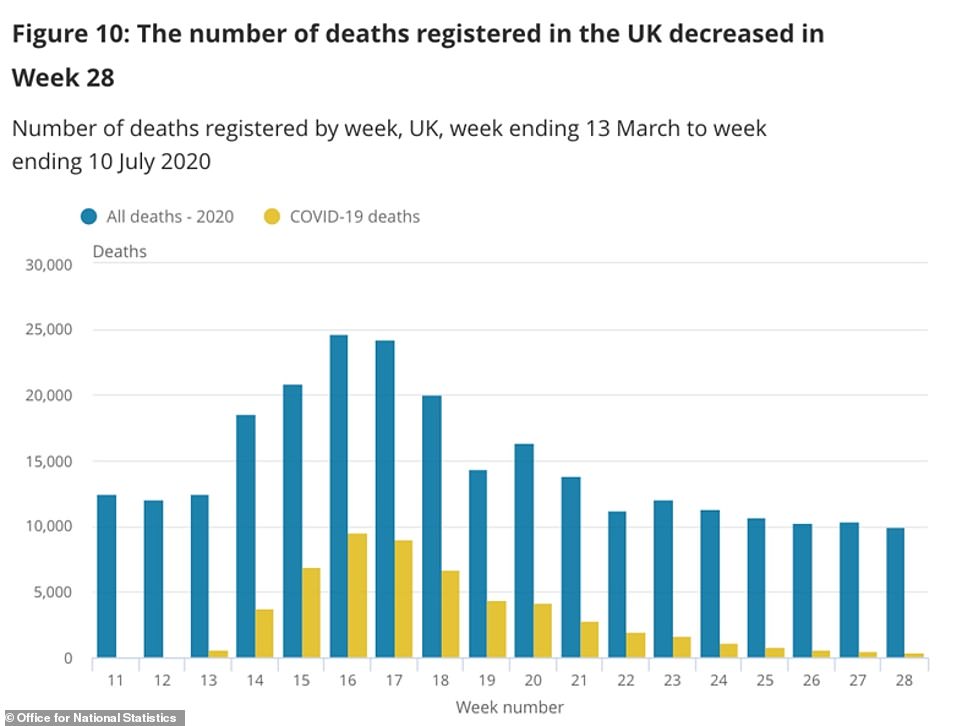 WHICH AUTHORITIES IN ENGLAND AND WALES HAVE HAD THE MOST COVID-19 DEATHS?

DEATHS IN ALL SETTINGS

AND WHICH PARTS OF THE TWO NATIONS HAVE RECORDED THE FEWEST FATALITIES?

DEATHS IN ALL SETTINGS