Bashar al-Assad will remain in power in Syria because the West no longer has any leverage to get rid of him, the British government believes.

The admission came as it emerged that many children have died in the latest wave of bombing and shelling by the dictator’s forces.

Five were reportedly killed in one incident as they stood by a school gate.

Theresa May and her ministers had repeatedly insisted that Assad must go and there was no future for his barbaric regime.

But eight years into the civil war it has emerged that the Government has decided to adopt what is considered to be a more realistic approach.

In a dramatic policy shift, the UK now accepts Assad will stay in place as long as Russia and Iran want him to. In the long term, Britain cannot see the leader – who has used chemical weapons against his people – providing stability, and ultimately thinks it is up to the Syrian people to decide their future.

However, this is not the view held by one of Syria’s most powerful neighbours, Turkey.

In a rare briefing in London yesterday, Dr Mehdi Eker who is responsible for foreign affairs for Turkey’s ruling AK party, said his country still believed that President Assad must go now. He told the Daily Mail: ‘That is our idea from the beginning, but the problem is the international community does not agree with us.’

‘We know that the regime is somehow backed by Iran [and] Russia but we believe the Assad regime is not sustainable.’

Sir Malcolm Rifkind, the former foreign secretary, said: ‘It is in the interests of the people of Syria that he goes but he is not going to go anytime soon.

‘You can only remove him by force and I don’t think anyone is saying the UK should send its armed forces to get rid of him.’ 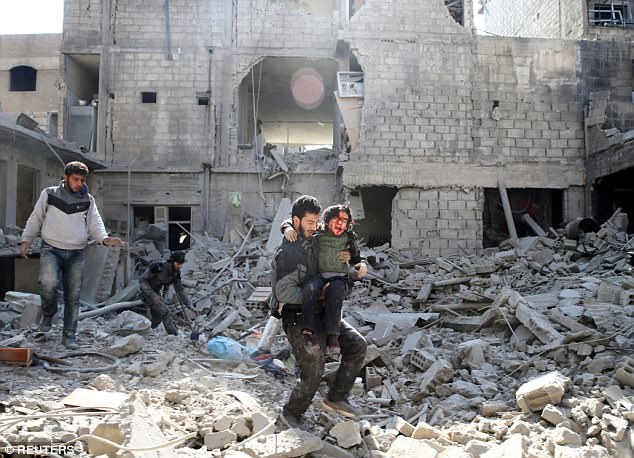 A man carries an injured boy as he walks on rubble of damaged buildings in the rebel held besieged town of Hamouriyeh, eastern Ghouta

Discussions around the future of Assad came as pro-regime forces – backed by Russia – continued their indiscriminate assault on rebel-held eastern Ghouta near Damascus. Residents of the enclave have said they are waiting for their ‘turn to die’, while a doctor in the district has described the situation as ‘catastrophic’.

Intense shelling and air strikes on eastern Ghouta have killed at least 260 people since Sunday.Many children are among the victims of the latest attacks. Save the Children said at least five schools had been hit by shelling this month, including a nursery, and many have been forced into hiding in underground bunkers.

Sonia Khush, an official with Save the Children, said: ‘The bombing has been relentless, and children are dying by the hour. These families have nowhere left to run – they are boxed in and being pounded day and night.’ Britain’s minister for the Middle East, Alistair Burt, said millions of Syrians needed help from this country ‘now more than ever’.

He said at the launch of a report by aid organisation Mercy Corps detailing the scale of the suffering in the country: ‘Millions of innocent Syrian men, women and children rely on UK aid and they need our help now more than ever.

‘That’s why we are providing emergency clean water to hundreds of thousands of people that have fled the violence in Idlib [in northern Syria] to help keep them alive and stop the spread of deadly and preventable diseases.

‘But aid alone is not enough. All parties must stop the bloody violence, protect civilians, respect international law and allow immediate and unhindered access for much needed aid convoys.’ 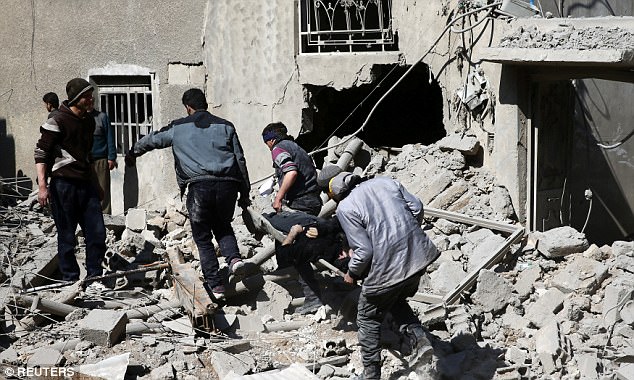 The Department for International Development will today pledge a further £15million in aid money to provide water to 575,000 citizens in Idlib.

The Mercy Corps report, titled The Wages of War, stated: ‘The scale of death and suffering in Syria is monumental.

‘What began as a peaceful protest in 2011 has spiralled into a humanitarian crisis unprecedented for our modern times.’

Prime Minister Theresa May said she was ‘appalled’ by the escalation of bombing by Assad’s forces.

She said: ‘It’s not just about the Syrian government … we call on all their backers, including Russia, to ensure that this violence stops.’

In Geneva, the UN children’s fund issued a blank ‘statement’ earlier this week to express its outrage at the casualties among Syrian children, saying it had run out of words.