The number of sick days taken by Britons fell to a record low last year, as millions were asked to work from home during the pandemic.

Office for National Statistics (ONS) figures estimated sickness absence – the number of working hours lost due to illness or injury – hit 1.8 per cent in 2020, the equivalent of about 3.6 days per worker.

This was the lowest level since records began in 1995, and below the predictions for the previous year when 1.9 per cent of working days were lost which was equal to 4.2 days per worker.

Covid was only the fourth most likely reason for Britons to take days off, despite the pandemic. But statisticians said this could be because cases were ‘mis-reported’ and placed in other categories including ‘minor illness’.

The ONS said the pandemic may have driven down the number of sickness days taken because lockdown measures – including shielding and working from home – blocked the spread of other diseases like flu.

They added working from home may also have allowed those feeling too ill to travel to still turn up for work, while putting millions on the furlough scheme likely reduced the number of absences from other causes. 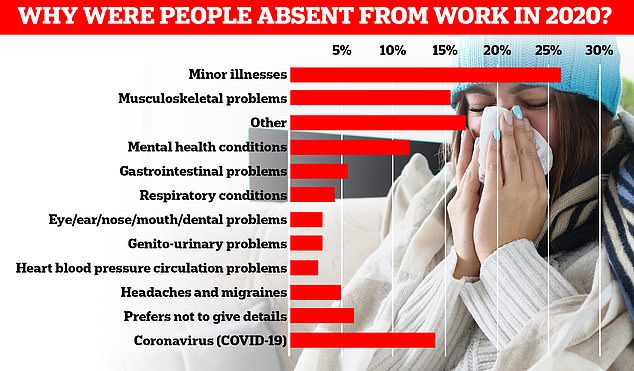 Covid was only the fourth most likely reason for people to take time off work. But statisticians said this could be because many cases were misrecorded

The ONS estimates were based on figures from the Labour Force Survey (LFS). This asks more than 100,000 individuals about their experiences at work and how many sick days they have taken once every three months.

Statisticians also replace 20,000 people in their sample every quarter, to ensure they are getting estimates that better reflect the whole population.

Explaining their results, the ONS said: ‘While the virus may have led to additional sickness absence, measures such as furloughing, social distancing, shielding and increased homeworking appear to have helped reduce other causes of absence, allowing the general downward trend to continue.’

They added: ‘Homeworking could also allow people to work when they were a little unwell, they might not have travelled to a workplace to work but feel well enough to work from home.’

In 2020 the main reason for taking time off work was minor illness (26.1 per cent), which includes coughs and colds triggered by respiratory viruses.

Other illnesses – including accidents, infectious diseases and skin disorders – was the second most likely reason for missing a shift (17.1 per cent).

Musculoskeletal problems such as back pain, and neck and upper limb problems were the third most likely reason (15.4 per cent) to take time off work.

They were followed by Covid-19 (14 per cent). But statisticians warned some cases of the virus may have been included in the minor illness and other illnesses categories because the data was self-reported. 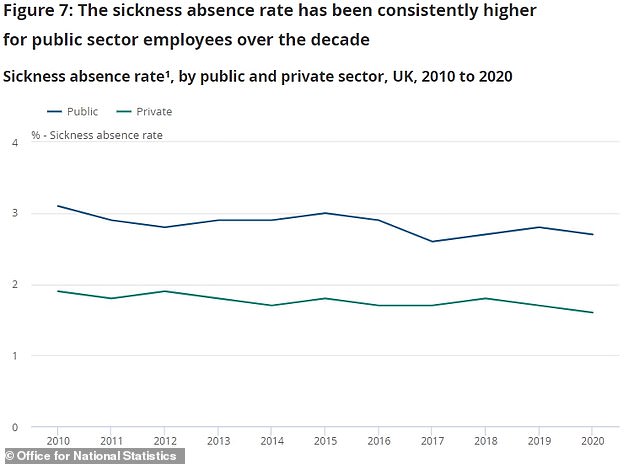 More working hours were lost to sickness among those working in the public sector compared to those in private companies, official data showed 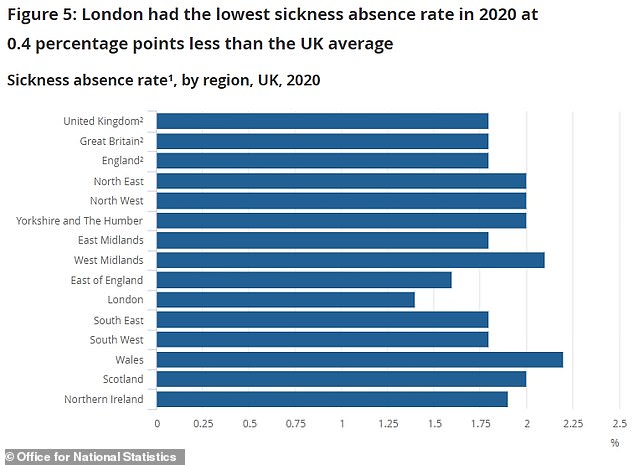 The fewest number of hours lost to sickness were in London, ONS figures showed 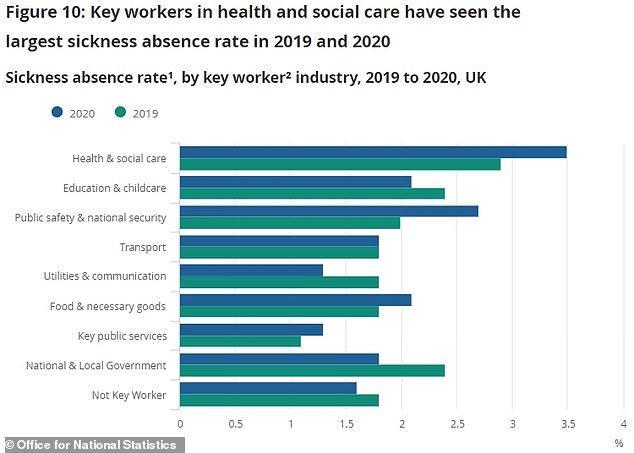 Absence rates also fell in almost all groups compared to last year. But they rose among healthcare workers, public safety employees, grocery store workers and those in key public services

The figures also showed the sickness absence rate was higher among those working in the public sector (2.7 per cent) compared to those working for private companies (1.6 per cent).

Across the UK the number of days lost to sickness was lowest in London (1.4 per cent of working days lost to illness), the figures showed.

It was followed by the East of England (1.6 per cent) and the East Midlands, South East and South West (1.8 per cent).

The sickness absence rate was highest in Wales (2.2 per cent), the West Midlands (2.1 per cent) and the North East, North West, Yorkshire and the Humber and Scotland (2 per cent).

Healthcare workers had the highest sickness absence rate last year (3.5 per cent) and the year before, as hospitals were stretched by a massive influx of Covid patients.

The highest rise in the rate was recorded among public safety and security staff after it rose by 0.8 per cent (2.7 per cent overall).