UK weather: Storm Alex will bring a MONTH’S worth of rain in three days

Britain is facing a washout weekend with Storm Alex bringing gales and heavy downpours today followed by up to five inches of rain tomorrow and Sunday.

More than a month’s worth of rain could fall in some places over the three days as further warnings were issued after the incoming low pressure system was declared the first named storm of the autumn.

It has been named Storm Alex by French weather forecasters Meteo-France as it originated on the Continent. The storm would have been called Aiden if it was named by UK and Irish forecasters.

A peak wind gust of 115mph was recorded in Brittany last night as Storm Alex came ashore over north-western France, which matches the peak UK gust for the Great Storm of 1987 – although the French record is 138mph.

Power cuts hit homes across England this morning, with nearly 1,230 properties blacked out in Newark-on-Trent, Nottinghamshire; 550 in Crawley, West Sussex; and more than 60 in Exeter and Plymouth, Devon.

Power board engineers were working in increasingly atrocious conditions to restore supplies but with winds increasing in strength, trees were at risk of being blown on to overhead cables.

Today’s weather warning covers southern counties of England from Cornwall to Kent as well as South Wales and Herefordshire between 3am and 8pm. By 8am today, Alex was centred close to the Channel Island of Alderney.

Up to two inches of rain could fall, while gale force winds are set to reach 65mph on exposed coasts and 55mph inland. The Met Office is warning of flooding and ‘dangerous’ driving conditions due to spray and high winds. 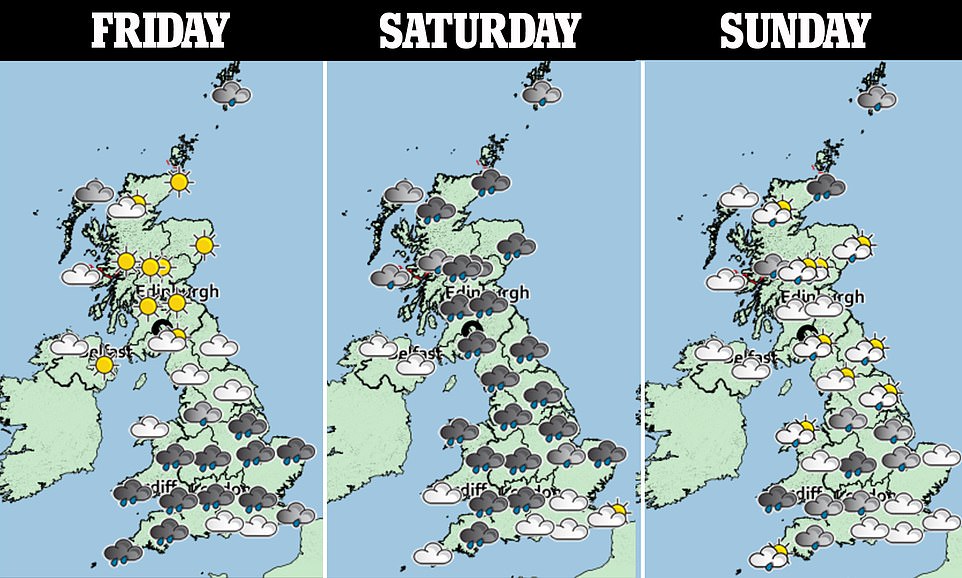 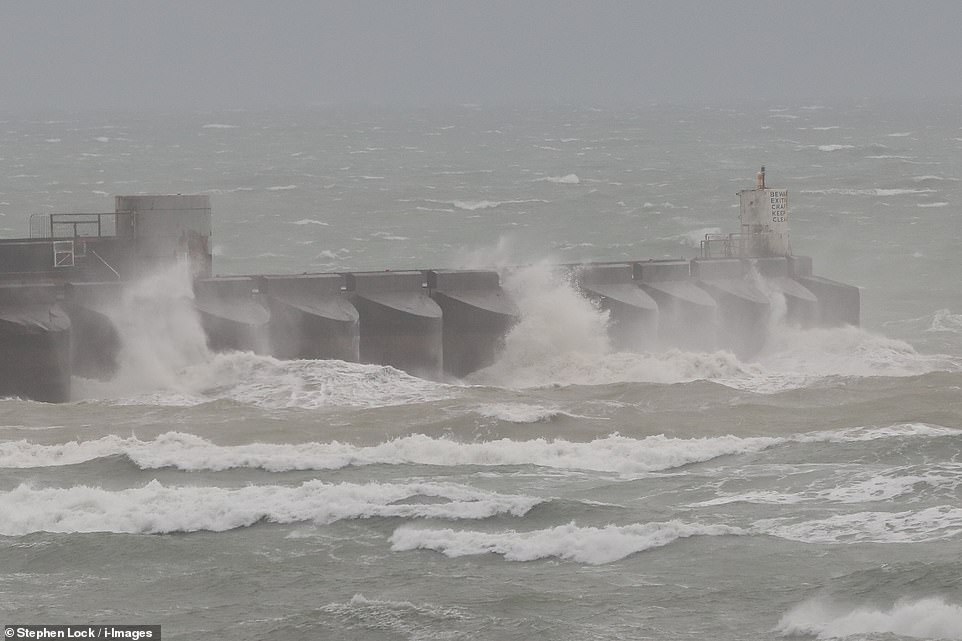 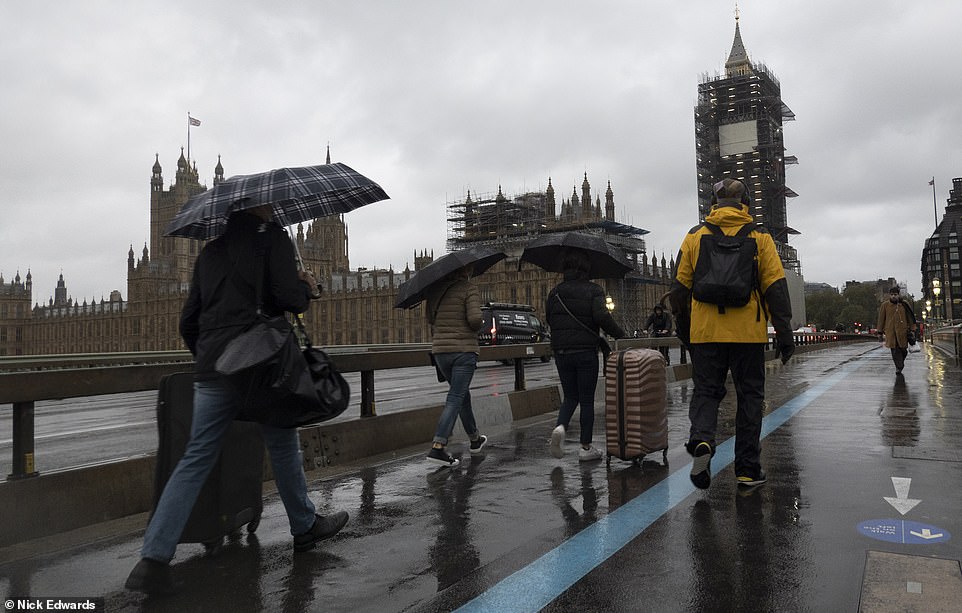 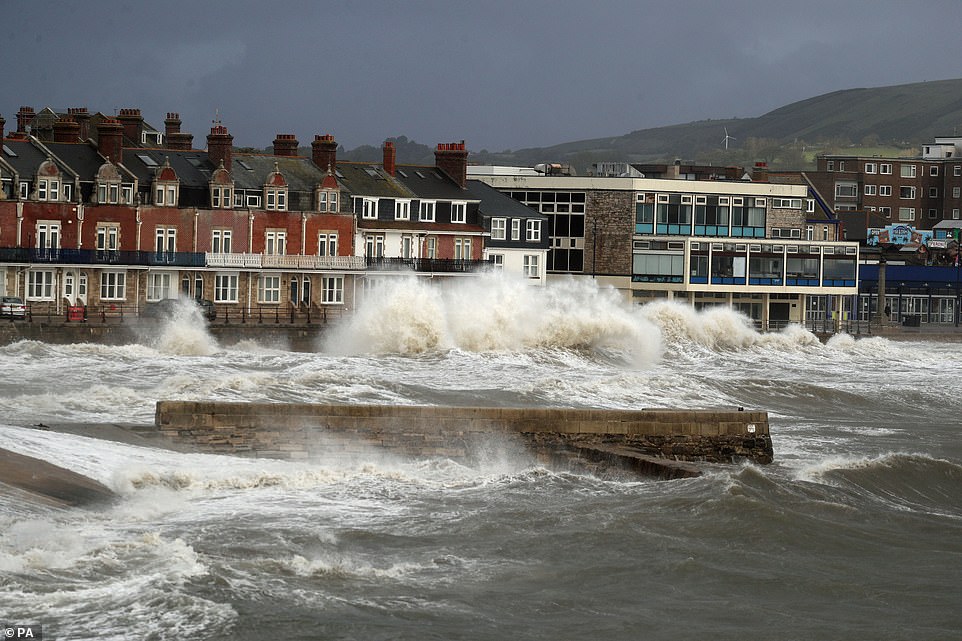 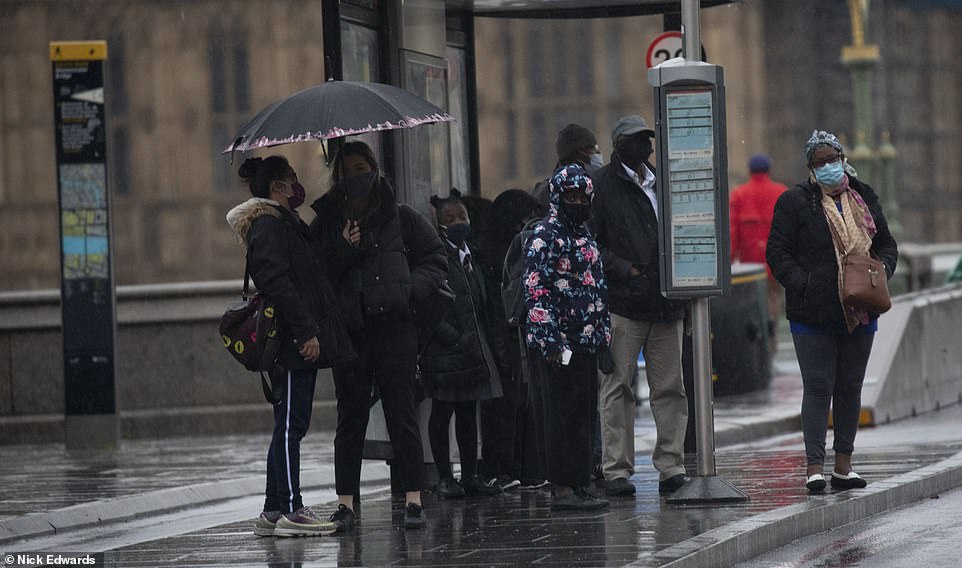 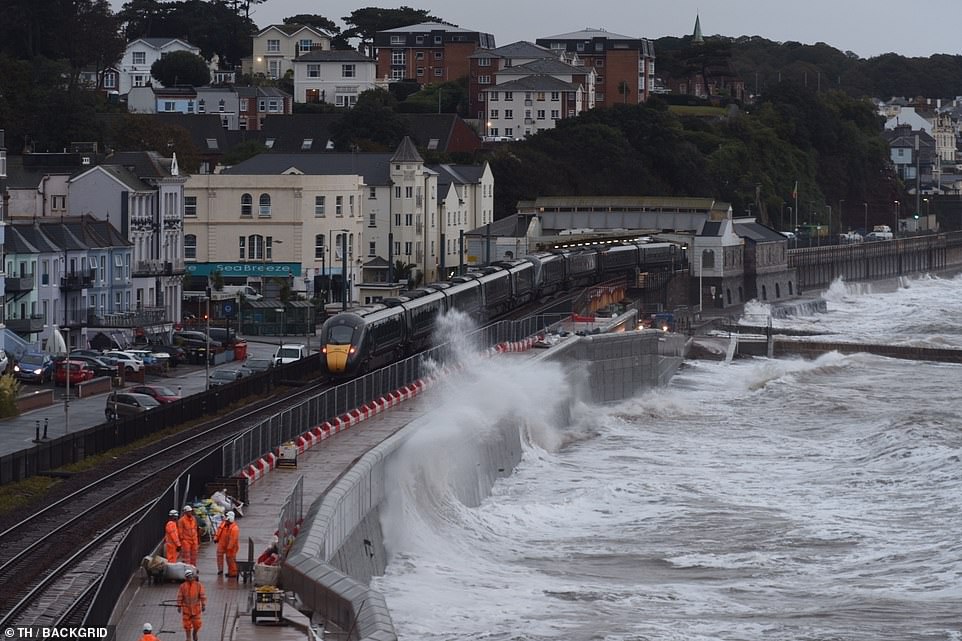 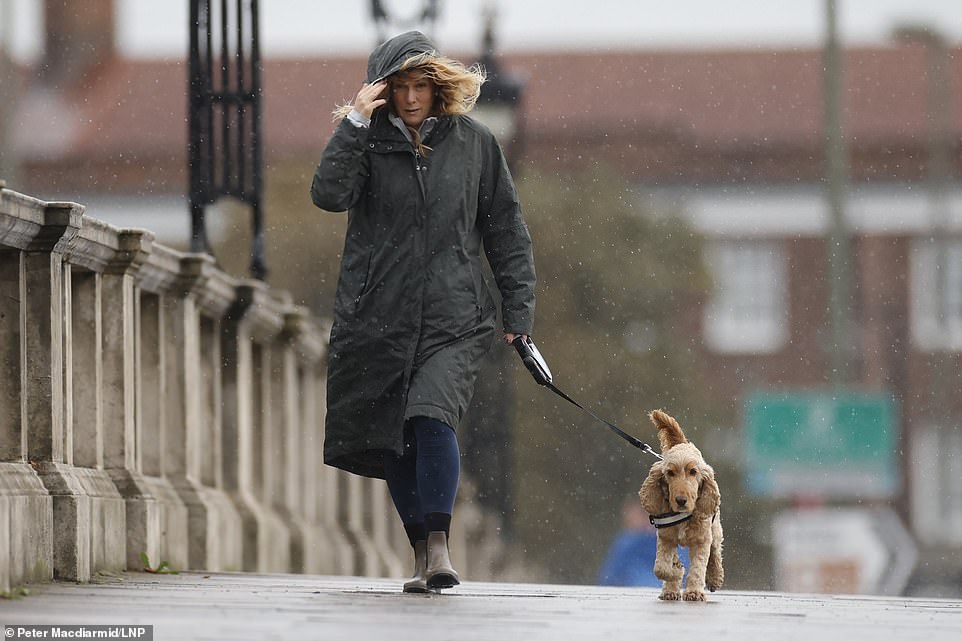 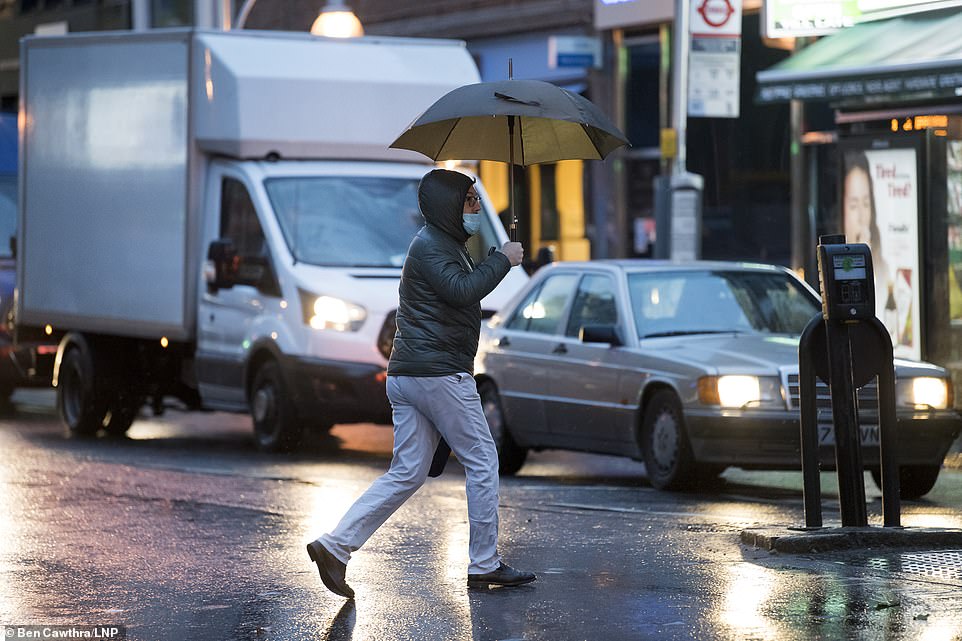 A pedestrian shelters underneath an umbrella as they walk through heavy rain and wind today in Notting Hill, West London 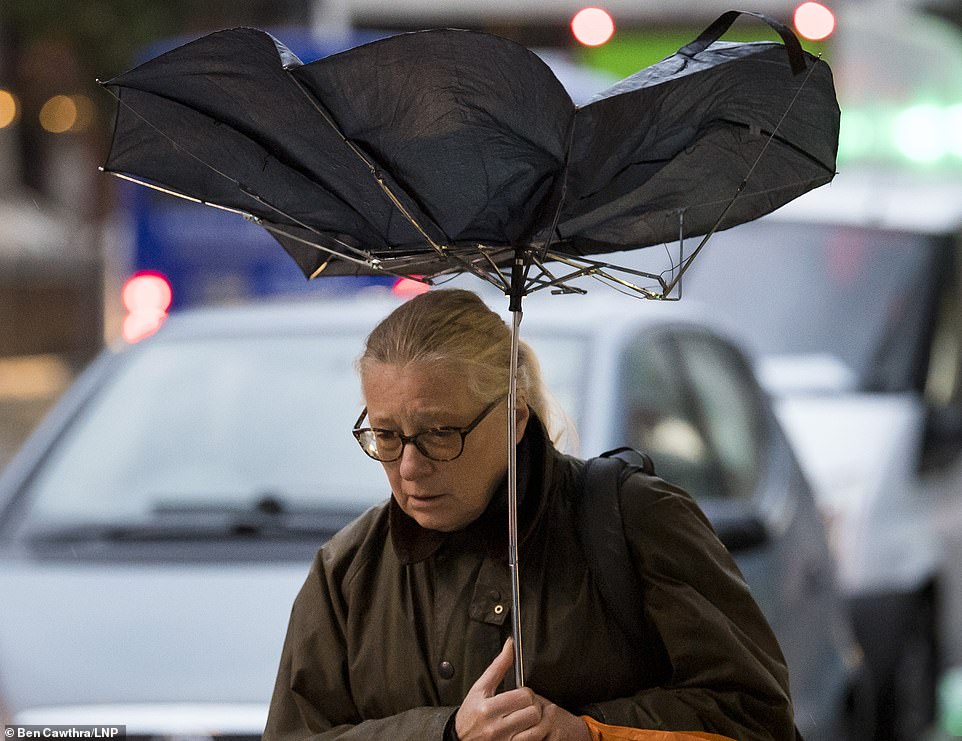 In the wake of the storm, a second system is due to bring more heavy rain over the weekend. This has triggered a second set of weather warnings which cover almost all of England, all of Wales and the eastern side of Scotland.

The warnings last from 3am tomorrow until 6pm on Sunday – and include a ‘danger to life’ alert due to the chance of ‘fast-flowing or deep floodwater’.

‘There is a small chance some communities could be cut off,’ the Met Office states. It also said there is also a risk of landslides and ‘very difficult driving conditions’.

Met Office spokesman Bonnie Diamond said: ‘Unusually, the weather system moving in on Saturday is coming from the East, rather than the South West.

‘It means eastern counties which are usually more sheltered will bear the brunt of the system. Over the weekend, some places could see more than the average rainfall for the whole of October.’

The wettest conditions are set to be in eastern Scotland but very heavy rain is also expected on the high ground of Wales and South West England. 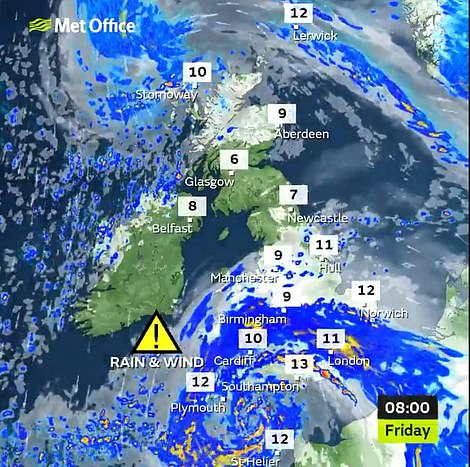 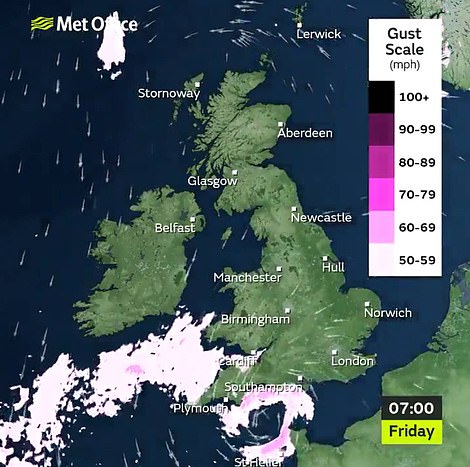 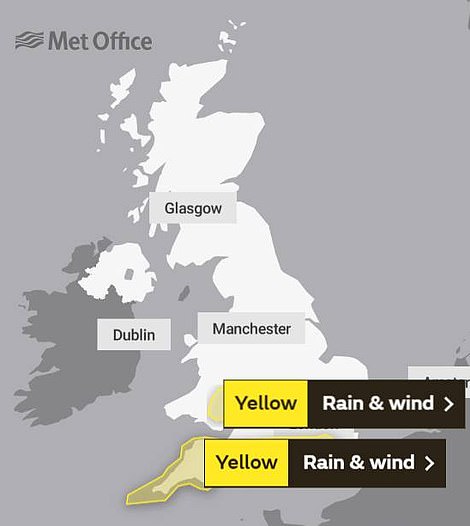 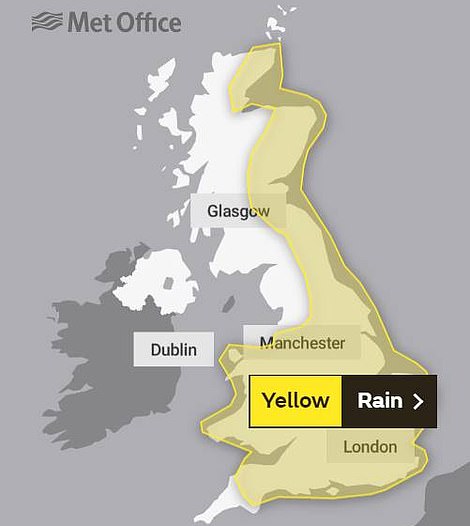 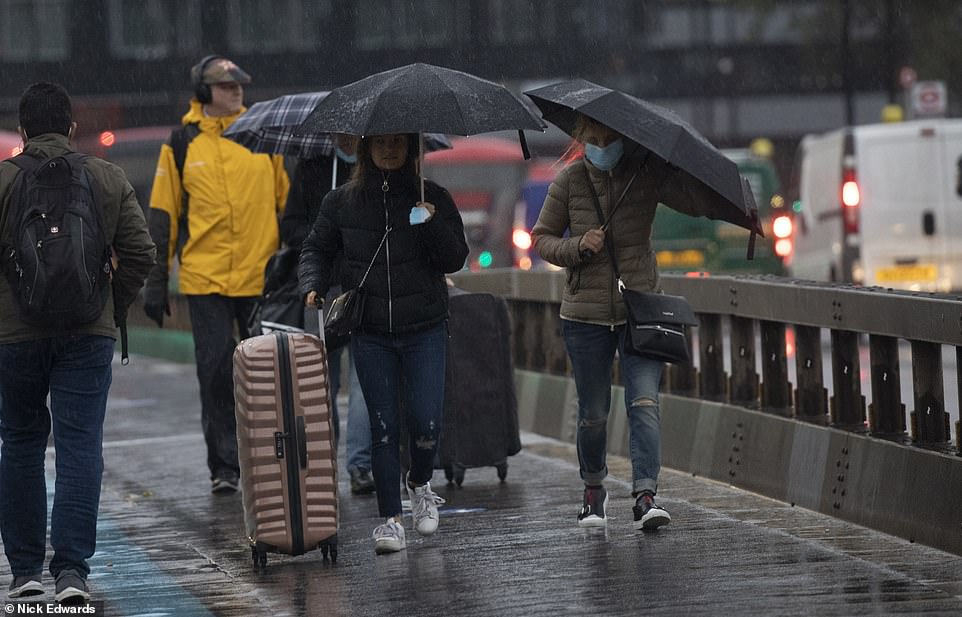 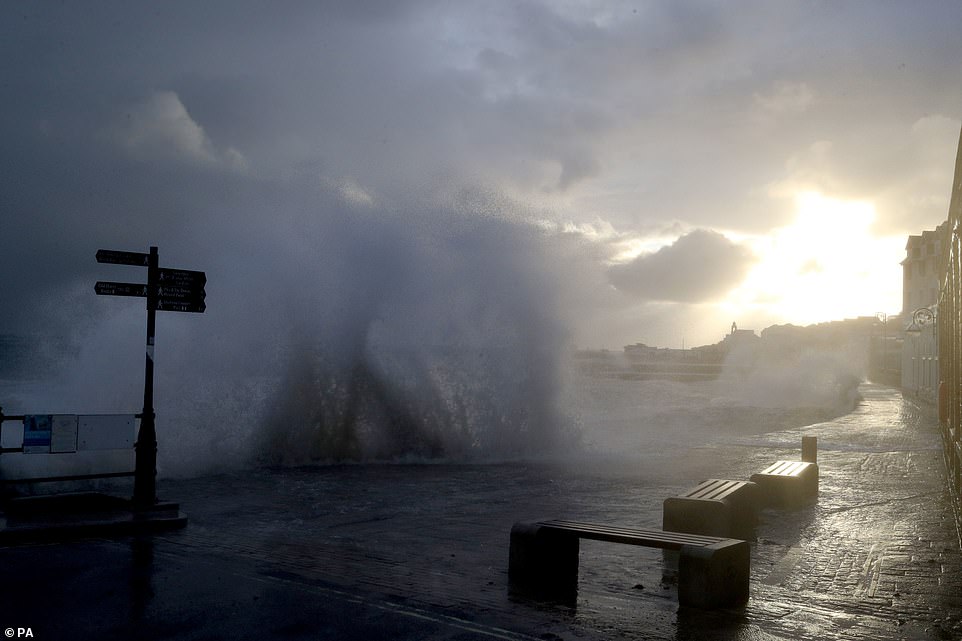 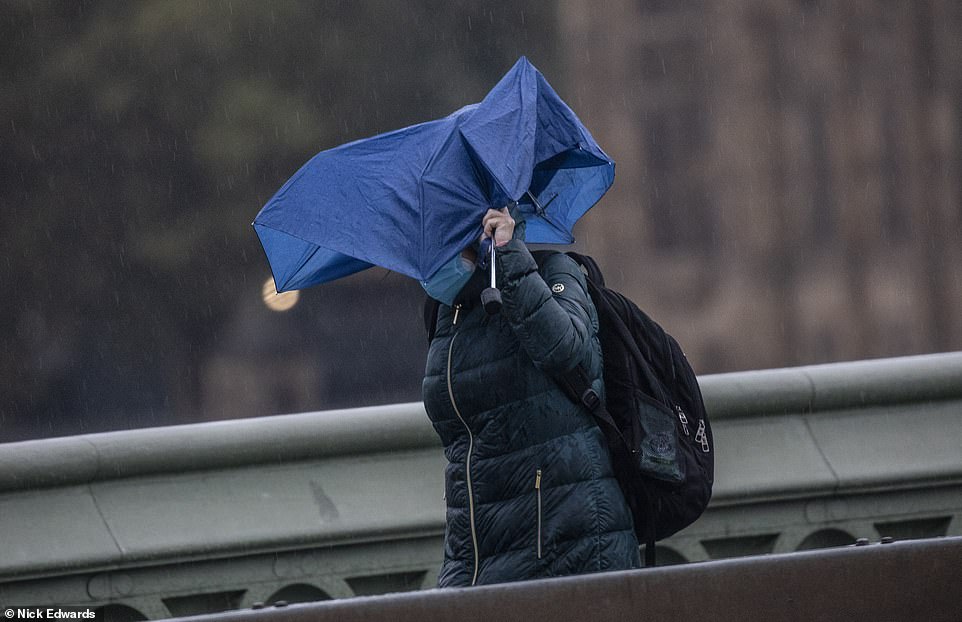 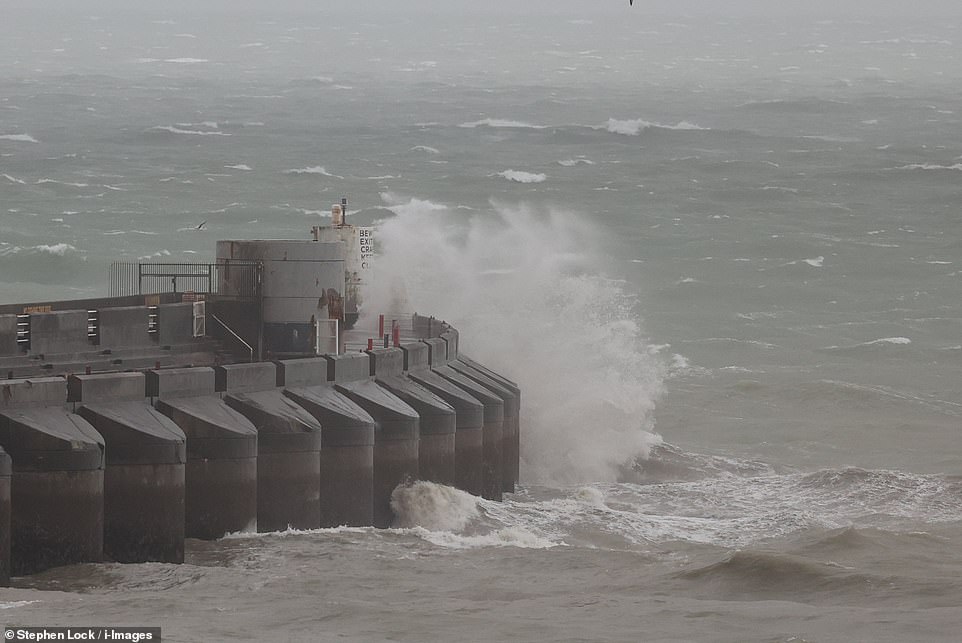 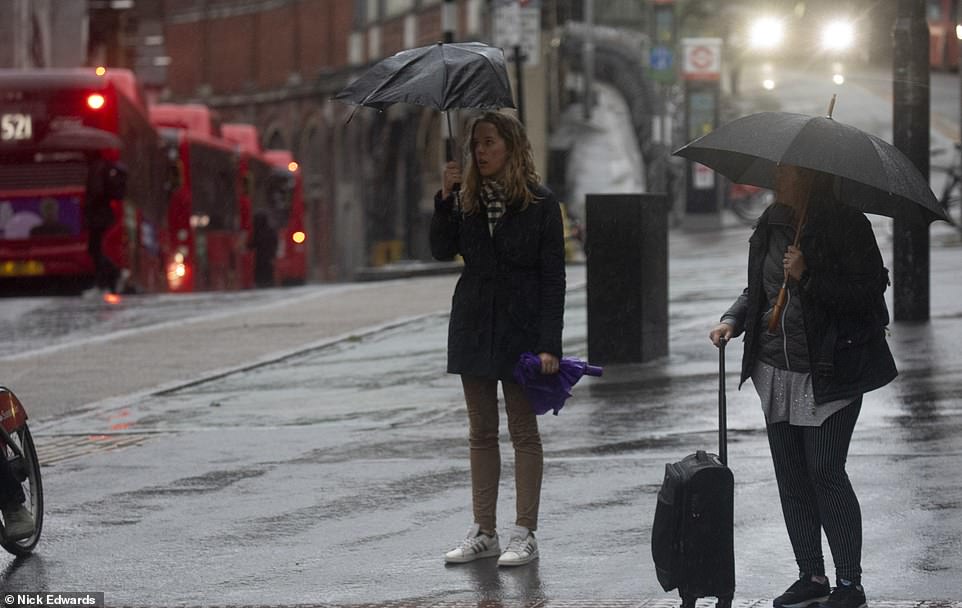 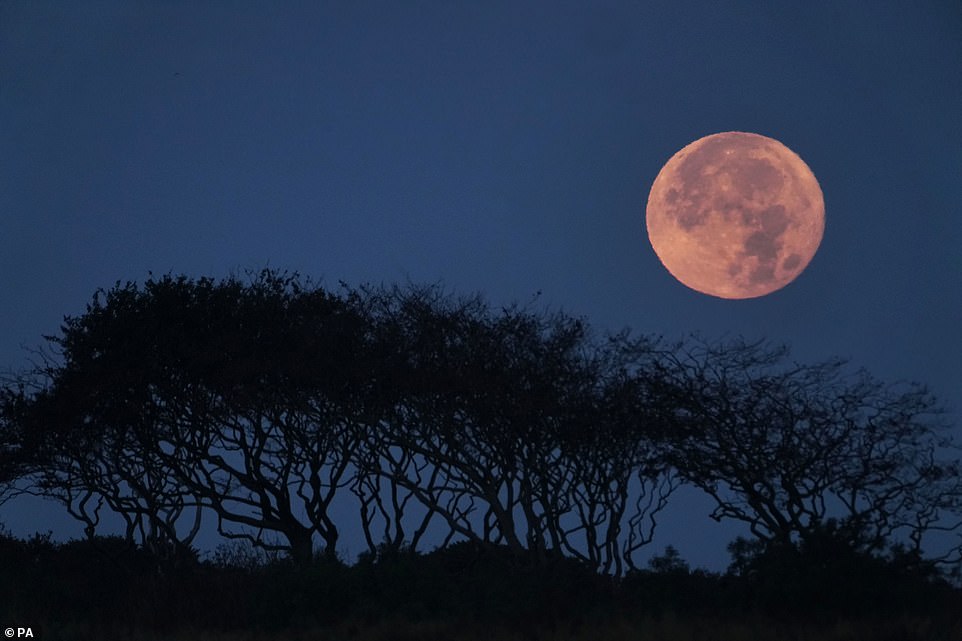 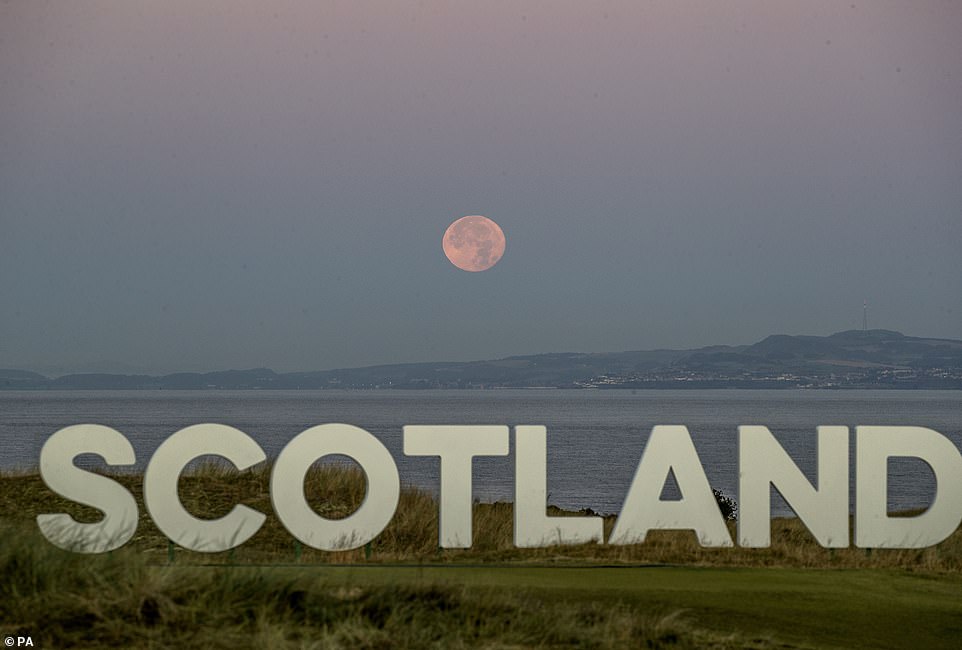 What does the weather warning for today say?

A spell of wet and windy weather is expected, with potential for flooding and transport disruption.

Rain and showers overnight Thursday into Friday will turn heavier and more persistent during Friday morning, along with a strengthening east to north easterly wind.

Some places could receive 40-50 mm over the course of 12-18 hours, most likely in the south of this region whilst the high ground of southeast Wales could see 50-70 mm in a few spots.

The rainfall will occur with strong winds with gusts of 45-55 mph inland during Friday morning rush hour.

Some coastal regions could experience gusts of 60-65 mph, particularly exposed parts of Devon and Cornwall.

The wind and rain will ease from the south, as the weather system responsible starts to move away.

The most significant rain is due tomorrow before turning more showery on Sunday but some places could still see heavy downpours.

Chief meteorologist at the Met Office, Steve Ramsdale described the forecast as a ‘miserable end to the working week’ and warned of gales before another band of wet weather arrives for larger swathes of the country.

He added: ‘As the strong winds and rain associated with Storm Alex clear away from Britain later on Friday, another low-pressure system moves towards the UK from the east bringing further very heavy rain and strong winds to many over the weekend.’

The Met Office’s concerns were echoed by the Environment Agency, which said: ‘Heavy rain will bring the potential for surface water flooding and perhaps some river flooding across the south of England on Friday.

‘More widespread and persistent heavy rain across much of England will bring the potential for further river and surface water flooding over the weekend.

‘We urge people to stay away from swollen rivers and not to drive though flood water, it is often deeper than it looks and just 30cm of flowing water is enough to float your car.’

Miss Diamond added: ‘On Monday it is due to become a little less unsettled and windy. There is still due to be a chance of showers but it certainly won’t be as wet. The weather is due to stay unsettled into next week.’

And RAC breakdown spokesman Rod Dennis said: ‘Heavy rain will make road conditions miserable if not downright dangerous for drivers this weekend, and they’ll need to be prepared for an ugly mix of surface spray, gusty winds and more than likely some disruption on the roads.

‘Floods are also a possibility so drivers should remember never to attempt to drive through water unless they know for sure that it’s shallow enough. For drivers who are unlucky enough to breakdown in the horrid conditions, our patrols will be working around the clock to get them moving again.’

Looking further ahead, the Met Office said unsettled weather is forecast to continue until the middle of the month.

Its forecast states: ‘An unsettled picture is likely for this period, with all parts of the country seeing showery spells as well as times of more prolonged rainfall.

‘Southern and western areas are expected to see the worst of these conditions with the most frequent and heaviest rainfall. Drier and calmer conditions could be seen at times, but likely only for short interludes.

‘Largely windy for most of the country during this period, with a risk of gales at times, particularly along western and south-western coasts. Overall, it is likely to feel rather cold.’

A drier spell, with the chance of sunny days but fog and frost by night, is not expected until the second half of the coming month.