At least two people have drowned in the heatwave gripping Britain as the emergency services urge people to avoid cooling off by jumping into the water.

Police officers have found two bodies over the past 24 hours, first discovering one of a man in his 20s at Cotswold Water Park in Gloucestershire last night.

Divers in London then today recovered the body of a 23-year-old man who had been swimming in the River Thames at Shadwell Basin, a disused cargo harbour.

Scotland Yard said the man had been swimming with friends at 6pm yesterday when he did not resurface. His death is not being treated as suspicious.

One witness said: “I saw the divers pull out the body. Within seconds the body had been transferred to a police tent on the side of the basin.

“There are signs all around the basin saying ‘no swimming’ and a group of teenagers were swimming in the basin at the time the body was pulled out.”

Other searches continue to locate two other men also believed to have gone under the water in the Thames yesterday, at Waterloo Bridge and Kingston.

A fourth person got into difficulty in the Thames in Richmond after they tried to swim across the river, but she was rescued before being helped by paramedics.

Emergency services have warned the public to take precautions during the extreme heat and have highlighted the risks of cooling off in the sea, lakes and rivers.

At Cotswold Water Park, the man in his 20s drowned in a lake while apparently looking for his missing dog during the heatwave, witnesses said. 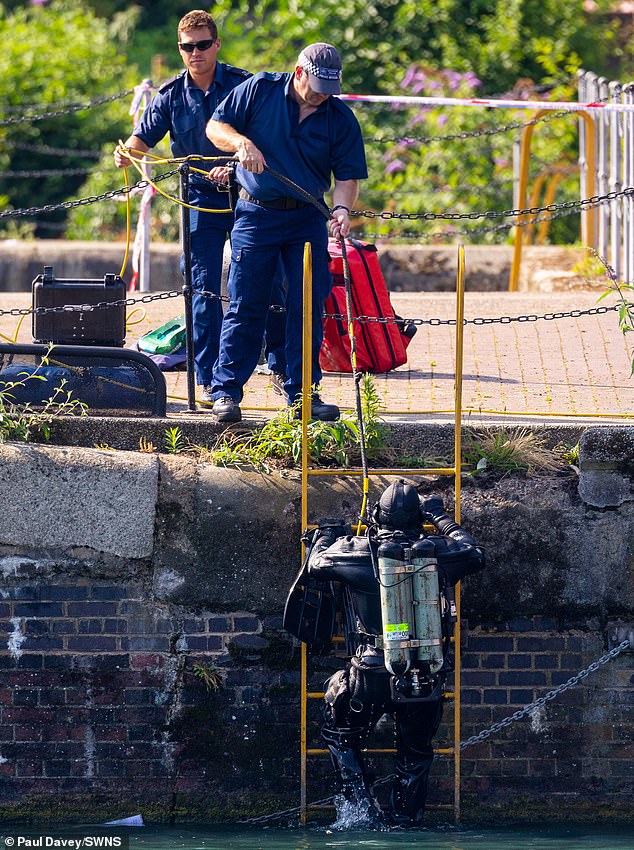 A police diver climbs out of the water today at Shadwell Basin, a former riverside cargo dock

Two men in their 20s and 50s were said to have jumped into the water and swam to his location around 150ft (50m) away from the bank, but they could not find him.

Joanne Pendlebury, from Waterland Outdoor Pursuits which owns part of the lake, said the man was ‘looking for his missing dog’ when he went under the water.

Underwater search teams worked well into the evening at Lake 32 last night and police confirmed the man’s body had been found just before 9pm.

Eyewitness Agnes Baron, 37, said it ‘all happened so quickly’, adding: ‘I saw he was struggling in the water and shouting for help. I ran and raised the alarm.

‘A man who I think was in his 50s jumped into the water accompanied by a strong looking man in his 20s. They got to where he was last seen but could not find him.’

The National Police Air Service and Gloucestershire Fire and Rescue Service sent crews to the scene, then an ambulance hazardous area response team joined them.

Power boats were launched by staff at the site before the emergency services took over, co-ordinated by South Western Ambulance Service. 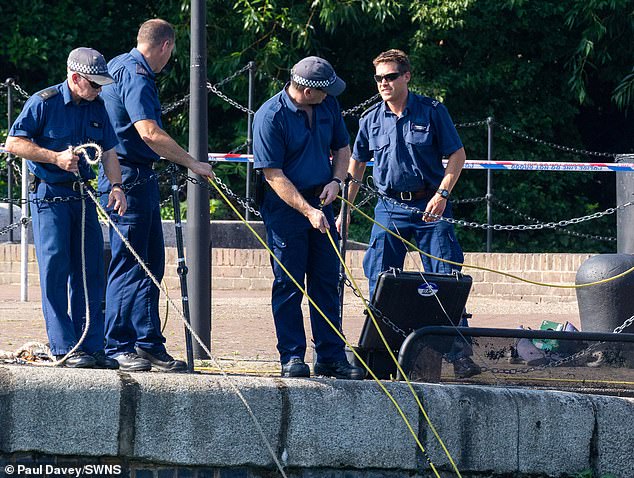 Ms v said she wishes she could have done more to help during the incident, which she estimated ‘happened in about five minutes’.

She stayed by the lake near where the kayaks are hired hoping for some news. ‘I can’t swim very well so I felt helpless,’ she added.

‘The more I think about it the more I feel sorry I couldn’t do anything. It was a busy day at the park. Everyone had gone there to enjoy the sun.

‘I feel really sad this has happened. My thoughts are with the man’s family and friends.’

It is understood the park remained open and police asked people to move away from the lake while the incident was being attended to.

Lake 32 is used for wild water swimming and is assessed annually by the Environment Agency. 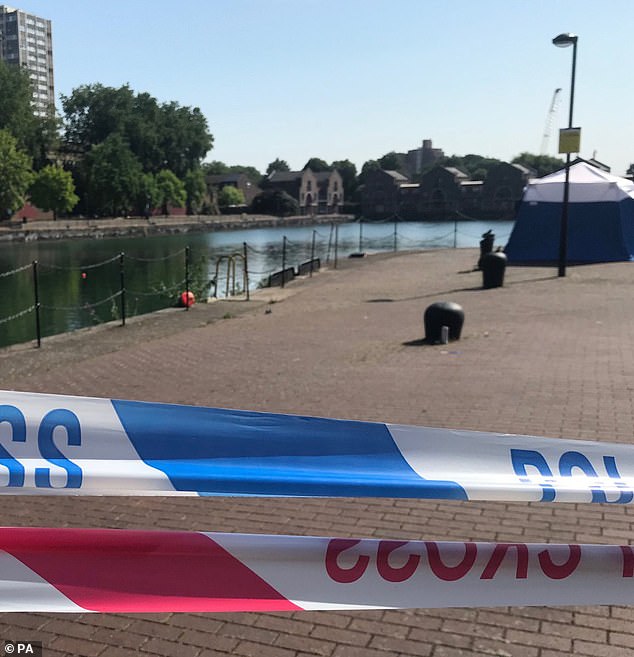 The man had been swimming in the River Thames at Shadwell Basin, a disused cargo harbour

The park is leased by Cotswold Water Park Trust and run by a separate management company.

A spokesman for Gloucestershire Constabulary said the force responded to ‘reports that a swimmer had disappeared in the lake’.

She added: ‘A body has been recovered in connection with the search for a swimmer who had gone missing in the lake at Cotswold Water Park this afternoon.

‘Officers conducted searches along with the National Police Air Service (NPAS), Severn Area Rescue Association (SARA) and Fire Service and the body of a man was pulled from the water shortly before 8.50pm.

‘He was sadly pronounced dead at the scene and the coroner and the man’s next of kin have been informed.’

In July 2016, a 29-year-old man drowned in Shadwell Basin after jumping into the water with 100 other people.

Large swathes of Britain experienced storms and lightning strikes overnight as the country braces for what could be its hottest day ever later this week. 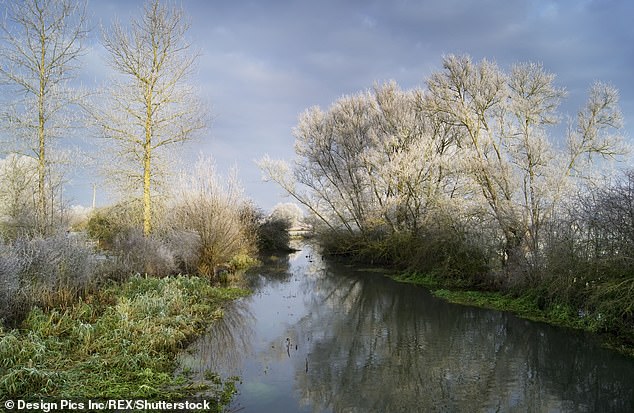 Temperatures in London got up to 92.7F (33.7C) yesterday and the heatwave is expected to continue this week with a possible 102F (39C) tomorrow.

An RNLI spokesman said: ‘No matter how calm and inviting the tidal Thames looks at the moment, the current is extremely strong and you’re unlikely to get out again if you jump in for a swim.

‘You can disappear from the surface in a matter of seconds.

‘Even in the middle of summer, you may experience cold water shock in rivers or the sea where you inhale water involuntarily because the temperature is so low.

‘This can cause you to drown. If you see or hear anyone else planning to jump in, please try to convince them not to do so.

‘If you see them jump in, please call 999 and ask for the Coastguard.

‘If you fall into cold water by accident, remember to float on your back until your body acclimatises and move your arms and legs gently until you can breathe calmly. Then shout for help or try to make your way to safety.’