This is the face of the ‘butcher of Mariupol’ – the Russian general overseeing a siege which has deprived the city of food, water and power for a month during merciless bombardments that have killed thousands of civilians.

Colonel-General Mikhail Mizintsev, who has served as the Director of the Russian National Centre for Defence since 2014, was identified as the commander overseeing the operation earlier this week when he personally issued a demand for Ukrainian troops defending the port to surrender – which they rejected.

It means Mizintsev likely gave the order to bomb a maternity hospital in the city that killed a heavily pregnant woman and her unborn child; to bomb a theatre sheltering hundreds of children who were likely buried alive in the rubble; and to indiscriminately shell neighbourhoods in attacks that have left corpses rotting in the streets.

And it would not be the first time he has given such grim commands. In his role as defence chief, Mizintsev was also likely to have helped devise Russia’s military strategy in Syria – including the bloody siege of Aleppo, which has chilling parallels with the horror being inflicted in Mariupol.

Colonel-General Mikhail Mizintsev, Director of the Russian National Centre for Defence, revealed as the man overseeing the siege of Mariupol after issuing a demand for Ukrainian forces to surrender earlier this week 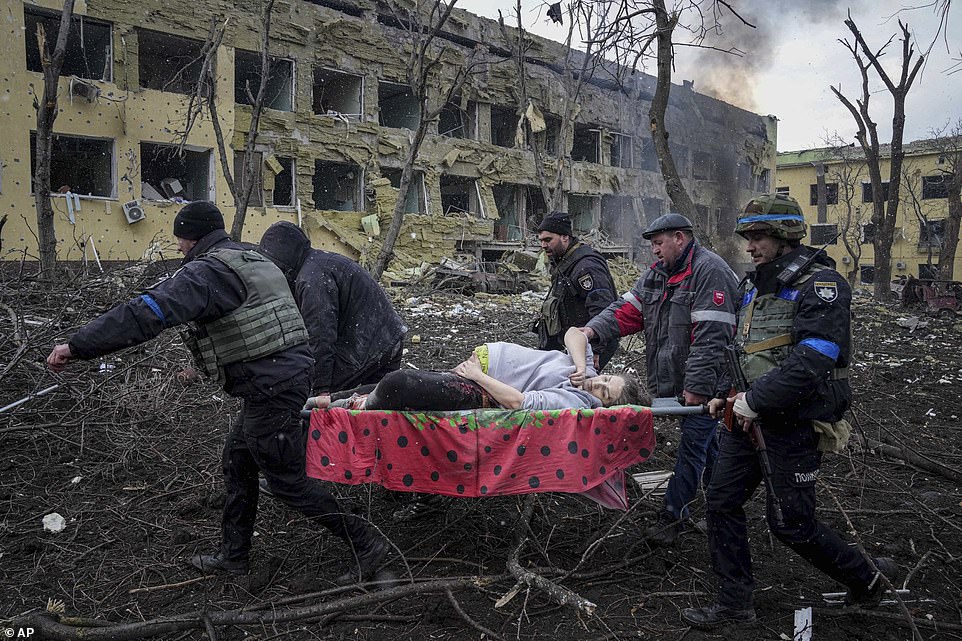 Mizintsev was therefore likely to be the one who ordered Russian jets to bomb a maternity hospital earlier this month, leading to the death of a heavily pregnant woman and her unborn child (pictured above, shortly before she died) 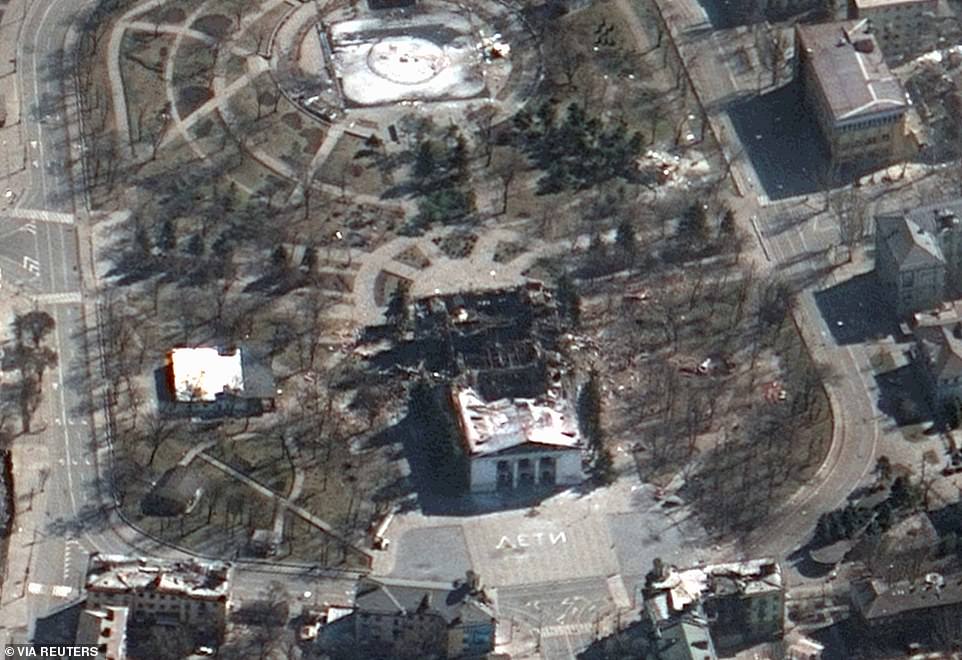 The general is also likely to have ordered the bombing of a theatre being using to shelter children – which had the word written on the pavement outside – killing an unknown number of people, thought to be in the hundreds 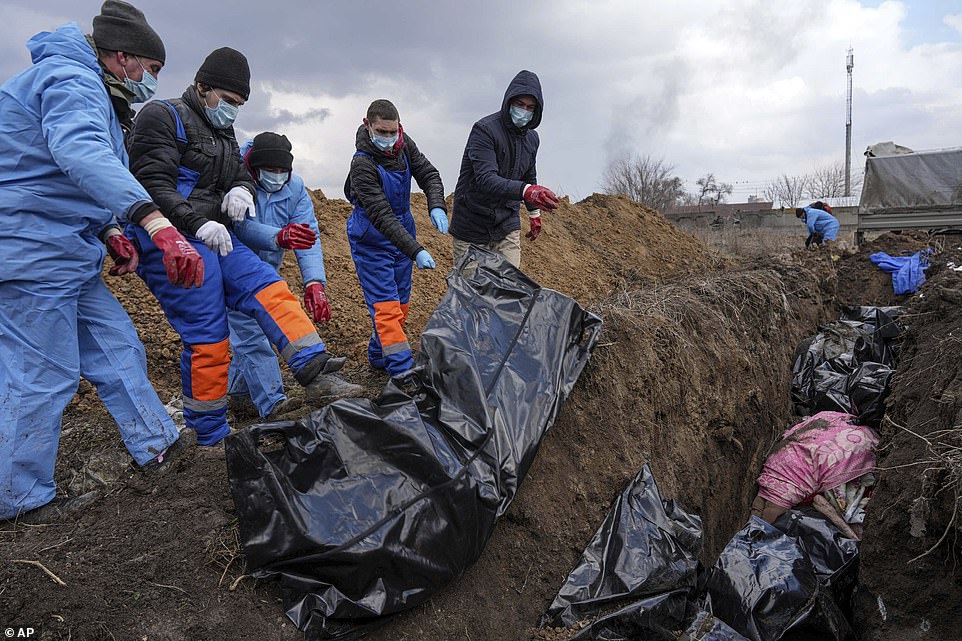 Mariupol has now been under siege for almost a month and bombed near-continuously, leaving at least 2,000 civilians dead – though local officials say the true figure could be in the tens of thousands (pictured, civilians rolled into mass graves) 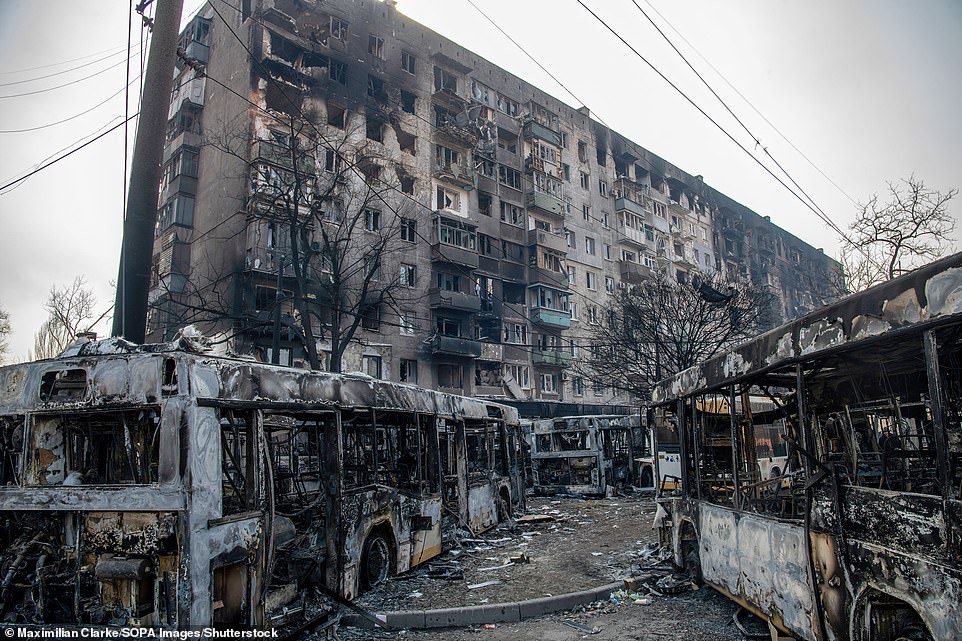 Civilian areas have been indiscriminately targeted by Russian artillery during the siege, with an estimated 90 per cent of the buildings in the city now damaged or totally destroyed 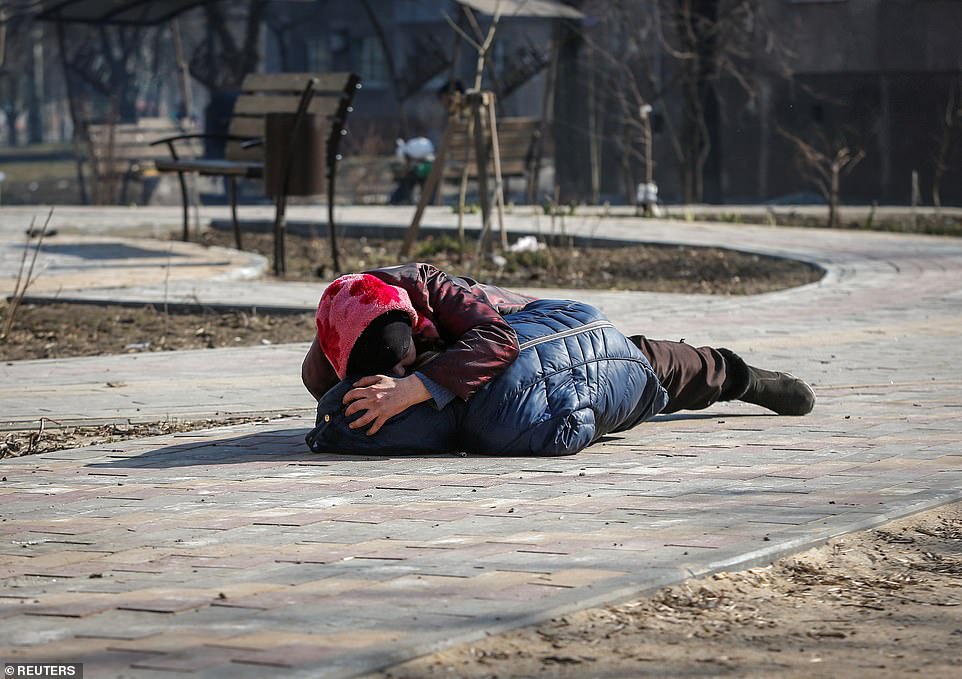 A mother covers her son as they lay on a ground after hearing shelling during Ukraine-Russia conflict, in the besieged southern port of Mariupol, Ukraine March 23, 2022 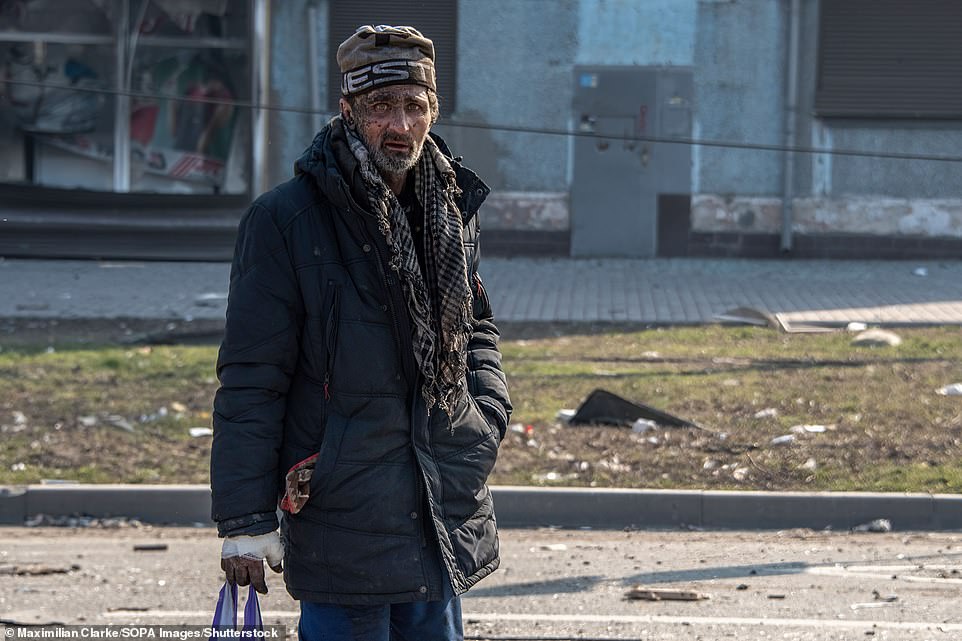 Dazed and covered in dried blood, a man stares at the camera as he walks to a checkpoint leading out of the besieged city of Mariupol, after some areas were captured by Russian forces

Joining Bashar al-Assad in his efforts to re-take Syria from various rebel groups – some of them Western-backed – who had carved up the country between them during the civil war, Russian forces helped the dictator besiege and eventually recapture the north-western city of Aleppo from Free Syrian Army troops.

In total, the battle to re-take the city lasted for more than four years – but the most intense period came in late 2016, when Russian and Syrian forces surrounded the eastern half of the city while 270,000 civilians were still inside and bombed it for months before rolling in troops and tanks to capture it.

The Syrian Network for Human Rights estimates that at least 1,640 civilians were killed during this period, though exact tolls are hard to come by and could be higher. Observers who spoke to the LA Times said the siege was ‘marked by a degree of unparalleled savagery and suffering’ during the entire conflict.

Russian forces used cluster bombs, chemical weapons and incendiary bombs – all of which are banned under international charters – during the siege, often again civilian areas. Evidence emerged that hospitals had been systematically targeted, and were eventually completely destroyed in bombing raids.

Frequent ceasefires were declared, but often the breaks in the fighting were used by Russian and Syrian forces to re-arm and reposition before resuming the assault. Others were not observed at all, or used for propaganda purposes – with rebels accused of breaching them as a pre-text for doubling down with attacks.

Humanitarian corridors were eventually offered to civilians who wished to escape the fighting, and while thousands did manage to flee, others said they were arrested trying to get out – while some were reportedly executed or died along the supposedly ‘safe’ routes.

Observers documented over 100 summary executions during the siege, while the Syrian Network for Human Rights said that almost 2,500 people were arbitrarily detained – dozens of them children.

A similar fate is now being meted out to the people of Mariupol, though on a larger scale. Mariupol’s population was more than 400,000 when the siege began almost a month ago, and at least 2,000 civilians have already died in the shelling – though local officials say the true toll could reach 20,000 when final tallies are made. 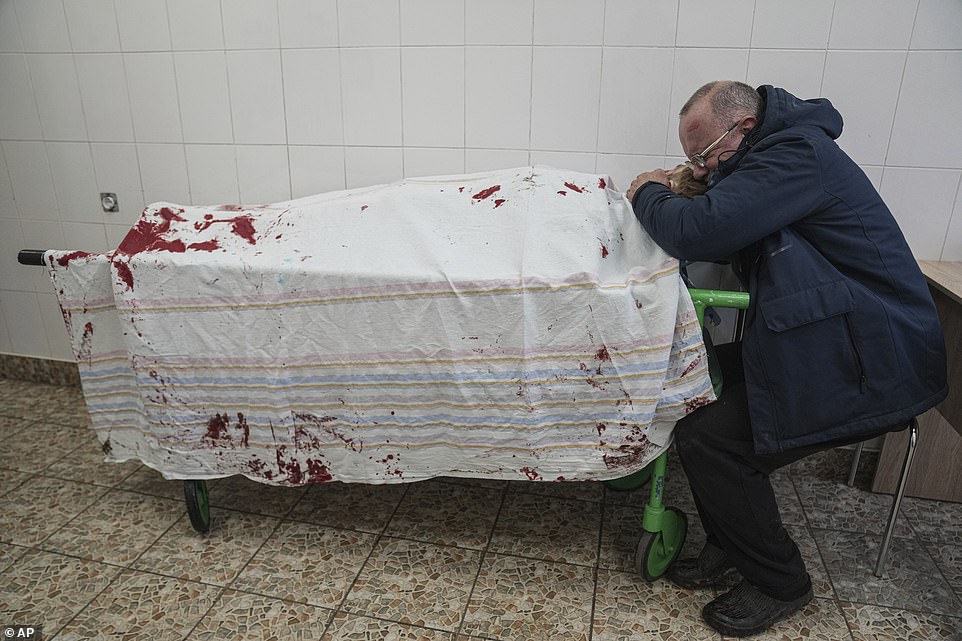 Serhii, father of teenager Iliya, cries on his son’s lifeless body lying on a stretcher at a maternity hospital converted into a medical ward in Mariupol on March 2 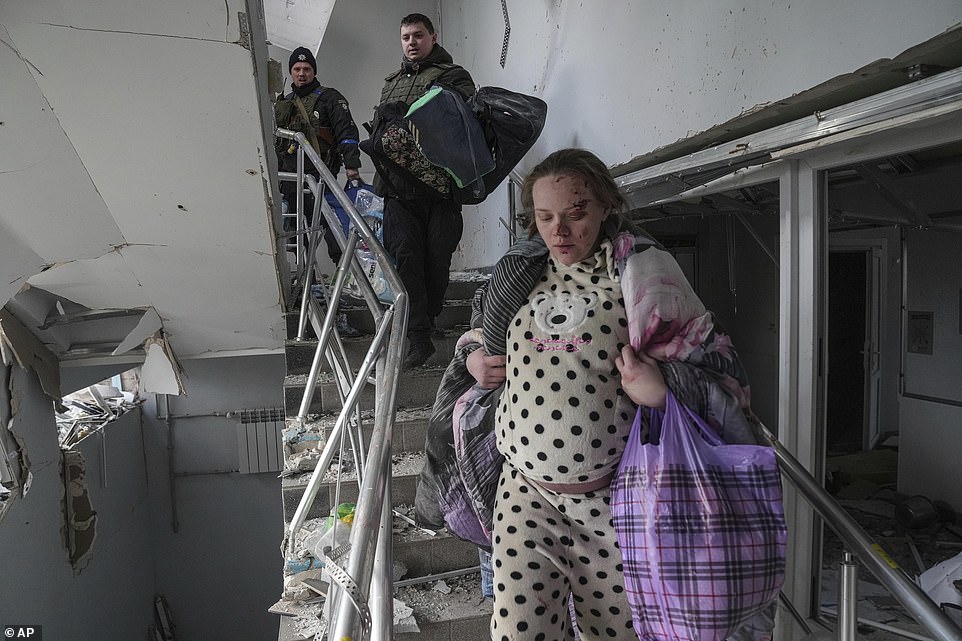 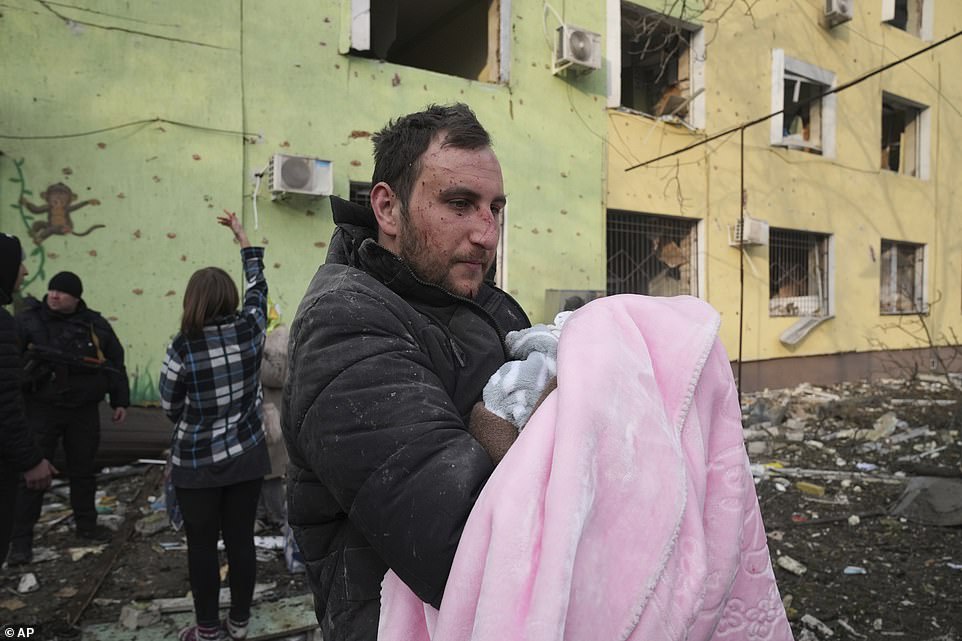 A man holds a baby during an evacuation from a maternity hospital damaged by Russian shelling in Mariupol, Ukraine 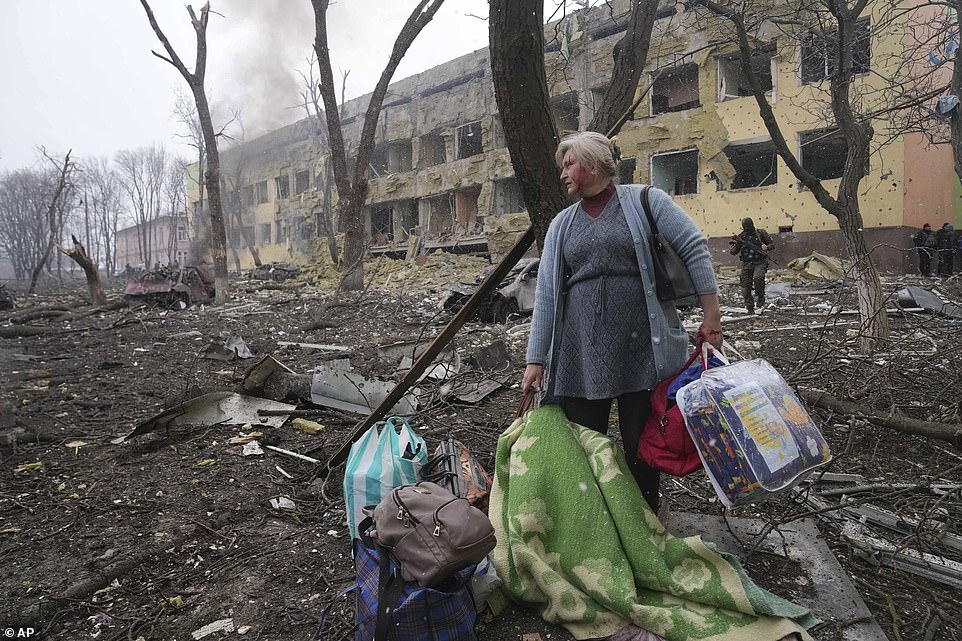 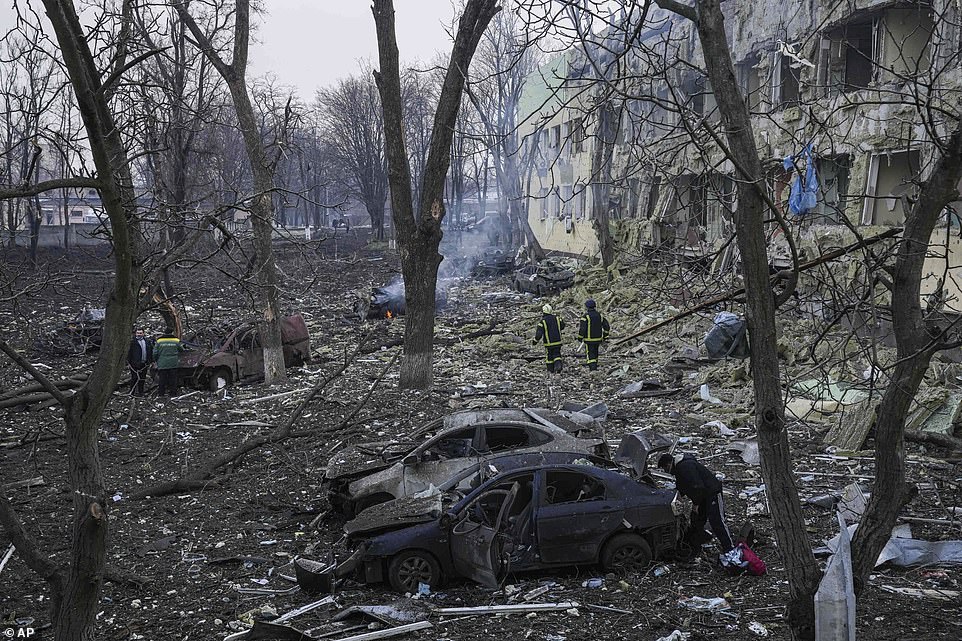 The aftermath of a Russian airstrike on a maternity hospital, with officials saying there can be little doubt that Putin’s forces knew what they were striking at the time

Hospitals in the city have also been targeted, with a maternity ward struck by Russian bombers on March 9 leaving a mother and her unborn child dead, while wounding other women who were in labour at the time.

Perhaps the worst attack came March 16, when a theatre with bomb shelters underneath it that was housing up to 1,300 civilians was directly hit by a Russian airstrike.

At least 130 people are known to have escaped the wreckage of the building, but it is feared that many others were trapped in the bomb shelters which were covered by rubble. Nobody has been able to get to the shelters since, because Russian forces continue to shell the area. Anyone trapped there will likely have died a slow and agnonising death. The final toll of the attack remains unknown.

Olexander Scherba, Ukraine’s former Ambassador to Austria, branded Mizintsev the ‘Butcher of Mariupol’ as he shared an audio clip that purports to capture the general berating a junior officer after a private was caught not wearing his uniform properly.

‘Why is his face not mutilated yet? Why hasn’t anyone cut off his ears? Why isn’t this moron limping yet,’ Mizintsev can be heard saying – calling him ‘scum of the highest order’.

‘At night, when he walks out, unknown assailants jump him. Just jump him over and over, beating him in the face with a bottle and then pouring another litre into it.’

Oleksandra Matviichuk, the head of Ukraine’s Centre for Civil Liberties, has called on Mizintsev to face war crime charges at The Hague.

‘Remember him. This is Mikhail Mizintsev. He is leading the siege of Mariupol,’ she tweeted on Wednesday.

‘It was he who ordered the bombing of a children’s hospital, the drama theatre, etc. He has huge experience of destroying cities in Syria.’

Around  100,000 people are thought to still be trapped inside Mariupol ‘in inhumane conditions’ and under constant attack, according to President Volodymyr Zelensky when he spoke earlier this week.

Mr Zelensky accused Russian forces of not only blocking a humanitarian convoy trying to take desperately needed aid to Mariupol but seizing what another Ukrainian official said were 15 of the bus drivers and rescue workers on the aid mission, along with their vehicles. He said the Russians had agreed to the route ahead of time.

Earlier today, footage emerged of civilians weaving their way through streets littered with dead bodies and piles of debris as they desperately attempt to escape from the decimated city of Mariupol. 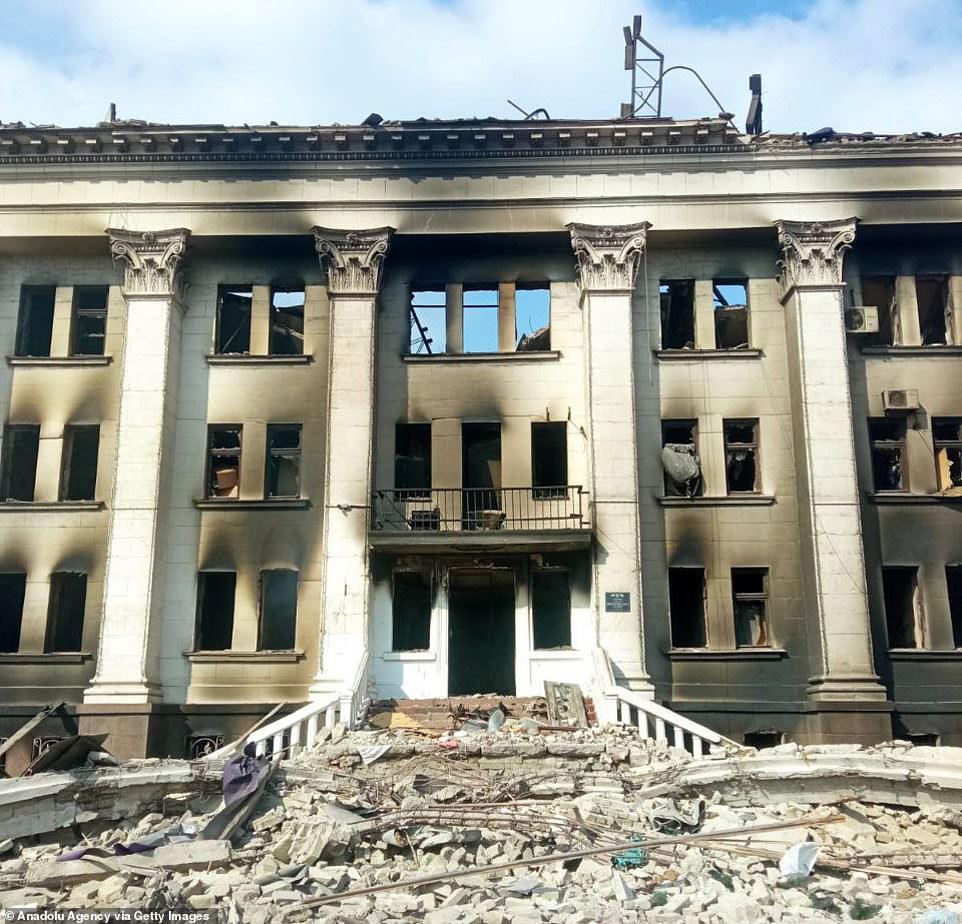 The remains of a theatre being used to shelter up to 1,300 civilians – including children – that was bombed by Russia 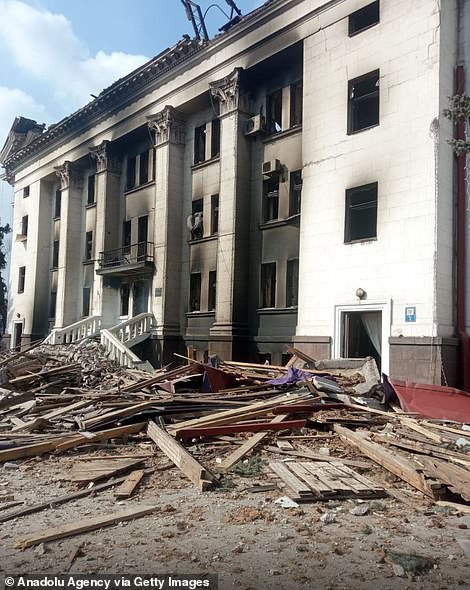 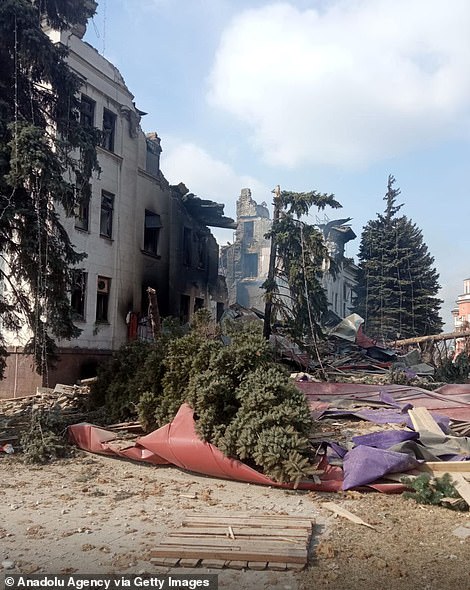 The death toll from the attack is still unknown, with hundreds of people feared buried alive in the ruins of the theatre 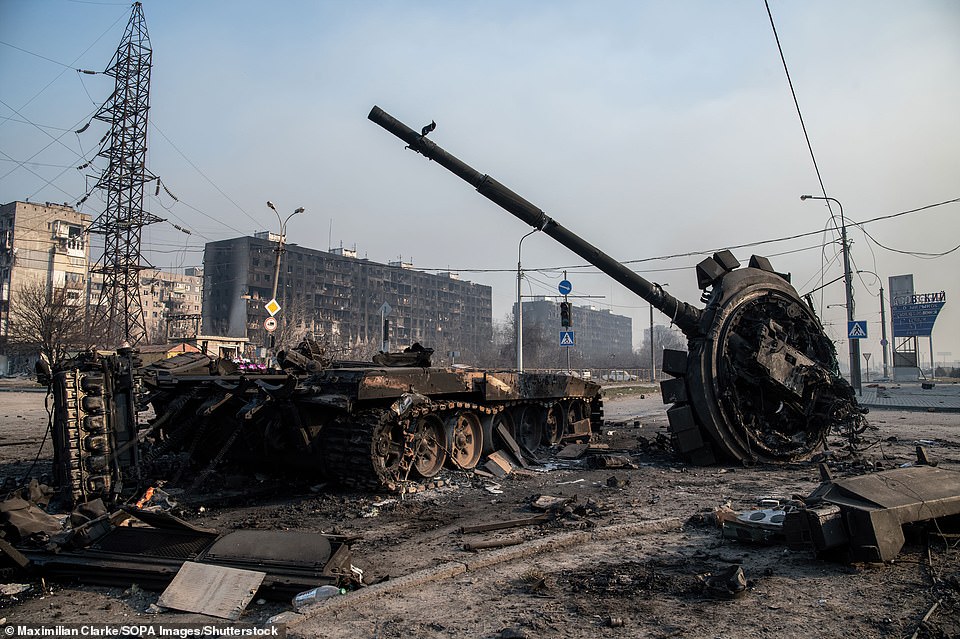 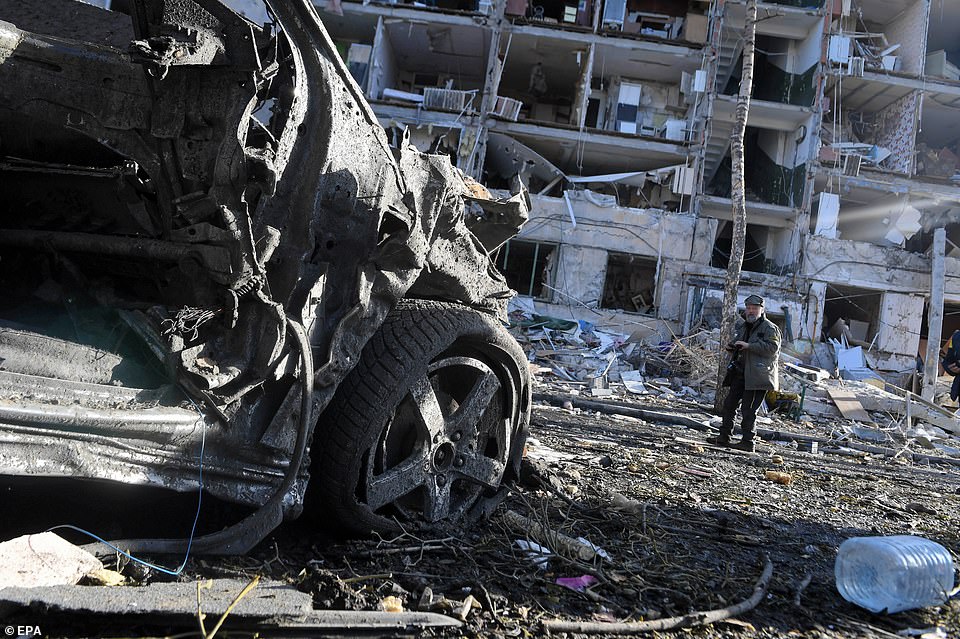 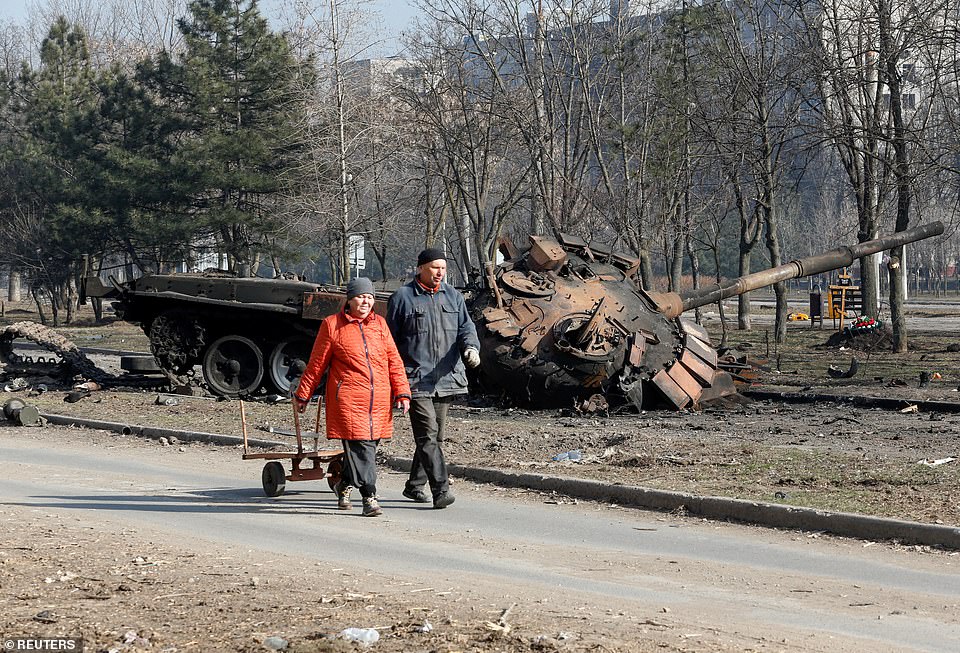 People walks past a tank destroyed in fighting during Ukraine-Russia conflict, in the besieged southern port of Mariupol

The video, shot by a fleeing passenger in what appeared to be a small van, showed apocalyptic scenes from the port city, which has ultimately been reduced to rubble after weeks of brutal Russian bombing.

Several corpses were seen sprawled in the middle of the road as the van swerved around chunks of rock, twisted pieces of metal and abandoned cars along what is believed to be Budivelnykiv Avenue in western Mariupol.

The chilling video comes as Ukrainian officials claimed that Russian troops are forcibly deporting Ukrainians en-masse from the city’s ruins to ‘filtration camps’ and then into Russia, as they begged for humanitarian teams to be given access to the besieged city.

Up to 15,000 civilians have been forcibly deported from the Left Bank area of Mariupol since it was captured by Russian troops, local authorities said on Thursday, as they warned an estimated 100,000 people who remain face a desperate plight without food, water or electricity.

Ukraine’s security services claimed to have identified one ‘filtration camp’ that had been established in the city of Dokuchaevsk, in the Donetsk region, and alleged Russian FSB officers were working to sort through the deported civilians to identify anyone with links to the Ukrainian emergency services or military.

Those picked out by the FSB are being send to remote regions in Russia – particularly Sakhalin, an island off the north coast of Japan – where they are forced to sign papers confining them to the region for at least the next two years, security services say.

Though Russian attacks have met with limited success elsewhere, Mariupol was fully surrounded early on during the fighting and has been attempting to hold out ever since.

Russia is now thought to be focusing it efforts on capturing the city, which would provide it with a ‘land corridor’ between rebel-held areas of the eastern Donbass region and occupied Crimea – believed to be one of Putin’s key strategic goals ahead of giving the order to invade.

In order to capture the city, Russian forces have been indiscriminately shelling it for weeks – leaving an estimated 90 per cent of buildings damaged despite hundreds of thousands of innocent people being trapped there.

Deputy Prime Minister Iryna Vereshchuk told a video briefing today that Ukrainian authorities were continuing efforts to secure agreement from Russia to open a safe corridor to and from Mariupol, but said that Russia had been blocking the evacuation of civilians this morning.

Zelensky said in a video address to Italy’s parliament on Tuesday that there was ‘nothing left’ in Mariupol after weeks of Russian bombardment.

A Reuters team that reached a Russian-controlled part of Mariupol on Sunday described a wasteland of charred apartment blocks and bodies wrapped in blankets lying by a road.

The head of the International Committee of the Red Cross said on Thursday that agreement between the Russian and Ukrainian armies was needed before civilians could be evacuated properly from Ukraine.

‘We think we are confronted with a very complex frontline at the present moment in Ukraine which sees a lot of people trapped and people caught people in between frontlines,’ Red Cross chief Peter Maurer told a news conference after talks with Russian Foreign Minister Sergei Lavrov in Moscow.

‘It’s not possible to think about access or evacuation, either in Mariupol or another place, if we don’t have a solid and detailed agreement between the militaries on the ground.’