Russia could use controversial military drills near NATO borders to stage a land grab similar to Vladimir Putin’s annexation of Crimea, Ukraine has warned.

Joint war games with pro-Kremlin Belarus could be a mask leading to Moscow forces without insignia trying to seize land in one of the West’s most vulnerable zones, Ukrainian officials fear.

Such a scenario could see a bid to grab territory in Poland and Lithuania – both in NATO – to connect the Russian exclave of Kaliningrad, on the Baltic Sea, with its ally Belarus.

Russia could use controversial military drills near NATO borders to stage a land grab similar to Vladimir Putin’s annexation of Crimea, Ukraine has warned 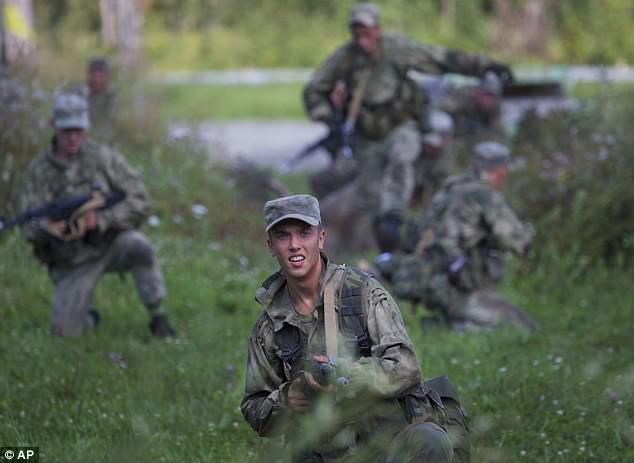 Joint war games with pro-Kremlin Belarus could be a mask leading to Moscow forces without insignia trying to seize land in one of the West’s most vulnerable zones, Ukrainian officials fear. Pictures show Russian soldiers during military drills east of Moscow in August

The fears were voiced by Ukrainian armed forces after NATO has demanded more military observers at the Zapad 2017 week-long military drills scheduled to start on September 14.

The war games are based on a Western attack on Belarussian and Russian forces from territory in Poland and Lithuania.

Moscow and Minsk say a total of 12,700 troops will take part in the exercises, but NATO fears the true figure will be 70,000 or more.

Today Belarus announced the bizarre fake names of countries that will make the supposed attack during the war games.

Veishnoria, Vesbaria and Lubenia will stage the attack on parts of Belarus for the purpose of the drills, said Belarus deputy defence minister Oleg Belokonev.

‘The core of the scenario is based on a crisis situation of an escalating conflict, linked to increased activity of illegal armed gangs as well as international separatist and terrorism organization that receive external support,’ he said.

He even unveiled a flag, passport, ID cards and the national currency of the fictitious Veishnoria – also spelled Viejsnoryjza – which covers part of present-day Belarus. 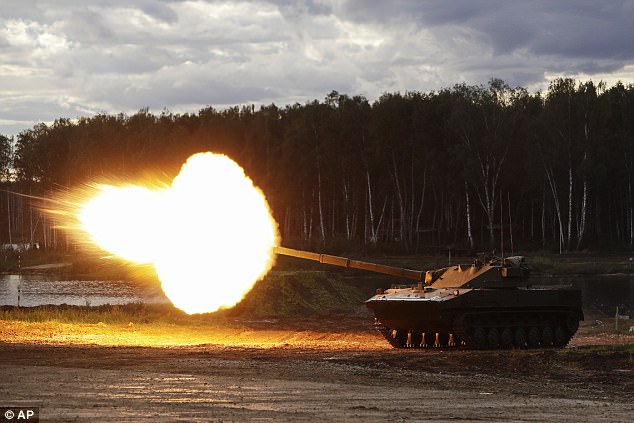 Social media fans immediately demanded citizenship for the mock country which already has its own T-shirts.

Vesbaria includes part of Lithuania and western and central Latvia.

This imaginary country includes the Suwalki Gap, a 65 miles stretch of Polish and Lithuanian land there which separates Belarus and Russia’s Kaliningrad Region.

NATO this year carried out an exercise on protecting this corridor.

But Kiev army chiefs claimed that for Russia it would be ‘quite easy to carry out an operation in this gap’ deploying forces without insignia to grab the territory.

Such tactics were controversially used by Moscow in Crimea – annexing the Black Sea peninsula in 2014 – and eastern Ukraine, also called Donbass.

Ukraine warned the West that Russian forces deploying in Belarus for the Zapad drills could remain behind. 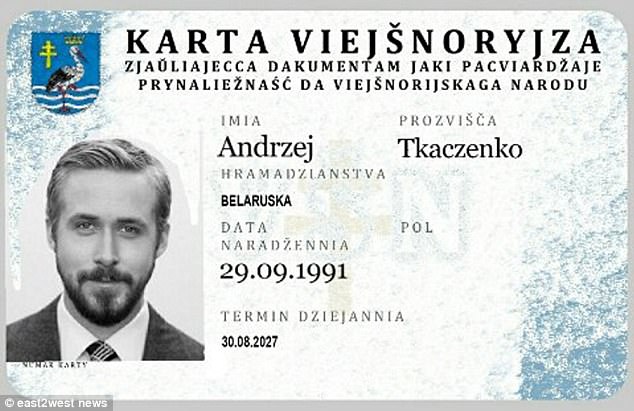 Belarus announced the bizarre fake names of countries that will make the supposed attack during the war games. They even unveiled a flag, passport (picture), ID cards and the national currency of the fictitious Veishnoria – also spelled Viejsnoryjza – which covers part of present-day Belarus

‘The distance is not big. This is Poland and Lithuania. And it is quite easy to carry out such an operation in this gap with ‘those who are not there” he added, referring to soldiers whose presence Russia denies.

‘This is what the developments in Crimea ad Donbass showed,’ he warned.

The alliance wants more observers at the exercises claiming the total number of troops will exceed 13,000.

This is a figure above which foreign countries have the right to monitor exercises under international agreements.

‘People are worried this is a Trojan horse,’ Ben Hodges, the commander of the US army in Europe, said last month of Zapad.

‘They say, ‘We’re just doing an exercise,’ and then all of a sudden they’ve moved all these people and capabilities somewhere.’

Putin has confirmed he will personally inspect the exercises alongside his Belarussian counterpart Alexander Lukashenko.

‘Our neighbours in the West have absolutely no reason to worry,’ he said.

‘All of our servicemen will return to their permanent bases after the events envisaged as part of the drills are over.’

This morning General Ben Hodges, the commander of US ground forces in Europe, called on Russia Friday to expand media access to its upcoming military exercises, adding that Moscow’s statements could not be trusted.

‘If the Russian Federation is truly interested in stability and security, then be transparent, invite media to see everything that they do,’ Hodges told reporters in Lithuania.

‘The Russians have not given us a lot of reason to trust the numbers that they say,’ Hodges said, echoing remarks by NATO chief Jens Stoltenberg.

The exercises in western Russia and Belarus have caused unease in Poland and the Baltic states, though Moscow has insisted that they will be ‘purely defensive’ in nature.

Earlier this week the United States sent extra jet fighters and a company of US Army troops to beef up its presence in Lithuania during the drills.

NATO has also deployed about 1,000 soldiers in each of the Baltic states and Poland in response to growing concern over Russian intentions after Moscow’s 2014 annexation of Crimea.

‘I feel confident in the deterrence capability that’s actually in this region. But we also have to always remain vigilant,’ Hodges said.

‘Being alert is the responsibility for all of our security services. But I don’t have a good record for predicting the future.’